This story is from a conservative website, but all I care about here is whether the data are accurate (I assume other places will vet them). After all, you’d never see an analysis like this in the liberal mainstream media, but the topic is of interest: the racialization of American politics and media. The data adduced tell us not so much about race, but rather about how the media manipulates the mention of race to push an ideological agenda. Click to read:

I noticed soon after the murder of George Floyd inflamed American racial tension that the media seemed to emphasize race in some instances and downplay it in others. My own experience involved reading about attacks on Jews in New York City, where the race of the apprehended was often omitted from the article (the accused were often black if you looked at other reports), but was mentioned when a white person attacked a person of color. But that was just my unsubstantiated impression, produced by my wondering who was going after the Jews.

Ideally, one wouldn’t need to mention the race of an offender in a news article, whether or not he (I’m assuming male suspects here) was convicted or only apprehended. What would be the point? For suspects at large, on the other hand, race is an identifying feature that could help apprehend criminals, and should be included in descriptions.

The media, however, often chooses to identify the race of “offenders” (apparently “suspects”, those not yet convicted). But as the Washington Free Beacon claims, data show that the race of black offenders is not only mentioned far less often than of white offenders, but when it is mentioned it appears much later in the news story.  That itself is evidence against structural anti-black racism in the news media, but it also shows something more: the media apparently use the mentions and placement to downplay crimes committed by blacks relative to those committed by whites. That is a choice that, the paper suggests, is made by the “MSM” (mainstream [liberal] media) to buttress a liberal antiracism by either minimizing black crime, maximizing white crime, or both (since we’re talking about differentials, we can’t tell for sure). The result is the same: differential treatment and, I think, more divisiveness.

A Washington Free Beacon review of hundreds of articles published by major papers over a span of two years finds that papers downplay the race of non-white offenders, mentioning their race much later in articles than they do for white offenders. These papers are also three to four times more likely to mention an offender’s race at all if he is white, a disparity that grew in the wake of George Floyd’s death in 2020 and the protests that followed.

The Free Beacon collected data on nearly 1,100 articles about homicides from six major papers, all written between 2019 and 2021. Those papers included the Chicago Tribune, Los Angeles Times, New York Times, Philadelphia Inquirer, San Francisco Chronicle, and Minneapolis’s Star-Tribune—representatives of each paper did not return requests for comment for this article. For each article, we collected the offender’s and victim’s name and race, and noted where in the article the offender’s race was mentioned, if at all.

They also controlled for high mentions of high-profile white offenders by eliminating them, but more on that later.

First, the data on when in a story the race of the offender is first mentioned: 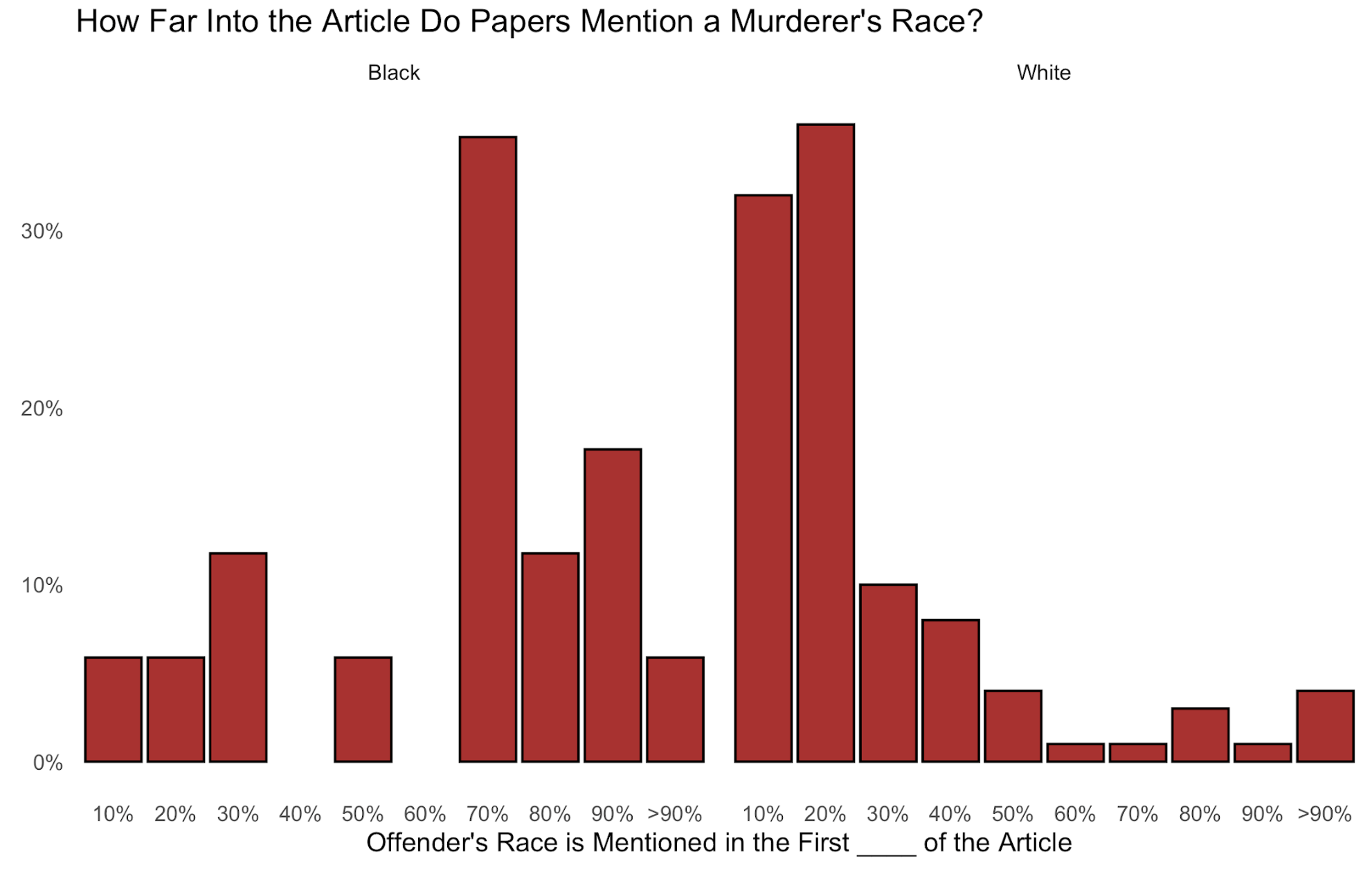 The chart above indicates that papers are far quicker to mention the race of white murderers than black. (Those two races account for 92 percent of mentions in the data, so others are not shown.) Half of articles about a white offender mention his race within the first 15 percent of the article. In articles about black offenders, by contrast, mentions come overwhelmingly toward the end of the piece. Half of the articles that mention a black offender’s race do not do so until at least 60 percent of the way through, and more than 20 percent save it until the last fifth of the article.

There follows an analysis of how often an offender’s race—again, only two are used: black and white—is mentioned in the article. Here’s a chart showing the results, but first the method:

To measure these choices, we identified the race of the offender in roughly 900 stories where his name, but not his race, was mentioned, first by looking at the race of people with the same name in Census data, and then hand-confirming race based on mug shots or other images published in local news stories.

The hand-confirmation is important given that people of different races can have the same name. The results? 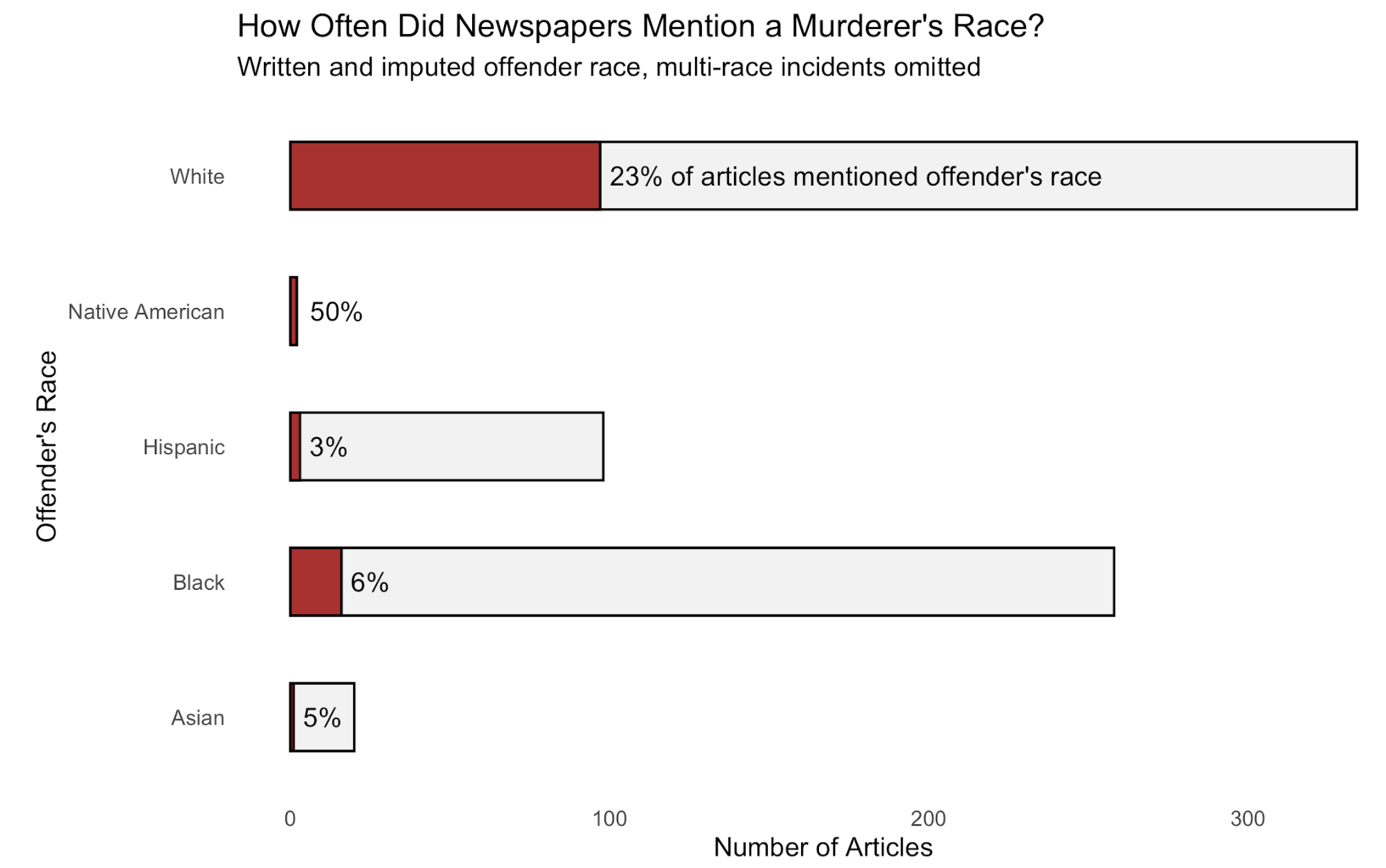 And the conclusion, as well as a caveat about oft-mentioned white offenders:

Again, the skew is startling: White offenders’ race was mentioned in roughly 1 out of every 4 articles, compared with 1 in 17 articles about a black offender and 1 in 33 articles about a Hispanic offender.

This effect is driven in part by a handful of major news stories involving white perpetrators, though the attention paid to these stories is also an editorial choice. But even after omitting reports about white offenders Kyle Rittenhouse, Derek Chauvin, and the killers of Ahmaud Arbery, the race of white offenders is mentioned in 16 percent of cases, two to three times the rate at which the race of black offenders is mentioned. (Middle Eastern offenders were labeled as Asian in this analysis, but labeling them as white results in only a small change to the race mention rate.)

. . .This disparity widened following George Floyd’s murder. Before May of 2020, papers were roughly twice as likely to mention the race of a white (13 percent of stories) versus a black perpetrator (7 percent). After May of 2020, the numbers were 28 percent and 4 percent, a ratio of seven to one. Even omitting the above-mentioned stories, papers still mentioned race in 23 percent of stories about white killers post-Floyd, a six-to-one ratio.

It could be that there were more stories in which a white offender’s race was relevant after Floyd’s death than before. But it is also easy to see how the increased attention to white murderers represents a change in what reporters and editors thought it was, and was not, important for their readers to hear about, particularly after they publicly committed to revamping their crime reporting following Floyd’s death.

Again, I’m guessing the differential in all cases would be statistically significant because the samples are large and the differences substantial. But newspapers don’t do statistics.

It would be interesting to see if newspapers of different political stripes have different data here, but since many of them draw their stories from the same wire services, I wouldn’t expect to find much of a difference.

There are several explanations for this disparity, of course, but the obvious one to me is that newspapers are downplaying crimes by black and playing up crimes by whites as part of a social justice agenda. (For similar reasons, papers like the New York Times capitalize “Black” as a race but not “white.”) This conclusion is supported by other things highlighted in the article:

Newspapers across the country—including the Inquirer—stopped publishing mugshot galleries in part because, two Florida newspapers wrote, they “may have reinforced negative stereotypes.” Others committed to overhauling their language, substituting phrases like “formerly incarcerated person” for “felon” to respond to what the Poynter Institute described as an “inextricabl[e]” link between reporting on crime and “race and racism.” And the Associated Press amended its style guide to discourage the use of the word “riot,” which allegedly has racist connotations.

If you control for high profile murders by whites, as the article did, the only explanation that makes sense is an ideological one.  (One might think that the race of the offender is useful for sociological analyses of crime, but that’s of interest mainly to sociologists.) And there’s no acceptable reason for the disparity. Either give the race of the offender all the time when it’s known, or leave it out all of the time unless crimes are racially motivated and that needs to be known as a potential social trend. And if you do mention race, the placement in the article should be the same for all races. If you really do think the race of an offender is relevant, why should it appear in different places in an article based on the race itself.

If the conclusion be correct, then newspapers, in the name of perpetrating social justice, are not only selectively reporting the news, but are actually increasing racial divisions in America.  If there’s anywhere that equality should and actually can be mandated, it’s in the way crime is reported.

In today’s guest essay in the NYT (click screenshot),  Margaret Renkl takes on the “race of perpetrator and victim” issue with respect to the recent kidnapping and murder of Memphis schoolteacher Eliza Fletcher, who is white, by the accused murderer, Cleotha Abston, who is black.

We need to work continually toward making our cities less dangerous and our criminal justice system more just. We need news coverage of everything — not just crime — to be completely accurate and completely fair, particularly on a subject as sensitive as race. God knows we need to find a way to make it safer for all women to move through the world at any time of day.

Any discussion of such subjects is bound to become heated, and that’s as it should be. Open public discourse is a privilege of living in a democracy. But while this kind of conversation is appropriate in a discussion of public policy, it is not at all appropriate in the discussion of an innocent person who lost her life to a seemingly random act of violence. Tragedies will always garner public interest. That’s just human nature. But tragedies should never be reduced to tweets and talking points or turned into a narrative to justify a political agenda.

47 thoughts on “When should the media mention the race of suspects or criminals?”