From the Morning Call, a Pennsylvania local newspaper, we get the heartening news of a program in which senior citizen get to adopt senior cats. One of the pairs is highlighted:

When Ken Johnson met his cat, Tully, it was “love at first sight.” Tully jumped out of his carrier, pounced onto Johnson, and nuzzled his furry gray head against his new owner’s equally furry chin — a warm start to a tender companionship.

Johnson, 72, was paired with Tully through the nonprofit Feline Urban Rehab and Rescue, which runs the Seniors 4 Seniors program, which started in 2020. The program serves older people who want to adopt cats but face financial obstacles.

Seniors 4 Seniors covers medical costs associated with owning an elderly cat, such as medications and trips to the vet.

“The biggest obstacle in the way of senior citizens adopting animals is typically the medical bills, so by us covering those bills, we allow seniors to get the love and benefits of having a feline companion without having to worry about unexpected costs,” Seniors program chair Heather Sweigert said.

For Johnson, a lifelong cat lover on a fixed Social Security income, this medical funding drew him to the program. He is also comforted by the fact that his cat is legally under FURR’s care, so that Tully will not have to return to a shelter if Johnson becomes unable to care for him.

Tully has made Johnson “the happiest [he’s] been in years,” he said. Johnson is an amputee who resides alone in Easton, and appreciates having his cat as a companion and a dependent.

“It’s nice to have another living creature that wants to be with me and relies on me,” Johnson said. “He gives me someone to care for and someone to care for me. He’s a gentle soul who’s gotten in the habit of sleeping next to me, which is wonderful, and then jumping on my chest to get me up in the morning. He’s just so affectionate.”

. . .According to Johnson, Tully was a perfect match for him. Johnson’s prosthetic causes him to move slowly, and as a 13-year-old (about 68 in cat years), Tully moves at a leisurely pace well suited to Johnson’s lifestyle. They are near the same age, and are both “vital” elders who suffer from medical difficulties.

“We have the same type of life, so that’s why we bonded,” Johnson said. “He’s my little buddy, and we have a great friendship.”

The article gives a link where you can apply for a cat. Applicants must be 62 or older, be able to afford food, water, and clean litter, be able to keep the cat indoors, and have the ability to take the cat to vet appointments.

This cheetah, which is apparently in Russia, is very tame, or else the ear-cleaner is very brave. Here, for your delectation, is an 8-minute video of Gerda having her ears cleaned.  The YouTube video says this:

Gerda is very relaxed about the ear cleaning procedure, even though it is a new and unfamiliar procedure to her. To be more exact Sasha already did it once, but until that moment she did not know what it is. She even seems to enjoy it)))

Listen her her purr!  I wonder how they keep their ears clean in the wild.

This BBC article, which I reproduce in its entirety below, tells about a nice Nottingham woman who adopts out “wobbly cat”: cats with birth defects that make them behave abnormally.  There’s a video in the article, and I’ll embed it from Facebook below. Click on the screenshot to read it and watch: 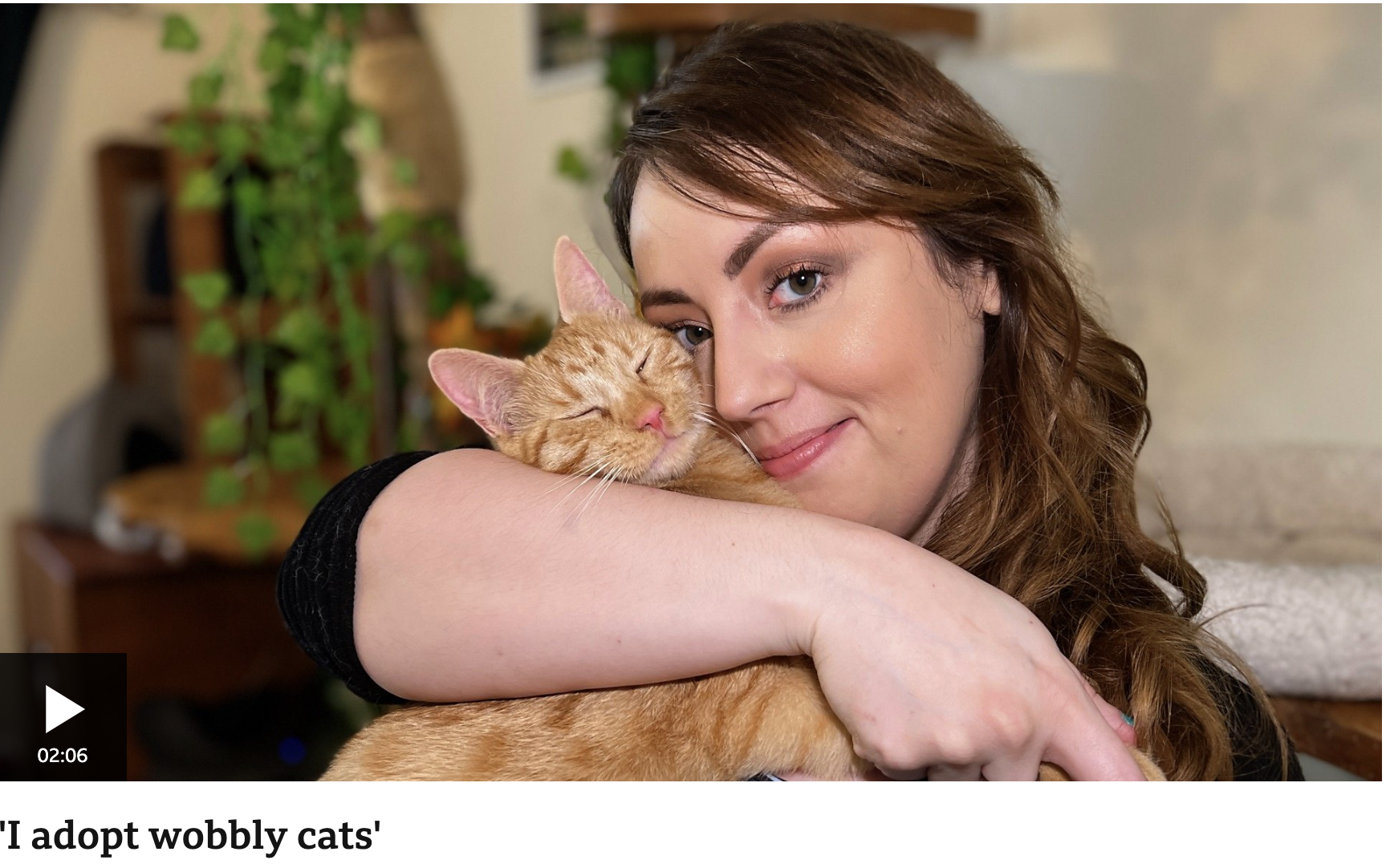 A woman who takes in disabled cats wants more people to consider adopting them.

Holly Brockwell runs a shelter for disabled or unwanted felines at her home in West Bridgford, Nottinghamshire.

Many of the cats she adopts have cerebellar hypoplasia, also known as wobbly cat syndrome, which is a neurological condition caused by infection before birth.

Holly, who has numerous health conditions, said: “I really sympathise with the cats and what they’re going through. I feel like I’m one of them.”

Lagniappe: Cats in one German town were locked down was done to protect the locally rare rare crested lark, of which there are a few pairs in town, but the restrictions were lifted after the breeding season. Because young birds are vulnerable, they may impose lockdowns again next spring. Click to read: 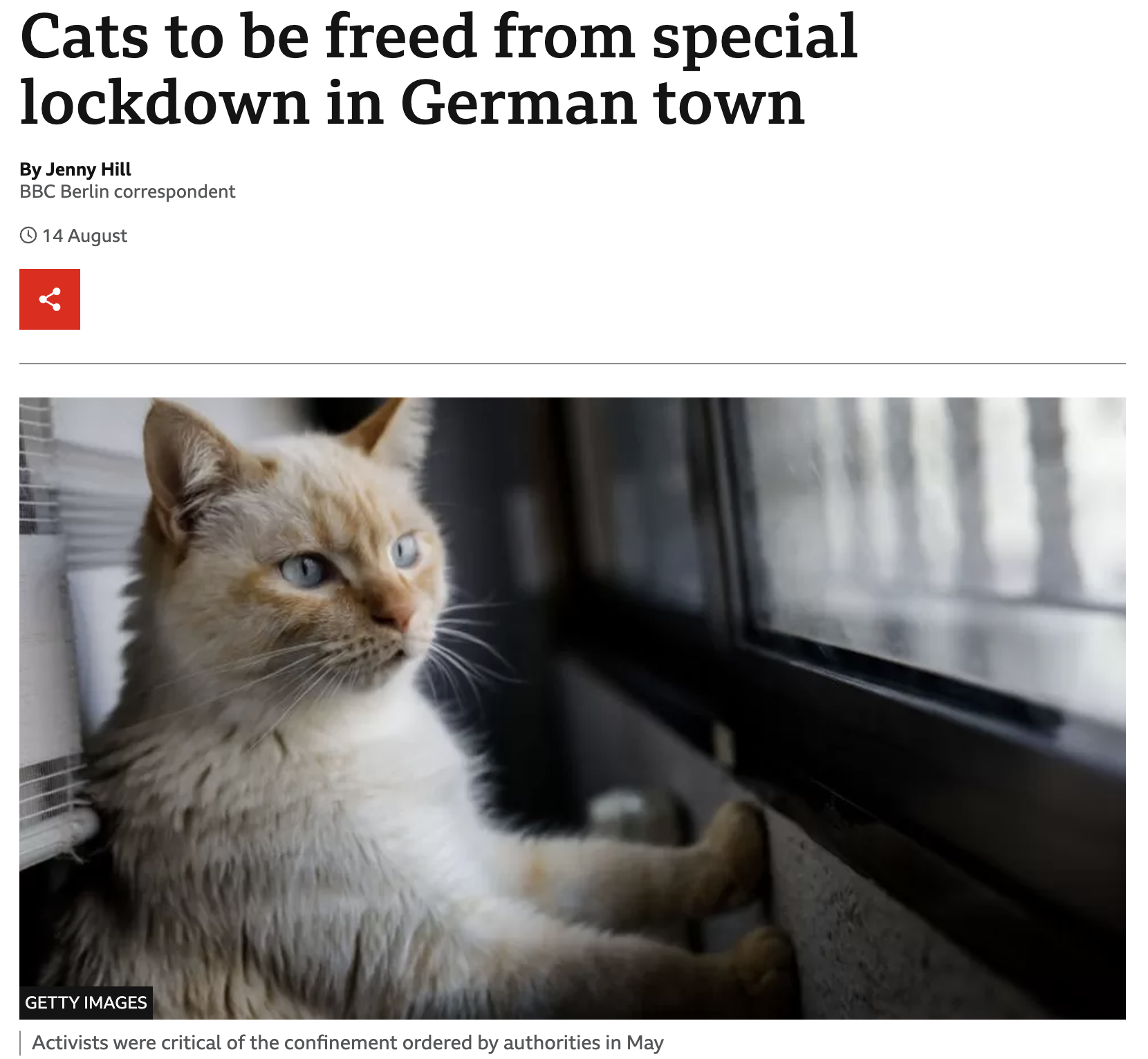 People in Walldorf, in the south-west, were ordered in May to keep their cats indoors to protect an endangered bird.

Cats were only allowed to venture outside if they were kept on a leash no more than two metres (6ft) in length.

But the animals will again be allowed to roam free from 00:01 local time on Monday.

If a cat escaped while the lockdown was in force, owners were told to call a special hotline, then find and detain the offending feline.

Authorities had been attempting to protect the local population of the crested lark, saying the species was endangered in the state of Baden-Württemberg, and wider Germany.

They said there were just three breeding pairs left in Walldorf itself. 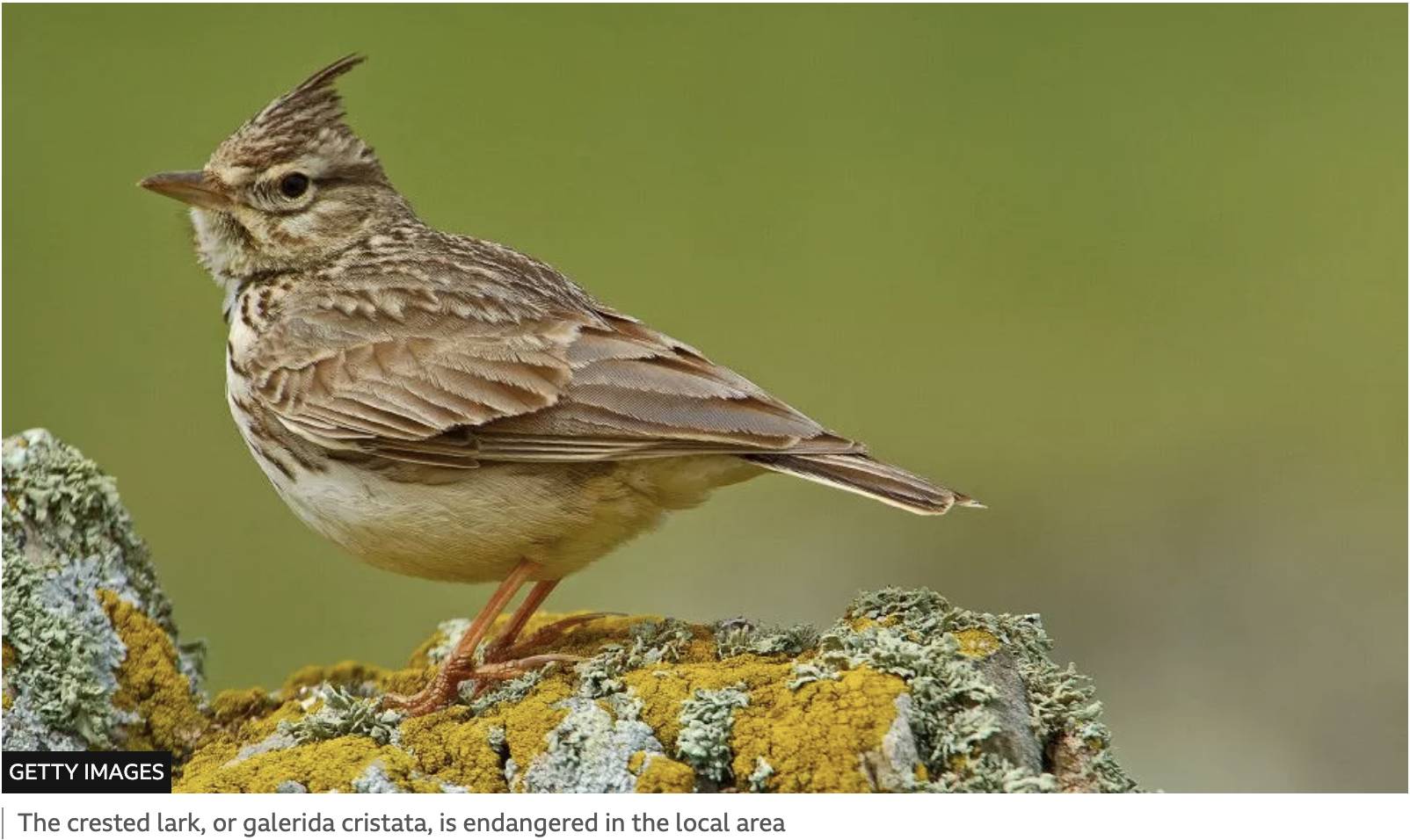