Tish Harrison Warren may be the lowest-hanging fruit in the New York Times op-ed section, but what I wonder is why the paper wants low-hanging fruit. At some point, a NYT executive must have thought, “Hey, we need religion to draw more readers—but not that old-timey, fundamentalist religion. We need a more Sophisticated form of faith from someone who can offer balm to our readers without making explicit and foolish statements about faith and its verities.”

And so they hired Anglican Priest Tish Harrison Warren. She surely fills the bill, doling out bromides and anodyne sermons every Sunday. In fact, her tendency to equivocate about her beliefs while trying to console semi-secular readers often gets her into the marshy hinterlands of theology. Her column this week is about why Uvalde, Texas, site of the latest mass school shooting, must have its prayers.

The answer to Tish Harrison Warren’s question below is “Definitely!” What is maddening is her absolute refusal to discuss whether prayers actually work. That is, are they heard and acted on by God, or do they simply act as an aid to comfort and meditation?  I’m pretty sure, knowing what she’s written previously, that she thinks God really is Up There with an ear cocked, and heeds the importuning of his flock. But that raises a second question, which she also ignores: “Why did God let Salvador Ramos kill 19 innocent people and two good teachers?” Was this necessary to allow Ramos to have free will? (She’d probably say “God’s ways are mysterious”, in which case I’d respond, “Well, if you know so little about God, shouldn’t you stop extolling Him?”)

Read for yourself by clicking on the screenshot: 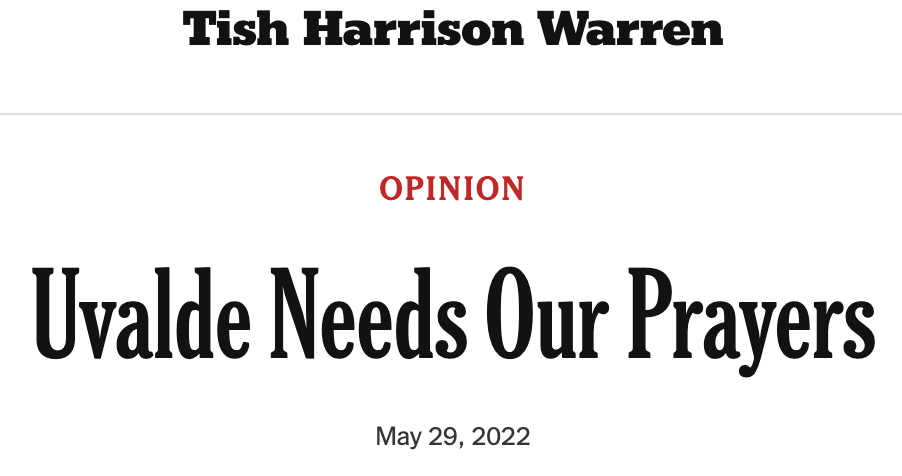 Warren and sixteen other clergy convened in Uvalde soon after the murders, though it’s not clear whether they were invited or simply hied themselves to the town to offer their spiritual wares.

After paying proper lip service to the fact that the “thoughts and prayers” trope is foolish, Warren nevertheless goes on to clearly imply that prayers are more than just helpful aids to meditation, but serve as a form of social glue. And indeed, I have no objection to people believing foolish things if it offers them group comfort—so long as they don’t impose that view on others. As Christopher Hitchens said (see below).

This short clip is well worth watching.

Now Hitchens is talking more about clerical “bullying and intervention” than peace and the solace of the tribe, but Warren’s columns in the NYT are surely intended to proselytize and intervene, promulgating the falsity of religious faith.  She doesn’t write just for herself! And indoctrinating children in that faith—even urging them to participate in prayer—is surely a form of child abuse.

In fact, Harrison definitely implies that prayers for the dead in Ulvade are somehow helpful in fixing stuff. She quotes other pastors:

Sam Garza, a pastor and youth worker at First United Methodist Church, told me, “If people just say ‘thoughts and prayers’ or put something like that in their Facebook” profile and then don’t give another thought to Uvalde, then, he said, “that’s not helpful.” But he says, prayer spurs action. “In prayer, we find needs,” he said. If people pray that “Aunt Tilly’s transmission” needs to be repaired, he prays for that, but then, he said, “we also need to help her with her transmission”: to find and pay for a mechanic.

Yes, but does prayer really spur action among those (even believers) who don’t pray, or is the act itself form an impediment to action? It may well be that those who pray indeed do more to help control guns than those who don’t (I find that unlikely; the opposite is probably the case), but there’s an uncontrolled factor here: the personal qualities of those who pray. At any rate, given that the biggest opponents of gun control in the U.S. are those most likely to pray, I find the discussion disingenuous.

Here’s an experiment: for a group whose transmissions have crapped out, have four groups of people as an experiment (this is similar to the heart study described here):

I’m guessing that the results of the third and fourth group would not only be the sole efficacious ones, but wouldn’t differ in the rate of fixed transmissions. After all, experiments show that intercessory prayer simply doesn’t work in accomplishing what’s prayed for, though it acts as a form of solace and a source of community for many. It also, as we see clearly in America right now, acts as a form of division and an inspiration to hate and ostracize others. Prayer is a psychological technique, not a way to ask for divine help.

And this is another problem with Warren’s latest screed: she echoes another pastor from Texas who says, “The church should stay out of politics.” Well, yes, it must if it’s to reap its tax advantages, but what happened in Texas won’t be fixed—or helped—by a bunch of prayers. Political will and action is what is needed. Which would you prefer: a bunch of liberal Christians praying for the shootings to end, or a bunch of liberal citizens working on gun reform? I guarantee that the latter will work just as well without the former.

Here’s what the Texas group prayed about, which brings up the last question:

Then [local Baptist preacher] Gruben opened the floor for anyone to pray. The prayers kept coming and coming. The pastors prayed together for around 40 minutes, many weeping. They prayed for comfort. They prayed to be filled “with love, compassion and grace.” One prayed, “Let us know when to speak and when to be silent.” Many chimed in, “Yes, Lord.” “We pray for the peace of our city.” “Comfort the brokenhearted.” “There is not one thing that has happened that has shaken your throne.”

WHAT?  Not shaken his throne? The throne is not only shaken, it’s battered to pieces! What has happened is that God allowed 21 people (19 of them morally innocent children) to be butchered by a shooter.  Does this not raise questions about the nature and beneficence of God? Of course it does, but the cognitively impaired ignore them. The solution, say the believers, is not gun control, but Jesus—presumably a prerequisite for gun control. As Warren writes:

I asked Barboza, “Do we need better gun control?” He replied, “We need Jesus.” It is “the presence of God that changes hearts,” he said.

. . .Right after we talked, a couple named Pam and David Wong approached the police line, holding a large green wooden cross. They wove their way through throngs of media people, trying to find a spot to place it. A law enforcement officer took the cross and laid it in front of the school sign.

The Wongs are volunteers at a church in Conroe, a town five hours away. Their church works with homeless people, giving them dorm space in the church building. They told me that formerly homeless men made the cross. On the back was a message for the community of Uvalde, explaining that the cross was meant to be “a reminder that Jesus cares and loves you all very much. We are all praying for you.” Pam Wong told me they had driven to the school because “we wanted them to know that they are not alone.”

Now that’s very strange. It is the very people who tout their God most strongly who impede moral reform: the people who stalled the Civil Rights Movement and gay liberation (and now abortion, which Warren opposes). God was there the whole time since the 1960s, but hearts were changed not by an imperceptible deity, but but secular realization that equal treatment of people mandates civil and gay rights. (See Steve Pinker’s last two big books.) And didn’t God start effecting this change before slavery? Why did God allow millions of Africans to be dragged into horrible servitude? Was that his divine plan?

Well, if you’re open-minded, the evidence at hand suggests that God does not “love you very much”. After all, by not lifting his hand, he brought unspeakable tragedy to 21 people and unspeakable grief to their loved ones. Not to mention the unvoiced grief of millions of enslaved people.

I needn’t go on, for the low-hanging fruit has been plucked. At the end of Warren’s confusing and poorly written but well intended piece, she reaffirms that although many things are contradictory and confusing, the power of prayer is not:

Uvalde is grieving and heartbroken. Some want a revival. Some want mental health services. Some want gun control. But every single person I talked to agreed on one thing: They could use your thoughts and prayers.

I don’t think she talked to everyone in Uvalde.