The annual “Evolution Meeting” is taking place next month in Cleveland, and each year it gets woker: there is less emphasis on science and more on “harm”, “safety” and the oppression narrative. This year the meeting is a tripartite gathering of members from three evolution-related societies: the American Society of Naturalists, the Society for the Study of Evolution, and the Society of Systematic Biologists. You can see the website here, and try perusing it a bit. What you won’t see is the names of prizes that have been dropped because the famous scientists once being honored were found to be flawed.

Call me an old grouch, but in my view the organizers are consciously turning societies devoted to the promotion of science into organizations devoted to the promotion of social change. Yes, organizations should not discriminate against any class of people so long as they’re qualified to give talks or attend meetings, but it’s another thing entirely for a meeting to promote equity on the grounds that science is structurally racist. In fact, I think scientific societies should remain politically neutral while obeying any anti-discrimination laws. Effecting social change should be the purview of individual members of societies, as different members have different views (I know a lot of people who object to the fulminating wokeness of evolution societies.)

Whlle perusing the long list of diversity initiatives (14 of them), guaranteed to bring people together by separating them, I found this one: 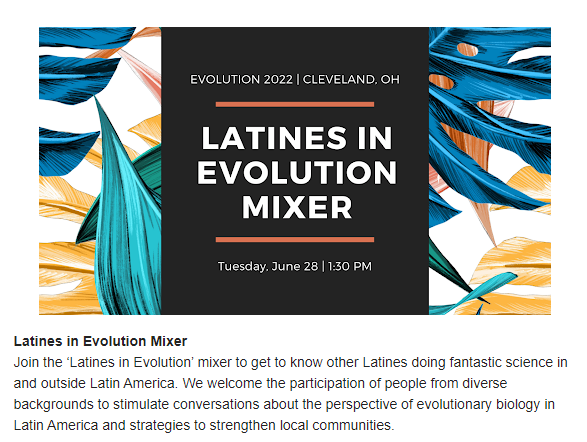 Latines? What happened to “Latinx”, itself created to avoid gendering an ethnic group as well as not to offend LGBTQ Latinxes? Recall that “Latinx” was itself a term imposed on several (and diverse) ethnic groups by largely woke white people trying to demonstrate their compassion and virtue.  Most members of the Latina(o) community spurn the term:

Despite its increasingly frequent use, a Gallup poll claims only 5% of Hispanic Americans prefer the term “Latinx.” In contrast, 37% preferred the usage of “Latino,” and 57% preferred “Hispanic.”

Aren’t we supposed to call a group what they want to be called? So why not “Hispanic”? And where the deuce did “Latine” come from? The Tulane Hullabaloo explains:

These numbers beg the question, why can Hispanic not be used when referring to this specific ethnic subgroup?

Essentially, the two terms are not exactly synonyms. “Hispanic” typically refers to someone from a Spanish-speaking region, while “Latino” typically refers to people of Latin American descent. A Portuguese-speaking Brazilian man would not be Hispanic, but he would be Latino. A woman from Spain would be Hispanic, but not Latina. Despite the two terms describing large and often overlapping groups, the term “Latino” includes people that “Hispanic” does not — similar to how “African American” refers to fewer people than “Black person” does.

Got that? Now you can ignore it, because everybody knows that the regular use of “Hispanic” lumps these two groups together.

But what is this “Latine”? Get ready—it’s even woker than “Latinx”, and is again a term promoted by woke non-Hispanics to make up for the fact that they realized that the term “Latinx” could cause harm.

The criticism “Latinx” faces is not for it being more inclusive, even harsh critics of the term acknowledge that it stems from good intent. Instead, some believe it is the anglicisation of a term that does not belong to English speakers — an effort to impose their ideals onto a language with entirely different rules.

While it was created with good intentions, “Latinx” is not made for Spanish speakers. Some people just see “Latinx” as a “White thing.” The kind of term that gets used in academics, but not at taquerias. If that is the chief issue, then input from Spanish speakers, particularly under the Latino umbrella, would be the key to making a term that both satisfies Spanish speakers and includes marginalized groups. Fortunately, such a term exists: “Latine.”

You don’t hear “Latine” at taquerias, either! But I digress:

“Latine” offers a more organic alternative to “Latinx.” On the surface, Latine and Latinx may strike readers as synonyms. Both terms are designed to be more inclusive than their gendered parents, specifically in reference to nonbinary people, and both terms are relatively new. So what justifies the use of the younger, less popular “Latine?”

Latine fills the void in a way Latinx never could, mostly because it was designed to work with the Spanish language. It is not an insertion; it is an evolution. A natural progression from gendered terms to neutral ones. As such, Latine can be pronounced and conjugated in Spanish, while “Latinx” cannot.

Any bets whether Hispanic Americans are going to proudly proclaim themselves as “Latines”?

I also found the event below, apparently based on the title of a book by Joan Roughgarden that I reviewed (critically) in the Times Literary Supplement of 2004 (email me for a copy of the review as it’s no longer online). Roughgarden, who had recently become a trans woman, made the case in her book that the diversity of sexuality in nature justifies human sexuality other than the “cis” form, and at any rate should erase our opprobrium towards members of the LGBTQ+ community. But this is an example of the “naturalistic fallacy”: we needn’t—and shouldn’t—see how animals express sexuality to inform our own morality towards those with different sexual expression. Here’s a screenshot of one paragraph from my review: 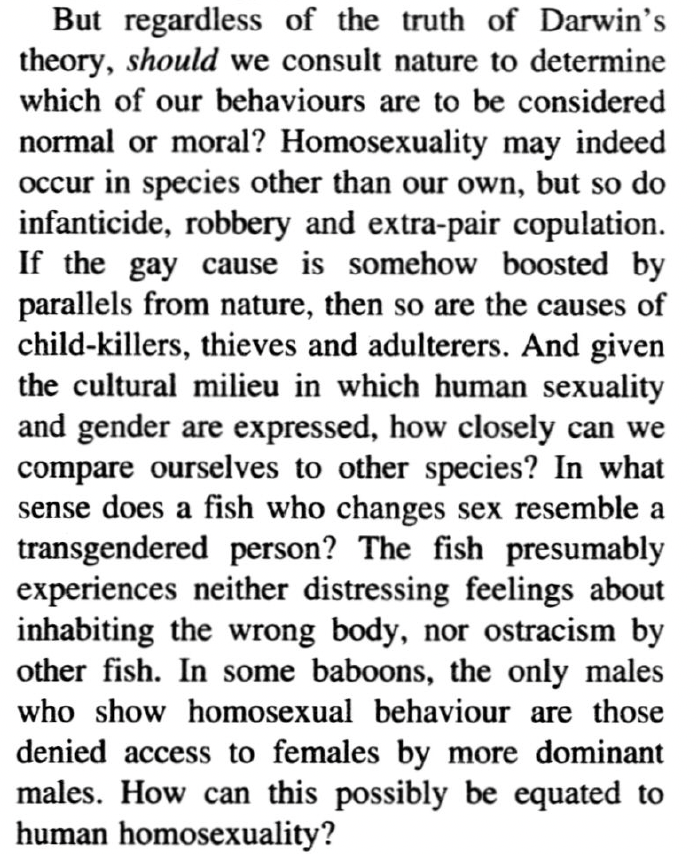 The event below, bearing the title of Roughgarden’s book, looks to me like the same kind of stuff: a romp through the diverse sexuality of animal species with the express aim of “supporting and retaining our LGBTQ+ students and colleagues.”  But the diversity of sexuality in nature is completely irrelevant to that aim: people of different sexual preferences, genders, and so on, should be treated as moral equals on the simple grounds that they are fellow humans and such equality is a boon to society.  I find it bizarre that this event (which costs $5 extra) is being given, assuming its aim is what they say it  is: 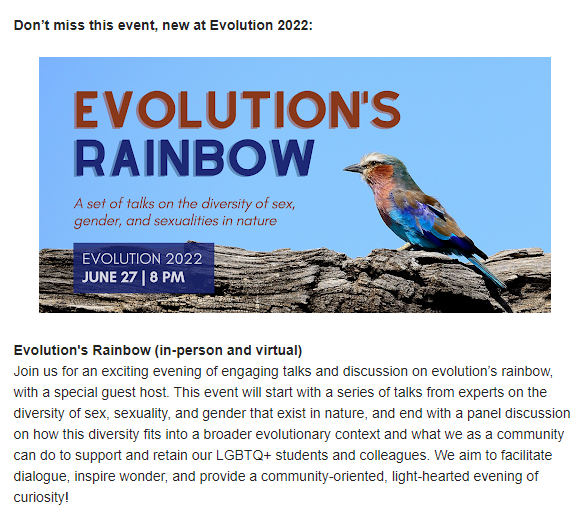 27 thoughts on “The annual evolution meeting raises some questions”