You’d have to be a long-time reader of this site to remember the story of my interaction with Eric Hedin, a physicist at Ball State University (a public college) in Muncie, Indiana. It’s recounted in many posts here going back 2013 (see here and here, for instance).

In short, Hedin, a deeply religious Christian, couldn’t bring himself to leave God out of his non-major’s honors course at Ball State: “The Boundaries of Science”. I got hold of his syllabus, did some investigation, and realized that Hedin was teaching his students a form of Intelligent Design in a public university.  Much of the course was directed, as the title suggests, at showing why phenomena in nature could not be explained by science, naturalism, or materialism—implying that a supernatural God was responsible.

Now the 2005 case of Kitzmiller v. Dover, argued in a federal district court in Pennsylvania, ended in a ruling by John Jones (a Republican judge!) that intelligent design, being taught in the school, was “not science”. ID was instead, ruled Jones, a disguised form of religion whose teaching violated the First Amendment.

On December 20, 2005, Jones issued his 139-page findings of fact and decision ruling that the Dover mandate requiring the statement to be read in class was unconstitutional. The ruling concluded that intelligent design is not science, and permanently barred the board from requiring teachers to denigrate or disparage the scientific theory of evolution, and from requiring ID to be taught as an alternative theory.

Another happy ending: all eight of the school board members who had approved the use of an ID textbook in the Dover High School lost their election bids to candidates who opposed the teaching of ID. Further, the Dover Area School district had to pay over a million dollars in fines. Faced with similar outcomes and bankrupting of schools, no more cases like this were adjudicated. The defendants indicated they would not appeal, and since then teaching ID in public schools has been a legal no-no.

So, eight years later, when I saw that Hedin was teaching ID at a state University, I wrote to his chairman (and, as I recall, his colleagues), calling attention to this violation. I was blown off, but then the Freedom from Religion Foundation (FFRF) got involved (Ceiling Cat bless them). Note that at no time did I call for Hedin’s firing or desired to damage his career; I simply wanted the school to stop teaching creationism as a form of science.

The FFRF wrote one of its official (and implicitly threatening) letters to the President and officials of Ball State, them that Hedin’s course was violating the Constitution. The President launched an investigation, and it transpired that Hedin was ordered to stop teaching that course. A rare victory for good science!

Hedin was later promoted to associate professor, a promotion I supported so long as he didn’t drag religion into his teaching. Still, he beefed all the while that he, a “young assistant professor”, had been hounded and harassed by the likes of an established professor (me) and the FFRF.

Hedin eventually gave up his job at Ball State and moved to teaching physics at Biola University in Los Angeles (the name comes from its former one: The Bible Institute of Los Angeles). There he apparently found a congenial niche, since it’s a private religious school and he can drag God and Jesus into any science course he wants. (I weep for the poor students subjected to this nonsense.)

Then Hedin went public with his “story”—the story of how a assistant professor just trying to do his job was canceled by the FFRF and a well- known professor. The implication was that the FFRF and I were trying to destroy Hedin—to “cancel” a man.

But he wasn’t canceled—his course was. The man was promoted, for crying out loud!

Hedin recently published a whole book about this dustup: Canceled Science: What Some Atheists Don’t Want You to See, published in February of 2021 by the Discovery Institute (presumably no reputable publisher wanted it). It didn’t sell very well, hardly got any reviews, and is way down there in the rankings of creationist books, many of which have sold well in the past (e.g. Darwin’s Black Box, and Signature in the Cell; the books, I suspect, are snapped up by the many anti-evolution and religious Americans who seek confirmation of their views).

I also suspect that the poor sales and lack of reviews of Canceled Science are the reason that the Discovery Institute continues to flog the book on its website (e.g., see here, and here), at the same time denigrating the FFRF and me for trying to “cancel” Hedin. I have to laugh when I see this campaign; nobody got canceled, for it was all about the separation of church and state. But it’s too late for Hedin to beef, as nobody’s interested, and his 15 minutes of fame are up. 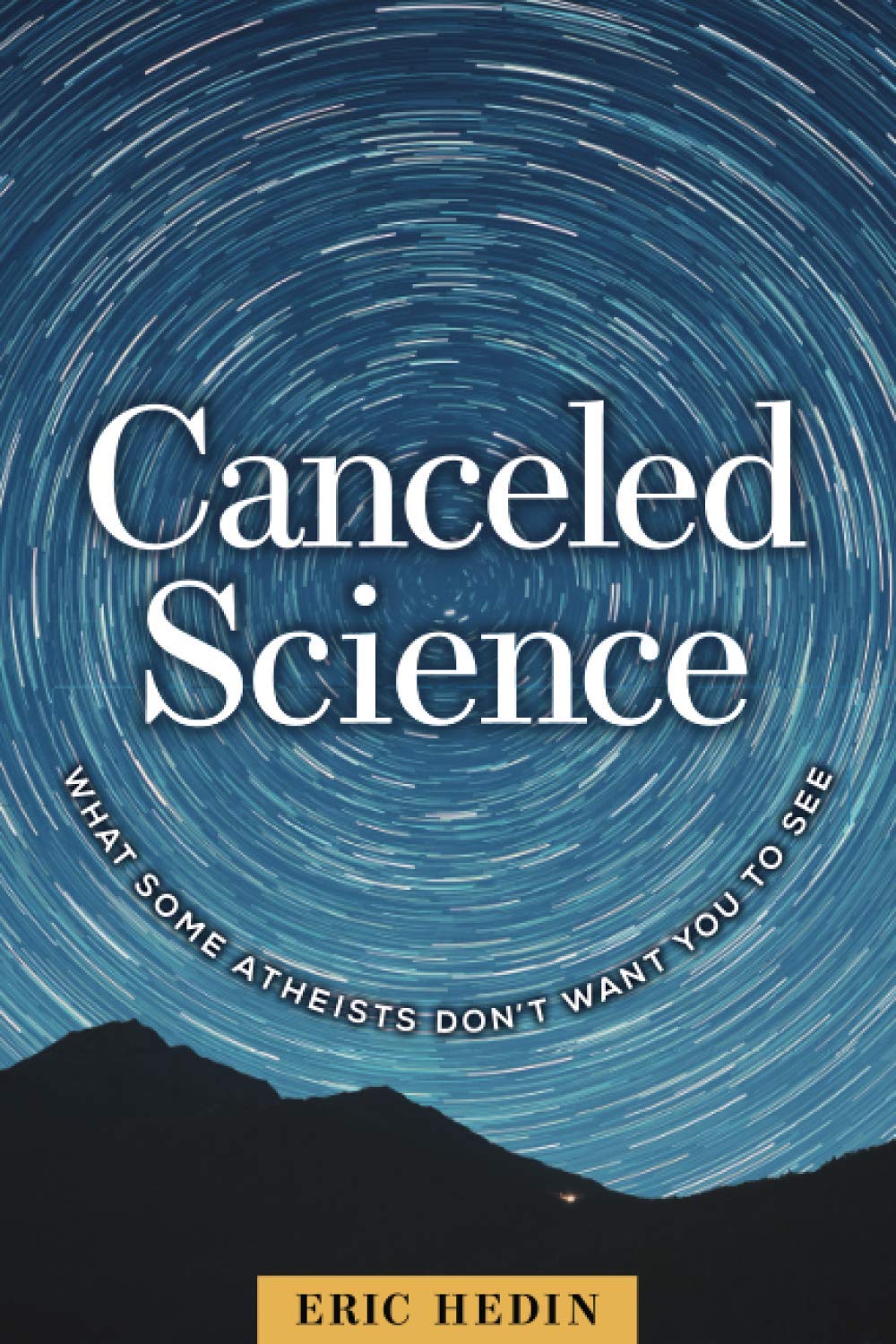 Recently, the Discovery Institute taped a 45-minute lecture by Hedin on his book and his persecution (he sees himself in the tradition of Christian martyrs tortured for their faith), and I put the video below. Its YouTube notes:

Eric Hedin, author of Canceled Science, explains how he was canceled by the scientific establishment and reflects on the lessons he learned during the experience. He also discusses scientific evidence which points to a Creator. This talk was presented at the 2022 Dallas Conference on Science and Faith in January 2022.

You can listen to it if you want, though the “evidence” for ID, filtered through a physicist rather than a biologist, is even more risible than usual. The reason I’m putting it up is because reader Beth sent me the video link adding, “Eric Hedin drew a cartoon for you, showing you with a cat being invited by Jesus to “come Home” (22:47 in the video).”  Now how could I resist that?

Actually, it was Hedin’s wife who drew the cartoon, as a “picture for Jerry Coyne” as well as “offer of forgiveness” for me (in good Christian tradition, Hedin forgives all of us who “persecuted” him). And the cartoon is below, captured from a screenshot of a slide: 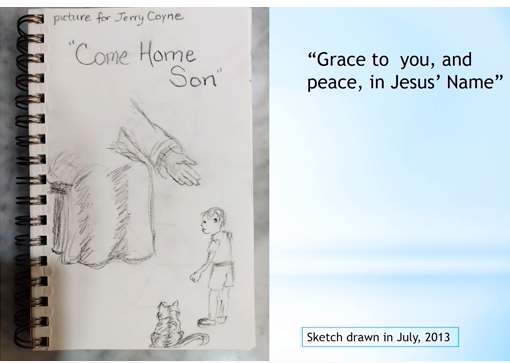 LOL! Well, I’m sorry, Mr. and Mrs. Hedin, but I ain’t coming home to Jesus, and neither is any cat: it’s well known that all cats are atheists.

Now that you’ve seen that, you may, if you wish, listen to Hedin’s talk, heavily larded with references to God, Jesus, and the Bible. (As I said, he’s found a good home at Biola.)

If you want to skip the self-serving and humble beginning, I’d listen to the last 20 minutes, beginning at 24:40 (before The Picture), and listen to Hedin tick off the things that science can’t ever explain and therefore prove Jesus.

Here are a few of Hedin’s “failures of naturalism”:

I won’t waste my time rebutting this all in detail; Google is your friend here. All I can say is that, as a physicist, he makes a damn poor critic of evolutionary biology. Years ago I wrote a critique of ID, “The case against Intelligent Design,” which appeared in the New Republic and is now reprinted on the Brockman Edge site. If you want my views on ID, see that.

One of the most telling statements by Hedin occurs at the end of his talk, when he confesses that his Christianity is based not on evidence, but on “faith”, euphemistically called “the witness of the spirit”:

“I’ve written a lot more about evidence for design in my book and I’ve even made the connection with my own faith there. I believe that what we see in nature can strengthen our faith, but that my faith is really based is really based on my relationship with God: through the witness of the Spirit in my inner being.”

So, ladies and gentlemen, brothers and sisters, comrades and friends, here’s the video of Dr. Hedin, a man of soft manner and amiability, showing how he’s become the modern equivalent of Christians thrown to the lions. (I’ve recently read, however, that the Roman scenario of lions and Christians is false.)

Start 24 minutes in, and then you have to listen for only 20 minutes:

18 thoughts on “Eric Hedin beefs about being “canceled” at Ball State by the FFRF and me, but forgives me, showing a cat leading me to Jesus!”