I would have guessed that the world’s Wokest university would be—given what I know about North American and British universities—The Evergreen State College. But I know almost nothing about the ideologies pervading schools in other countries, especially Africa, Asia, and South America.  From Grania I knew about the “decolonization” movement against science at The University of Cape Town in South Africa (henceforth UCT), a city I’ve always wanted to visit (Grania lived and went to school there). But lately I’ve heard little, for Americans are a parochial people and tend to ignore what happens in other places. This article from Quillette, however, makes the case that no university in the entire world is more “progressive”—and by “progressive,” author David Benatar. means “woke”—then The University of Cape Town.

You may have heard of Benatar before: he’s a South African philosopher—in fact, used to be the head of the Department of Philosophy at the very university he decries.[A commenter below has noted that Benatar probably resigned the chairmanship in 2021.] Benatar also wrote a controversial book called Better Never to Have Been: The Harm of Coming into Existence, which makes the case that producing more human beings creates greater harm, for the very fact of existing is a harm. He is thus an “antinatalist.”

Benatar is the son of Solomon Benatar, a global-health expert who founded the Bioethics Centre at the University of Cape Town. Not much is known about Benatar’s personal life as he deliberately guards his privacy. He has held antinatalist views since his childhood.

If he didn’t guard his privacy, he’d probably be killed (see the video he includes with his article.) In fact, there appears to be only one photo on the Internet, but as reader “NG” tells us in the comments below, it’s not Benatar. 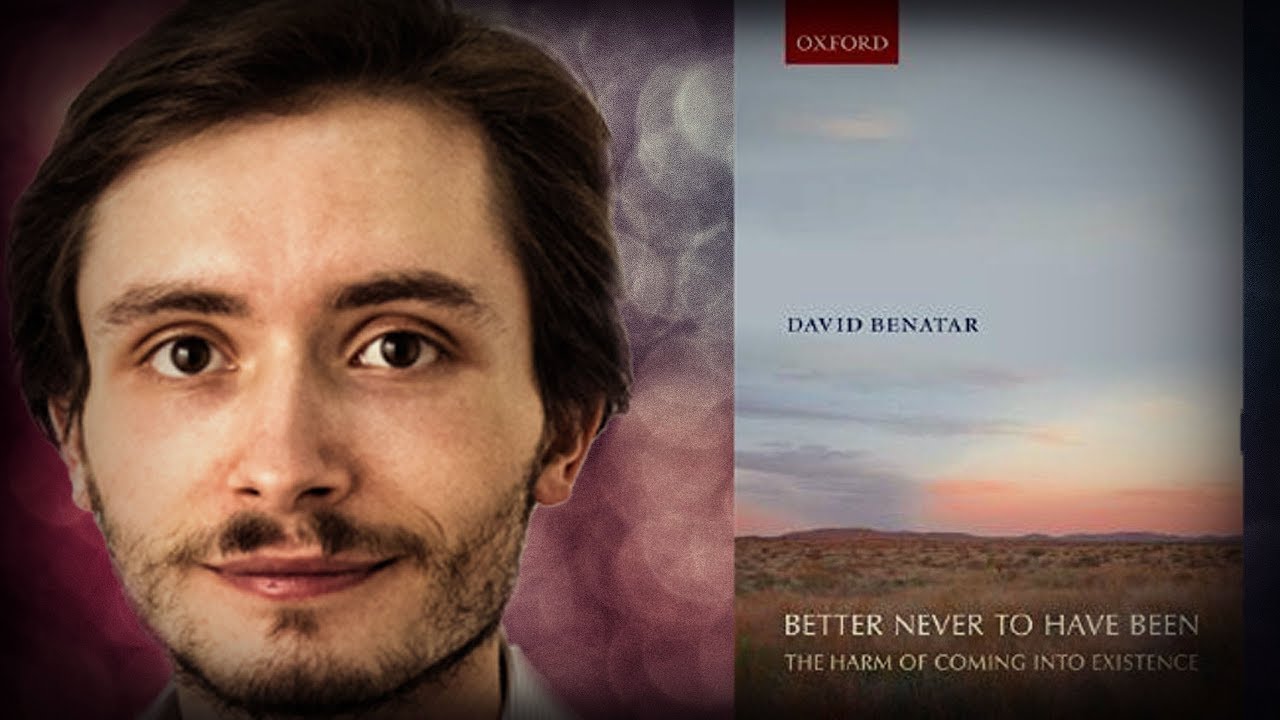 We’ll leave biography aside, though, for here we have a rare case of a well known professor in a good university criticizing that university publicly. And what he says is horrifying. 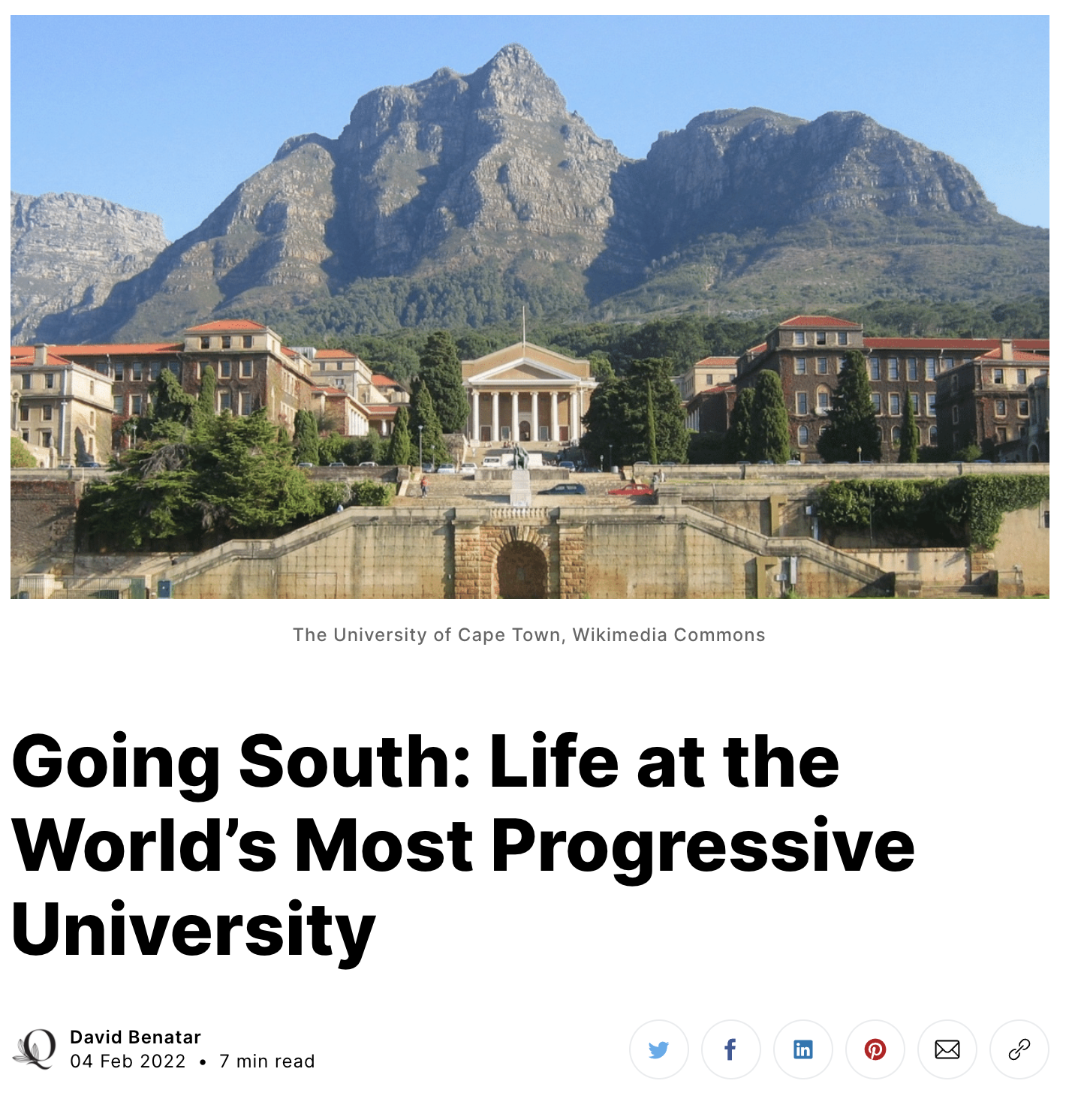 According to Benatar, the University is rife with bullying and unfounded accusations of racism, many of them by black students against black students. There is deplatforming, harassment, and even suicide caused by the climate of entitlement and the students’ aspirations to “decolonize” everything.  The behavior of some people is even criminal, but UCT overlooks it. The downfall began when UCT started capitulating to student demands and bad behavior around 2015.

Why is this happening? An obsession with race drives much of this, and Benatar describes why:

Post-apartheid South Africa remains obsessed with race. Technically, nobody is racially classified by the state any longer, but the implementation of extensive racial preference legislation presupposes continued acceptance of those categories. So, while people are not officially categorized by race, they are in practice, sometimes against their will. Racial preferences in South Africa have acquired two distinctive features that distinguish them from the forms of affirmative action common in, for example, North America.

Second, the beneficiaries of South African racial preferences constitute a large majority of the population and of students at the University of Cape Town. Blacks are not yet a majority of the academic staff, but it was always going to be difficult to get the demographics of the professoriate to reflect the demographics of the country after hundreds of years of anti-black racism. This has become an even more challenging task because the quality of primary and secondary schooling has declined since the advent of democracy.

Benatar has written a book about this, which he mentions when he starts listing some of the lunacy inflicting UCT:

In my book, The Fall of the University of Cape Town, I offer a detailed account of what has been happening at (and to) Africa’s leading university since the #FeesMustFall protests began in October 2015. On multiple occasions in 2015, 2016, and 2017, the university was shut down for weeks at a time by a relatively small group of activist students demanding “decolonized” higher education and an end to increases in student fees. In ostensible pursuit of these goals, protesters set fire to historic artworks, university vehicles, and the vice-chancellor’s office, and vandalized university buildings with human excrement.

More worrying still, they intimidated hundreds of people with threats of violence backed by instances of assault. An activist used a sjambok to whip a cellphone out of a fellow student’s hand, a vice-chancellor was punched, students and staff who defied the protesters were pushed and shoved, a security guard was beaten with a steel rod, and another had to be hospitalized after a rock was dropped onto his head. No one was ultimately held accountable, either by the university’s disciplinary system or in the country’s courts. (When charges were laid, they were later withdrawn.)

Furthermore, the behavior of activists indicates that racial abuse is now compatible with the pursuit of social justice, so long as the recipients of such abuse are either pale-skinned and/or insufficiently progressive in their politics. One student protester wore a t-shirt bearing the phrase “Kill All Whites”; a memorial to soldiers killed in both World Wars was daubed with the words “Fuck White People”; a senior academic who referred to a junior colleague as “just another fucking white woman” was appointed to a senior administrative position shortly thereafter. Darker-skinned students and faculty, meanwhile, who do not toe the party line, have been denounced as a “coconuts,” “sell-outs,” “colonial administrators,” and “porch negroes.”

On July 27th, 2018, Professor Bongani Mayosi, Dean of the UCT Faculty of Health Sciences, committed suicide after he was persecuted by activists disrupting the campus. Professor Mayosi’s sister did not hesitate to hold the #FeesMustFall protesters morally responsible for this tragedy. “He was hardly two weeks in his new position and the protests broke out,” she told the Sunday Times. “The vitriolic nature of the students and their do or die attitude vandalised his soul and unravelled him. Their personal insults and abuse cut him to the core, were offensive to his values and were the opposite of everything he was about.”

There’s a lot more, with bullying from both the top down and bottom up, and accusations of racism flying right and left.  What to do about it? All he can do is shake his head and mourn his school:

It may be that the University of Cape Town only seems more extreme because I am seeing it up close. My book offers a detailed account of what has happened here so that others can compare my experience with their own. Those comparisons will be illuminating. I am, however, convinced that concerns about a conservative and liberal moral panic at UCT are misplaced. Such accusations are used to dodge moral responsibility and to justify cruelty, violence, and vandalism in the name of self-righteous indignation.

Well, I’m not sure what the difference is between living in a moral panic and behaving badly because of that panic, but so be it. “Othering” breeds hatred and immorality.  However, Given Benatar’s views of his school and his anti-natalism, I’m surprised he’s still alive. One wonders why the students haven’t done him in, or why he hasn’t done himself in. The good news is that he’s still here, and so can tell us about what’s going on at UCT. Not that it’s especially cheerful.

Benatar’s article contains a video showing a security guard being violently attacked by UCT students, and it’s really scary to see this latent and then overt violence. But I’d prefer to show this well known video from 2016; showing students telling the science faculty that “science must fall”. It has to be scrapped and begun all over again with “folk wisdom”  Sound familiar?

But if you’re a dispirited science teacher in New Zealand, worried about whether you’ll be able to teach your science in the face of ideology, do cheer up a bit. You could, after all, be a science teacher at UCT! The students want to do away with science in toto! What chance do these kids have for a decent education when they come to college already claiming to know everything about everything?

34 thoughts on “The world’s Wokest university”