Increasingly, archaeologist and scientists are coming into conflict with indigenous people, and that’s to be expected as the latter exert rights that have long been trampled on. A lot of these conflicts involve biological remains like skeletons or fossils or, in this case, a log, that are found on “indigenous territory”. What do we do with such specimens?

First of all, you have to examine the claim that the indigenous have a genuine connection with the material. One would be hard pressed, for example, to say that a 15,000 year old fossil hominin in Alaska belongs to the local Inuits. It may come from a person not even closely related to modern Inuits. What is the moral claim to the skeleton? Likewise for remains found on modern or even ancestral tribal lands. Establishing such a connection is of course hard. Ideally, science would study the hell out of the object and then turn it over to those locals who have a substantive and empirical claim to it.

As for artifacts or living material, that’s clearer. Fossils and living species at least belong to the country where they’re found, though not necessarily to people who live nearest to the spot of discovery, and should not be removed to other places without permission. Artifacts like pots that can be clearly connected to modern groups must surely belong to them, though of course it would be nice if they were scientifically examined before repatriation.

But below we have a case where the course of action should be clear, but was violated because of what I call “the valorization of the oppressed.” We’re talking about New Zealand again, but in this case the indigenous people—the Māori—descend from Polynesians who arrived in what is now New Zealand about 700 years ago. Any non-“colonial” cultural artifacts dating after that period clearly should be given into the care of the Māori. Anything dated before about 1300, cannot be connected to Māori, and its disposition depends on property laws and government regulations.

And so, the discovery of a 40,000 year old log of a kauri tree (Agathis australis) that was preserved in an anoxic swamp, should raise no problems. But it did. Click on the screenshot to read:

Kauri trees are increasingly rare as they’ve been cut down for their durable and decorative wood, and a magnificent kauri is a sight to see: 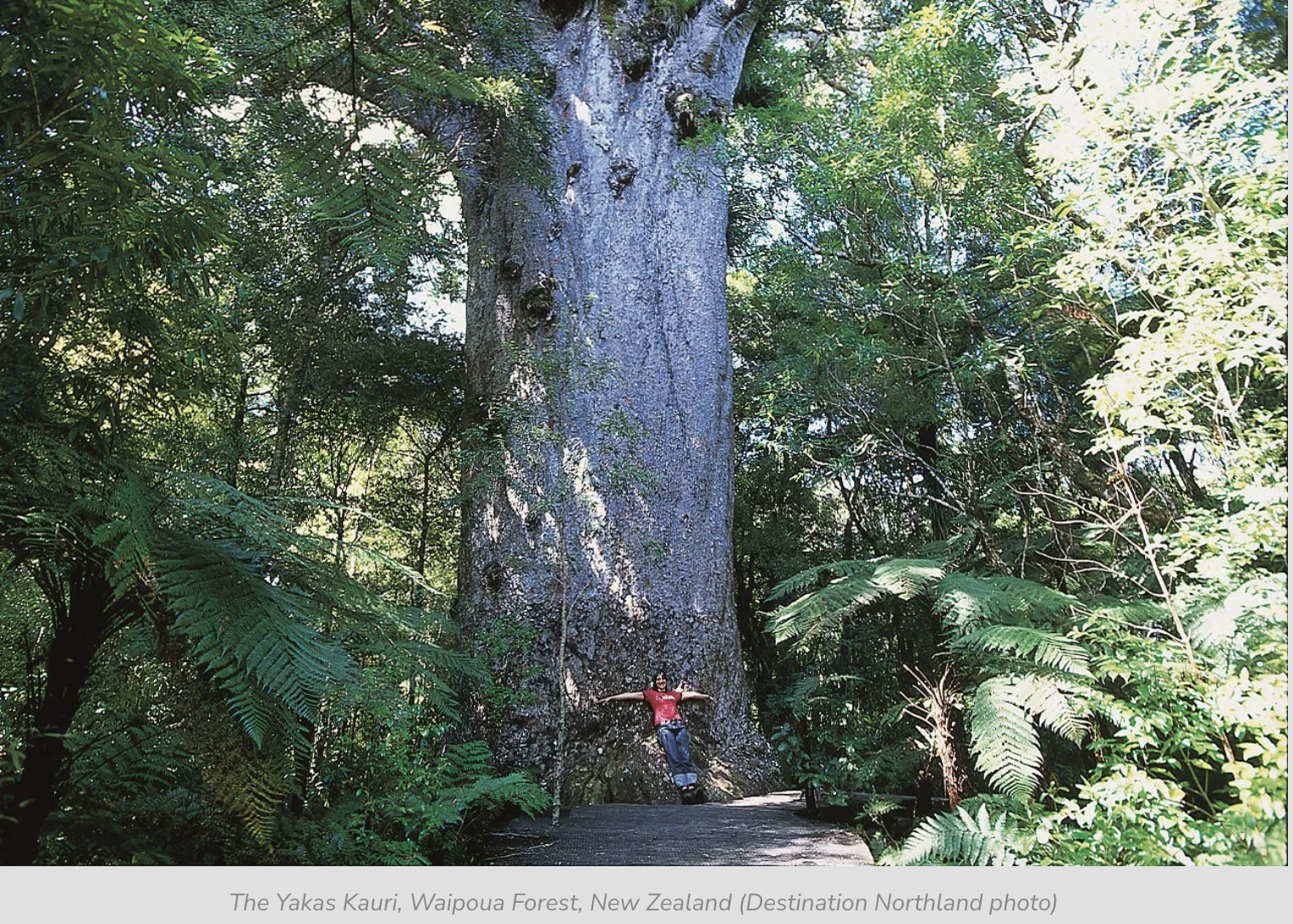 The trees, found only at the northern part of the North Island of New Zealand, are endangered. Kauri play a role in Māori mythology, and that, along with massive deforestation, has been one reason why cutting them is almost completely banned.  But aa 60-tonne kauri log was recently found in a swamp during excavations, and determined to be over 40,000 years old.

A 45,000-year-old log discovered during excavations for a new power station could explain a mysterious global event that may have dramatically changed the Earth’s climate.

Scientists in New Zealand believe the 60-tonne log could hold the answers to the ancient Laschamp Event – where the earth’s north and south poles switched with each other 40,000 years ago.

The 60-tonne Kauri log was found nine metres beneath the surface in Ngāwhā in New Zealand’s north island in February and was handed over to local Maoris on Wednesday after a major excavation operation.

Top Energy, the company building the power station, began earthworks in 2017 and had excavated 900,000 cubic metres of the soil before stumbling across the 16-metre log.

It was not known exactly when the reversal occurred but it was thought to have been about 41,000 years ago.

Scientists hope that studying the level of radioactive carbon in the tree’s rings would allow them to determine when the reversal occurred and for how long.

Kiwi scientists believe the magnetic reversals — and the accompanying drop in the Earth’s magnetic field strength, which allowed more solar radiation to reach the Earth’s surface — could have a major effect on climate.

‘This tree is critical, we’ve never found one of this age before,’ Mr Hogg says finding the tree was a stroke of luck which will play a huge role in future research.

The 16-metre log was transported to nearby Ngāwhā Marae (sacred place) on Wednesday, where a ceremony was be held to welcome the ancient tree to the hapū’s care (a division of Maoris).

As far as I can see, the tree was simply handed over to the local Māori without any scientific examination:

Ngāwhā Trustees committee chairman Richard Woodman said it was a ‘fantastic acknowledgement’ from Shaw that the tree was being returned to its rightful owners rather than gifted.

Transporting the tree was a major operation, with sections of about 1.5m long needing to be cut off either end so it could be moved, with the stump alone weighing 28 tonnes.

“Rightful owners”? Where did that come from? That tree both lived and centuries before the Māori even arrived in New Zealand. If there are rightful owners, it’s the government of New Zealand, who should hand the tree over to scientists who have, as noted above, a good reason for studying it. (Ring distribution can also give a clue to ancient climates in NZ, for one rarely gets a tree that is both that old and that well preserved.

The only reason Māori get the tree is because they consider it sacred. This is one example of how excessive respect for the culture of locals impedes the progress of science. No progress will be made by allowing it to stay on the Marae except to buttress a creation myth that is false. Study the hell out of it and then, if you wish, give it to the Māori, but don’t let myth overcome science. This is one reason why Māori “ways of knowing”—mātauranga Māori—are incompatible with science, for in this case the mythological sacredness of the tree, based on its presumed role in creation, prevent scientific work.

Let’s just hope the Māori allow scientists to look at the tree.