Last September, a surprising article in the New York Times reported on how the American Civil Liberties Union (ACLU) seemed to be losing its mission of defending civil liberties, moving more and more towards “progressive” politics. Part of this transformation involved suddenly prioritizing what speech to defend based on its perceived “harm.” More harmful speech (e.g., speech offending minorities or other oppressed groups) was to be given lower legal priority.

This was a complete reversal of the history of the ACLU, an organization that was one of my favorites. (They gave me pro bono legal help when I took the government to court over being illegally called up for alternative service as a conscientious objector.)  Now, it seems, they think that some people deserve more civil rights than others. This was all documented in one of my posts and in an article on Tablet that quoted secret ACLU documents. After Charlottesville, for example, Tablet reports that the ACLU made a momentous decision:

. . . the national ACLU circulated an internal document with new “case selection guidelines,” stipulating, “Speech that denigrates such [marginalized] groups can inflict serious harms and is intended to and often will impede progress toward equality.” Before agreeing to take a free speech case, the document continued, the ACLU would now consider “the potential effect on marginalized communities,” whether the speech advances the goals of speakers whose “views are contrary to our values,” and the “structural and power inequalities in the community in which the speech will occur.” A manifestation of the ACLU’s new approach can be seen in the decision by one chapter to intervene in a high-profile case at Smith College, where the group amplified bogus claims of racism leveled by a student against some of the school’s custodial and cafeteria staff.

There are many other signs of the ACLU’s change of mission, and you can see my posts on them here. And today there’s yet another, which Zaid Jilani describes in a post on his “inquiremore” site. Click on the screenshot to read. 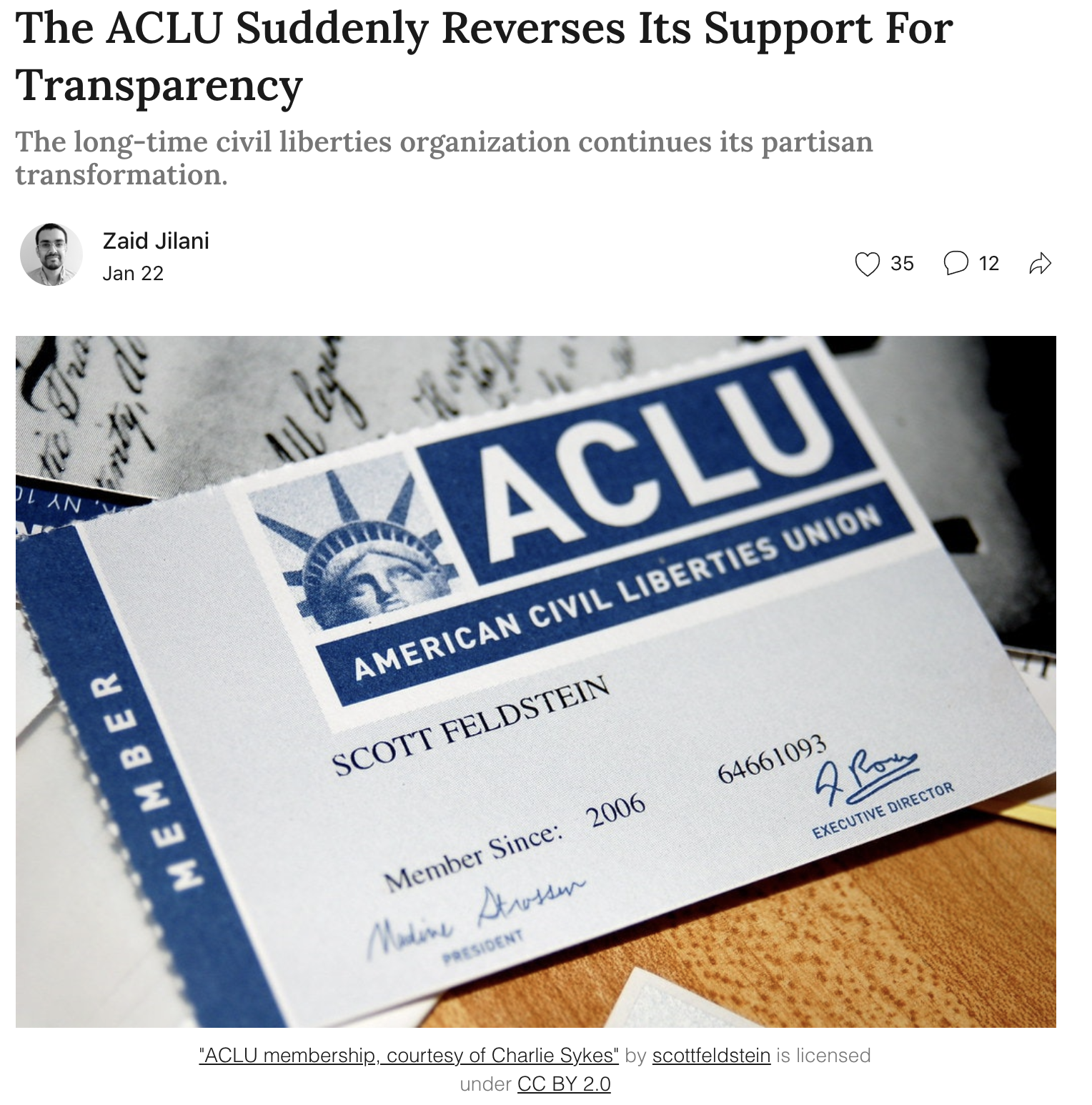 In brief, Jilani recounts the ACLU’s history of demanding transparency from government, and how it’s now backed off on its history of fostering transparency. The reason is because of the kerfuffle embodied in state bills that ban the teaching of Critical Race Theory (CRT). Parents who don’t want their children exposed to some of the more divisive or questionable aspects of CRT are now asking that curricular materials (syllabi, reading lists, assignments, etc) be made public, i.e., put online.

For the record, I don’t favor those bills. But I don’t see any reason that material involved in public-school classes shouldn’t be made public. (I’m not asking for all teachers to be filmed or recorded, but for the paper record of classroom assignments to be made public.)

The ACLU doesn’t like this, and I’m guessing because they actually want CRT to be taught to children. Do not underestimate their wokeness! If you think I’m exaggerating about the “new ACLU”, have a listen to legendary civil-liberties activist Ira Glasser, once head of the ACLU for 23 years, speaking on Bill Maher’s show. He’s appalled at what’s happened to his baby. Glasser, despite his vocation, is not a man of hot temper, and when he talks this way, you know that he’s really angry:

Back to “transparency”. Here’s the ACLU’s new stand (the ACLU is nearly as hamhanded at tweeting as was Donald Trump):

Curriculum transparency bills are just thinly veiled attempts at chilling teachers and students from learning and talking about race and gender in schools. https://t.co/EqKN4EGX3m

In that tweet they deliberately conflate CRT with “teaching about race and gender”. People like me—and, in fact, most Americans—favor the latter but not the former. Critical Race Theory, in both its academic construal and in how it’s taught in many schools, is not just “learning and talking about race and gender.” The tweet above is dissimulation.

The ACLU has a history, as I said. of demanding transparency. From Jilani’s post:

This marks a reversal for the ACLU, which has always argued for government transparency in all arenas, including in schools.

As Tablet’s Noam Blum noted, the ACLU of Nevada argued vigorously for transparency when that state’s schools were setting their sex education curriculum and policies.

“The days of back door decision making are over. Compliance with the open meetings law is meant to secure the opportunity of parents, students, and community members to have a meaningful impact on the development of policy. We are all well served when decisions on the appointment of sex education advisory committee members is subject to public scrutiny, rather than the result of the presentation of a narrow range of interests,” Staci Pratt, Legal Director of the ACLU of Nevada, said at the time. The organization used the state’s public records law to request materials related to sex education in each of the state’s 17 counties.

A few years later, the ACLU of Kentucky used records requests to uncover curriculum in all of Kentucky’s 173 school districts, seeking to find evidence of religious instruction by reviewing both policies and curricula:

The ACLU-KY sent requests to all of Kentucky’s 173 school districts seeking policies and curriculum for “Bible Literacy” courses.  While most districts are not offering these courses, the ACLU-KY found many of the courses that are being offered do not fall within constitutional strictures, which require any use of religious text in the classroom to be secular, objective, nondevotional, and must not promote any specific religious view.

The investigation uncovered public school teachers using the Bible to impart religious life lessons (Barren, McCracken, and Letcher Counties), use of online Sunday School lessons and worksheets for course source material and assignments (Letcher and Wayne Counties), and rote memorization of Biblical text (McCracken County) — practices which fall far short of academic and objective study of the Bible and its historical context or literary value.

If you don’t want curricula exposed that deal with race and gender, why do so many people want curricula exposed that deal with creationism being taught in public schools? It was my reading of Eric Hedin’s online syllabi at Ball State University, for example, that led me to discover that he was teaching Intelligent Design creationism in a public college—a violation of the law. The result was that he was forced to stop teaching religion in the guise of science. And, of course, parents foot the bill for their kids’ education, and surely have some rights in at least hearing what their kids are supposed to learn and do.

The ACLU also demanded transparency from schools when they were violating Title IX by segregating sexes:

The ACLU of Alabama was so bothered by government-sanctioned sex segregation in the school system that in 2008 it formally protested and sought documents from Mobile County schools outlining any policies related to the matter:

After hearing from outraged parents of students who, without notice, were involuntarily segregated by sex at Hankins Middle School in Mobile, Alabama, the American Civil Liberties Union and the ACLU of Alabama sent a letter to the Mobile County School System warning that mandatory sex segregation in public schools is illegal and discriminatory. The civil liberties organization also asked, under the Alabama Open Records Act, that the school district make public any and all documents relating to sex segregation policies in Mobile County schools from the past two years.

One of the things parents are worried about is racial segregation in schools, which is part of the CRT program (in this cases, segregation of graduations, dorms, and events are considered salubrious for minorities). Yet the ACLU demands transparency for sex segregation but opposes it for segregation by race or ethnicity. Why the difference? You know the answer. Jilani dosn’t speculate much about this, though the reasons are clear to all people not blinded by ideology. He finishes his piece this way:

In arguing against transparency in the public school system, the ACLU is departing from its traditional mission. As has been written about elsewhere, the ACLU is increasingly becoming more of an activist progressive organization. Among activist progressives, sensitivities about race and gender have often brought them to take positions that are in tension with classical liberal values like freedom of speech, transparency, and equal treatment under the law. Those same sensitivities appear to be trouncing the ACLU’s longstanding principles in this case.

But if there’s nobody around to defend the civil rights of everyone, then society will become a homogenous stew of “rightspeak”, and only the rights of those who have The Proper Ideology will be protected. That’s exactly what America’s founders wanted to prevent by enacting the First Amendment, and how the courts have construed that Amendment in the last two centuries. As the ACLU becomes a political organization, all we have left is the Foundation for Individual Rights in Education, which still protects civil liberties in a nonpartisan way. But they are limited to rights in education.

As Glasser notes above, if the ACLU goes down the drain, there will be no organization to replace it.  A slight emendation of Antony’s famous quote from Julius Caesar is appropriate:

This was the noblest organization of them all. All the rest of the organizations acted out of political self interest. Only the ACLU acted from honesty and for the general good. Its existence was gentle, and the elements mixed so well in it that Nature might stand up and say to all the world, “This was a great organization.”