When the hostage situation broke yesterday afternoon in Texas, I kept looking for news about it. Eventually all the media came on board—except the New York Times. By morning they’d been forced to post about it (and I don’t say “forced” lightly), but if you look at the online Times, it’s way, way down beyond the e-fold.

And here’s the paper copy of today’s NYT, sent to me by Anna Krylov.  Do you see a mention of the hostage situation there? I don’t.  But you can read about a woman killed after being shoved onto the subway tracks. Note as well that on all the evening news stations I watched last night, every one led with the Texas story. Every one! The NYT doesn’t put it on the front page. There’s nothing they love to ignore more than hate crimes against Jews.

Oh, and to the reader who assured me that this was not a terrorist or anti-Jewish act because the perp was a British citizen, read what the NYT has to say now:

Malik Faisal Akram, 44, was identified by the F.B.I. on Sunday as the man who took four people, including a rabbi, hostage on Saturday morning at a service at Congregation Beth Israel. The Reform synagogue is in Colleyville, a city of about 26,000 residents that is about 15 miles northeast of Fort Worth, Texas.

Yes, he may well be British citizen, but who says that that group can’t include Islamist terrorists? 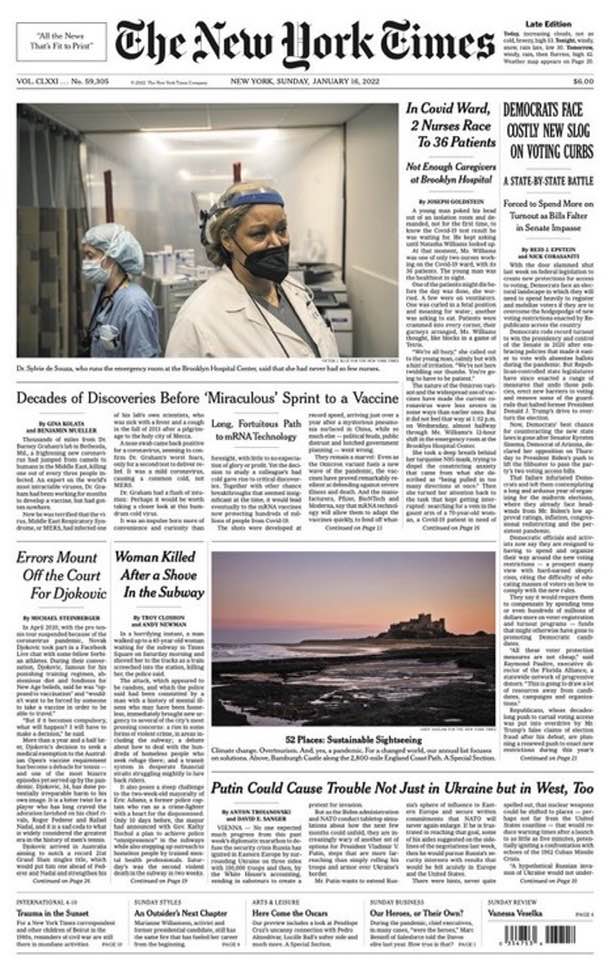 The Times isn’t fond of the Jews, of course, but we all know that. Still, the lacuna above is appalling.  But the NYT is not the only paper that strenuously tried to downplay the Jewish/terrorist angle (though you bet that if the terrorist had been a white supremacist instead of a Pakistani/British Muslim, it would have gotten a lot more coverage).  Have a look at this tweet from the BBC:

This is laughable. Not related to the Jewish community? Why a synagogue, then? Why didn’t the perp take hostages in a McDonald’s? Believe me, there are a lot more McDs than there are synagogues in Texas. And why did he ask for the release of a Islamic terrorist prisoner nicknamed “Lady Al Qaeda”?  Doesn’t the BBC have any curiosity about these issues?

Want more about how the media put “hostage situation” in scare quotes and other deliberate distortions? Read here.

I’m not going to dwell further on the anti-Semitism of much of the mainstream media, but I’ll tell a relevant joke:

So the guy goes up to the man and says “Excuse me, but did anybody ever tell you that you look like Hitler?”

The man responds, “Oh, but I am Hitler. I have been reincarnated and I am back on Earth to kill 10 million Jews and 33 geese!”

Hitler then turns to the bartender and says “See? I told you nobody cares about the Jews.”