Two days ago I discussed the contention of some Māori scholars and proponents of mātauranga Māori ,or Māori “ways of knowing”, that the Polynesians had “discovered Antarctica” in the early seventh century. (Written records show that the first confirmed discovery of Antarctica was in 1820 by a Russian expedition). If the Māori claim were true, it would not only be remarkable, but would precede what we know about the sighting of Antarctica by more than a thousand years! Moreover, since this knowledge would be part of mātauranga Māori, present governmental policy would mandate that it be taught as coequal with the “conventional knowledge” about the continent’s discovery. That’s a recipe for confusion! This whole discussion goes to the argument about “what counts as evidence?” And it appears that “evidence” in mātauranga Māori  is very different from what counts as “evidence” in modern science. In fact, the former is more akin to evidence that religious myths are true, like the claim that Jesus raised Lazarus from the dead.

Now the only evidence I had at the time was a rebuttal, written by Māori scholars, of the claims that a Polynesian canoe made of human bones “discovered” Antarctica ca 700 A.D., 600 years before the Māori came to New Zealand. That rebuttal article is below, and it’s not free. If you want a copy, make a judicious inquiry.

Now, however, I’ve managed to get hold of the original paper in Journal Roy. Soc. New Zealand (JRSNZ) that presents the “evidence” that Polynesians made it to Antarctica. Again, this paper isn’t available for free, but a judicious inquiry will yield you a copy:

In short, there’s no convincing evidence here that Polynesians discovered Antarctica, much less voyaged south of the Antarctic circle. The authors say that their method is oral tradition and scanning the “grey literature,” which as far as I can see in this case, means people who could write simply transcribing the oral traditions much later. There is no critical or scholar vetting of the “grey literature.”

The method of Wehi et al.  I quote:

In this short piece, we scan the grey literature and integrate this with oral histories known to us through extended whānau sources to provide a compiled record of Māori presence in, and perspectives of, Antarctic narratives and exploration.

That’s all for method, and I’ll summarize the one paragraph of “evidence” below—a paragraph thoroughly debunked by the Anderson et al. paper above. Wehi et al also add this:

We outline some of these human threads that connect Māori, the Indigenous people of New Zealand, to Antarctica, past and present.

The last sentence is just a long recounting in Table 1 of Māori who have been involved in Antarctic exploration, art, and management since 1993. There is no question about the veracity of this, but it takes up about 4/5 of the paper and is completely irrelevant to the contention that Polynesians discovered Antarctica, which is the issue at hand.

Well, here’s the “evidence” from oral tradition and the “grey literature” for that contention. And this is the totality of the evidence:

Polynesian narratives of voyaging between the islands include voyaging into Antarctic waters by Hui Te Rangiora (also known as Ūi Te Rangiora) and his crew on the vessel Te Ivi o Atea, likely in the early seventh century (Tara’Are 2000; but see Hiroa 1964, p. 118). These navigational accomplishments are widely acknowledged; Best (1923) described Māori navigators traversing the Pacific much as Western explorers might a lake. In some narratives, Hui Te Rangiora and his crew continued south. A long way south. In so doing, they were likely the first humans to set eyes on Antarctic waters and perhaps the continent. Supporting evidence lies in the name Te tai-uka-a-pia (Smith 1899; Tara’Are 2000; McFarlane 2008) which denotes the frozen ocean; a-pia means – a, as, like, after the manner of; pia, the arrowroot, which when scraped looks like snow (Smith 1899, p. 11; Tara’Are 2000). Smith suggests that these accounts refer to sub-Antarctic flora, fauna and physical geography:

…the rocks that grow out of the sea, in the space beyond Rapa; the monstrous seas; the female that dwells in those mountainous waves, whose tresses wave about in the water

and on the surface of the sea; and the frozen sea of pia, with the deceitful animal of the sea who dives to great depths – a foggy, misty, and dark place not seen by the sun. Other things are like rocks, whose summits pierce the skies, they are completely bare and without vegetation on them. (Smith 1899, p. 10)

Here he suggests that Southern Ocean bull-kelp – the ‘tresses that float on the monstrous waves’ – marine mammals, and icebergs respectively are visualised, all of which would have been new to Polynesian explorers.

And that’s all, folks. As you can see, it’s all based on oral tradition, and we know how reliable that is. The Māori oral tradition also claims that the gods created the world and humans de novo, so we can’t give it oral tradition that much credence.  As for the claim about a “frozen sea,” Anderson et al. suggest that it’s much more likely that the Polynesia term meant “sea foam” (have a look at their paper). They also explain the other terms (remember, Anderson et al are all Māori scholars. Finally, Anderson et al. suggest that it’s almost impossible to believe that Polynesia vessels of that era would have survived a journey to Antarctica or even the seas around it. Even less likely if they were made of human bones, as the legend maintains!

So, you see, we can discard the claim that the Polynesians discovered Antarctica because that extraordinary claim not only has no extraordinary evidence to back it up, but no convincing evidence at all. It’s 13 centuries of oral tradition. Ergo, the question can be ignored until we get hard evidence.

Why is this such a pressing issue for the Māori? If you read the paper above, or the one below in Nature Ecology and Evolution, (also by Wehi et al.), you’ll see that this ancient historical claim is being used to leverage power: power to affect Antarctic policy, power to infuse Māori insights into stewardship of the continent, and so on. Those issues are above my pay grade, and I’ll leave debate on that to others. I just want to add that, given the lack of historical precedents (or even in light of such precedents),  the Māori have no more claim over Antarctica than any other indigenous group in the Southern Hemisphere

The authors try to solidify Māori claims to Antarctic policy with this second paper (click on the screenshot). It’s more of the same, but has one humorous part (see below)

Nature Ecology and Evolution, which presents itself as a journal of modern science, published this timeline of Māori involvement in Antarctica in the paper above. I’ve circled the relevant parts. 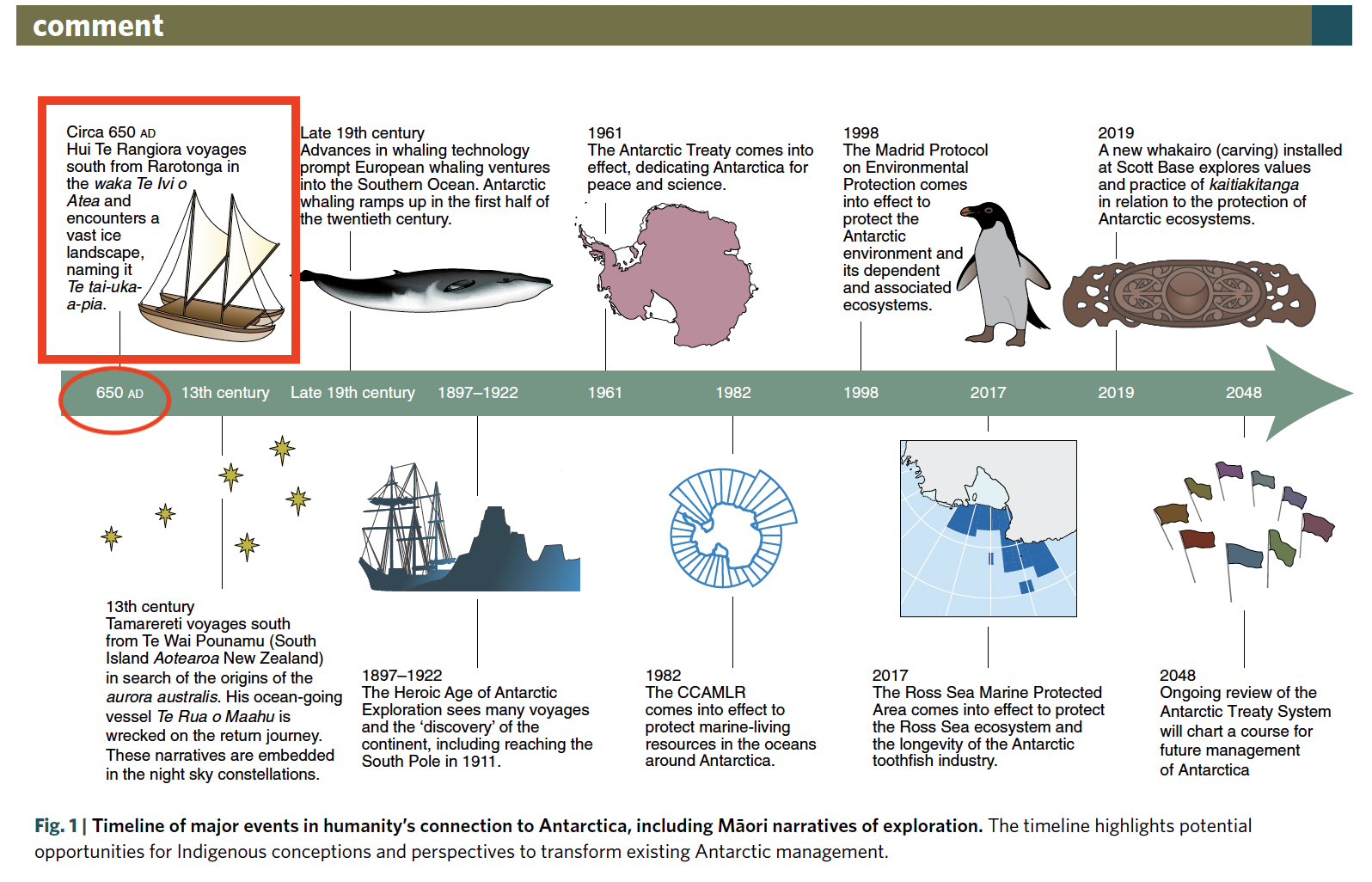 Doesn’t this journal do fact-checking, or do they accept all dubious claims from a group if it’s “minoritized”?  They at least should say “claimed timeline” rather that “Timeline of major events in humanity’s connection to Antarctica”?

So it goes. I give all the references to the papers discussed here below the line.

Anderson, A., T O’Regan, P. Parata-Goodall, M. Stevens, and T. M. Tau. 2021.  On the improbability of pre-European Polynesian voyages to Antarctica: a response to Priscilla Wehi and colleagues Journal of the Royal Society of New Zealand, in press.

44 thoughts on “What’s the evidence that the Polynesians discovered Antarctica? None save ancient myths.”