Do you want uplifting news or depressing news? I have both. In the interests of having your day improve later, I’ll proffer the depressing news first. That news involves further attempts to drag Darwin down into the mud.

Dan Dennett called Darwin’s theory of evolution by natural selection a “dangerous idea” because it was like a corrosive acid that ate through and destroyed all ideas of design and a designer as explanations of nature and the way we think about it. Howard University biologist Rui Diogo, however, has a different take. Darwin’s views are “dangerous” because, apparently, they are sexist and racist. And, he adds, this tarnishes his theories and his legacy.

Now I’ve explained in detail, as have others, that yes, Darwin was a man of his time and emitted views that would be considered racist today, though he was ambiguous about even that, as you can see from reading The Voyage of the Beagle (this is part of my Antarctica talk on Darwin and the Fuegians). But there is no doubt that Darwin was far more of an abolitionist than most Brits of his time: his family (the Wedgewoods) had been opposed to slavery since the late 18th century, and Darwin never wavered on his dislike of slavery and support of abolitionism.

So we already know that Darwin wasn’t perfect by modern lights, but he was a damn sight better than most of his peers. I always ask people who like Diogo who tar Darwin with the label of “racist” or “misogynist” if they would have held fully modern and progressive views in the mid 19th century. I doubt it.

Yet the Pecksniffs insist on bringing up Darwin’s racism over and over again, as if we and the public haven’t heard enough about it.  And it’s not just brought up to fill in a historical gap about the man’s views—for we already know that—but to cast aspersions on Darwin’s legacy in biology.

Case in point: the topic of the upcoming lecture noted below. Speaker Rui Diogo‘s talk is billed as “an unflinching look at how the racism and sexism of the Victorian era undermined Darwin’s scientific work and legacy.” (My bold.)  There will be no flinching by Diogo, but there shouldn’t be by anyone.

First, what he’ll say is already well known by evolutionary biologists, historians of science, and any of the public who care to look up Darwin’s views.

More important, Diogo is dead wrong in asserting that Darwin’s biased views “undermine his scientific work and legacy.” Perhaps in Diogo’s eyes, but not in the eyes of most others. Are we supposed to think less of the theory of evolution, or of natural selection, or of Darwin himself, because he held views more liberal than those of his peers, but not up to snuff in the eyes of a Progressive Democrat? The goal of Diogo, it seems, is to tarnish the luster of Darwin. He won’t succeed because, in the main, Darwin got his science right.

But nobody’s perfect, and I highly doubt that if Diogo was an upper-class Englishman in the Victorian era, he’d be waving signs saying “Black Lives Matter.”

If you want to pay $30 to hear this nonsense, be my guest. But remember that this is sponsored by the Smithsonian Institution. Click on the screenshot if you want to be fleeced. 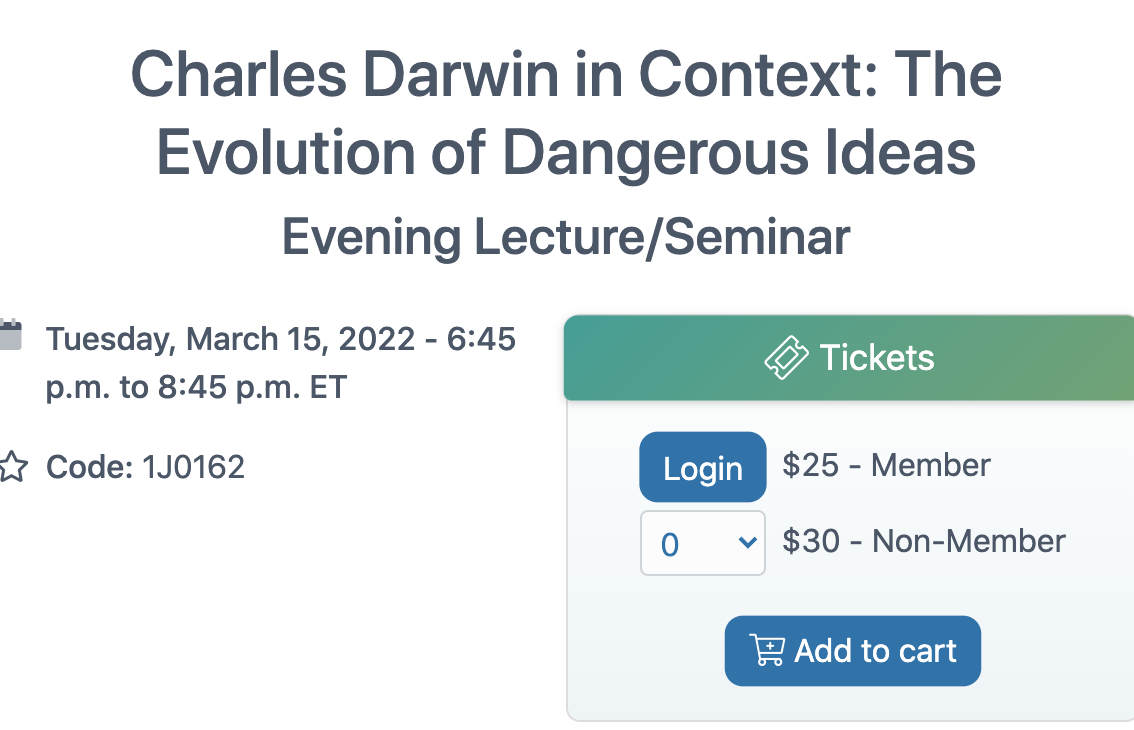 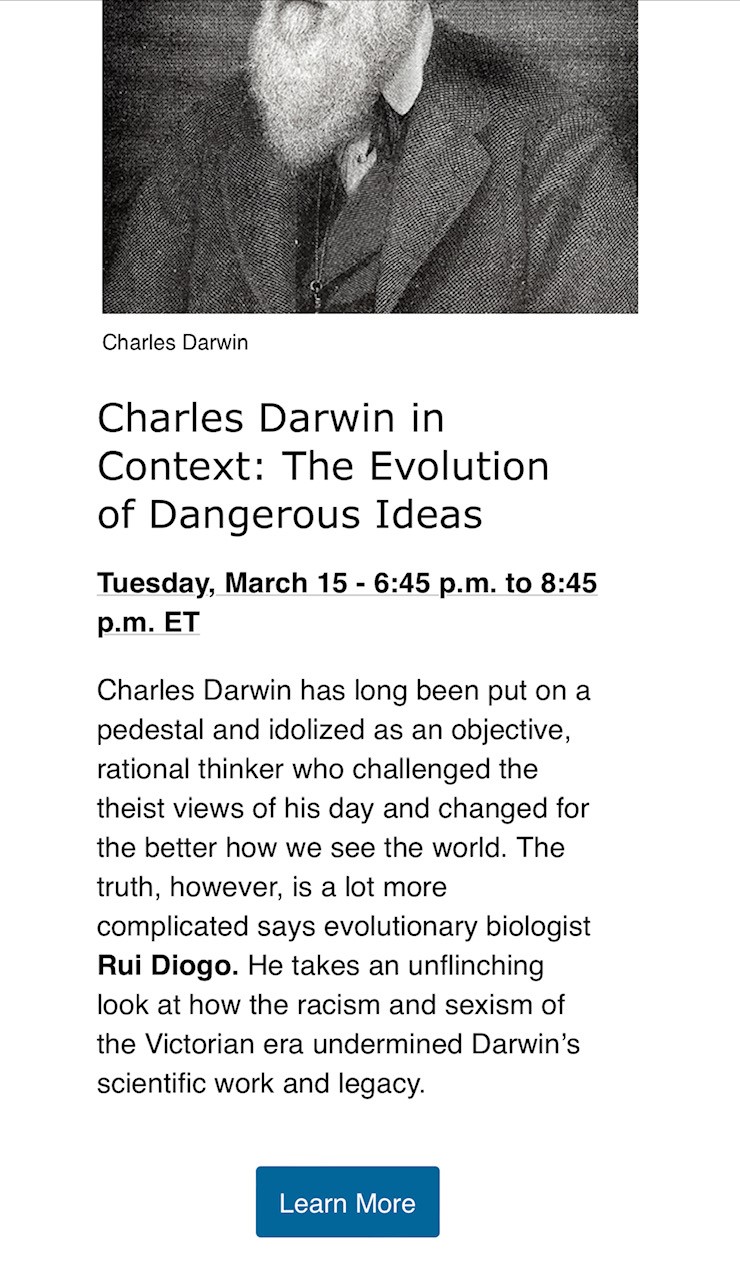 UPDATE: I’ve found that Dr. Diogo seems to be dining out on Darwin. To see a related lecture from last fall, click on the screenshot: 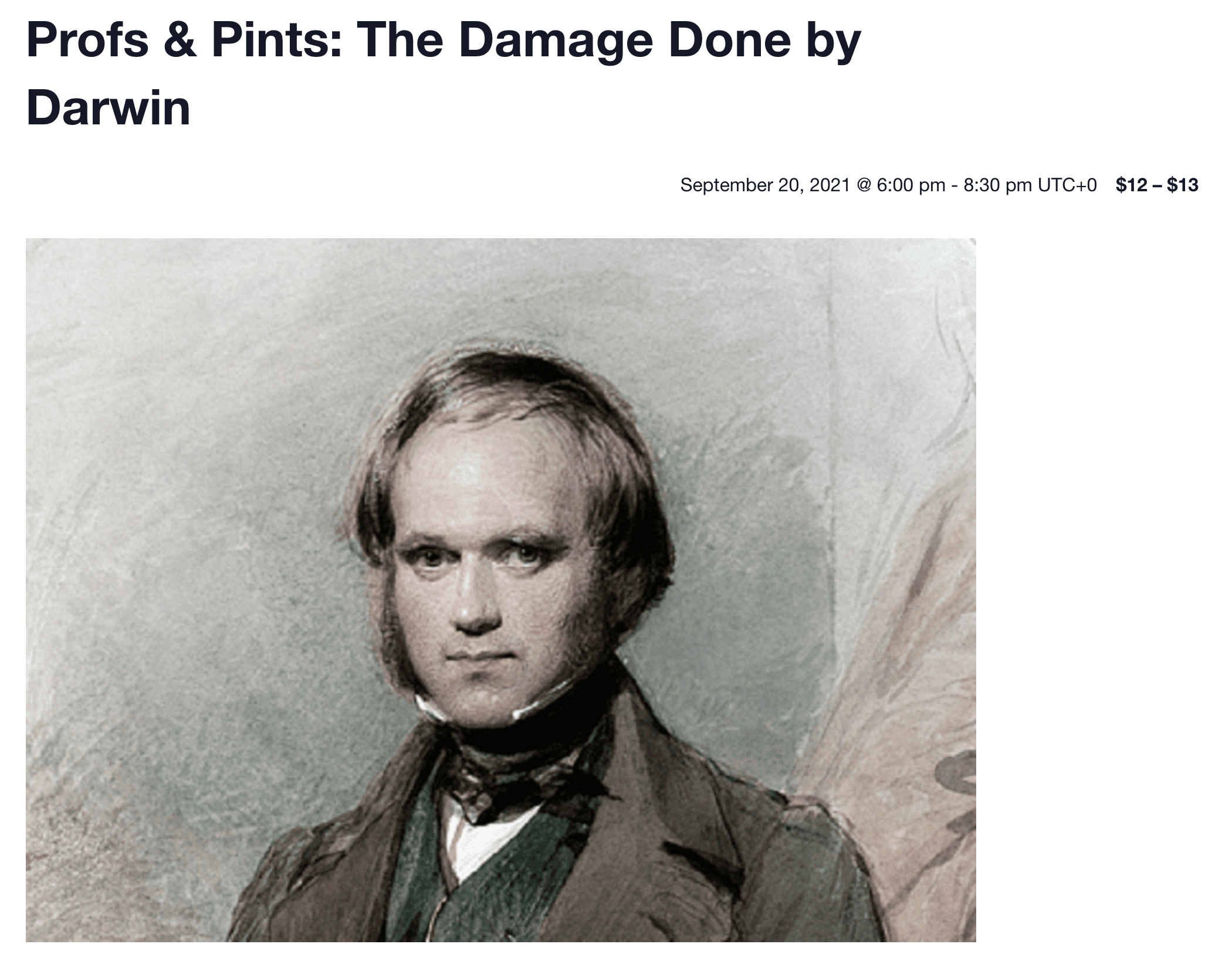 I can’t be arsed to rebut the following summary of this lecture, as probably written by Diogo. Let me just say that yes, there were precursors of Darwin’s ideas before The Origin, including even natural selection by Patrick Mathew. But his greatness was cobbling together a magnificent edifice that has, in the main, stood the test of time. The bolding is mine:

Profs and Pints presents: “The Damage Done by Darwin,” a look at how the acclaimed naturalist’s racism and sexism undermined his work and haunts us to this day, with Rui Diogo, associate professor of anatomy at Howard University’s College of Medicine and resource faculty member at George Washington University’s Center for the Advanced Study of Hominid Paleobiology.

[Under current District of Columbia regulations attendees will be required to wear a mask except while eating or drinking. The Bier Baron will be requiring proof of Covid-19 vaccination or a negative Covid-19 test from the previous 72 hours for entry. It also will be requiring ticketed event attendees to purchase a minimum of two items, which can be food or beverages, including soft drinks.]

Charles Darwin has long been put on a pedestal and idolized as an objective, rational thinker who challenged the theist views of this day and changed how we see the world for the better. The truth, however, is a lot more complicated. Many of Darwin’s ideas were less original than widely believed and, in many cases, repackaged the false assumptions and prejudices of his era as the purported product of scientific observation. They helped buttress racist and sexist worldviews in ways that would do tremendous damage even to this day.

Tremendous damage? HOW? We already know that Hitler was not a Darwinian, so where’s all that harm? Answer: Diogo is making it up.

If others misused Darwin’s ideas to perpetrate bigotry, that’s not Darwin’s fault. But wait! There’s more!

Join Rui Diogo, an evolutionary biologist who has extensively reviewed Darwin’s books, diaries, notebooks, and letters, for an unflinching examination of Darwin’s life, thinking, and impact.

Professor Diogo will look at how almost none of the grand ideas attributed to Darwin—including the theory of natural selection—truly originated with him. He’ll discuss how Darwin stated as “fact” inaccurate constructions based on Victorian biases and stereotypes. And he’ll explore how Darwin’s assertions, and their warm reception, were very much a reflection of a broader ideological war that had left England’s wealthy Victorian elite eager to find new justifications for their relative privilege in the face of feared revolution.

Many scientists involved in similar research during Darwin’s time were not nearly as racist or sexist in their thinking. But Darwin was more skilled than most in packaging his ideas in ways that made them accessible and appealing to the general public. As a result, his writings became easy ammunition for generations of colonialists, white supremacists, and others seeking to defend social hierarchies, discrimination, and oppression.

Here is a man who doesn’t understand what Darwin actually accomplished.

30 thoughts on “Once again, Darwin gets dragged into the muck by the Woke”