The latest webpage of Scientific American shows a big, bold, headline article that has nothing to do with science—at least as far as I know. Click on the screenshot to see the page, and then on this link to see the article on citizen militias, which of course decries them as white-supremacist organizations that constitute a profound danger to the Republic. That may be true as a generality, but it is not science: it’s politics and sociology with a Leftist bent. 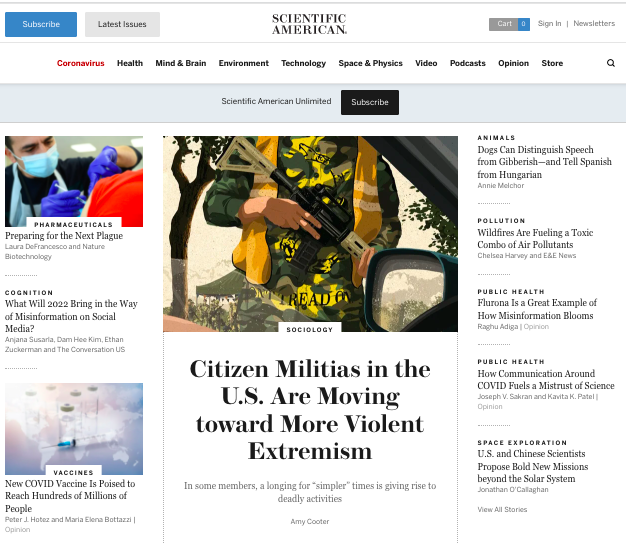 Here’s the author; Ms. Cooter apparently has training at sociology but not science. (The article is classified under “sociology”.)

And just two quotes, one from the beginning of the article and the other from the end.

This was the third militia event I had attended. I am a sociologist, and at that time I was a graduate student at the University of Michigan just beginning in-depth fieldwork and interview research about the militia movement in the U.S. I had approached members of this group a month earlier during a public meeting at a strip mall diner because I wanted to understand why people join civilian groups that prepare for armed combat, and I planned to examine whether militias propagate racism and violence. My fieldwork in Michigan, as well as in-depth interviews that included groups in other states, continued through 2013. Since then, I have maintained regular contact with militia members, especially in Michigan, and they update me with their activities and responses to political and social events. We regularly speak about their values and their motivations. I follow their online posts. Last summer I conducted a survey asking members what they thought about protests related to COVID social restrictions and George Floyd’s murder in Minnesota.

. . .Speculating on how militias may evolve in the future under increased scrutiny is difficult, in no small part because the units are still adapting to the aftermath of Trump’s presidency. In contrast to what many members had predicted, they did not see President Biden enact martial law or start an immediate attack on Second Amendment rights. Millenarian militias and other groups on the extreme end of the nostalgic group spectrum nonetheless remain vigilant, and some are eager for violence. Members may be plotting deadly actions, but now they are on increasingly private and secure Internet platforms that are more difficult to monitor.

So the reality is that the danger has not abated. Quite the opposite: Militia emotions and activity could be easily exacerbated by another political leader who encourages exclusionary thinking and paranoia or by a foreign terrorist attack that nostalgic groups perceive as threatening to America’s safety or culture.

Law enforcement must remain watchful for signs of radicalization in the movement, but as uncomfortable as it is, we as a society also must recognize that militias’ violent potential is not limited to these groups. They are not fluke outliers. Members share ideological similarities with other white Americans who distrust the government and believe the country has declined because of increasing liberalism. Much work remains to repair the distrust and to protect innocent people from the violence that it breeds.

This belongs in the op-ed section of the NYT, not in a science magazine.

35 thoughts on “Speaking of Scientific American. . .”