It’s from the National Post, of course, which is a conservative site, but do you think the most liberal Canadian newspaper (I’m not sure which one that is) would publish an article like the following? I’m a sucker for listicles of any sort, so of course I read it. Also, I’ve been paying more attention to the follies of Canada since I started learning that it may be even more steeped in progressive leftist lunacy than the U.S.  But unlike the U.S., I don’t think that these extremes will drive Canadian voters towards the right.  I may be wrong, so enlighten me if you know Canadian politics.

Anyway, this is just for fun. 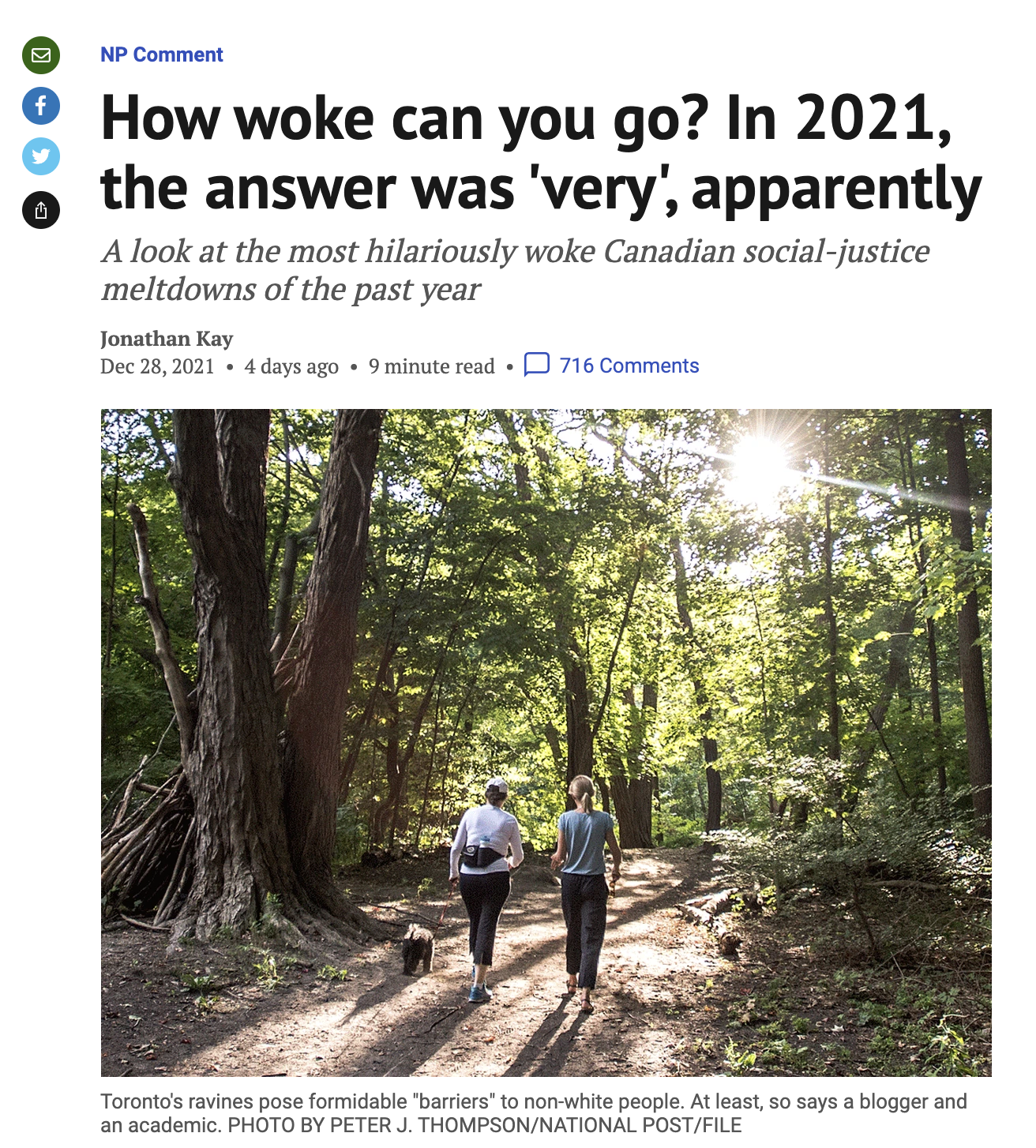 The author, Jonathan Kay, evinces a sense of humor in his opening paragraph:

When the holidays arrive, I often take the occasion to write solemn think pieces that survey the human condition in all its many facets — as with my 2019 Christmas essay about how Ambrose of Milan’s response to the Massacre of Thessalonica in 390 A.D. shaped the western Christian tradition. But writing those thumb-suckers takes a lot of “emotional labour.” So this year, as yuletide approaches, I’ve instead acceded to my editor’s request that I write a trashy listicle cataloguing the most hilariously woke Canadian social-justice meltdowns of 2021. “It is easier to look wise than to talk wisely,” Ambrose sagely advised. Here are some social-justice enthusiasts who had challenges on both fronts.

I love the phrase “emotional labor”, for it’s a red flag to stop reading whatever text that contains it. At any rate, Kay gives many examples, but I’ll show only three,

This first one I wrote about earlier (PCC[E] is always on the ball). This is from Kay:

Kies was part of a 2021 trend, as educational organizations figured prominently in the year’s biggest woke farces. That includes the Toronto District School Board (TDSB), which canceled a speaking event starring Nobel Peace Prize Laureate Nadia Murad, on the basis that paying heed to her account of being held as an ISIL sex slave in 2014 might promote “Islamophobia.” This decision was especially notable given that, around the same time, the same school board was paying activist Desmond Cole $16,000 for a four-part Zoom lecture series that purported to instruct TDSB senior staff on anti-racism, but which contained (in at least two of the four lectures) lengthy digressions about the evils of Israeli “settler colonialism.” Nice work if you can get it.

It’s one example of two Leftist principles colliding (sympathy with supposed underdogs versus concern for women’s rights). As the MacPherson Principle (devised by reader Diana MacPherson) asserts, whenever two liberal principles conflict, it’s always resolved in a way that the women lose. (Another example are the many people who, without investigating the data, think that any male—with or without medical intervention—who decided their gender is female should be able to participate in women’s sports. But more on that tomorrow.)

And of course the Language Police operate north of the border:

Needless to say, 2021 also brought all sorts of new demands about how we’re supposed to talk and what words we’re allowed to use. Prominent trans activist Florence Ashley opined in June that we should all be careful not to use male and female terms when discussing our dogs and cats, because “gendering animals serves to normalize bioessentialist conceptions of gender. When we gender animals, we forget that sex is assigned. We begin to believe that sex is literally *in* the body.” (Imagine thinking such a thing!) And just this month, we learned that Ontario’s public service has compiled a list of discouraged terms that includes “pipeline” (offensive to Indigenous people, apparently) and “low-hanging fruit” because (and I am not making this up) “though there is no direct connection, the term can be problematic for those who witnessed lynchings.” A separate list created by CBC Ottawa in recent works similarly warns of “words and phrases you may want to think twice about,” including “spooky,” “lame,” “brainstorm,” and “grandfathered,” all for reasons that are too ridiculous to repeat.

Words are getting banned so fast, in fact, that some of us don’t even have time to learn the new ones before they’re relegated to history’s racist dustbin. On December 11, Shree Paradkar, the Toronto Star ’s “Race and Gender Columnist,” dedicated a whole column to the revelation that she is “saying bye-bye to ‘BIPOC,’” an acronym that entered common progressive parlance just a few years ago, and which many ordinary Canadians don’t yet use or even understand. Paradkar complained that “as with POC or person of colour, BIPOC got swallowed up, quickly lost nuance, and got spat out as a racial identifier to say ‘not white.’”

BIPOC, as you all should know, stands for the grouping of Black, Indigenous, and People of Color. But it may soon be passé, or get added initials like LGBTQ did.

Finally, this one is so extreme it’s not very funny at all:

Not to be outdone, District 20 of the Ontario Secondary School Teachers’ Federation (OSSTF), headquartered in nearby Burlington, instituted a new internal voting system that explicitly allots voting power on the basis of skin colour — such that the voting power of non-white members is grossed up to ensure it represents the same (or greater) overall voting power as that of white members. (By way of example: If there are 15 white members voting, and five non-white members voting, the vote value of non-whites members is tripled so as to bring the net racial vote balance to even strength. Details are spelled out in the animated YouTube video that OSSTF produced to sell the plan to its own membership. Google “OSSTF District 20 on Why White and Non-White People Should Have Different Voting Rights.”)

Here’s a slide used to explain the new system, taken from the link above: 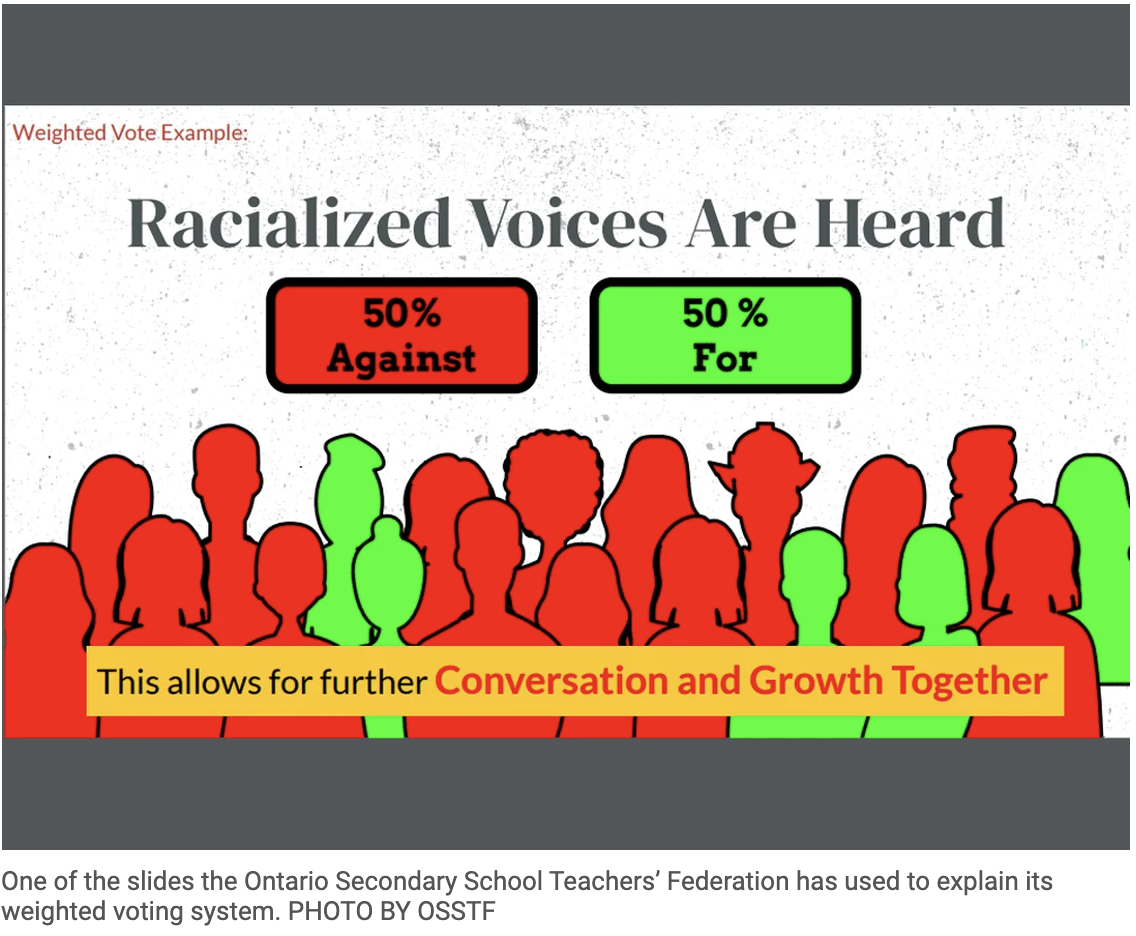 Since this is a public school, isn’t there some kind of law in Canada that prohibits violating the “one person, one vote” principle?

There are several more at the site; go see for yourselves.