The American Civil Liberties Union, once a great organization for defending free speech and civil rights in America, is circling the drain. They now have more than one foot in the extreme Social Justice arena, defending the right of surgically and chemically untreated biological men who identify as transwomen to compete in women’s sports.

Now the ACLU has a Human Rights Program headed by one Jamil Dakwar,  whose bio is here and whose duties and background is described by the ACLU:

Jamil Dakwar (@jdakwar) is the director of the American Civil Liberties Union’s Human Rights Program (HRP) which is dedicated to holding the U.S. government accountable to its international human rights obligations and commitments. He leads a team of lawyers and advocates who use a human rights framework to complement existing ACLU legal and legislative advocacy, primarily focusing on promoting racial and economic justice and ending mass incarceration, police violence, and extreme sentencing. HRP conducts human rights research, documentation, and public education, as well as engages in litigation and advocacy before U.S. courts and international human rights bodies.

. . . Before coming to the United States, he was a senior attorney with Adalah, a leading human rights group in Israel, where he filed and argued human rights cases before Israeli courts and advocated before international forums.

The tweet below appeared on a Jewish website, but I can’t find it on Dakwar’s Twitter feed. He may have taken it down, perhaps because the notion of “Zionist supremacy” has a long history of connection to anti-Semitism. If you go through Dakwar’s tweets, though, you’ll find many of them excoriating Israel and valorizing Palestine (there is NO denigration of Palestine, which of course is a notorious human rights violator). This singling out of one country as a human rights violator and valorizing countries whose human rights violations are numerous is a sign of anti-Semitism.

I’ve put another of his tweets and one retweet below, but you’ll find much more on his Twitter feed. 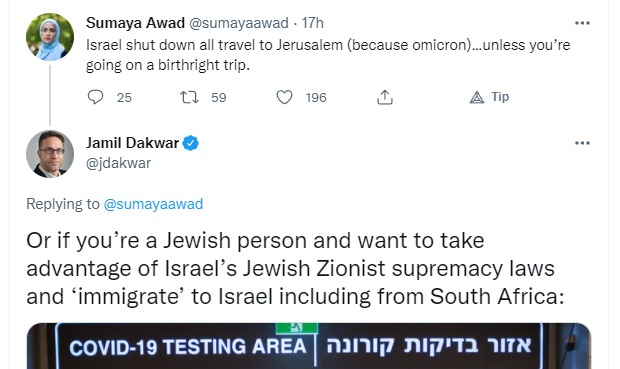 The Summit for Democracy on December 9-10 (there will be another) was organized by Biden with the goal of “[bringing] together leaders from government, civil society, and the private sector in our shared effort to set forth an affirmative agenda for democratic renewal and to tackle the greatest threats faced by democracies today through collective action.” You can see their schedule here, the list of participating delegations (many countries) is here (they all seem to be democracies); and I find no mention of Palestine. Why should there be, since Palestine, like many Middle Eastern countries, isn’t a democracy?

This will be the best response to Biden administration inclusion of Israel in the #SummitForDemocracy #StandWithThe6 https://t.co/Z6W2gHZdzL

As NPR and Reuters report, Israel has investigated these six organizations and designated them as fronts for the Popular Front for the Liberation of Palestine (PFLP), an organization that, as Wikipedia notes,  “has been designated a terrorist organisation by the United States, Japan, Canada, Australia and the European Union”. NPR reports Israel’s allegations that the PFLP is “an armed faction that has carried out deadly attacks against Israelis,” All of the six organizations touted by Dakwar are thus extremely likely to have supported terrorism, and Israel has labeled them terrorist organizations. I won’t label them that, but I do believe that they’ve supported the PFLP.

So we have the director of the ACLU’s human rights wing defending organizations that transfer money to terrorists (the evidence for this is substantial).

It thus looks as if the ACLU has gone even woker, as now its Human Rights director is attacking Israel and defending Palestine constantly. But that’s what the Woke do, and what the extreme “Progressive Left” does.

Visit https://t.co/eRV8ifK1uL to call on US State Sec @SecBlinken and EU High Rep @JosepBorrellF to condemn this move. #StandWithThe6 pic.twitter.com/o00NjzcVK2