Christopher Hitchens died on December 15, 2011—ten years from last Wednesday.  There have been a lot of pieces about Hitchens since then, as well as postmortem collections of his own writing, but I haven’t read any eulogy for Hitchens as eloquent and touching as the one below (h/t Chris). It’s from conservative Douglas Murray in the 2011 Spectator, and you can read it by clicking on the screenshot (it’s a very short piece). If the link on the screenshot is paywalled, this one is archived and free. (By the way, I did read and like Murray’s anti-woke book The Madness of Crowds: Gender, Race and Identity).

It’s a testimony to the expansiveness of Hitchens’s character that he and a pretty right-wing guy were friends—and according to Murray, they were pretty tight. At any rate, I’ll let you read this lovely piece for yourself—it’s ten years old and was clearly written in the moment right after Hitchens had died. I’ll give a few excerpts. 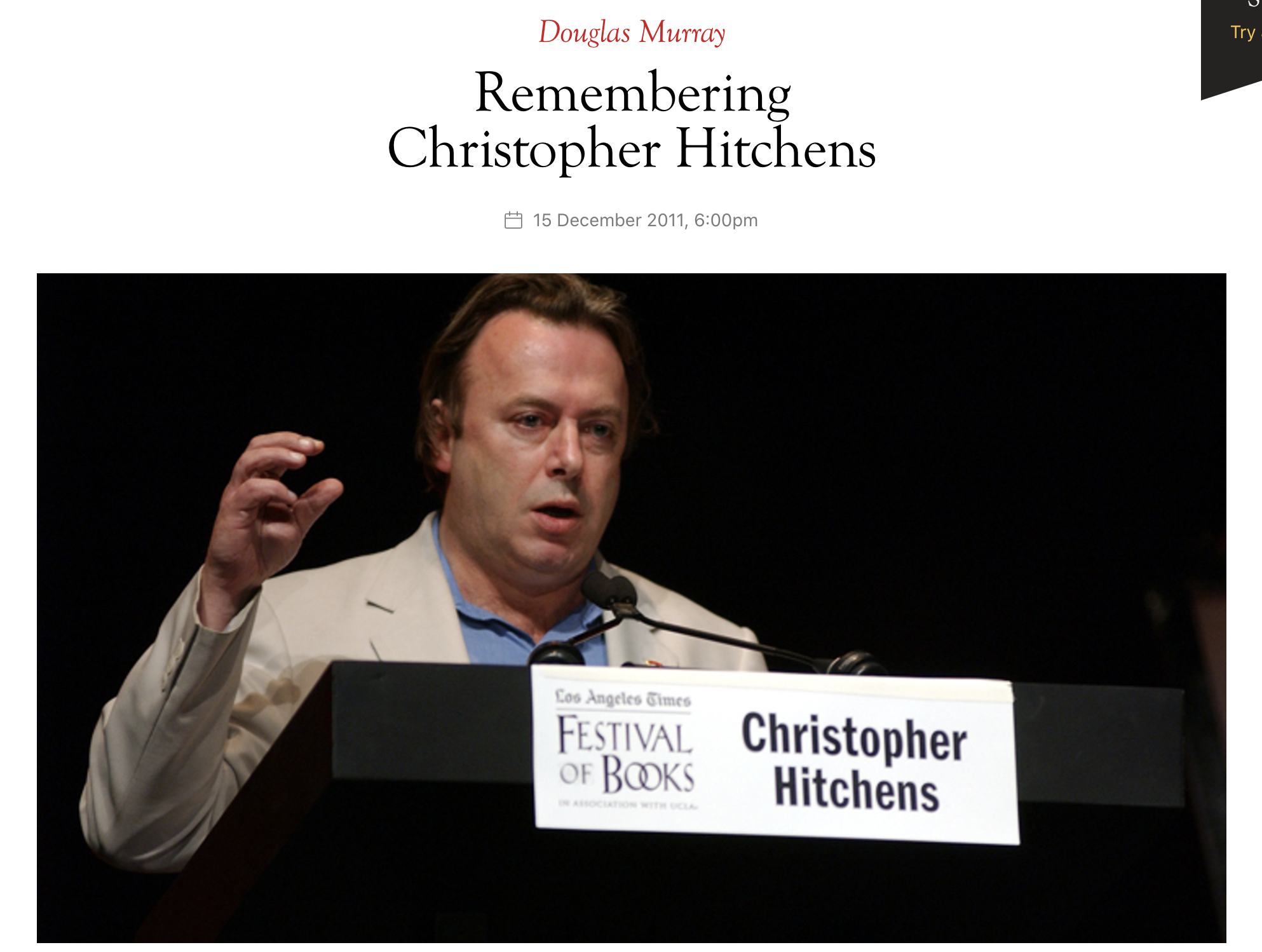 This is an excellent beginning:

Just one of Christopher Hitchens’ talents would have been enough for most people. In him those talents — like his passions — all melded into each other: as speaker, writer and thinker. Yet he was more than the sum even of these considerable parts, for he possessed another talent that was even rarer — a talent for making us, his readers, want to be better people. He used his abilities not to close down questions and ideas, but to open them up. In the process he made you, the reader, aware that you needed to do more, engage more, think more and know more. Writers often feel a need to impress their readers. Christopher made his readers want to impress the writer.

Murray describes Hitchens’s well-known capacity to travel and work at a pace that would drive others to a frazzle, and to drink Mr. Walker’s amber restorative copiously all the while. And even then, tired and besotted, Hitchens could turn out the most wonderful and thoughtful prose. Do read Murray’s account of how, after a bibulous day, Hitchens went home and wrote a brilliant piece.

He was a master on the page. But on stage he perhaps excelled even further. As a mutual friend observed some years ago: ‘There is only one real rule in public speaking: never speak to an audience with, before or after Christopher Hitchens.’

That’s for sure!  And Murray has a touching ending that rings very true:

A couple of days before Christopher’s diagnosis we spent a day together at Hay. I was reading the memoir that he was promoting, Hitch-22, the opening chapters of which are among the most moving ever written. At the end of a long day he dropped me at my hotel. In the morning he would fly to the US. His schedule was always extreme but for the first time it seemed to be taking a physical toll. If we will keep on wishing that we had had another couple of decades of him, we will also have to concede that he lived his life exactly how he wished, burning bright and burning hard. That included working himself right up until the end for the things he believed in, the things he wished to fight for and — which was the same — the things he loved. As I waved him off that night I remember registering the thought that the day would come when we would have to live without Christopher. Now that day has arrived. It will be hardest of all for his wife, Carol, and for his brilliant children of whom he was so very — and justifiably — proud. But it is also something that, in an incomparably smaller way, the rest of us will have to manage too.

We have lost our sharpest wit, one of our finest writers and one of our best minds. There are no false consolations to be had. Only the truth that from now on, instead of knowing what Christopher thinks, we will have to consider what he would have thought. We will, in other words, have to think for ourselves. If we manage it then, in large part, it will be thanks to Christopher and the incomparable example — in life and work — that he provided.

There’s more, so go read the whole thing. Yes, he did live the life he wished, and I doubt that he spent much time doing things he didn’t love.  Even so, many of us wish he were here now, for the follies happening in America would surely provide ample fodder for his scathing wit. As Murray says, we’ll never know what he would have thought about things like cultural appropriation, transgender activism, pronoun usage, and the racial tension that’s permeating society. But we do know three things: he would have something to say, what he’d say would be interesting and thought-provoking (and perhaps contrarian), and the prose would get us hooked.

As for thinking for ourselves, that was the point of Hitchens’s last public speech, when he received the Richard Dawkins Award less than two months before he died. While he was clearly ill, Hitchens’s words are loud and clear (his bit starts at 12:10, and if you haven’t seen this video, watch the whole thing):

22 thoughts on “A eulogy for Hitchens by Douglas Murray”