Reader Martim sent me a link to this article in The Economist, which is pretty much paywalled but includes a paragraph and two graphs you can see. Click on the screenshot below to see what’s viewable:

And the figures, which buttress the title’s assertion: 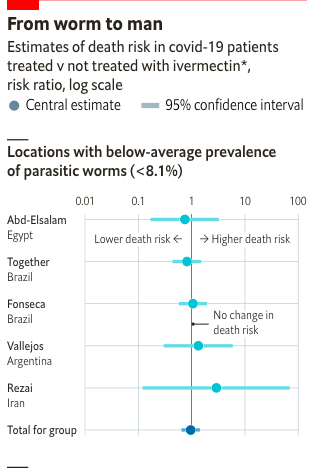 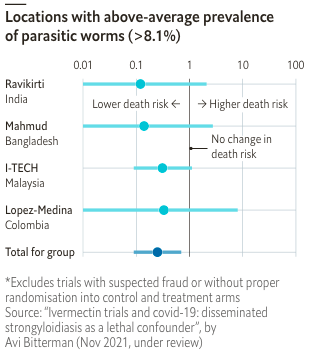 Now this is basically all of the article I’m allowed to read, but it hints at why some studies may show a positive effect of Ivermectin on patients infected with Covid-19. To put it simply, worms are a “comorbidity”, that might be eliminated with ivermectin. If having worms makes raises your chances of dying or hospitalization from having the virus, then taking ivermectin could help save your life not by affecting the virus, but by ramping up your immune system after the worms have gone.  Ivermectin would not, then, be of any use in treating patients unless they’re known to be affected with roundworms. (Ivermectin helps get rid of roundworms that cause intestinal strongyloidiasis and onchocerciasis, conditions that weaken your immune system.)

The graphs above suggest what one might predict: ivermectin would be more efficacious against Covid-19 in countries with a higher prevalence of worms, specifically the kind of worms killed by ivermectin. And that’s what the graphs show.

Of course, some of the studies above, both positive and negative, may already have been discredited by subsequent inspection (I haven’t checked), but I’m surprised that nobody has suggested this explanation before. (If they have, I haven’t seen it.)

In a month or two we should know the results of the properly conducted Oxford study on the effects of ivermectin on Covid-19 mortality. I’m almost positive that if the drug does have a positive effect on the disease, it will be minor—certainly much less than that of vaccination or the new Pfizer antiviral pill. But we will wait patiently. I tried to bet my doctor on 3:1 odds (if I won, I’d get $10, while if he won, and Ivermectin had a big positive effect, he’d get $30) that ivermectin wouldn’t show a greater preventive or curative effect than jabs and the new treatments, but he rejected that as a “sucker bet”!

UPDATE: I’ve just managed to subscribe for free and so have seen the rest of the article; it appears that some have considered worms as a comorbidity. A quote (emphasis is mine):

Yet ivermectin’s advocates insist that there is solid science demonstrating the drug’s efficacy. One well-documented website lists and links to 65 different papers on the subject, many of which, on the surface, seem to support this claim. Could this many studies all be wrong? Recent analysis by Avi Bitterman, a dermatologist in New York, and Scott Alexander, a prominent blogger, suggests that the answer is nuanced. Ivermectin probably does help one subset of covid-19 patients: those who are also infected by the worms it was designed to fight.

Wading through the papers whose methodologies appeared sound, Dr Bitterman noticed that the studies that looked best for ivermectin tended to cluster in regions with high rates of infections by strongyloides, a parasitic worm. Common in much of Africa, Asia and Latin America, strongyloides can cause, among other things, diarrhoea, fatigue and weight loss. However, they only pose a graver threat if their numbers grow out of control. Such “hyper-infection”, which is often fatal, becomes far more likely if a patient is receiving corticosteroids, which both suppress the immune system and appear to make female worms more fertile. And dexamethasone, a corticosteroid, is now a standard treatment for severe covid-19, because it prevents the immune system from going into overdrive and attacking the body’s own cells.

Building on observations by David Boulware, a professor of medicine at the University of Minnesota, Dr Bitterman concluded that strongyloides may account for the conflicting results of studies about the effectiveness of ivermectin as a treatment for covid-19. In trials conducted in countries where the parasites are common, many people could have both covid-19 and strongyloides infections. Covid-19 might already have weakened their bodies’ defences against the worms; treating the coronavirus with corticosteroids would let the parasites run wild.

In the groups who received ivermectin during trials, the drug would keep strongyloides in check. But patients in control groups would be left at the worms’ mercy. This would make it look as if ivermectin were preventing deaths caused solely by covid-19, when in fact it was preventing those caused by the parasites or by a combination of the two infections. This mechanism would explain why most studies conducted in places where strongyloides are rare showed no benefit from taking ivermectin. “Ivermectin doesn’t treat covid,” Dr Bitterman wrote. “It treats parasites (shocker) that kill people when they get steroids that treat covid.” He concluded that “taking strongyloides endemic populations, putting them into a control group with corticosteroids is a death sentence”.

In July 2020 a group of doctors argued in the Journal of the American Medical Association that it was “reasonable to consider presumptive treatment with ivermectin for moderate- to high-risk patients not previously tested or treated for strongyloides”, and said that the risk of infection by the worms in covid-19 patients should be “based on factors such as country of origin and long-term residence”. The World Health Organisation also recommends ivermectin in this context. However, most people in rich Western countries like America—where demand for ivermectin, driven by advocates on social media, is so high that some people have resorted to taking the equine version of the drug—do not fit this description. At least when treating patients who have never been to countries with widespread strongyloides, the evidence suggests that mainstream doctors in such places are right to avoid prescribing ivermectin.

None of this, of course, suggests that vaccinations are less efficacious than ivermectin in preventing death from the virus alone, much less, as Bret Weinstein and Heather Heying suggest, you’re better off not getting vaccinated than getting vaccinated. Just get tested for worms if you get covid and live in a roundworm-infested part of the world!

*Note that Fisher has been canceled.