I’m still pleading for photos, so if you have some, and they’re good, please send ’em in. Thanking you in advance.

Today’s contribution comes from regular Tony Eales, who gets to see all kinds of weird Aussie fauna, including these fearsome-looking spiders. His captions are indented, and you can enlarge the photos by clicking on them.

As it is springtime and life is abundant right now in this hemisphere, I have been spending a lot of my free time doing night walks in the local substropical rainforest around Mt Mee and Mt Glorious near Brisbane, Australia.

One type of spider that has been attracting my interest of late are members of the Trapdoor and Wishbone spider families, Idiopidae and Anamidae respectively. I feel like most people have a general sense of what trapdoor spiders are like. They are generally tarantula-like spiders that live in burrows, often with a lid.  Wishbone Spiders are similar but do not build lids to their burrows and the first part of their burrow is Y-shaped with a main hole and a concealed escape hole. Both of these families are in the suborder Mygalomorphae, one of the major subdivisions of spiders. Mygalomorphs are generally large, robust and long-lived (two or more decades) spiders with strong downward-pointing fangs, two pairs of book lungs and heavy large bodies relative to their leg length.

Despite looking like an arachnophobe’s worst nightmare, most are not dangerous to humans (aside from the funnel-web spider family which are ridiculously toxic), but because of the size and strength of their fangs can, if mishandled, deliver a deep and painful bite that is often capable of piercing fingernails and leather.

The most common trapdoor spider that I encounter, by far, are members of the genus Arbanitis.

At night you can see them sitting at the entrance of their burrows, only retreating when you get within about a foot of them. They are relatively easy to coax out by imitating a bug walking past using a small twig. Arbanitis will rush out and grab the twig and hold it. You gave gently pull back on the twig and the spider will continue to grip it until it is nearly entirely out of its burrow. It reminded me in some ways of playing with a cat using a piece of string. 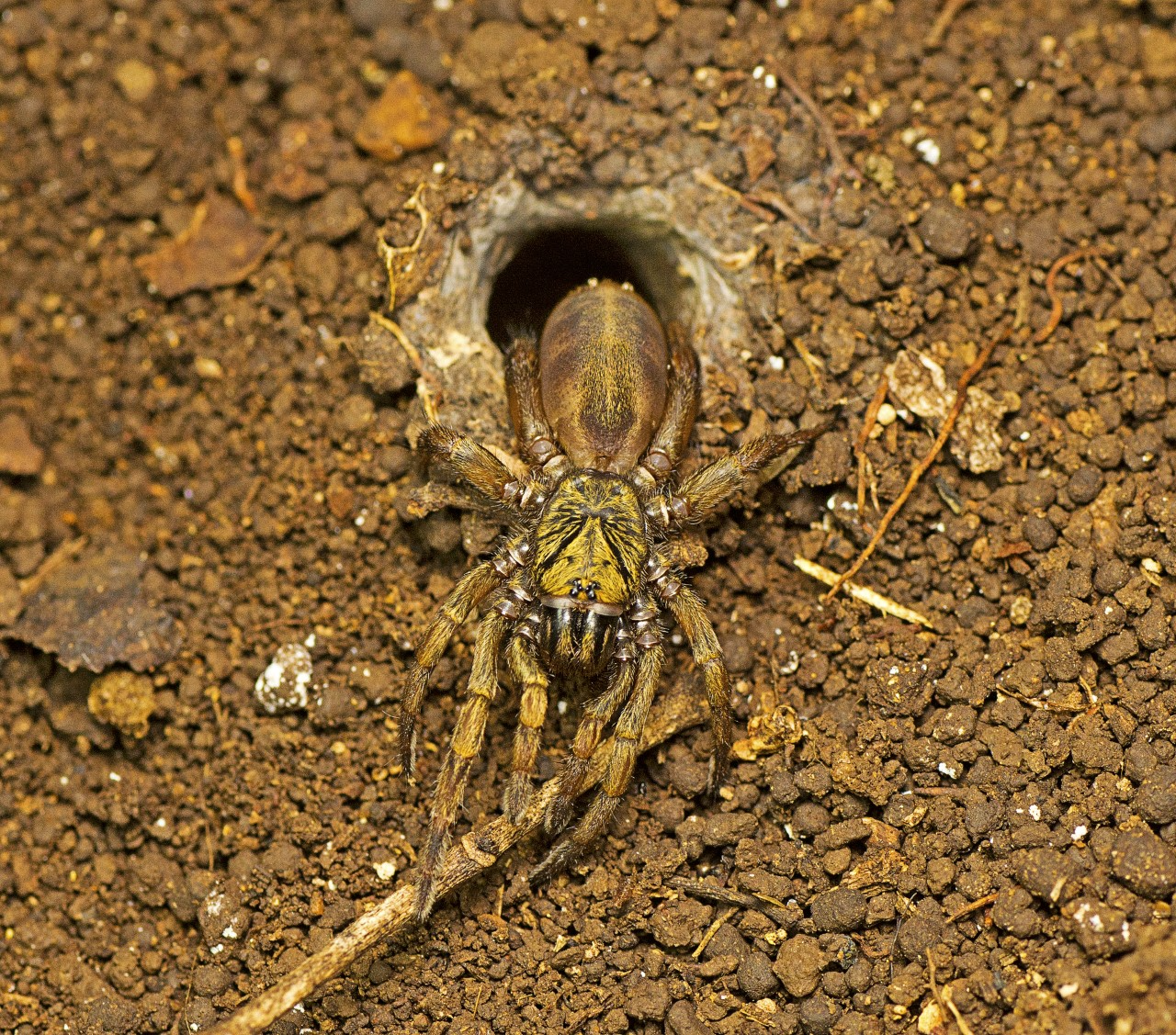 Females live their entire lives within a burrow, moving only if erosion causes the burrow to be damaged. Males on the other hand do wander around on humid nights, looking for females to mate with. This is a very dangerous proposition for the males. Firstly, if the humidity is too low, they could literally suffocate as their book lungs dried out. And apart from larger predators and parasites, the females with whom they want to mate are large ravenous killers. Hence, male Arbanitis spiders as well as many other trapdoors have spurs on the first legs. These are used to hold the female fangs at bay while they fertilise the female. You can see these spurs on this male we found wandering the walking track at night. 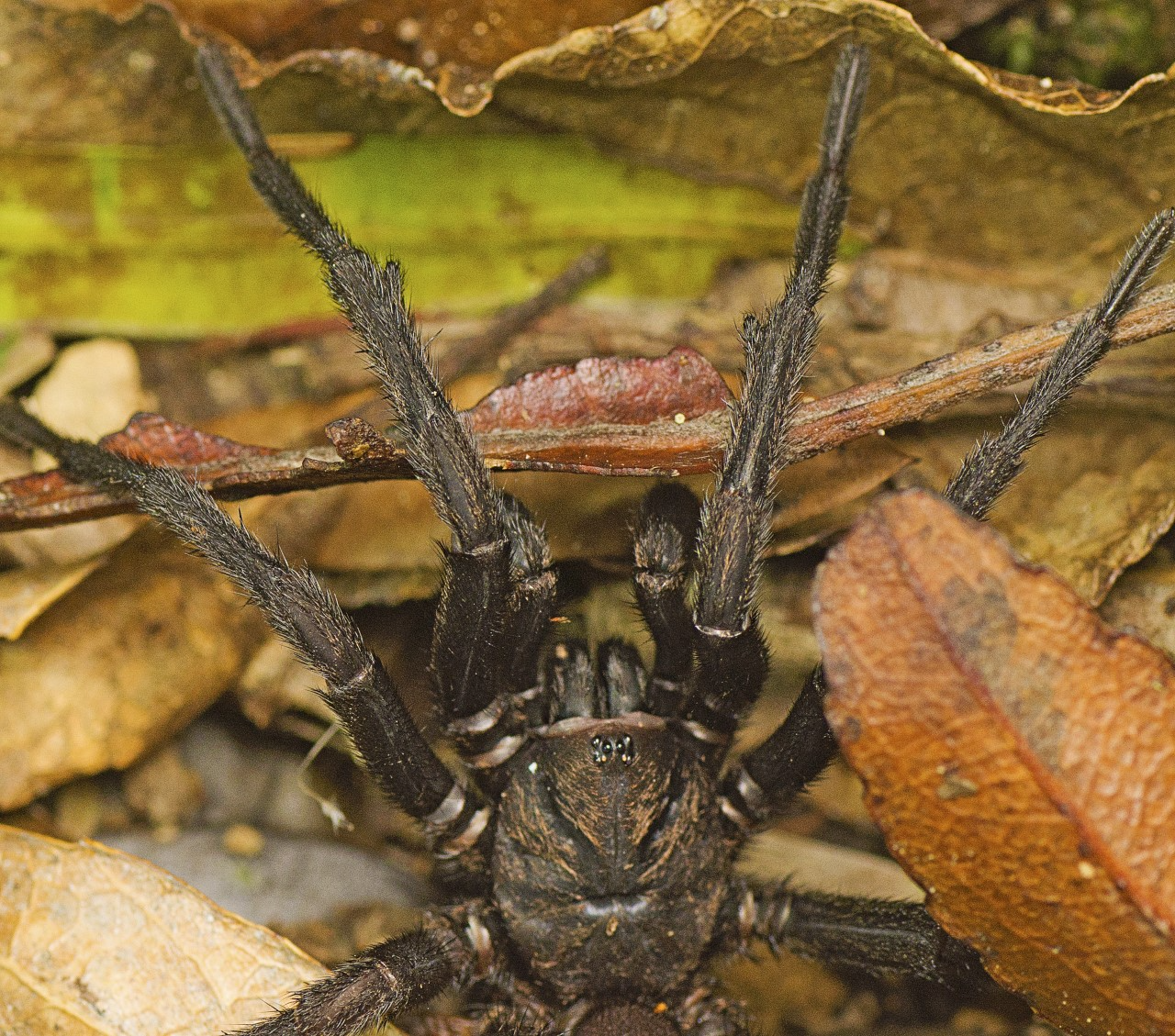 These spurs are lacking in the rainforest wishbone genus Namea and the spiders of both sexes seem to be less tied to spending all of their time in their burrows. I found this female just wandering about. The genus Namea has a very high degree of endemism in the D’Aguilar Ranges near my home with some 15 species described in a relatively small area. Consulting with knowledgable folk I am informed that the one I found is likely either the relatively common (in the area) Namea gowardae or possibly the rarer Namea gloriosa. As with many of these, it takes microscopic examination of reproductive features to get a species-level ID. 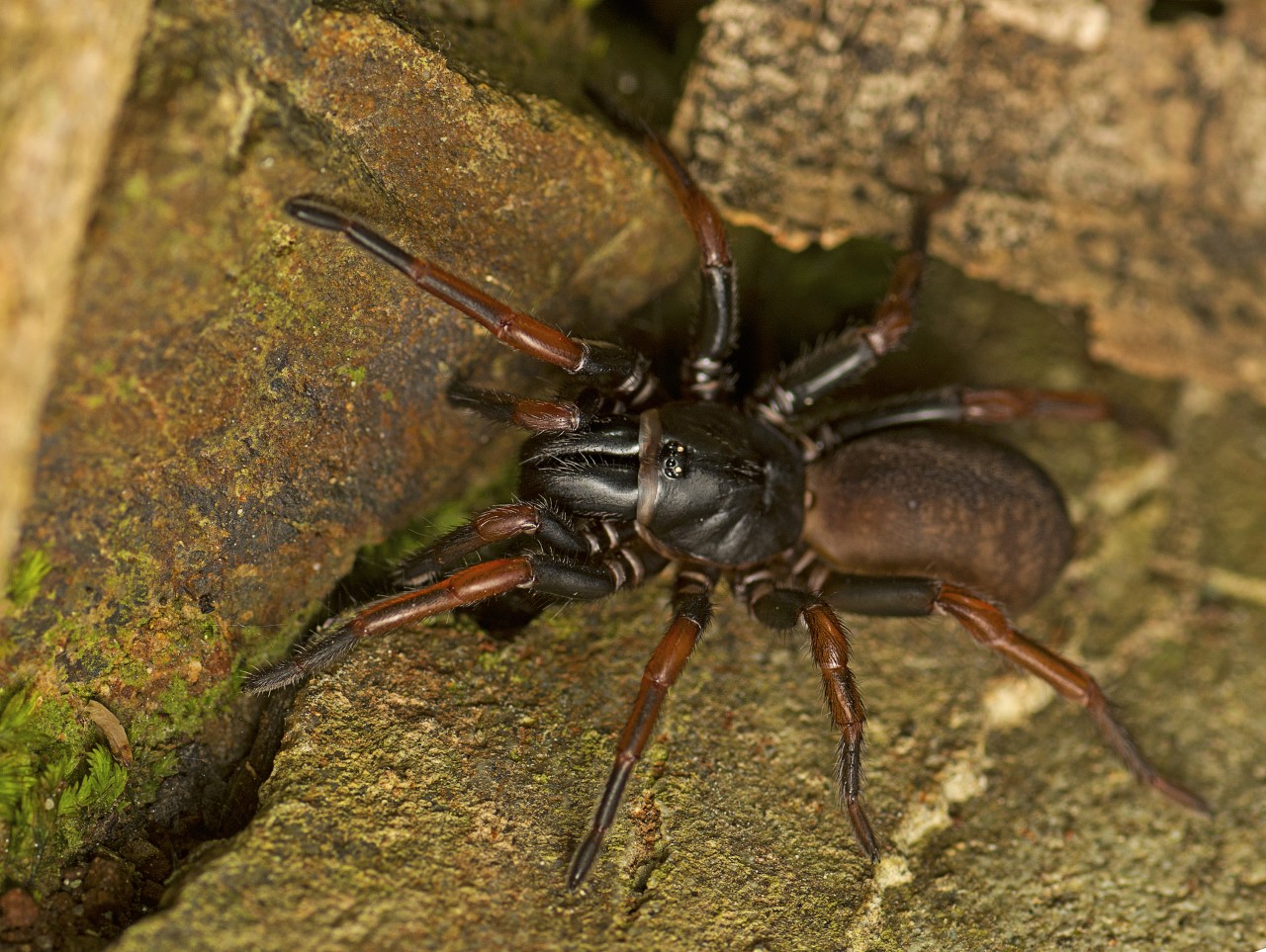 Likewise, the spiny trapdoor spiders in Euoplos show a high degree of local endemism at least around Brisbane and South East Qld where I live. However, it may be that this endemism is widespread and it is only our knowledge of it that is high in SEQ—in no small part, because this is where the busy and science-outreach loving Robert Raven works at the Qld Museum.

In any case, thanks to his and others’ work (detailed here) I can be relatively confident that this massive girl is Euoplos regalis. Photographing her was much more difficult than the Arbanitis. She could likewise be coaxed out using a twig to imitate a walking bug but she played no cat and mouse with the false prey. Watching closely, you could see the trapdoor lift by less than a mm as she became interested in the vibrations. Then, without warning, she burst out of the burrow, enveloping the end of the twig then retreated immediately slamming the lid shut. The whole thing took around a second and left my son and I with elevated heart rates. In any case I was very lucky to time the shot to get a good look at her. This was on the second of three attempts and both the other attempts failed to capture her. 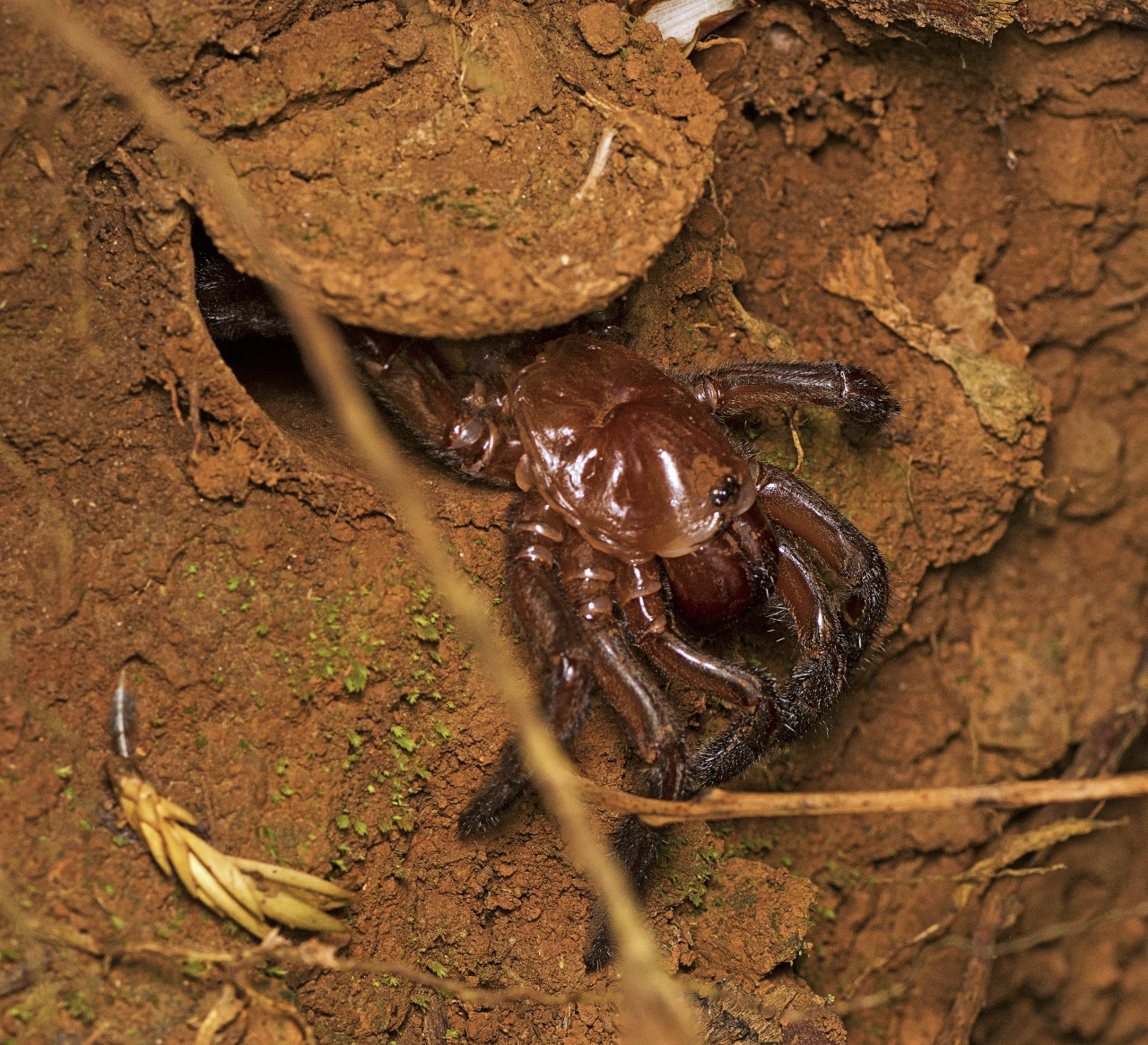 Another trapdoor spider that are relatively common in the area are members of the genus Cataxia.  These too have a lid to their burrows but it is not a hinged door like Euoplos but is more like a tarp that they pull down over their hole. I didn’t get any out-of-burrow shots of this genus. The ones I found were relatively small and were at random orientation to the ground. 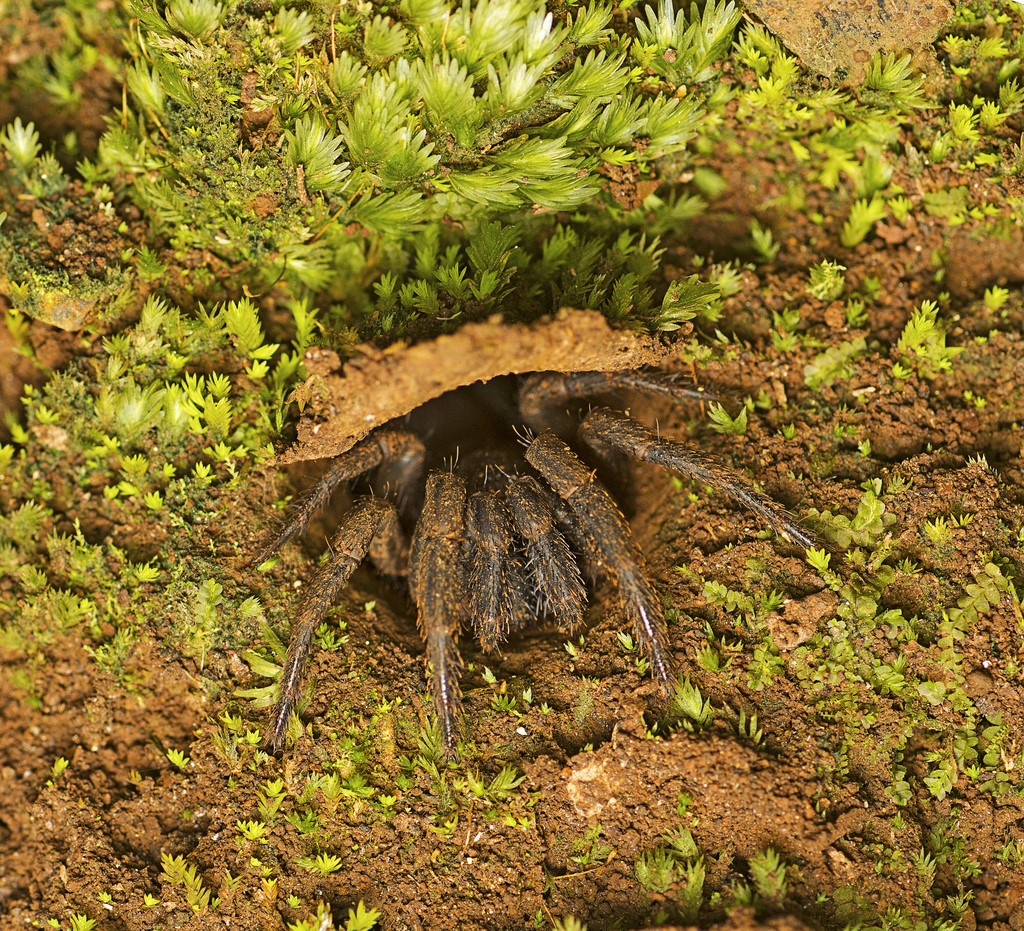 It’s also worth noting that while burrow-living Mygalomorph spiders might occur anywhere in Australia, when it comes to the drier areas, most of the burrows you find are not built Mygalomorphs.  Instead, these are built by Araneomorph spiders (aka Typical Spiders) of the Wolf Spider family, Lycosidae. I’ve found it hard to photograph the owners of these burrows as they slam them shut long before I get close enough to photograph them. This one I found open, the owner probably taken by a spider wasp or a bird. 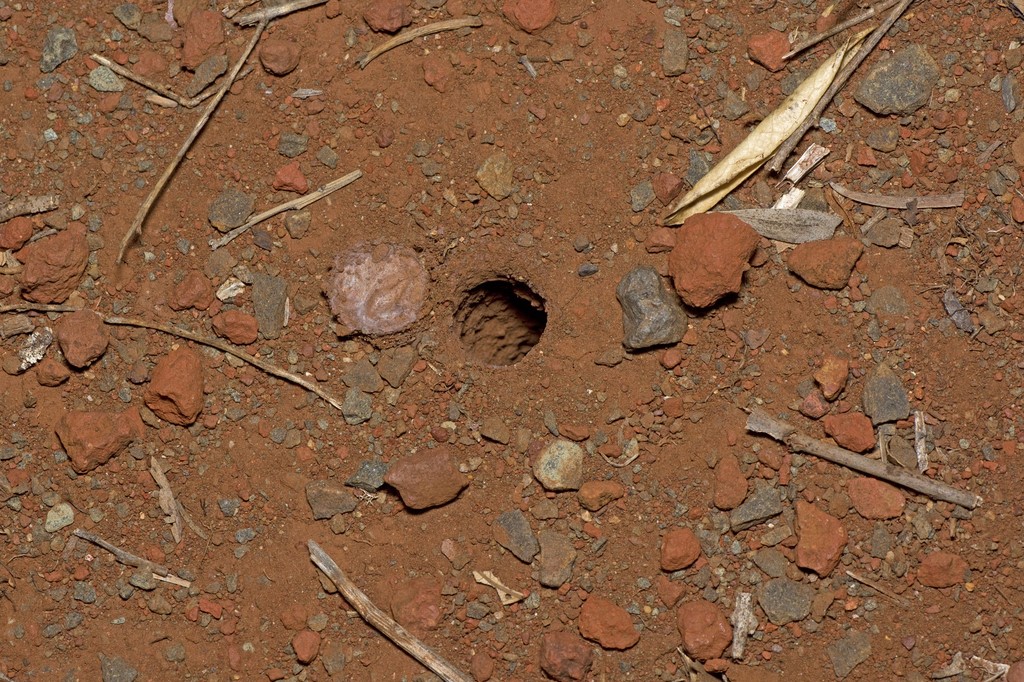 The wolf spiders without lids to their burrows are somewhat easier to approach and I photographed this Hoggicosa sp. on a sand dune in Diamantina National Park. 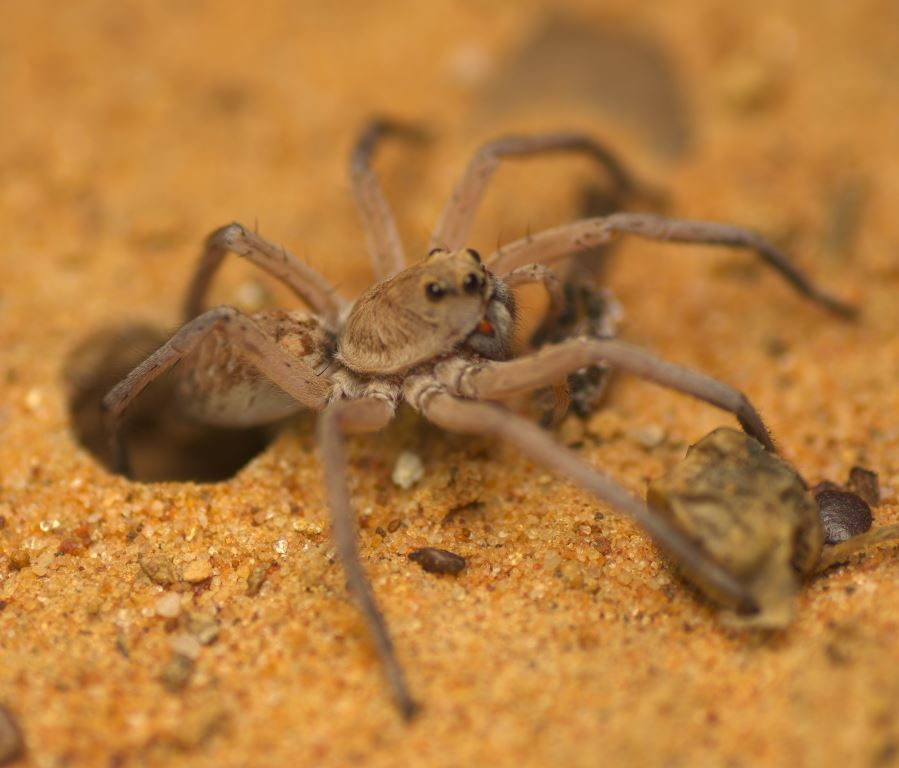