An article from Open Culture describes a wonderful and educational children’s book from 1911. Click on the screenshot to go to the article.

Here’s the book, with a frontispiece showing a cat saying, “I am the Queen.” Indeed! 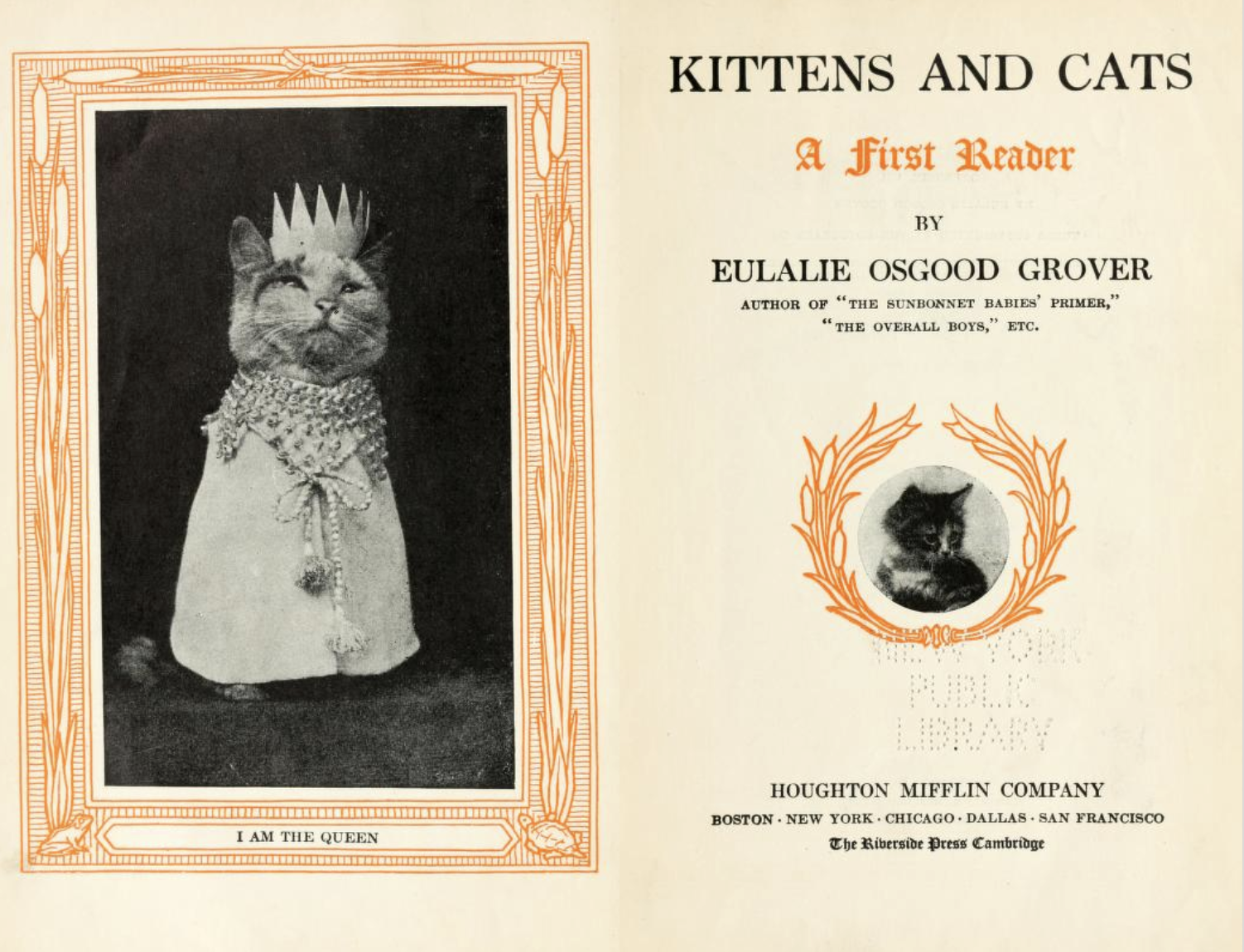 Unlike our 21st-century cat memes and other such online feline-based entertainments, children’s author Eulalie Osgood Grover’s 1911 work, Kittens and Cats: A First Reader was intended to educate.

Its related poems will almost certainly strike those of us whose understanding of feline attitude has been shaped by LOLCats, Grumpy Cat, the existential Henri, Talking Kitty Cat’s acerbic Sylvester, and the mordant 1970s TV spokescat Morris as sweet to the point of sickly. But it boasts six hundred vocabulary words, a rhyme structure that promotes reading aloud, and a note to teachers with suggestions for classroom activities. 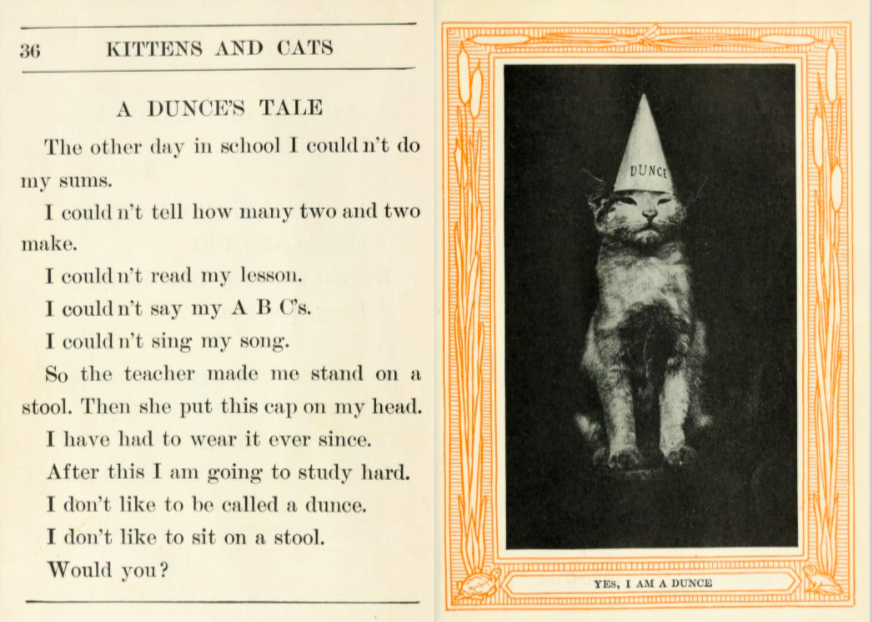 Grover explained how her feline cast of characters would win over even the most reluctant reader, inspiring “much the same delight to the little reader of juvenile fiction, as do adventure and romance to the grown-up reader”:

In one respect kittens take precedence over dolls. They are alive. They must be treated kindly. They will not bear the abuse and neglect given to many beautiful dolls. They demand attention and companionship, and they return a real devotion in return for kindness and care. Therefore we love them and especially do our children love them and delight in stories of them.

The loosely structured story concerns a grand party thrown by the Queen of the Cats. Following some breathless preparations, the guests take turns introducing themselves to her majesty, though unlike T.S. Eliot’s Old Possum’s Book of Practical Cats (1939), there’s not much that could be cobbled into a hit musical.

. . .One lace-bonneted character is reminiscent of Tom Kitten’s mother, Mrs. Tabitha Twitchit, and her unsuccessful attempts to wrangle her rambunctious offspring into clothing fit for “fine company,” though the wit falls somewhat short of Beatrix Potter’s.

Headgear abounds, as do restrictive buntings that must’ve been a great help when dealing with uncooperative models and long exposures. 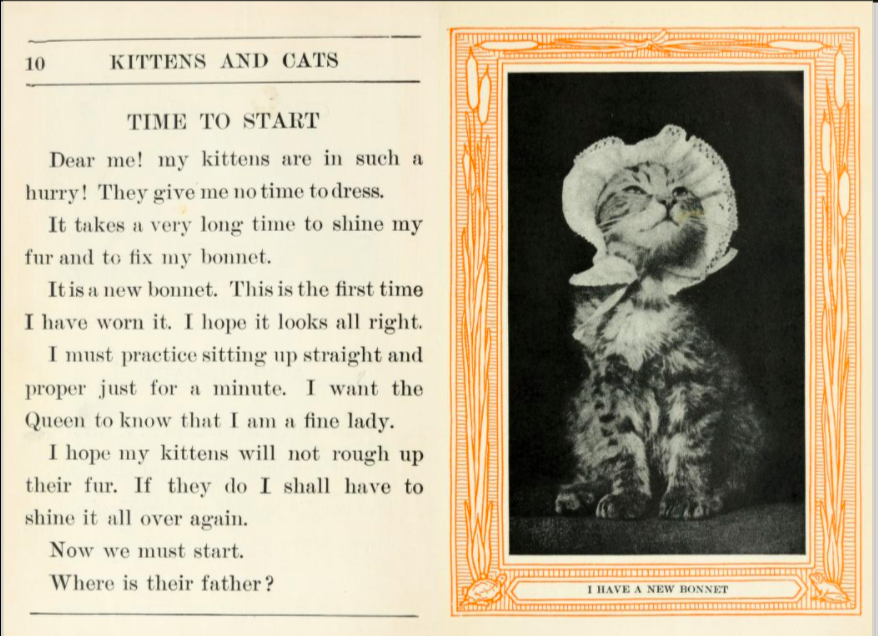 Two more. Don’t forget to read the captions under the pictures: 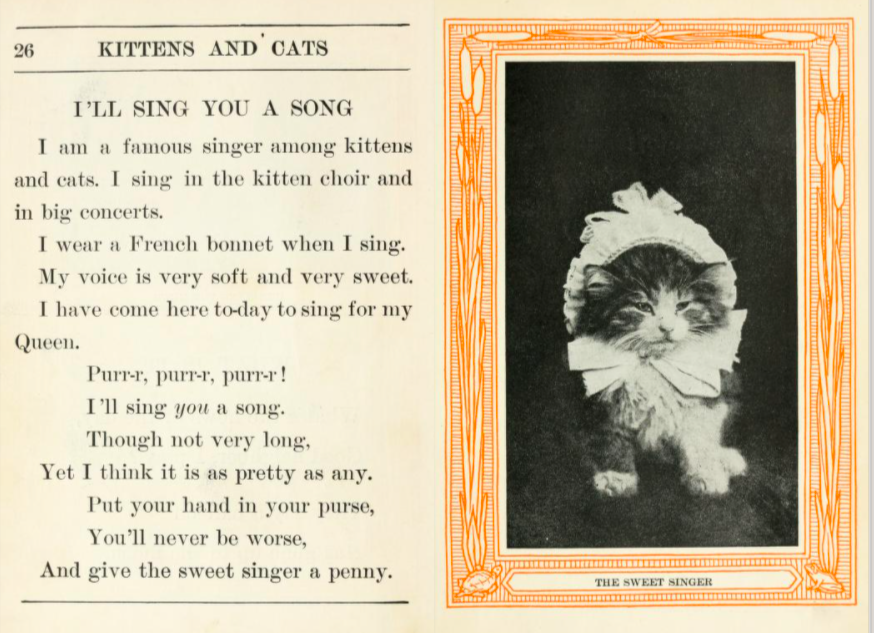 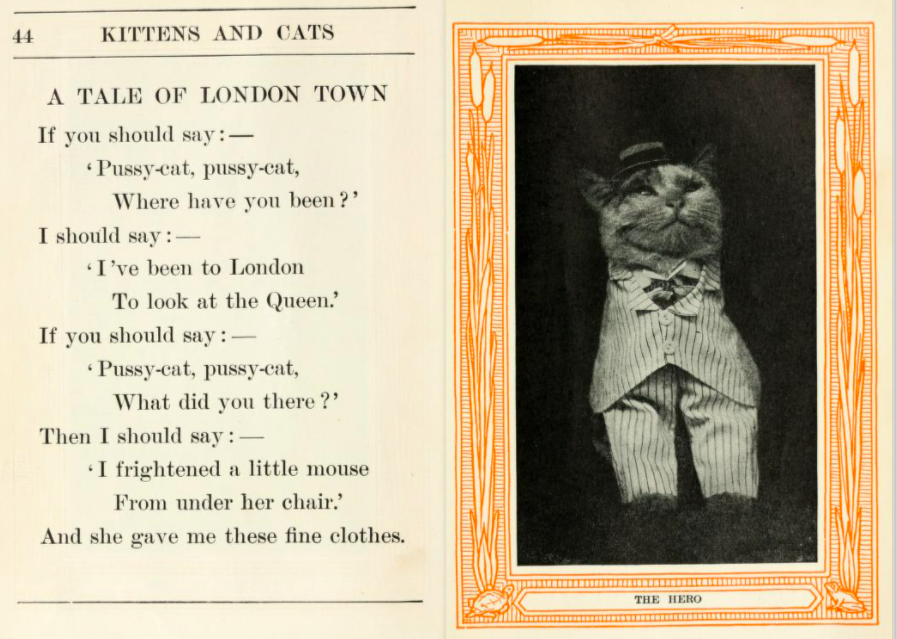 Wouldn’t this make a great present for a young cat-loving child? In fact, you can download the whole book for free here (you have to register, but it’s free.)

Here’s an interesting discussion from Live Science (click on screenshot):

First I was doubtful, because I thought I’d read somewhere that tigers lions can purr. But apparently they can’t. This article tells us why:

So, why can’t house cats roar? Goodness knows it would help them get their way around the house (even more so than they do already).

It has to do with the physiology of the cat’s voice box and throat, which help create these feline vocalizations. Because of the way purrs and roars are made, these sounds are mutually exclusive in cats — any given cat species can either roar or purr, but not both, said John Wible, curator of mammals at the Carnegie Museum of Natural History in Pittsburgh.

Purring is a unique sound because it’s created both when the cat breathes in and when it breathes out. The vocalization seems to have evolved first in cats and is widespread in the Felidae family, Wible said. Cats that purr include the house cat, bobcat, ocelot, lynx, cougar and cheetah.

“Roaring is much rarer among cats and evolved in a particular lineage of large cats,” Wible told Live Science in an email. These cats make up the Panthera genus, which includes lions, tigers, jaguars and leopards. One exception here is the snow leopard, which may have lost its ability to roar, according to Wible and a study in the Journal of Anatomy.

As in humans, the sounds cats make come from their voice box, called the larynx. The difference between purring cats and roaring cats starts here, though exactly how cats make these sounds are unclear, Wible said.

Roars come from bendy bones in the throat.

The mammalian voice box is in the throat, where air passing by its structures creates sounds. The hyoid bones and the vocal cords are two essential parts of the larynx that produce vocalizations in cats.

“All mammals have bones in their neck close to the lower jaw that are the hyoid apparatus, and these bones have a connection to the base of the skull, either directly or via ligaments,” Wible said. One of the significant differences between roaring species and purring species lies in the hyoid.

“The roarers have a unique arrangement for one pair of the bones of the hyoid apparatus, called the epihyoids,” Wible said. “Rather than bone, the epihyoid is an elongated elastic ligament.” The flexible cartilage allows the animals to lower the voice box in the throat, producing a deeper-pitched sound.

There’s more, too, but this is enough; you know the difference and have some idea why.

As a reward, here’s a Siberian lynx purring. It’s LOUD, almost like a propeller plane ready for takeoff:

If you have a cat who’s a “paw dipper”,  you’ll want the answer to this question, too. Click on the screenshot to find the answer at Mental Floss.

There are at least three reasons (of course none of them have been scientifically tested, so they’re in the “sounds good to me” category):

According to cat behavior expert Pam Johnson-Bennett, cats have a number of motivations for wetting their paw. One relates to the sensitivity of their whiskers. If a cat dips their head into a bowl before sampling how shallow or deep it might be, they run the risk of feeling pressure on the hairs from the sides or bottom of the bowl. To avoid the discomfort, cats will assess the bowl’s “feel” or just use their paw like a spoon, slurping water from it to avoid irritating the hairs.

Cats dislike deep water bowls for another reason. If lowering their head inside one means they can no longer visualize their environment, they might feel vulnerable, especially in a multi-cat household. If the bowl is too close to the wall, this may motivate them to use the paw-as-utensil trick as well, otherwise they’d have to keep their back turned toward the room in order to drink from it.

Cats may also dip their paw because it creates ripples in the water. This may be of interest to them for two reasons. One, cats may have an instinct from an evolutionary standpoint to choose water sources that are flowing rather than stagnant and potentially harmful. (If they prefer moving water, you might catch them drinking out of faucets.) Two, the cat may be doing it for amusement.

The lesson: use shallow bowls for your cat’s water.

Here’s a video that gives other untested explanations:

Lagniappe: Reader Paul went to the Cat Art Show in Los Angeles, and sent me a selection of some of the artworks. 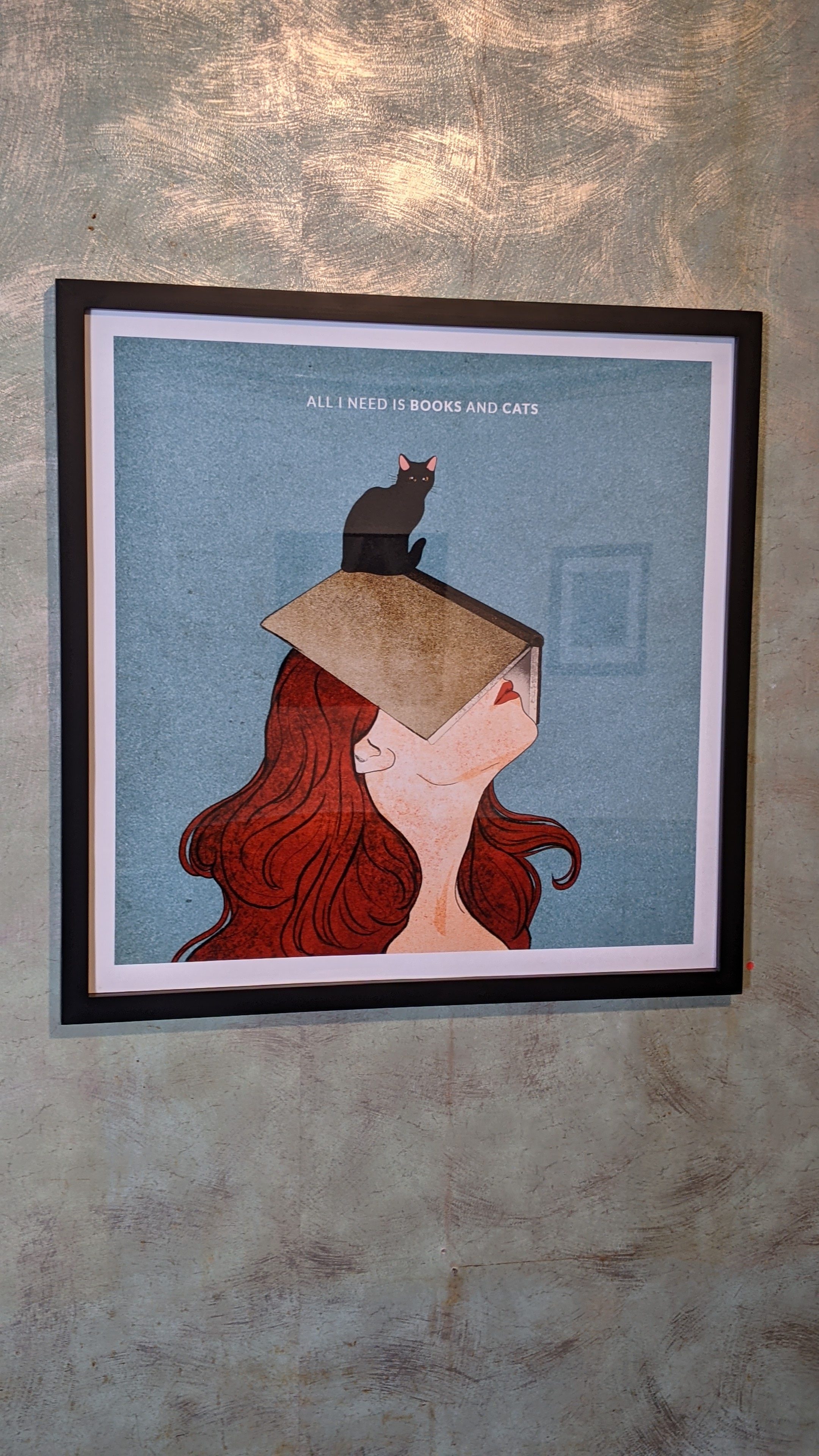 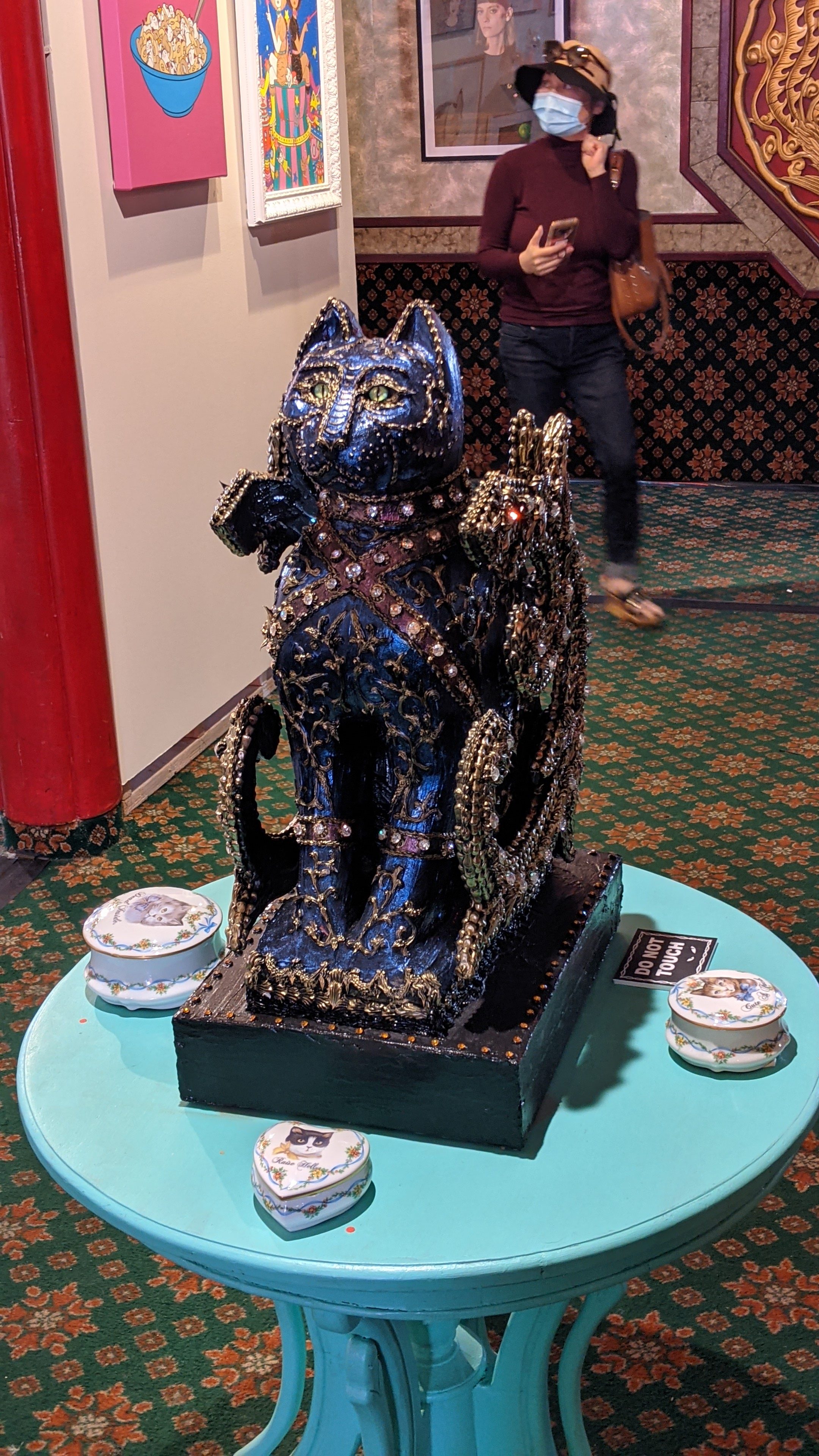 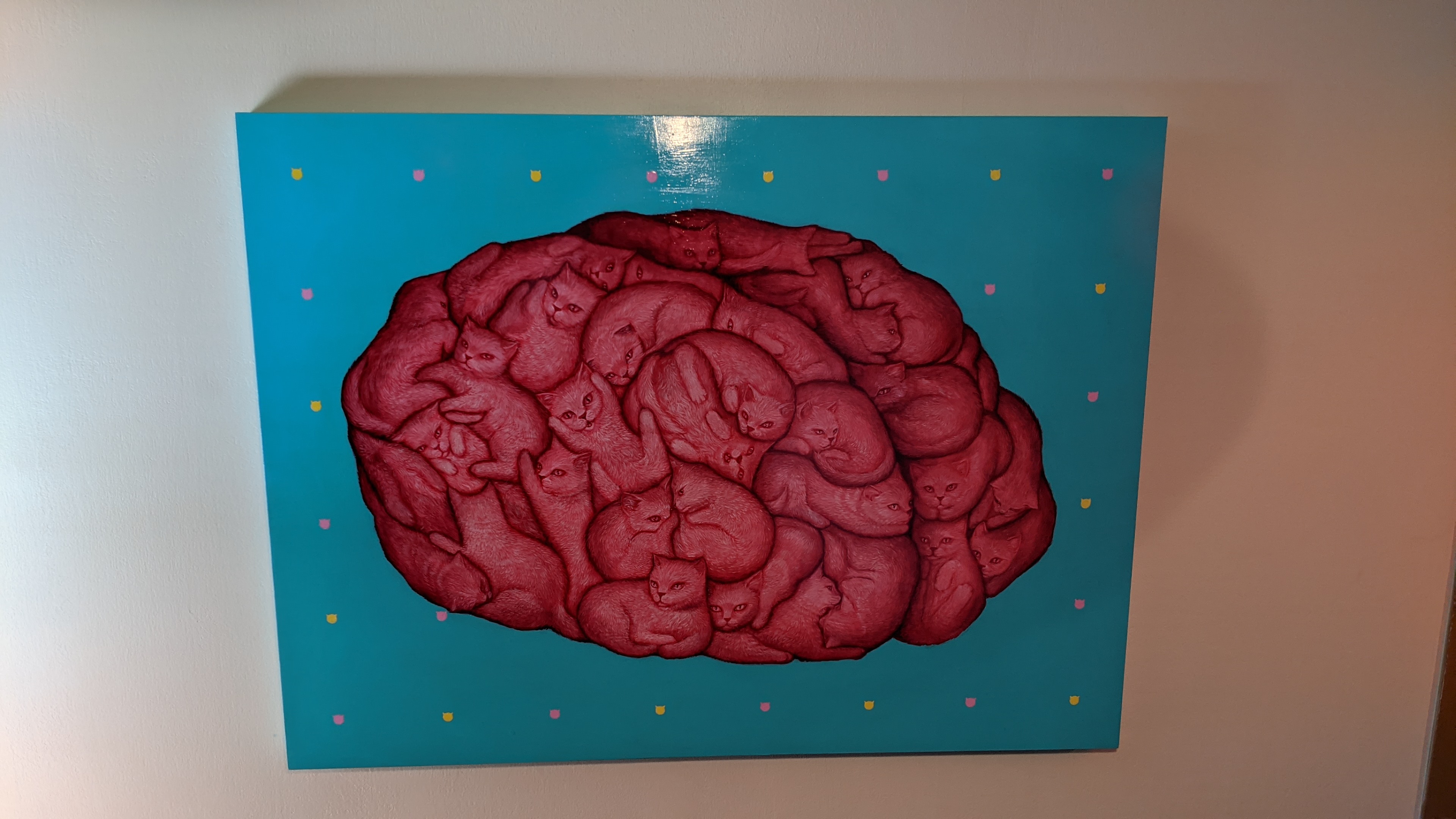 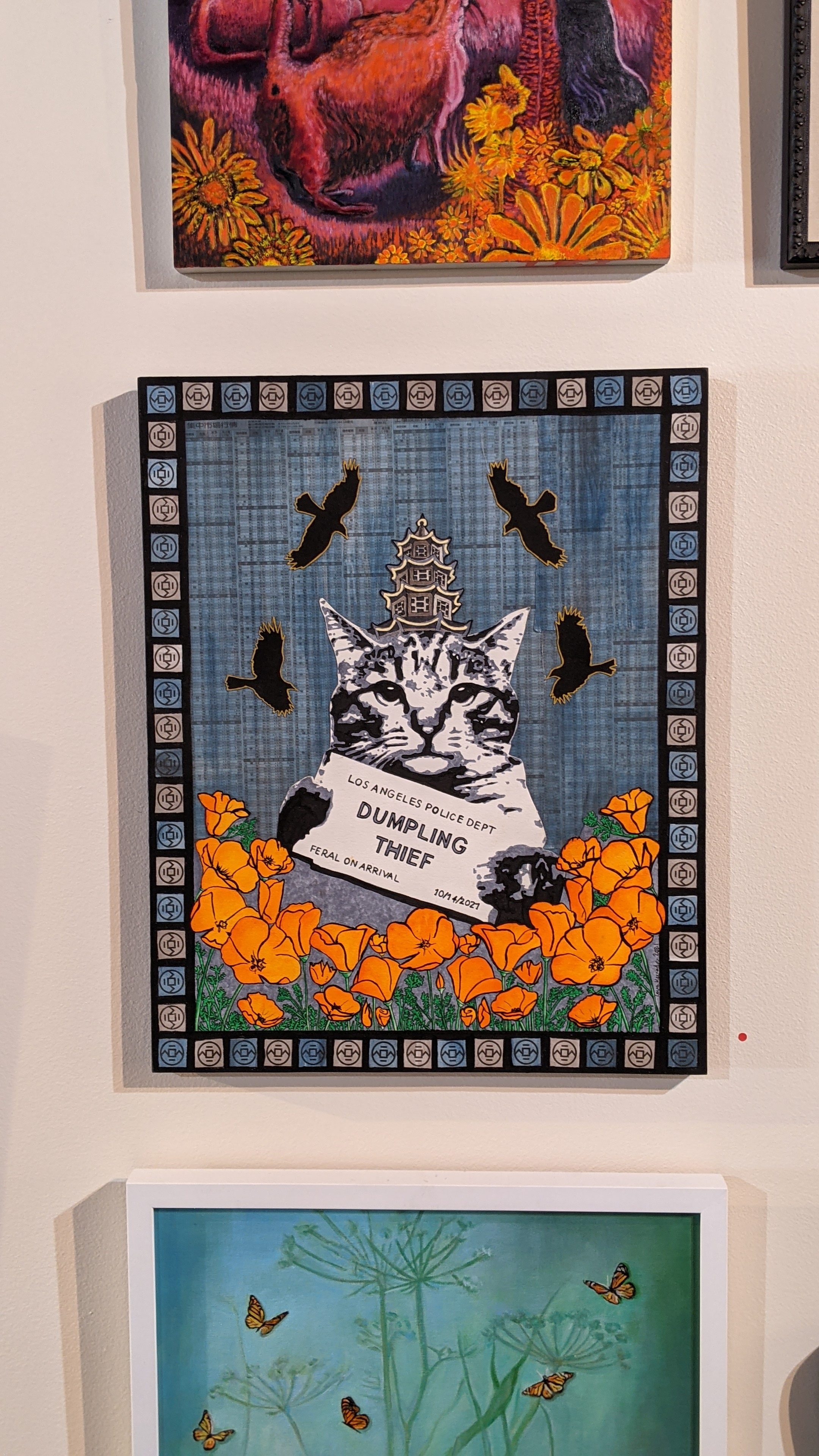 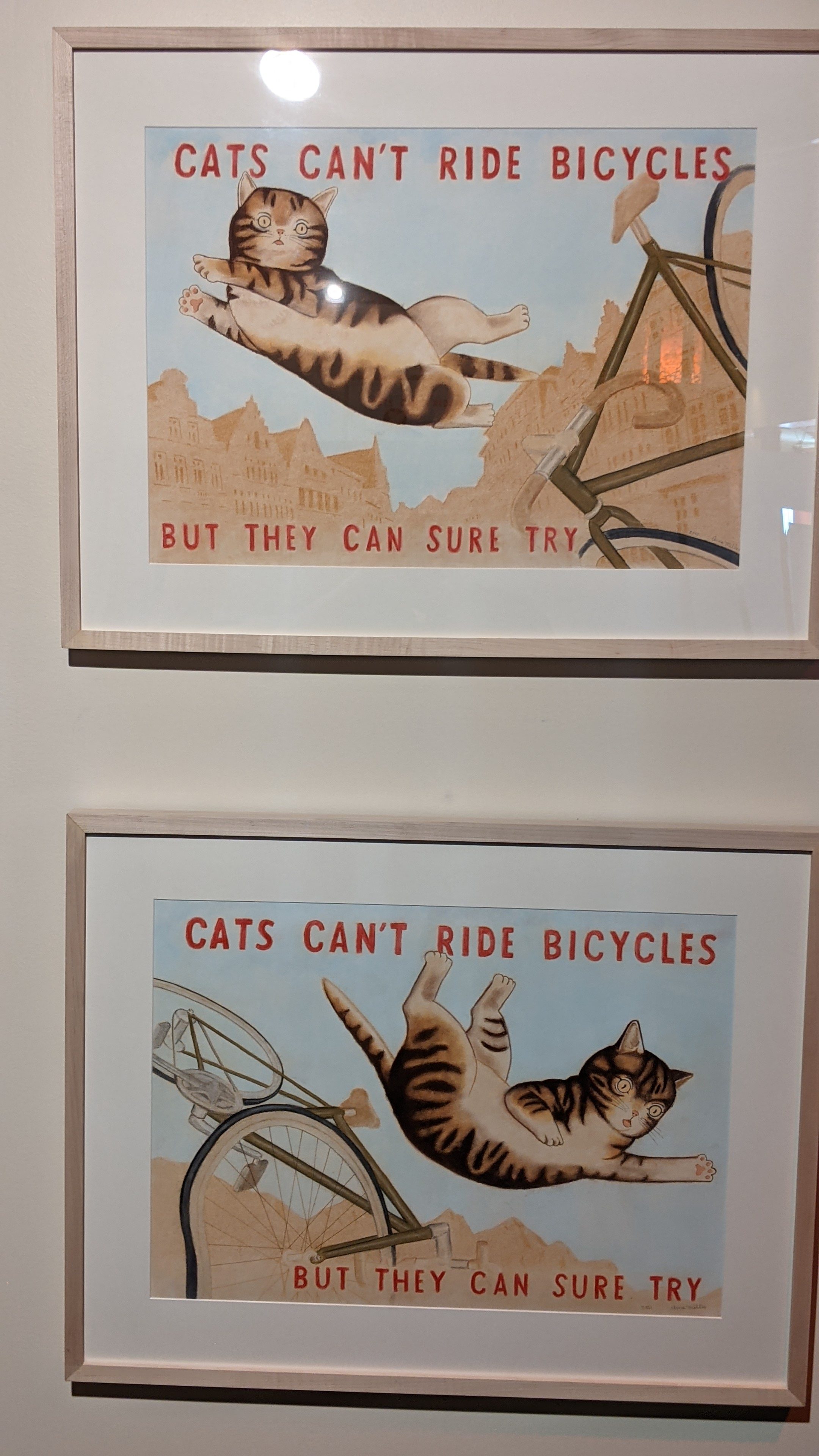 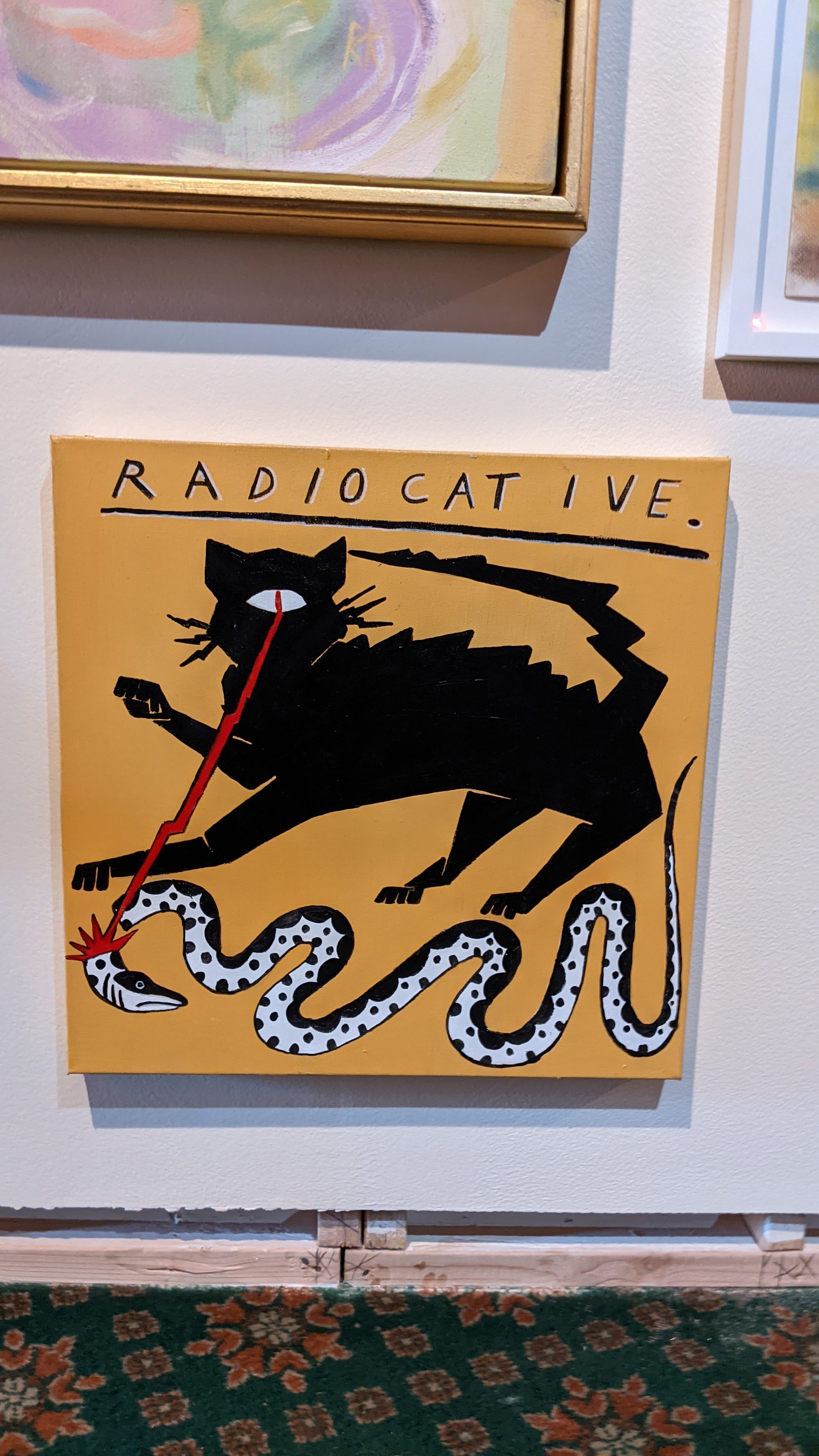