It seems that much of the gubernatorial election in Virginia turned on the issue of Critical Race Theory (CRT) being taught in schools. Youngkin denounced it while McAuliffe deprecated parents’ “rights” to have a say in their kids’ schooling.  After McAuliffe’s loss, upset Democrats accused the Republicans of “dog whistling”: using CRT as a cover for their racism and white supremacy.  In this week’s main article on Andrew Sullivan’s website, he notes that this criticism may have held a wee bit of truth, but in general was wrong.  His thesis:

What has happened this past week, I suspect, is that the woke revolution has finally met its match: educated parents. People can tolerate sitting through compulsory “social justice” seminars, struggle sessions, pronoun rituals, and the rest as adults, if they have to as a condition of employment. But when they see this ideology being foisted on their children as young as six, they draw a line.

I believe you can read his piece for free by clicking on the screenshot below.  But again, I urge you to subscribe if you read him frequently. 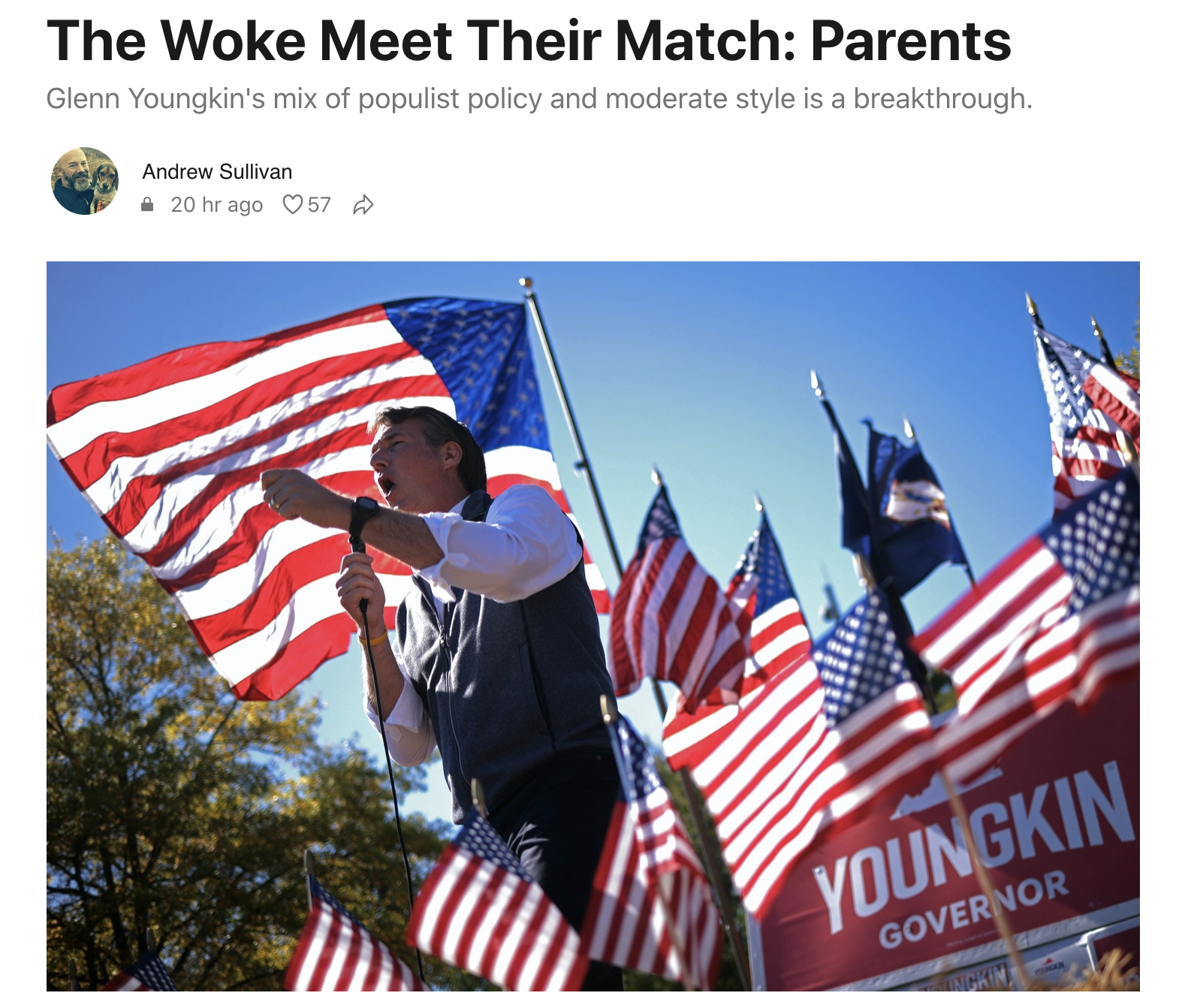 The one bit of Sullivan’s column I disagree with is the almost palpable joy with which he greets Youngkin’s victory.  Who can be happy that a Republican, particularly one who may have a covert agenda that may jibe with many Republican stands? But you could argue as well that this is a necessary wake-up call for the Democrats to reorganize, listen to the electorate, and thereby promote future victories. Only a major loss—or, in this case, the repudiation of several Woke initiatives throughout the U.S., could do that.

Dems have also argued that CRT was not being taught in Virginia schools. Well, not in the academic form, but Sullivan dispels that with some data. I’m giving a long excerpt here, for it contains links you can consult. Emphasis below is mine:

Look at recent polling. A big survey from the Manhattan Institute of the 20 biggest metropolitan areas found that the public, 54-29, wants to remove CRT concepts such as “white privilege” or “systemic racism” from K-12 education. That includes black parents by a margin of 54-38. And that’s in big cities. A new Harris poll asked, “Do you think the schools should promote the idea that people are victims and oppressors based on their race or should they teach children to ignore race in all decisions to judge people by their character?” Americans favored the latter 63-37.

Matt Taibbi found Virginia voters miffed by “the existence of a closed Facebook group — the ‘Anti-Racist Parents of Loudoun County’ — that contains six school board members and apparently compiled a list of parents deemed insufficiently supportive of ‘racial equity efforts.’” He found Indian and South Asian parents worried about the abolition of testing standards, as well they might be. And at school board meetings, in a fraught Covid era of kids-at-home, parents have been treated with, at best, condescension; and at worst, contempt. Remember how the National School Boards Association wanted the feds to designate some protests from these angry parents as “a form of domestic terrorism and hate crimes” — and then withdrew that request?

The argument continues in the piece, but I’ve given the gist. So long as teachers and schools are pushing stuff that divides the children, so long as they repudiate Dr. King’s emphasis on character rather than color, then for that long the Democrats will continue to lose. Every time a kid comes home saying that she’s learned she’s bad because she’s white, the Democrats let a vote slip away.  As Sullivan says:

Nobody here, least of all me, claims that we should soft-pedal America’s history taught in full honesty: not only its glories but its abysmal failures, including its racism and the genocide of Native Americans. The textbooks and history lesson do need to be honest. But this is America, the “gumbo of diverse ingredients” that Carville describes, and in the end kids need to see it as it is—and was.  What should be taught are the facts, leaving out the ideology of CRT.

At the end Sullivan embraces the “Youngkin version of Republicanism”, saying that “he hopes it lasts.” I don’t, for I think Youngkin, while savvy about parents and schools, has a raft of Republican horrors up his sleeve. Get set for Virginia to pass a Texas-style anti-abortion bill.

40 thoughts on “Andrew Sullivan on the election and CRT”