It’s Caturday, and we have the usual three items—plus lagniappe at the bottom.

This first short video shows a cat confused by a card trick. Actually, the cat isn’t really confused, but responding appropriately to what it’s seen before when a hand is thrown out with an object in it. Do try this at home, but don’t drive your cat nuts!

Here’s an 8-minute scientifically accurate video explaining how cats were domesticated (twice). I think the “commensal pathway” is the most likely as well. The video also explains why there’s far more variation among dog breeds than cat breeds. (I am sure we could breed domestic cats to look like dachshunds or to be as large as St. Bernards. It would just take time.)

Here’s the Cyprus burial that shows the first evidence of cat domestication about 9,000-10,000 years ago (it’s mentioned at the video’s beginning): 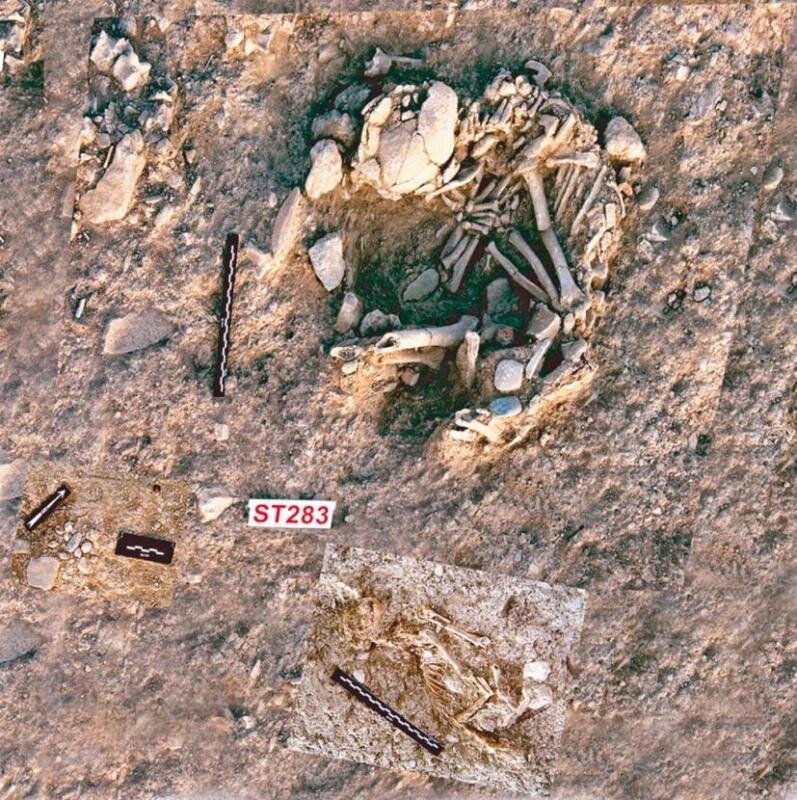 Why DO cats wiggle their butts before they pounce? You know the behavior: the one shown below as Tom, a tuxedo male, attacks the ginger and white Mimi:

Here are some of the theories described by John Hutchinson, a professor of evolutionary biomechanics at the Royal Veterinary College in London:

According to Hutchinson, butt-wiggling may help press the hindlimbs into the ground to give cats added friction (traction) for pushing them forward in the pounce. “It may also have a sensory role to prepare the vision, proprioception [an awareness of one’s position and movement] and muscle — and whole cat — for the rapid neural commands needed for the pounce,” Hutchinson noted.

Butt wiggling may also give the cat an aerobic warm-up, of sorts.

“It probably does stretch the muscles a bit and that might help with pouncing,” Hutchinson told Live Science. “And we can’t exclude that it’s just fun for cats; they do it because they are excited by the thrill of the hunt [and] prey.”

Big wild cats like lions and tigers show the same behavior. But Hutchinson concludes that we really don’t know the answer, which is what I’ve realized over the years.

An ideal experiment would have cats pounce with and without butt-wiggling, so scientists could determine what effect wiggling (or lack thereof) has on their pouncing performance, Hutchinson said.

Granted, Hutchinson has a lot on his plate, but he joked that “it must be done, somehow. I shall marshal some scientists, and some friendly cats, in due course.”

Now, however, I see THIS article from the Pasadena Humane Society brazenly claiming that we now know the answer. What is it? Click on the screenshot: 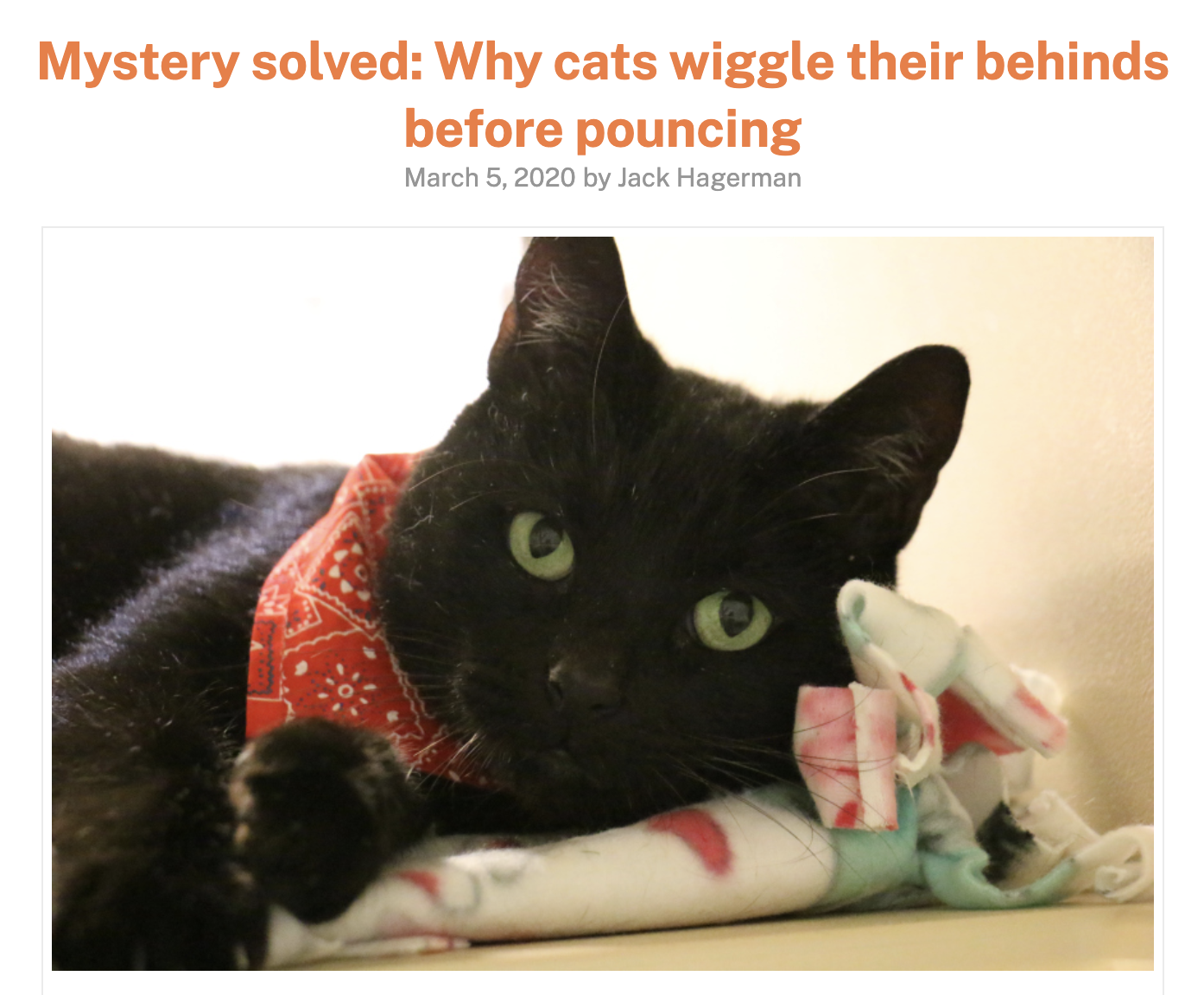 So what does Hagerman do? He consults Hutchinson, who’s already described all the theories and said that we don’t really know the answer.  So Hagerman just picks one at random:

So why do OG cat yogi’s love a good long stretch so much?

According to science: because it feels really good.

Who, exactly is “science”?  Hagerman goes on:

Cats sleep between 12 and 16 hours a day, about twice as much as people do. When humans sleep, the brain paralyzes most of the body’s muscles to prevent people from acting out their dreams. The same thing happens to cats during catnaps, which prevents the cat from sleepwalking off the sofa or wherever it’s snoozing.

Once the cat wakes up, the stretching begins.

When a cat is sleeping or relaxed, its blood pressure drops (which is also true of people). Stretching can help to reverse that.

As you stretch, it activates all of your muscles and increases your blood pressure, which increases the amount of blood flowing to the muscles and also to the brain. This helps wake you up and make you more alert.

As the muscles start moving with each stretch, they also flush out the toxins and waste byproducts that build up during periods of inactivity. For instance, carbon dioxide and lactic acid can accumulate in a cat’s body, but stretching can increase blood and lymph circulation, which helps to remove the toxins.

What’s more, stretching readies the muscles for activity. If a mouse scurries by — or, let’s be honest, an annoying human if we’re talking about house cats — the cat will be prepared to pounce if she has already stretched her muscles.

On October 6, appropriately named reader Niki Kitsakis sent a photo of a cat at the Acropolis. His notes are indented.

I immediately had to think of you when I took the picture attached. I took it this morning standing next to the greek flag at the Acropolis in Athens at shortly after 8 in the morning (What to call it? Acropocat? Catcropolis?).
Athens has the owl 🦉 as a symbol since ancient times as you know, but all I see all the time are cats 🐈. I think they ate all the owls… 🙂 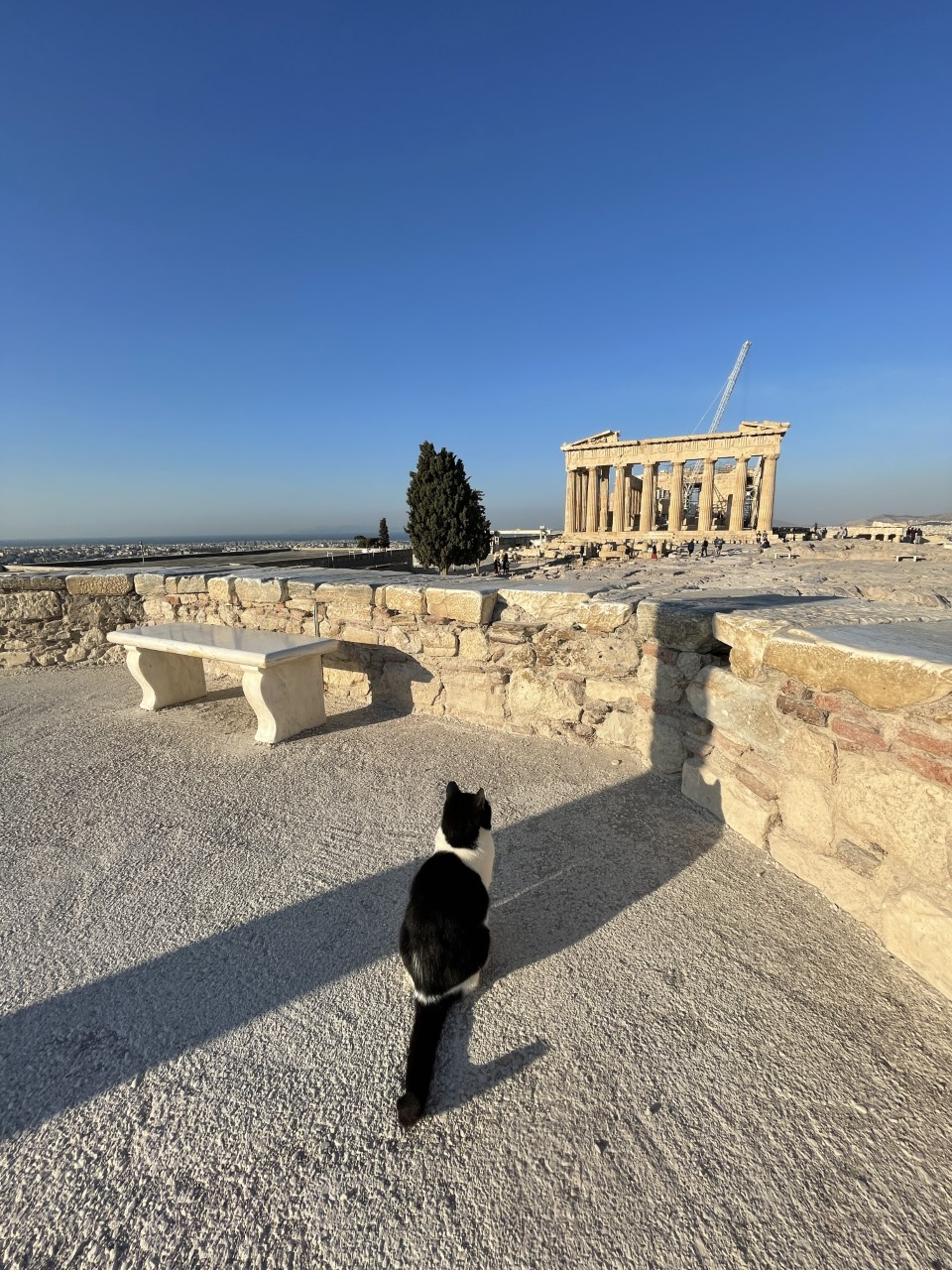 19 thoughts on “Caturday felid trifecta: Cat confused by card trick; how cats were domesticated (twice); why cats wiggle their butts before pouncing; and lagniappe”