Over at Western Washington University (WWU) in Bellingham, WA, 19th-century biologist Thomas Henry Huxley is poised for cancellation in December, for the administration has contemplated (and will surely enact) changing the name of its well known Huxley College of the Environment, listed as one of the Unversity’s “notable degree programs“. In an ill-conceived, erroneous, and poorly written critique of Huxley as a racist, a document on the website of the President of WWU made the case to rename the college. (A better case for renaming was that Huxley really didn’t have anything to do with WWU, but if the name’s there, presumably there was a reason—possibly to honor the man.)

The case for cancelling Huxley is weak, and vanishes when you take into account the good he did. Later in his life he was an abolitionist, reformer of education, and a lecturer on science to working people, as well as a crack scientist. You can read my pieces pieces on Huxley and WWU here, here, here and especially here, which links to Nick Matzke’s terrific defense of Huxley and critique of WWU’s shameful and ignorant cancellation.

Now I’ve learned, from Titania via reader Coel, that a place that was closer to Thomas Henry Huxley—Imperial College London—is also poised to cancel him, according to the Times and Torygraph (articles below tweet).

Thrilled to see that Thomas Henry Huxley has been cancelled.

As a white man, his campaign to abolish slavery was clearly a cynical ploy to disguise his inherent racism.

We must reinstate slavery immediately so that he doesn’t get away with it.https://t.co/ptuJelZqkN

The article below from the Torygraph (there’s also a paywalled one in the Times of London) describes the cancellation-to-be. Click on screenshot to read: 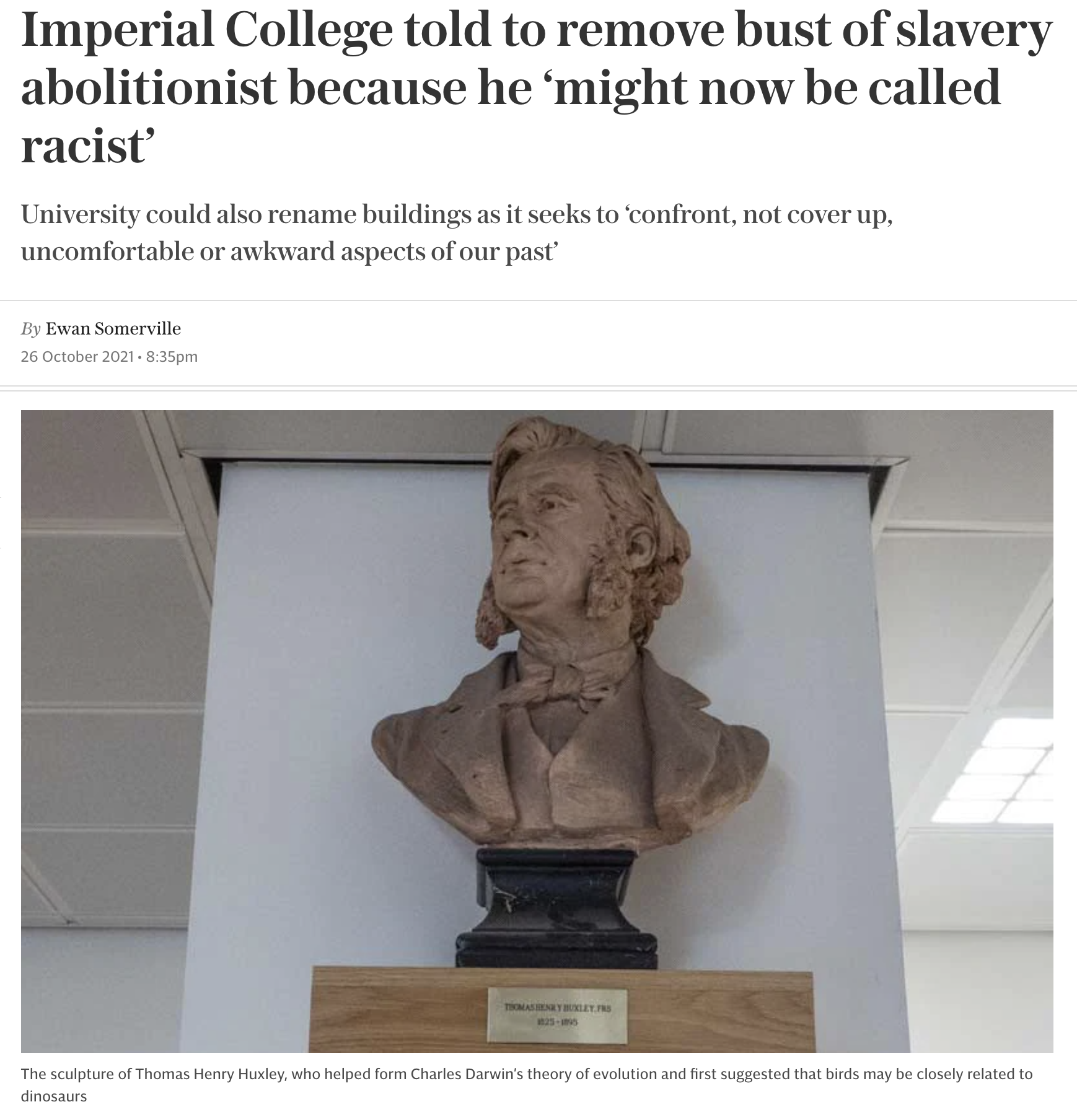 Huxley is part of a group of biologists who, according to an investigation by Imperial’s “independent history group”, should have buildings, rooms, statues, and academic positions named after them cancelled and renamed.  Not only T. H. Huxley has his head on the chopping block, but also W. D. Hamilton, Ronald Fisher, and J. B. S. Haldane, three of the finest evolutionary biologists of the last century. From the Torygraph:

Yes, anybody who falls short of Imperial’s modern values (do they accept all the tenets of Black Lives Matter?) must be removed forthwith and their memory effaced. And remember, British ideas on eugenics went nowhere: the UK never practiced eugenics.

There are others to be expunged:

Lecture theatres in the Hamilton Building at Silwood Park named after prominent geneticists such as William Donald Hamilton, Ronald Fisher and John Burdon Sanderson Haldane are also recommended for renaming because of links to eugenics.

The report said that if a building or room is renamed then the reason should be publicly explained via a plaque or a QR code, which can be scanned on a mobile phone.

It said the process of renaming buildings should be seen not as extraordinary but a periodic event that carefully considers “concerns associated with the namesake’s teachings, views, behaviour, etc”.

The group of academics also backed the idea of creating a new museum or “interpretation space” to house subjects and objects removed from other sites on campus with organised tours to discuss the related historical issues.

Alice Gast, Imperial’s president, said: “While we cannot change history, we can find ways to clarify what it means, learn lessons from it, and ensure that we are not perpetuating legacies that we find abhorrent.

“We stand for openness, transparency and freedom of speech – and that will define this dialogue.”

No, President Gast, you will define the dialogue, and are doing so by removing those who should be the subjects of that dialogue. As for standing for freedom of speech, well, that’s just a lie, though an obligatory lie.

37 thoughts on “T. H. Huxley about to be cancelled at Imperial College London”