Two books that you’ll probably want to read are just appearing, and readers sent me links to one review of each.  The books are John McWhorter’s Woke Racism (see below for subtitle), which came out yesterday and is already #78 on Amazon, and Rationality (subtitle below) by Steve Pinker, which comes out tomorrow and is #653 on Amazon (it will go higher).

The longish review of Woke Racism is at Quillette, so you can probably expect that it’s laudatory. I haven’t read it as I write this, but will before I continue this post. Click on the screenshot below to read it for free (but you can also subscribe to Quillette).

Pollen’s review, though it is laudatory, really summarizes the thesis of the book rather than evaluates it (there’s not a critical word in his piece though the NYT review I just found, also laudatory, detects some flaws). Pollen does give a good summary of what McWhorter says, though if you read McWhorter’s excerpts on his old Substack site, you’ll already know much of what he has to say. Regardless, I’ll read his book.

There are four parts of McWhorter’s argument as outlined by Pollen, and I’ll separate them. Quotes are indented:

a. McWhorter’s thesis. We are in the “third wave” of anti-racism, the first two being the “fight against slavery and legalized segregation. Number two was “the struggle against racist attitudes, which sought to instill the idea that racial prejudice was a moral defect.” This is presumably the era of Martin Luther King, Jr: from the Fifties to the late Sixties.  This third is the current brand of anti-racism, apparently construed by McWhorter as “woke racism,” although of course there are temperate and rational anti-racists. Those aren’t McWhorter’s targets.

b. The third wave is not only nuts, but harmful.

In his new book, Woke Racism: How a New Religion Has Betrayed Black America, John McWhorter demonstrates that there is far more Martin Luther than Martin Luther King in today’s anti-racist movement. McWhorter, a linguist and a professor at Columbia University, is a critic of luminous intelligence, and his book’s apparently oxymoronic title plays on Robin DiAngelo’s (equally oxymoronic) Nice Racism: How Progressive White People Perpetuate Racial Harm. DiAngelo’s dubious contention is that white progressives are often more injurious to the cause of racial equity than skinheads or bedsheet bigots, because their racist transgressions are the result of well-meaning ignorance. McWhorter asks the corollary: can even those supposedly enlightened and self-appointed champions of anti-racism (whom he calls “the Elect”) think and act in ways that harm black America?

McWhorter seems to concentrate on Ibram Kendi and Robin DiAngelo as avatars of “third wave antiracism”, though, according to the NYT review, he gives short shrift to their arguments themselves (he has analyzed those arguments elsewhere). It will behoove you to read Kendi’s How to be an Antiracist and DiAngelo’s White Fragility, though they may cause you “harm” by creating “offense”. You can’t really fathom the irrationality of the current movement without reading at least those two books.

c. The third wave is not just like a religion; it is a religion:

The central tenets of the third wave are provided by what McWhorter pointedly calls a “Catechism of Contradictions.” These include such prescriptions as: embrace multiculturalism, but don’t culturally appropriate; silence is violence, but remember to defer and elevate oppressed voices above your own; more black students should be admitted to top schools (via adjusted test scores and grade standards) in order to foster diversity, but it is racist to acknowledge that students are admitted for these reasons, and it is racist to expect them to represent a “diverse” view.

The catechism, in this case, is not a metaphor: McWhorter earns his subtitle, and he is not being rhetorical. He does not argue that third wave anti-racism is “like” a religion—it is a religion in all but name. It is religious in the infinite elasticity of its arguments and in its claim to be an all-solving theory, which banishes irony and contradiction and treats all opposition as blasphemy. We see also the prayer sessions and genuflections, the insistence on sin, the creation of saints (see the George Floyd murals), and the same extraordinary moral arrogance masquerading as humility and meekness. Church leaders, in sympathy with white protestors at a rally in Cary North Carolina, actually washed black protestors’ feet. This is not a distortion of religious thinking, as critics like Andrew Sullivan (a Catholic) have claimed. It is religious thinking to a T. It is Christianity in drag

. . These ostentatious outbursts of self-flagellation are quasi-Christian displays of self-incriminating and self-mortifying masochism. Perversely, people want to feel bad about themselves and to be told that they are sinners, so that they can throw themselves on the mercy of their clerics.

It’s useless to quibble about whether it really is a religion because it lacks a supernatural being; the point is that it is a largely irrational and delusion belief system that shares many characteristics with Abrahamic faiths.

d. The new anti-racism is pretentious and condescending to black people. Further, it will do little to bring about equality as it is mostly performative.

It is hard to see how any of this will redress real “structural” inequalities. “People supposedly committed to political transformation,” McWhorter writes, “breezily ignore the yawningly abstract relationship between testifying to ‘privilege’ and forging change in the real world.” How, for example, will DiAngelo’s micro-behavioral prescriptions make poor black communities less poor? How will dropping to one’s knees and admitting one’s privilege end the mass incarceration of black Americans caused by the disastrous failure of the War on Drugs? How will separate graduation ceremonies and separate national anthems raise standards in public schools, boost literacy, or make vocational training more accessible? None of these concrete problems receive a fraction of the attention given to the regulation of conduct and demands for intellectual rewiring.

As I’ve said before, Grania used to dwell on this issue when confronting woke words or actions. “What will it change?” she asked, and she lived in South Africa during the apartheid era. When people demonstrate against Americans trying on kimonos at the Boston Museum of Fine Arts, how does that reduce racism against Asians? When people cancel bird names and change the name of Audubon societies because of accused racism, does it help the situation of black Americans? Well, I suppose you can make the case, but those acts are clearly exculpatory and performative. Surely there are meaningful acts that can do a better job, and those are the actions that McWhorter and Lowry have been prescribing. We’ll see if they’re discussed in McWhorter’s book.

You can’t read the full review of Rationality since nearly all of it is paywalled on Arc Digital, but I got four whole paragraphs in an email from the site. (If readers have access, please send me a copy of the full review; I don’t think McWhorter would mind as it’s for publicity purposes.) If you are a subscriber, click on the screenshot below. 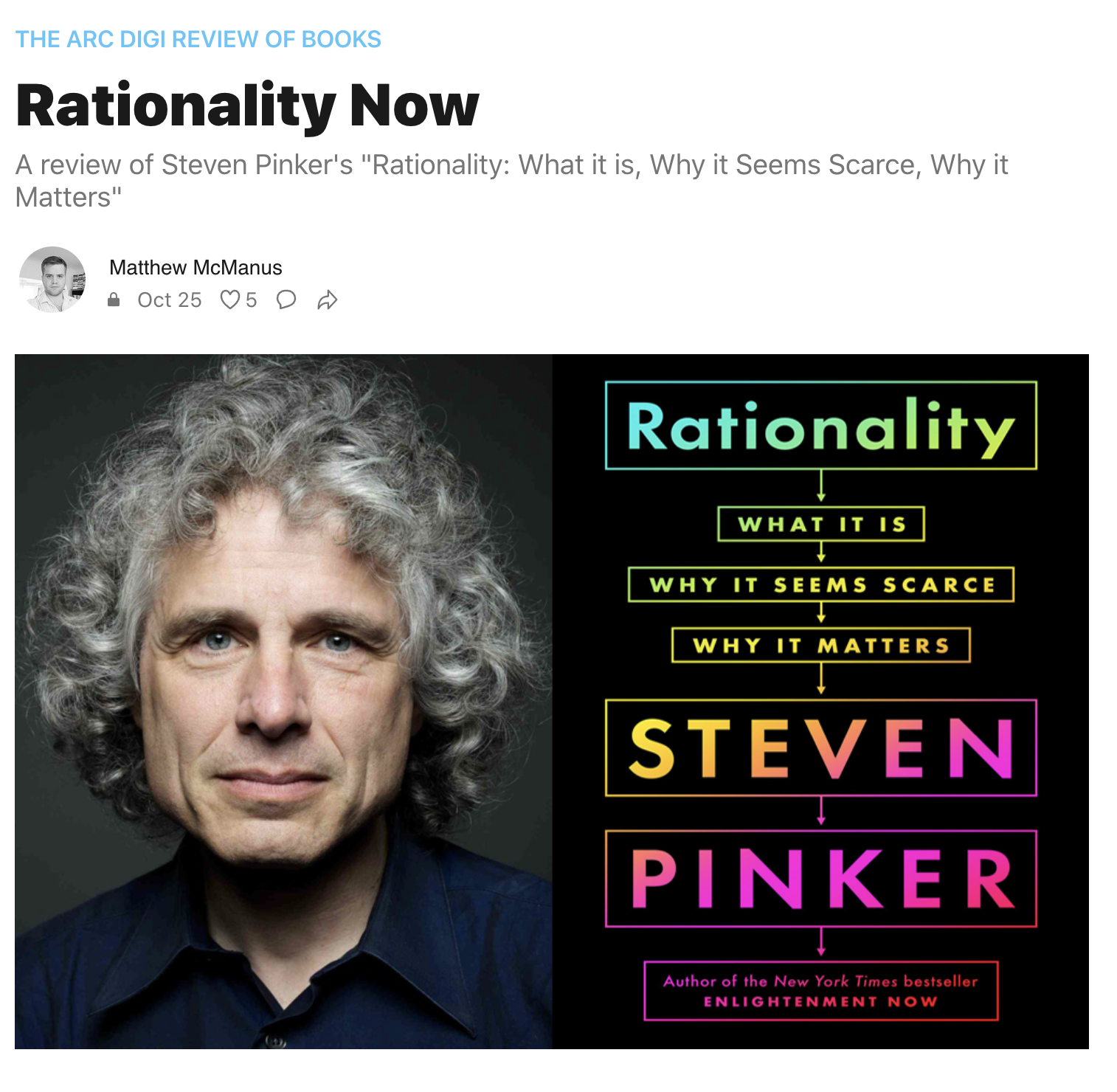 Here’s the excerpt I got:

I wasn’t the biggest fan of Steven Pinker’s earlier blockbuster Enlightenment Now. While it was crisply written and argued, it seemed incurious and even blasé about the many sources of dissatisfaction which had led to the re-emergence of radicalism in many developed states. Pinker also had a bad habit of gish-galloping past strawmanned iterations of doctrines he disdained as irrational, from postmodern leftism to Nietzschean reaction, offering zingers rather than analysis. While his optimism resonated with me, as someone who has grown weary of the cliché of left-wing melancholia, Pinker’s “stay the course” diagnosis also struck me as inadequate to the challenges humanity faces in the 21st century.

Now that is bad writing, loaded with jargon and ponderous. But press on, for the review is positive:

So I was surprised by how much I enjoyed his latest book, Rationality: What it is, Why it Seems Scarce, Why it Matters. A far less ambitious book than Enlightenment Now, it may disappoint those looking for another “state of the world” liberal manifesto. That said, it plays heavily to his strengths as a renowned cognitive psychologist.

Many of its summaries of logical reasoning, critical thinking, and fallacious argumentation are top notch introductions which anyone could benefit from. Pinker still occasionally reaches too far when trying to engage in moral and political philosophies where his grip remains superficial, and as cultural analysis no one will get much from Rationality. But these are relatively minor complaints about what is a useful and always readable book.

We live in an era that simultaneously worships intellect and resents it. Even in the most relentlessly rad left circles I’m most familiar with, where discrimination of all kinds is avoided with incomparable zeal, the one form of social ranking that remains not only permissible but accepted is intellectual: who is the smartest, knows the most, has published the most books, etc. Much of this is the long term product of our Enlightenment heritage’s focus on reason as the Archimedean lever which can move the world for the better.