There are two items today that I commend to your attention.

The first is Andrew Sullivan’s latest newsletter on The Weekly Dish (click on screenshot below), in particular his main piece on a new phenomenon: people confronting politicians or those whom thy oppose in private venues, and harassing them or vandalizing their property. You might remember that this started in the days running up to the Trump election, when people would accost Republican politicians in restaurants, scream at them, or, sometimes, the restaurant owner would ask them to leave.  Although some readers thought this was fine, I didn’t. People should be able to dine in restaurants in public with their families and be left in peace, whether they be Trumpites or Bernie bros. (Most of the hectoring was done by the Left, but as Sullivan notes in this week’s column, the Right is not immune.)

Both sides need to lay off disturbing people’s regular lives, for it has no salubrious result; it allows some people to blow of steam while hardening the divisions in America. And it inspires other people to go off on their enemies in public. 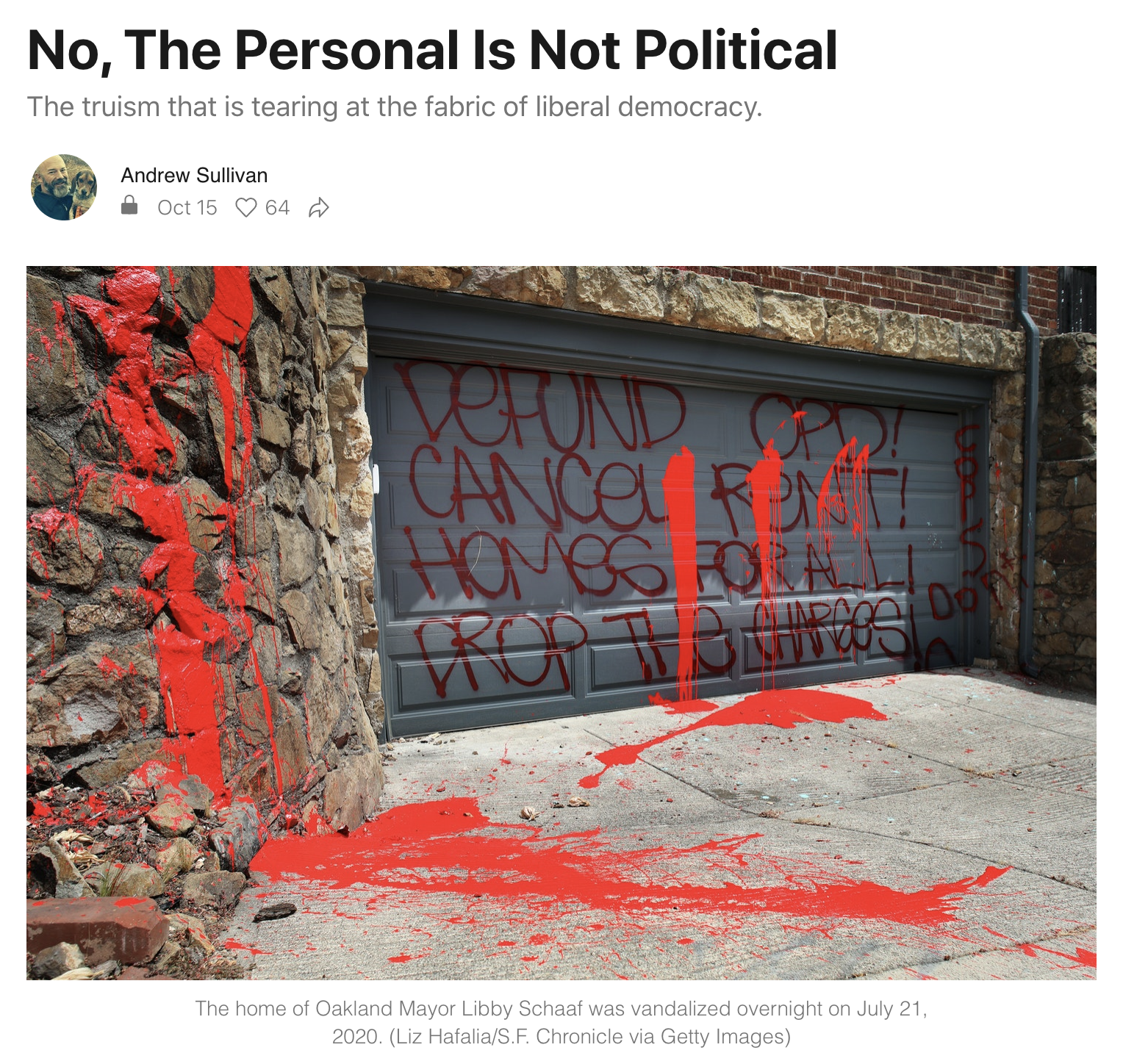 The title itself shows one example of Leftist damage to the home of Oakland’s mayor. As you see, it says “defund the OPD [Oakland Police Department]”, “cancel rent!” (that would work well) and so on. That mess of paint requires serious cleaning up!  Sullivan cites a bunch of examples of similar attacks by the Left, but you can read for yourself. I’ll adduce one more: the mayor of Portland, Oregon had to move because protestors went after his condo, even breaking windows of other people’s offices and throwing burning material in them. Yelling at people is insufficient these days! No, you have to follow them into the bathroom and yell at them in their stalls when they’re trying to micturate, as happened to Kyrsten Sinema.

And attacks by the Right as well:

Although not as persistent or as widespread as the far left’s invasion of the privacy of public figures, the far right is not innocent either. LA Mayor Garcetti’s residence was targeted by anti-lockdown activists; LA County’s public health director was also targeted at home; some folks brought menacing tiki-torches to the Boise mayor’s home; in Duluth, Trump supporters organized 20 trucks to circle the mayor’s home. Over the new year, Nancy Pelosi’s private home was vandalized, graffiti written on her garage door, and a bloody pig’s head was thrown into the mix for good measure.

There are also attacks on school board members around the country, who favor teaching the concepts of critical race theory to kids, or are implementing Covid mask policies. It’s fine and good to protest; it is not fine and good to force these people and their families to live under personal siege.

Anti-mask demonstrators, for example, hounded one Brevard School Board member and mother, Jennifer Jenkins, at her Florida home, at one point coming to her doorstep and coughing in her face. She later testified that she was ok with demonstrators outside her home, but that “I object to them following my car around, I reject them saying they are coming for me and I need to beg for mercy … that they are going behind my home and brandishing their weapons to my neighbors. That they’re making false DCF [child welfare agency] claims against me to my daughter. That I have to take a DCF investigator to her playdate to go underneath her clothing and check for burn marks. That’s what I’m against.”

All of this is to make the point that the personal is not political, a phrase that never made a lot of sense to me. Sullivan, like me, is opposed to this kind of stuff, and is and was also opposed to outing closeted gays. As he says, “I have long felt that way even about ‘outing’ public figures who have bad records on gay rights. Legitimize outing gays to combat homophobia and you legitimize other people outing gays in order to shame and humiliate.”

What we’re losing, I fear, is the idea that we can take on a role as public citizens that is separate from our role as private human beings; that we can place limits on what the state can do to us, and what we can do to each other. As Hannah Arendt perhaps best grasped, a liberal society is almost defined by its belief that politics has limits, and that it exists to defend us from either the government or our fellow citizens leveraging private human flaws for political purposes. There are, in fact, many worse things than hypocrisy. Shamelessness, for example. The first is human; the second is sociopathic. I want to live in a world where the former prevails.

The idea that “the personal is political” is not just a glib phrase. It is actually best exemplified by totalitarian systems, which seek no limits to their authority over private matters, even those matters that are buried deep in your mind and soul, and which enroll citizens into becoming mutual spies in pursuit of heretics. I don’t want to live in that transparent, unsparing, brutalizing world. It turns us all into spies; it gives no one space to think or escape; it is devoid of mercy and gives no benefit of the doubt.

Let’s not lose the distinction between public and private. Let’s remember that everything we decide to do to violate the privacy of others comes back to legitimize others’ violation of ours. The immediate payoff may be gratifying; but what it does to a society over time, as the tit-for-tats cascade, is to remove the chance for civil debate, and enhance the power of personal hatred, and, ultimately political violence. That’s where this leads: a descent from civil argument to civil war.

That last sentence might be hyperbole, but it’s not out of the question.

Can we have a little civility around here? America is so polarized that even at the University of Chicago, when our administration refused to get rid of its police department, students camped out in the street in front of our Provost’s house for a week (an illegal act, but the police let them be for a while), and even painted a parking space for the Provost, who’s of Chinese descent.  She’s not by any means a racist, but that’s the worst thing that the Woke can call someone, and so they painted it in front of her house, helpfully in Chinese and English (I don’t even know if she reads or speaks Chinese). “CareNotCops” is the local student “progressive” group.

This is not okay:

Someone emerged from Provost Lee’s house, refused to talk to us, and got into a car parked outside her house and drove away. We decided we wanted to be a nice neighbor and leave a little present for when they return ☺️ #DefundUCPD #EthnicStudiesNow #CulturalCentersNow pic.twitter.com/PIk6PPeqTs

Second item (h/t Paul): a 28-minute interview of Bari Weiss by Brian Stelter, CNN’s lead reporter on the media.  The topic is why she, like Andrew Sullivan, Matt Taibbi, and others, have moved from “MSM” to Substack. Click on the screenshot below to go to the page with the audio interview, and then on the arrow by the header below.

As Stelter notes, Weiss now makes a lot more money on Substack than she did before she resigned from the New York Times, but I’m sure she did it for the freedom to write without censorship, not for money (she couldn’t predict that she’d get over 100,000 subscribers). She indicts the NYT for pushing a defined narrative rather than “all the news that’s fit to print.”  She wants her column, Common Sense, to be “the op-ed column I would like to read”, the place that cover stories that the MSM won’t touch.  She gives a laundry list of “the ways that the world’s gone mad”; you’ll be familiar with many of them, including MIT’s cancellation of University of Chicago professor Dorian Abbot’s invited lecture, which was completely ignored by the major media save the Wall Street Journal. (She also indicts CNN itself.)

In the end, her aim is to publish things that will affect our “fear-based society” in a good way, so that people don’t become afraid, as many are, to say what they think. Stelter pushes back at some points, and it’s a very good interview.

Leave a Reply to Pliny the in Between Cancel reply