A week ago I wrote a piece on the firing of the Art Institute of Chicago’s (AIC’s) 122 volunteer (unpaid) docents, who were let go because they were not sufficiently “diverse”. The Art Institute now plans to hire fewer docents who will be paid $25 per hour, with much less training, to guide people around the museum. They will surely be ethnically more diverse than the jettisoned docents, who were largely older white women—some of them donors to the AIC. 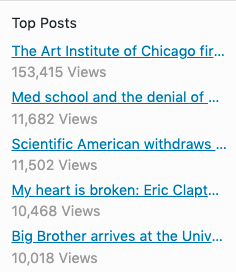 I couldn’t figure out why, but one explanation is that the media, including the local media, didn’t cover it, probably because the AIC’s actions, though reprehensible, are not unusual in today’s “racial reckoning”, but didn’t have very good “optics”. The Chicago Tribune didn’t even report it as news until the paper published an editorial damning the AIC for what it did, “Shame on the Art Institute for summarily canning its volunteer docents.” And then the Trib published a lame response from Robert Levy, chairman of the AIC board, followed by a few letters to the editor criticizing the AIC. and a short and inconclusive discussion on WBEZ, the local public radio station, featuring a representative of the AIC and the docents.

That’s pretty much all the reporting from “MSM”. The most comprehensive coverage was in fact an article by Dennis Byrne on his website at ChicagoNow.com, The Barbershop, which reproduced the letter firing the docents and the group’s response to being ditched.  That site is not read by as many people as is the MSM, so I suppose people glommed on to my summary as a news article. Conservative news did pick it up, but you still won’t find boo about it in papers like the NYT or Washington Post. That’s a shame, because the AIC’s action should kindle a debate about the ethics and tactics of how the AIC acted, and about how to achieve “racial reckoning”. (As many readers observed, there are ways to diversity the docents without firing any of them.)

Now the Wall Street Journal, whose readers surely include many potential donors to the AIC, has written an op-ed outlining the story. Though the WSJ is conservative in its op-eds, and criticizing the AIC has been something largely limited to right-wing papers, this editorial gets the facts right and isn’t aren’t nearly as hard on the AIC as was the Chicago Tribune. You can try to read it by clicking below (judicious inquiry might yield you a copy should you fail), but you won’t learn much more than what Byrne and I put in our posts.

However, here are two items from that op-ed that were new to me:

“It was nearly a full-time job,” said Dietrich Klevorn, a docent since 2012. (Ms. Klevorn was the only docent who agreed to speak to the Journal, rejecting the institute’s request that they not talk to the media.) “We had to spend a lot of time physically in the museum studying works of art, researching, putting tours together,” she continued. “We had to be very comprehensive about everything as we talked with them, moving through the space.”

As I said, the WSJ isn’t nearly as intemperate about the AIC as was the local paper, but it does have a no-nonsense conclusion that also raises the possibility of a phased-in increase in diversity:

Still, the Art Institute hasn’t explained why they had to be jettisoned en masse and not diversified over time. The museum appears to be in the grips of a self-defeating overcorrection. It has adopted the language of diversity, inclusion and equity so completely that it was willing to fire the same upper-middle class volunteers it relies on for charitable donations.

Changes to the program may mean that the museum connects to younger and more diverse visitors, Ms. Klevorn said, but it will come at a cost. The Art Institute “will offer far less opportunity for people to have human docents taking them through the museum.”

In their public statements, both Ms. Stein and Mr. Levy referenced their understanding of the museum’s civic role. Mr. Levy even condemned critics as “egregiously anti-civic,” as though objecting to diversity quotas meant rejecting the nation’s civic institutions. What they don’t seem to understand is that those civic institutions have always relied on the volunteer work of women with enough public spirit to donate their time and enough money to afford to do so. These wealthy women form the mortar of the nation’s civic institutions, and we’ll miss them when they’re gone.

In the name of what they call civic-minded diversity, the museum has thrown overboard a group of people who actually see it as their duty to help the public understand art. That’s not very civic-minded, is it?

That’s not rabidly right-wing, either, is it?  But the piece, appearing in a widely-read venue, isn’t going to do the AIC any good.

But I want to say a few things. Though for several days my site got six to eight times the normal traffic, all because of that AIC piece, and though there were 157 comments, there would have been a lot more comments had I let all the nasty or racist ones through. Yes, there were white supremacist comments, and a lot of people being strident about “reverse racism”.

I let some of those appear, depending on their civility, but I don’t see diversifying the AIC docents as “reverse racism.” Yes, you can characterize it that way, because you’re discriminating in favor of people of color and against whites, but I see it more as a form of reparations rather than demonization.  If you’re in favor of any kind of affirmative action, you can be accused of reverse racism. I’m willing to bear the epithet because I favor some forms of affirmative action. But I hasten to add that the AIC’s mass firing of docents, rather than a program that increases diversity as docents retire, is cruel and hamhanded. However, their desire to diversify the staff is not. (That diversity, by the way, should include class as well as race, as there are few “regular people” docents. And that means paying all the docents, unless some are willing to work for free while others get a paycheck.)

I’m for a reasoned dialogue on race and equity, but some of the comments I got sound just like things that would come out of the mouths of Proud Boys. My conclusion is that there is a lot of pent-up anger about DEI initiatives. Some of it is justified by actions like the AIC’s firing, but there’s definitely an element of racism in some of the comments you didn’t see. And that makes me sad.

You want an example? Here’s one from someone named “Steve”, who’s apostrophe-deprived:

This is what your future will be if you dont start standing up for yourselves and quit being such stupid pushovers.

Don’t let these SCUM guilt you….
Be PROUD to be White….I AM.
Our ancestors/people accomplished 1000x more than any other race. They hate us out of sheer jealousy. And make NO MISTAKE….They DO hate us….HATE US !!!!

Start speaking up!!!!
There is NO SUCH THING as “White Privilege” Its called HARD WORK.

All the Lefts HATRED and Marxist “key Words” are just meant to divide us.

Just remember…. The Left Project and Deflect…
They call everyone else Fascist or Racist… Because that is what THEY ARE….

And one more just came in while I was writing this; from one “swimologist”:

The ONLY effort that should be made is hiring competent people, race be damned. Many companies used to have aptitude tests for hiring, but reliably low-I.Q. blacks failed them, and lawsuits were filed claiming “disparate impact,” so NOW we these same companies require degrees for jobs that don’t NEED them. Just another way the black undertow plague drags America down.

Writing this website has a downside you don’t see: all the racists, loons, and rude people that infest America and feel they have to have their say here.

30 thoughts on “The Wall Street Journal on the firing of the Art Institute’s docents; and a personal observation”