I have eaten very well on my vacation, having gone to several semi-upscale ethnic restaurants and also eaten well in the homes of two people who were kind enough to put me up. But I often forgot to use my camera when I was absorbed in the food, so I’ll present a melange of photos of different foods, restaurants, and the like.

First, though, a scene from Harvard Square, which has changed immensely since I arrived in Boston in 1972.  It’s gentrified now. My erstwhile favorite place to eat as a grad student, Elsie’s Deli (home of the huge “Fresser’s Dream” sandwich), has long disappeared. As has Steve Harrell’s ice cream shop, which made the best hot fudge sundaes in Massachusetts. The Coop is still there, and Cardullo’s is hanging on, but the magazine store in the center of the Square is defunct.

This is one thing that remains. If you listen to NPR, you’ll recognize the name of the fictional accounting firm on the third-floor window: “Dewey, Cheetham & Howe.” 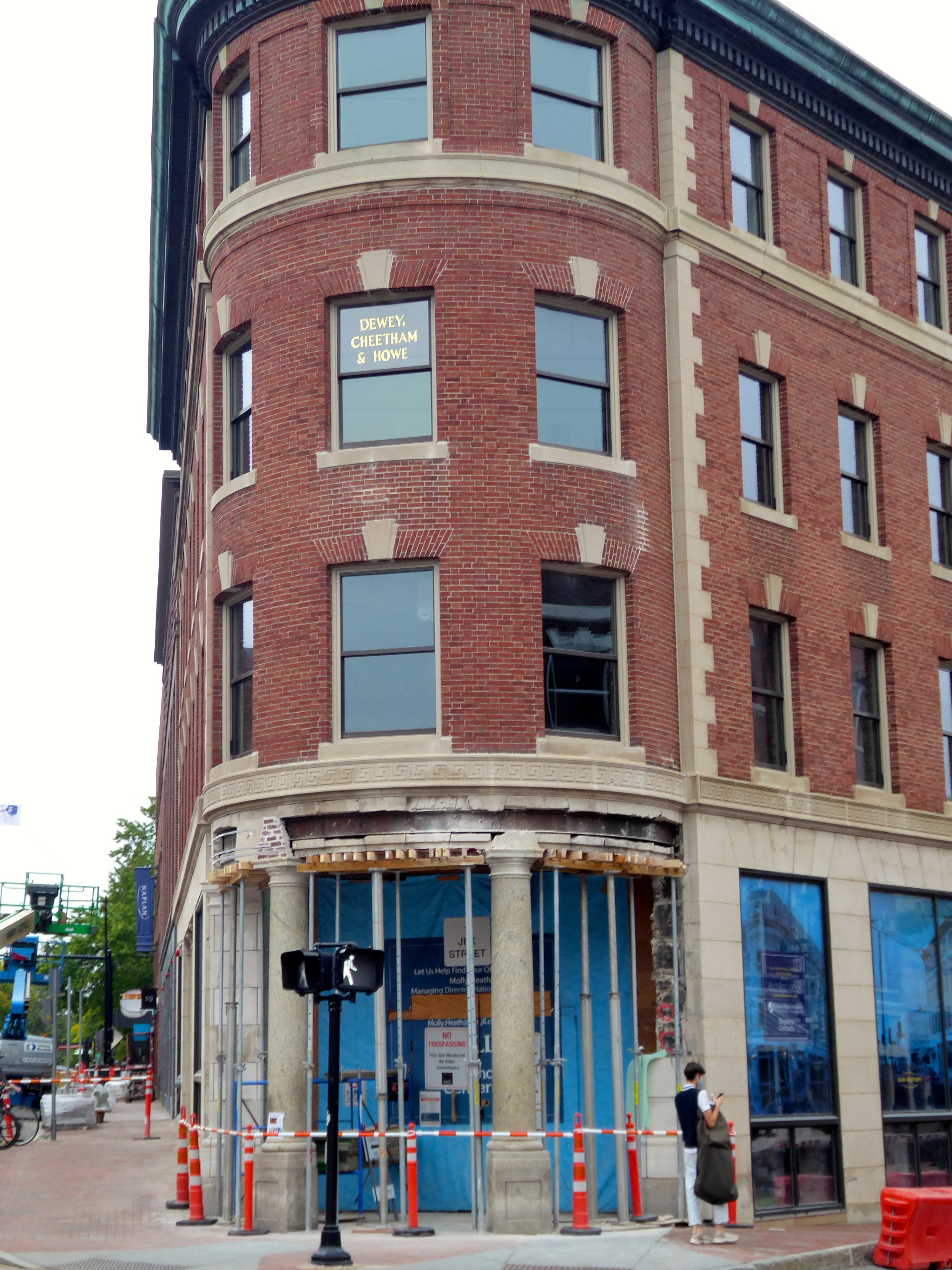 Yes, it’s from Car Talk. Wikipedia has an entry for this fictional firm, which was also used as a joke by others.

The name of the DC&H corporate offices (otherwise known as the headquarters of the radio show Car Talk) is visible on the third floor window above the corner of Brattle and JFK Streets, in Harvard Square, Cambridge, Massachusetts.

Tom and Ray Magliozzi, of NPR’s Car Talk radio program, named their business corporation “Dewey, Cheetham & Howe”. Their corporate offices were located on a third-floor office at the corner of Brattle and JFK Streets in Harvard Square in Cambridge, Massachusetts. The Magliozzi brothers declared that they established DC&H in 1989. 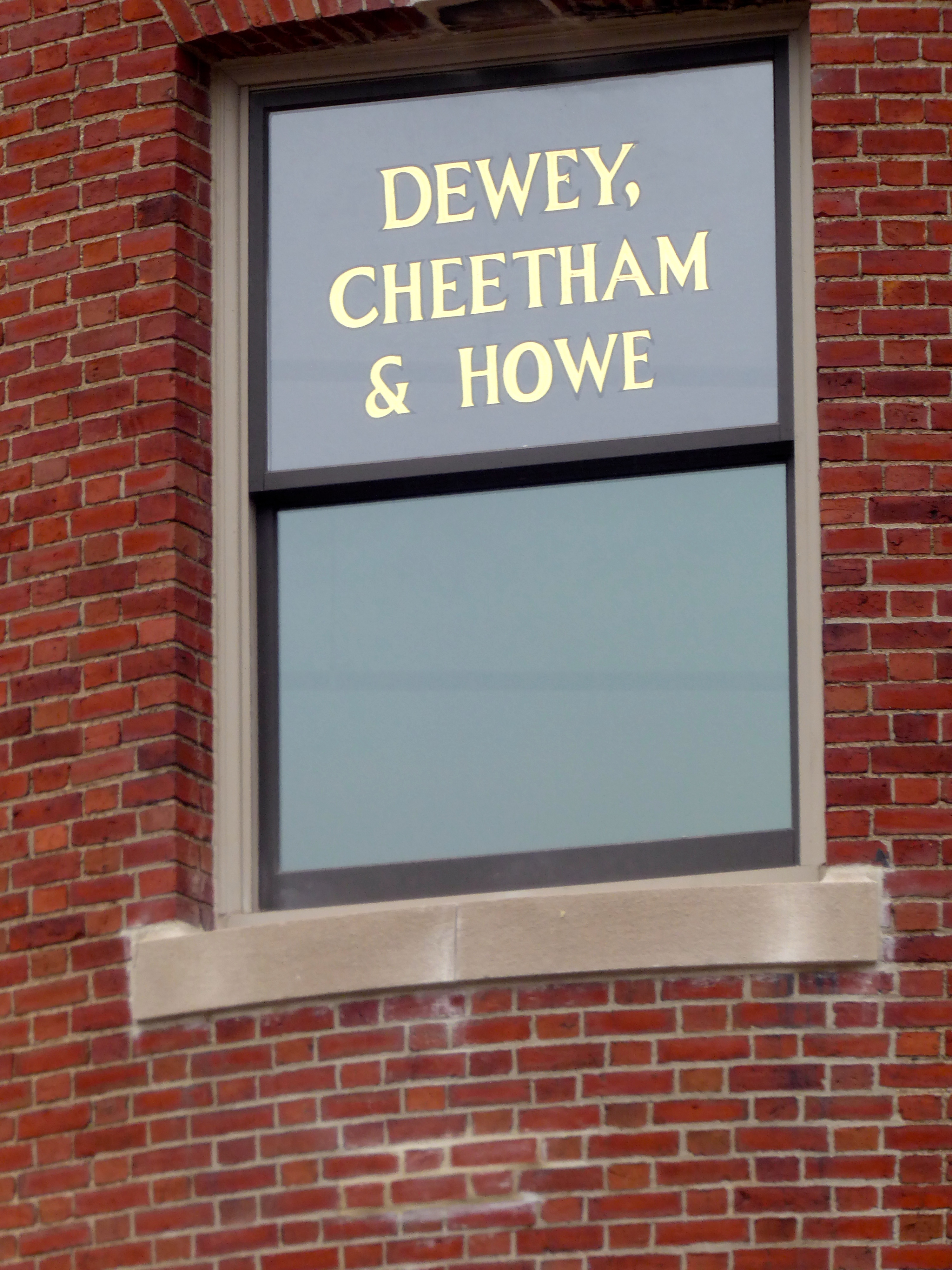 We went out several times, first to this excellent Spanish restaurant in Brookline, specializing in tapas. But I forgot to take pictures of the food! We had a fine Rioja with the meal, and were full after dinner. (The first question you have to ask when evaluating a restaurant is, “Did I get enough to eat?” If the answer is “no,” then you need go no further.) 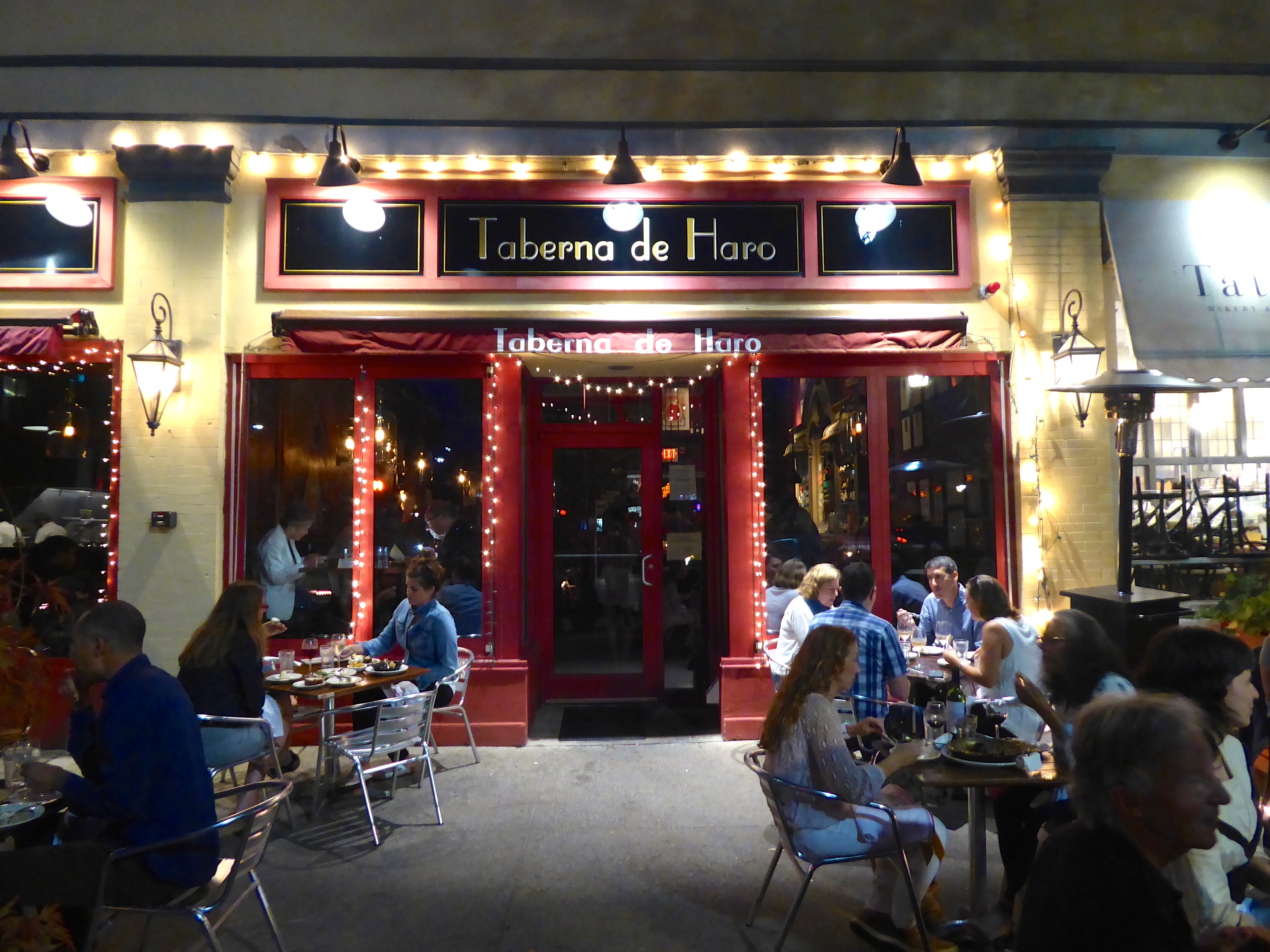 The flavor board at my favorite ice-cream shop in the world, Christina’s Homemade Ice Cream in Cambridge.  If you go to Cambridge and don’t go here, you are a reprobate. There are usually many more flavors, but I expect the pandemic reduced the choice somewhat. Still, there are more flavors than you could try on several visits. I had the very best flavor, “burnt sugar” (the world’s best ice cream flavor) with a scoop of ginger-molasses, itself a wonderful combination. It was a great postprandial treat. They make ice cream the real way, dense and with all natural flavors. I wanted green tea with a scoop of adzuki bean, too, but I couldn’t pass up the burnt sugar. 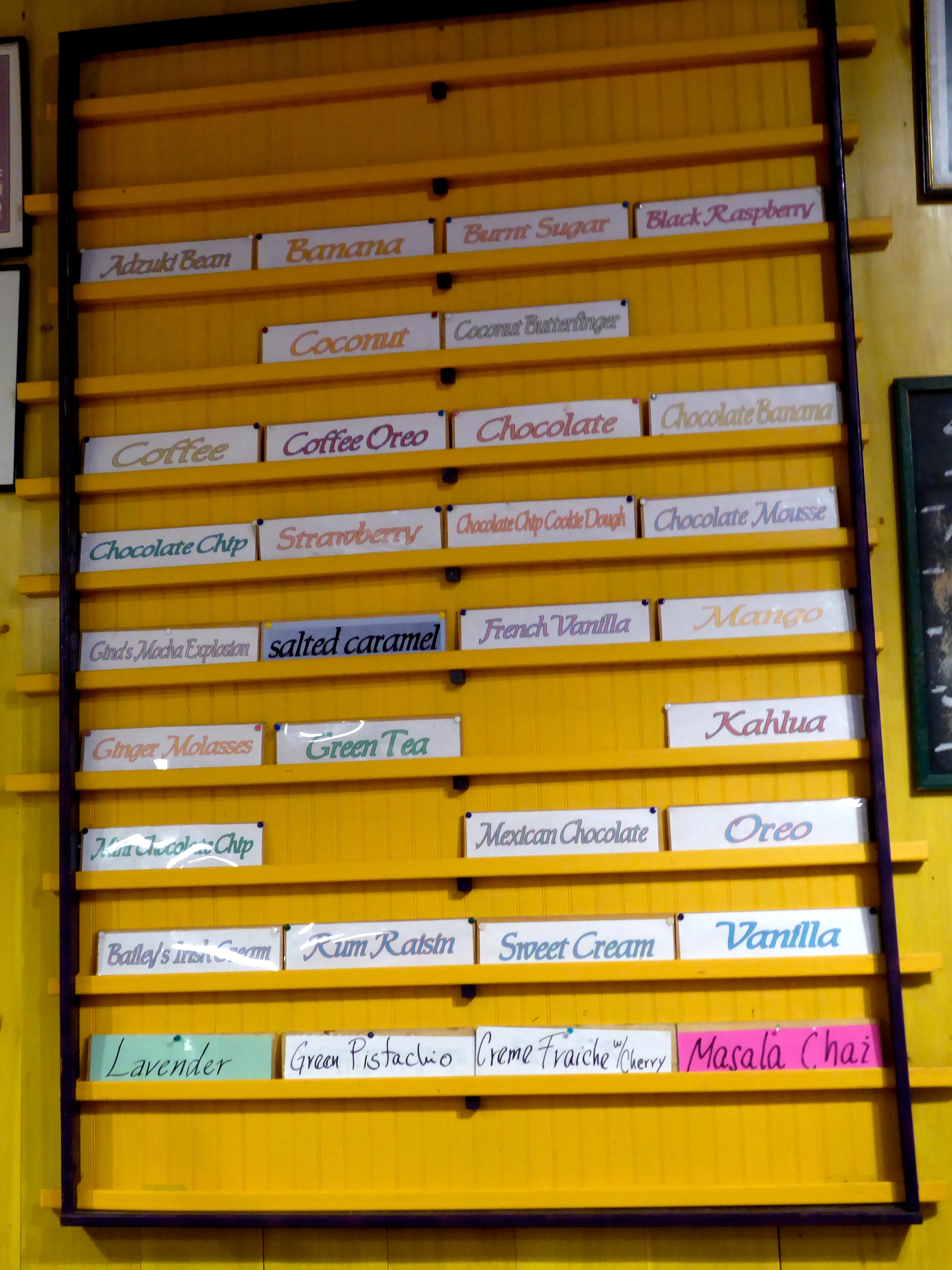 Every reader here knows that my favorite British beer is Timothy Taylor Landlord, which has won Championship Beer of Britain four times and is a wonderful, tasty session ale that is not overhopped. It’s hard enough to find on tap in the UK, but there’s a bottled version as well, and four bottles were available in the Boston area. Andrew, my host, tracked them down and then cycled 22 miles to get those four bottles so we could have some. What a kind chap!

And even though it was bottled, it tasted nearly as good as a freshly-drawn pint in England. (As it had been kept in the fridge, we warmed the pints, 500 ml., up to 11°C in the microwave.) 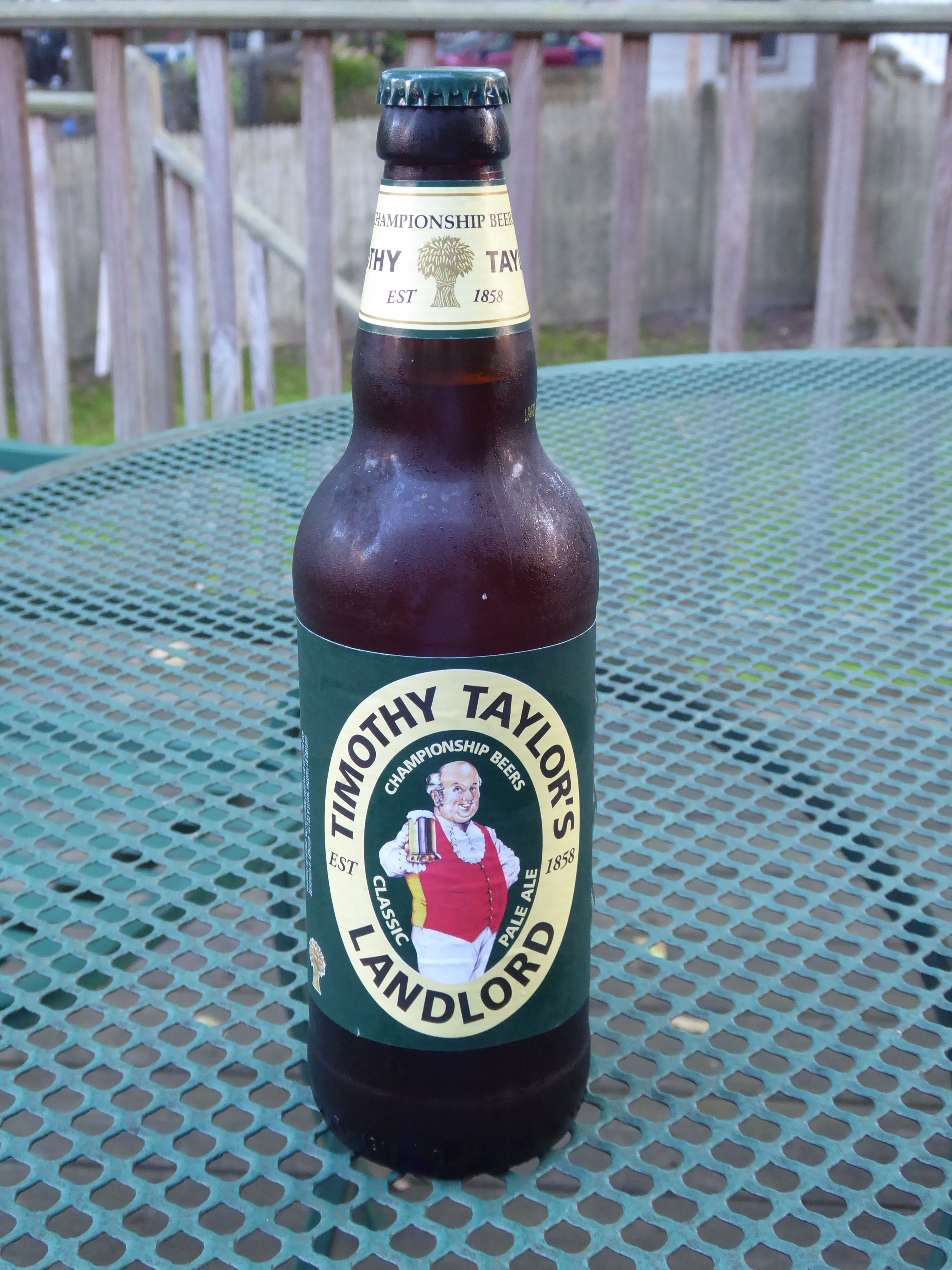 Yesterday I moved to my second set of hosts, old Harvard friends Andrew and Naomi. Naomi is a world-class cook, and never uses recipes. I begged her not to go to any trouble to cook for me, as she always does, but she ignored my instructions and produced a wonderful dinner, which included this shepherd’s pie (a treat with a pint of Landlord!): 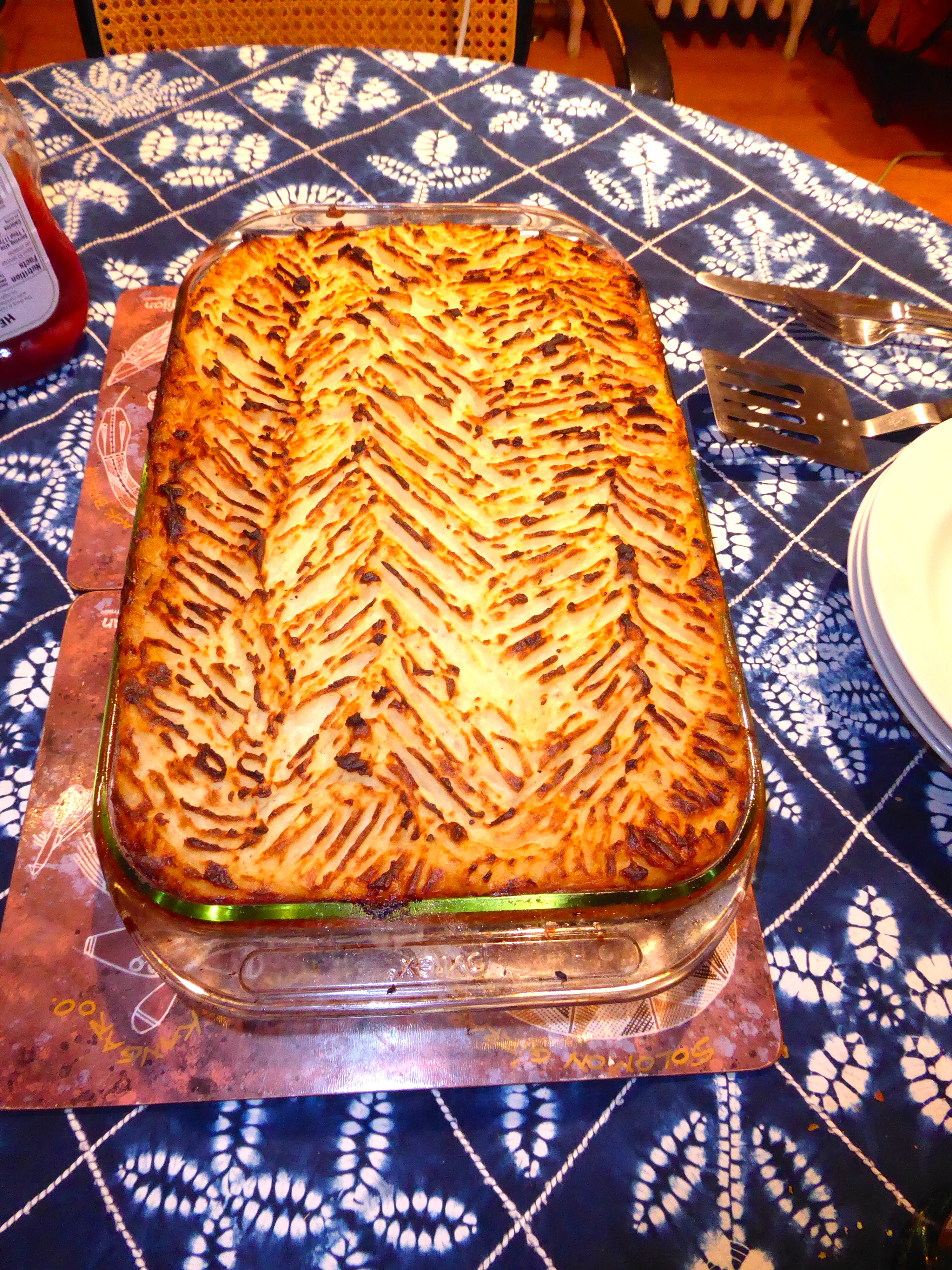 We also had a half avocado with lime for appetizer, green beans and baby asparagus on the side, and the apple-raspberry crumble below for dessert, served warm with vanilla ice cream. 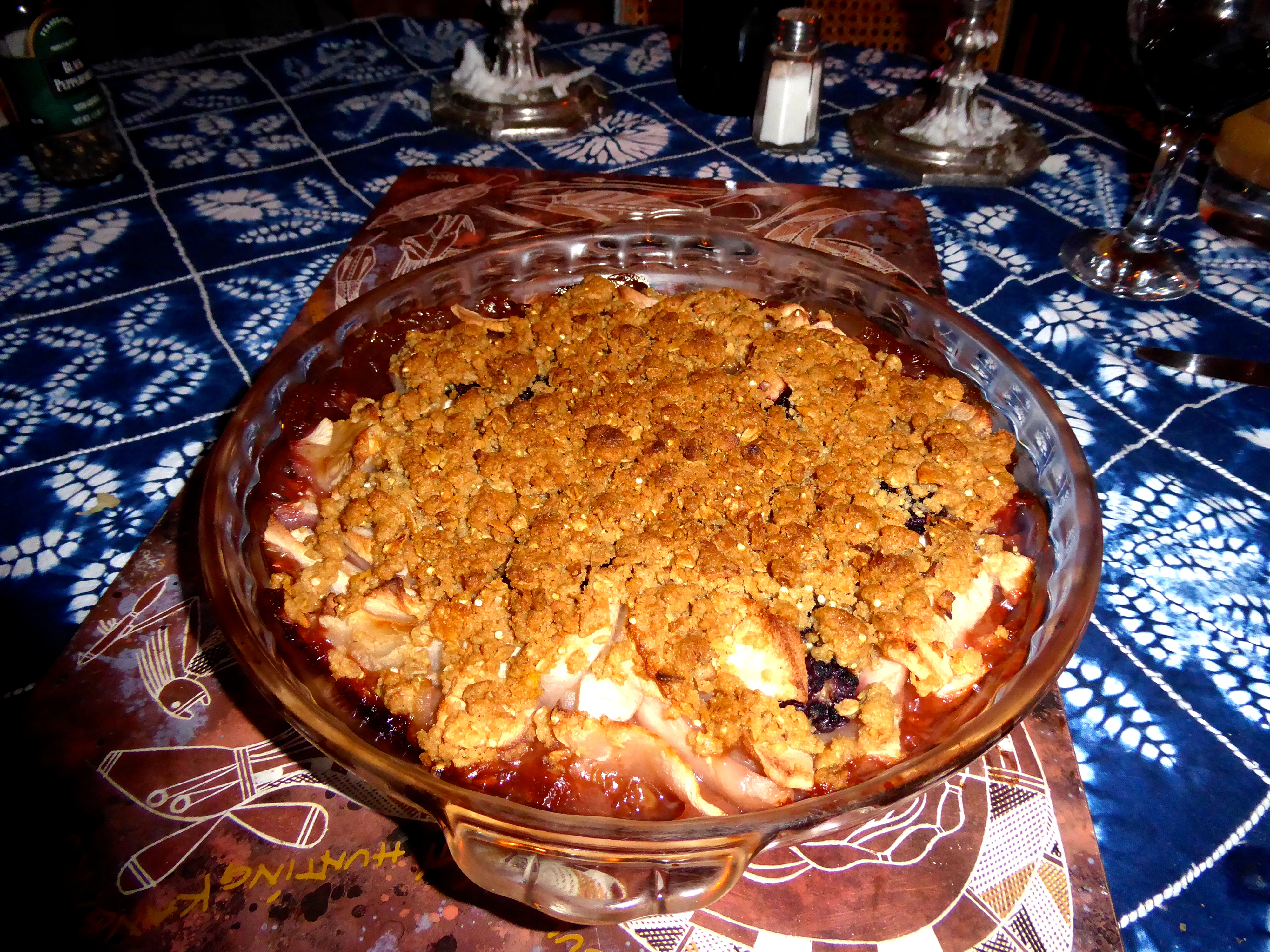 I am allowed only one breakfast at this house due to Andrew’s insistence: two cakes of Weetabix with bananas as well as a strong mug of superb coffee. But Andrew is absolutely insistent on how one eats Weetabix. (He buys them by the case, and sometimes eats them three times a day when his wife is out of town: two for breakfast, four for lunch, and six for dinner. He is a Weetabix fanatic.) 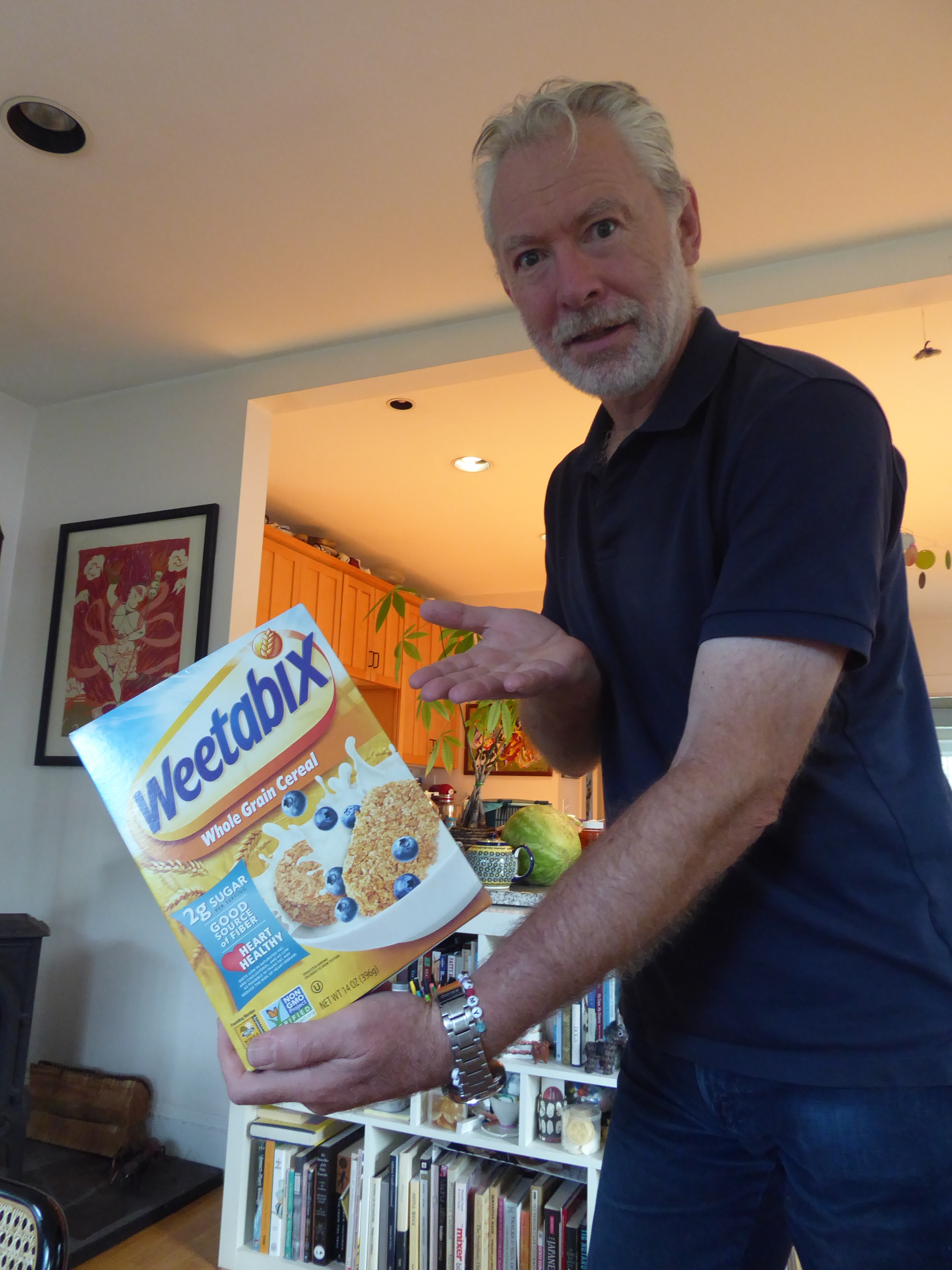 First, put two Weetabix biscuits, round side up (there are two different sides) in a wide, shallow bowl so that the milk doesn’t saturate the biscuit. The point is to retain most of the crunch of the biscuit while also getting the milk. You must always eat two Weetabix (I like three) as there are an even number of biscuits in the box and you don’t want to be left with just one. Four or six are permitted at other meals, but neer an odd number. 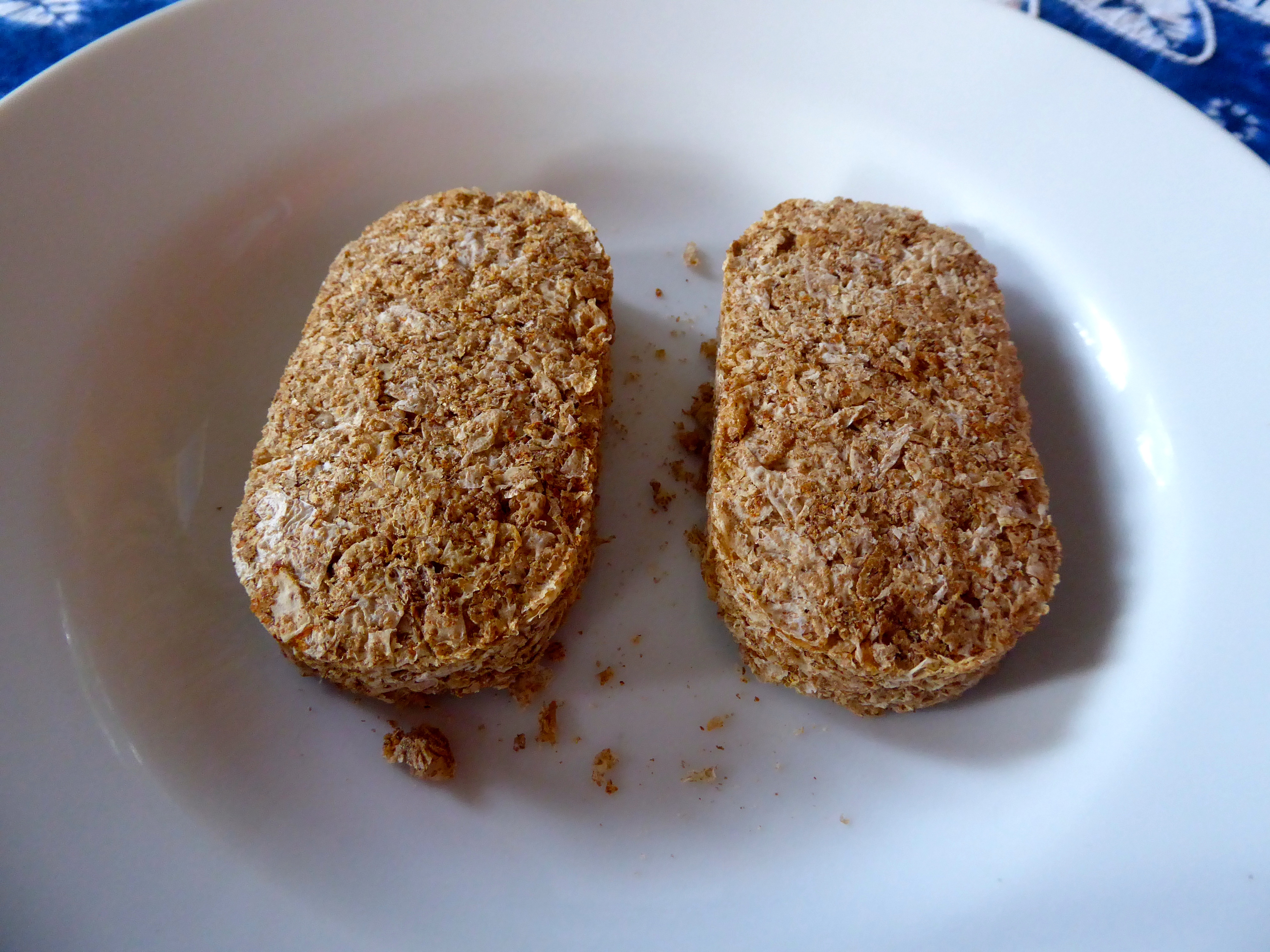 Half a banana is then sliced atop the biscuits with a sharp-edged spoon: 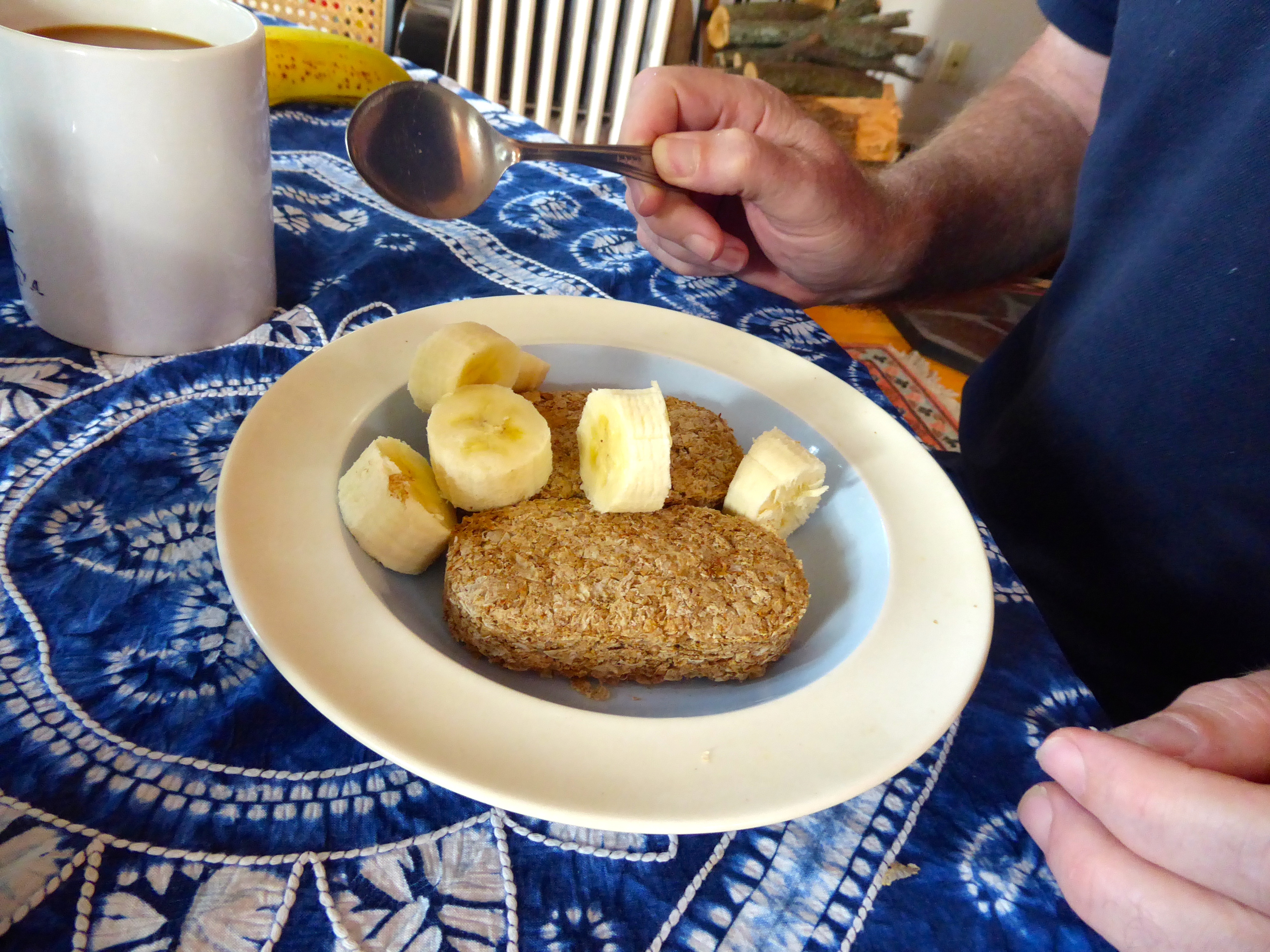 Then add milk, making sure to splash some atop the biscuits so they won’t be dry. The milk should be about a quarter-inch deep in the bowl. 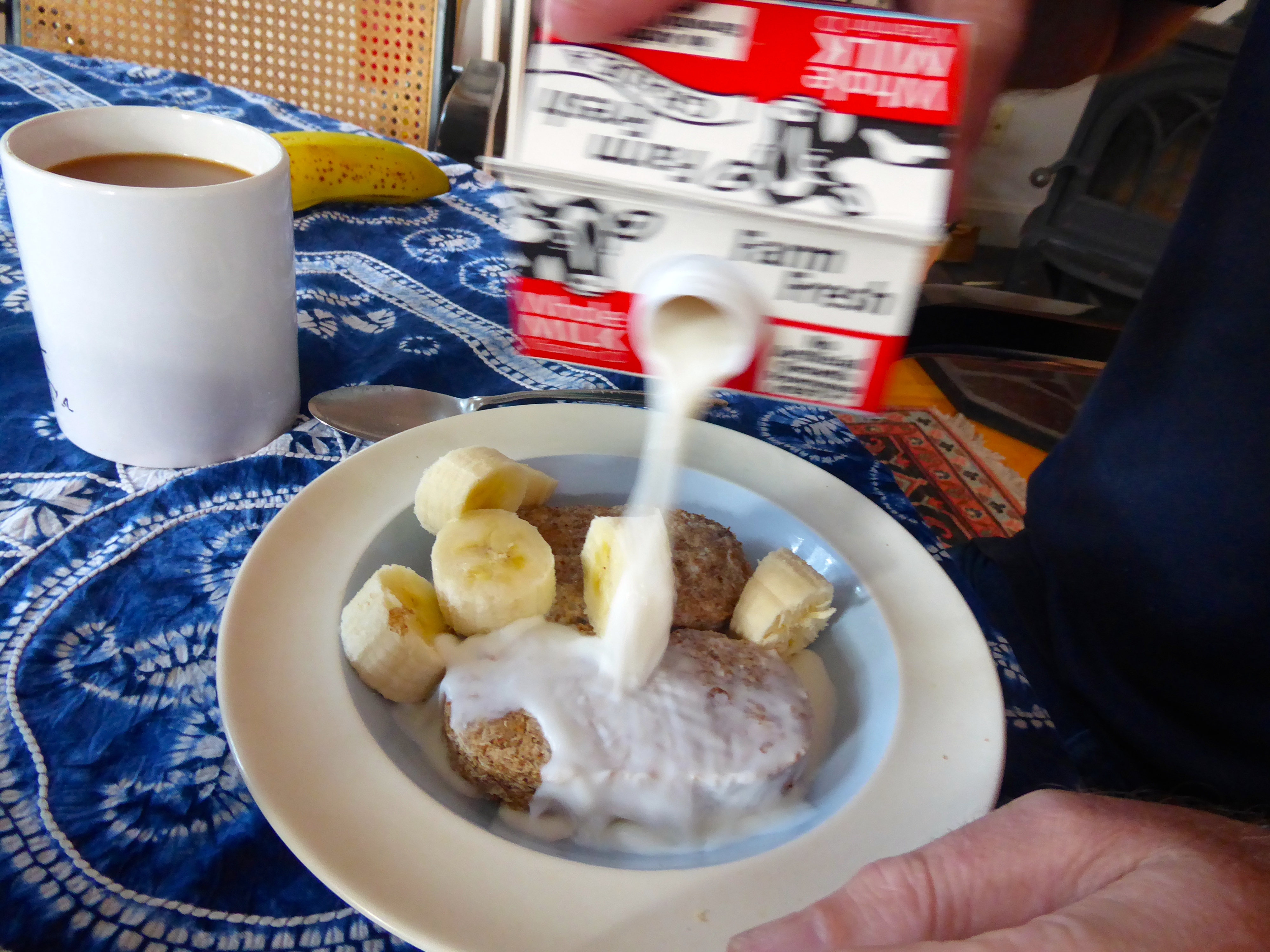 Only then do you add the sugar, as you don’t want it dissolved in the milk when it’s poured: 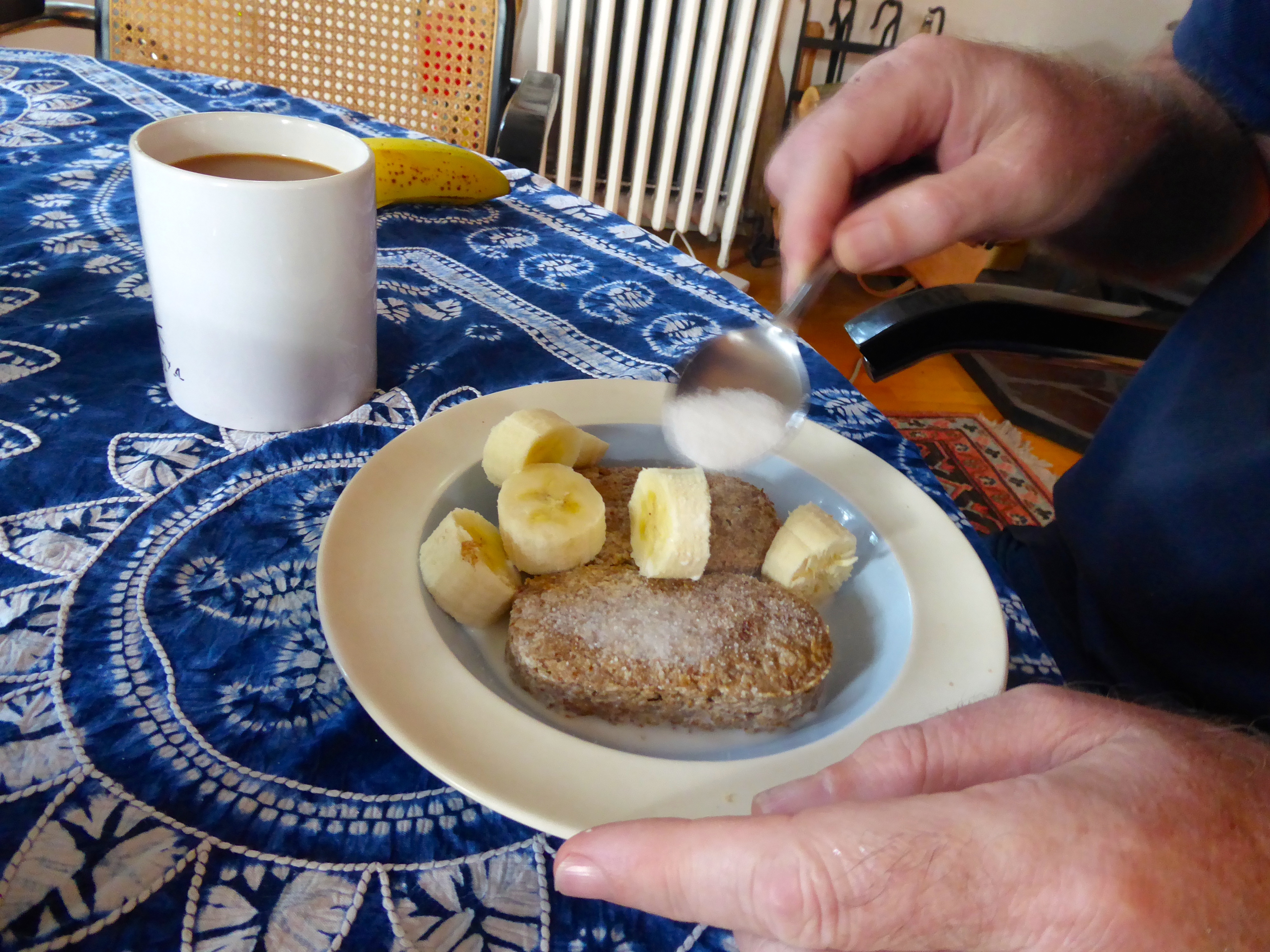 Finally, tilt the bowl towards you so you can nip off a bit of biscuit and spoon it up with some milk, retaining the crunchiness but also getting the milk. For Andrew the consumption of the entire bowl takes about 40 seconds; he insists that speed is essential so that all the elements of the bowl are properly mixed with the right texture.

Here I am trying to eat properly. Note that I’m tilting the bowl: 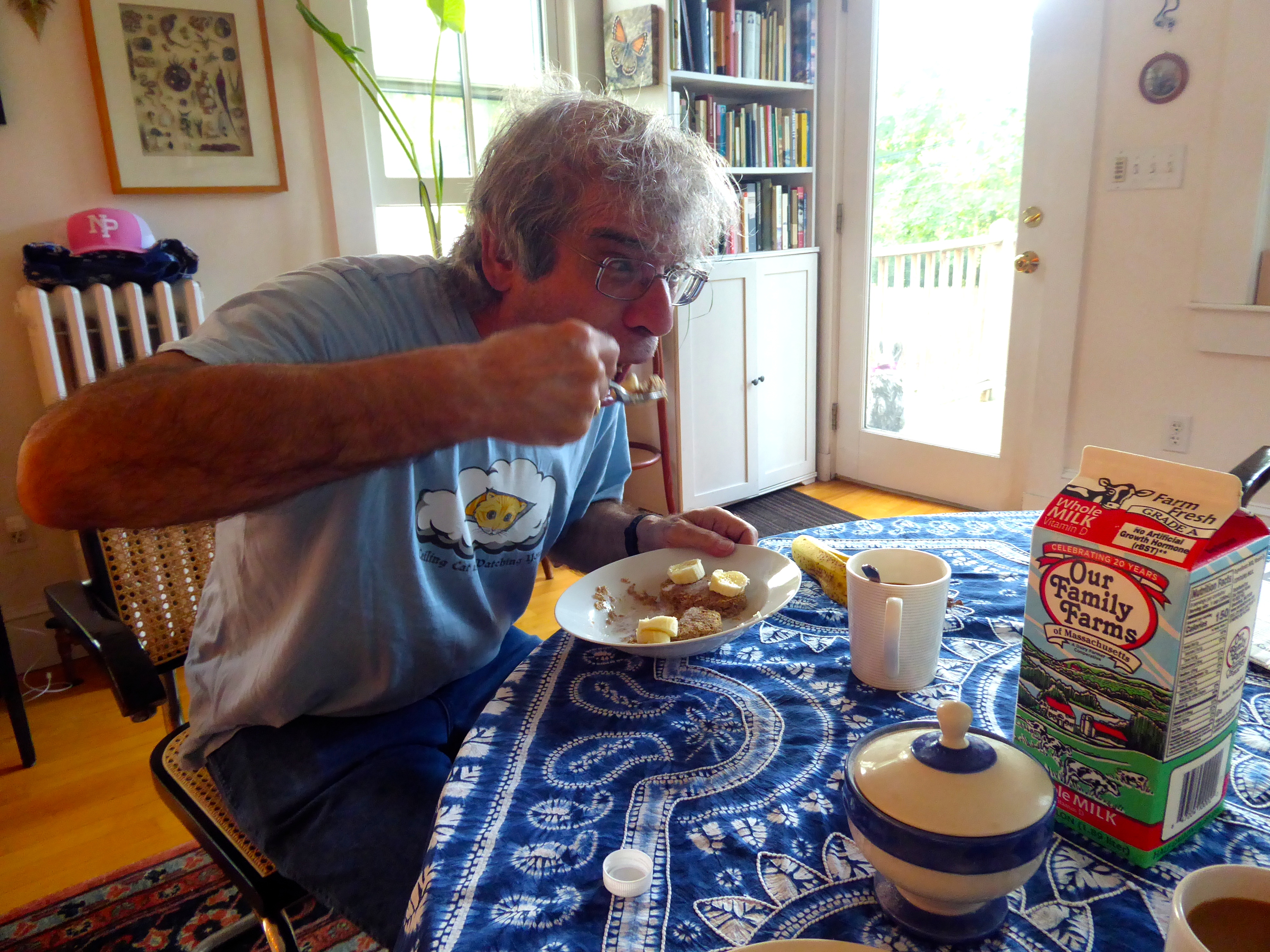 I persuaded my first set of hosts to try Weetabix, and Andrew located one store in Cambridge that sold them. My hosts’ son-in-law went there and got a box, which was delivered yesterday by their granddaughter. I am curious about whether they’ll like Weetabix, as both of them eat only homemade granola (a different mix for each person) for breakfast. Son-in-law and second grandchild to the rear; photo used with permission.

I think this photo would make a great Weetabix commercial! 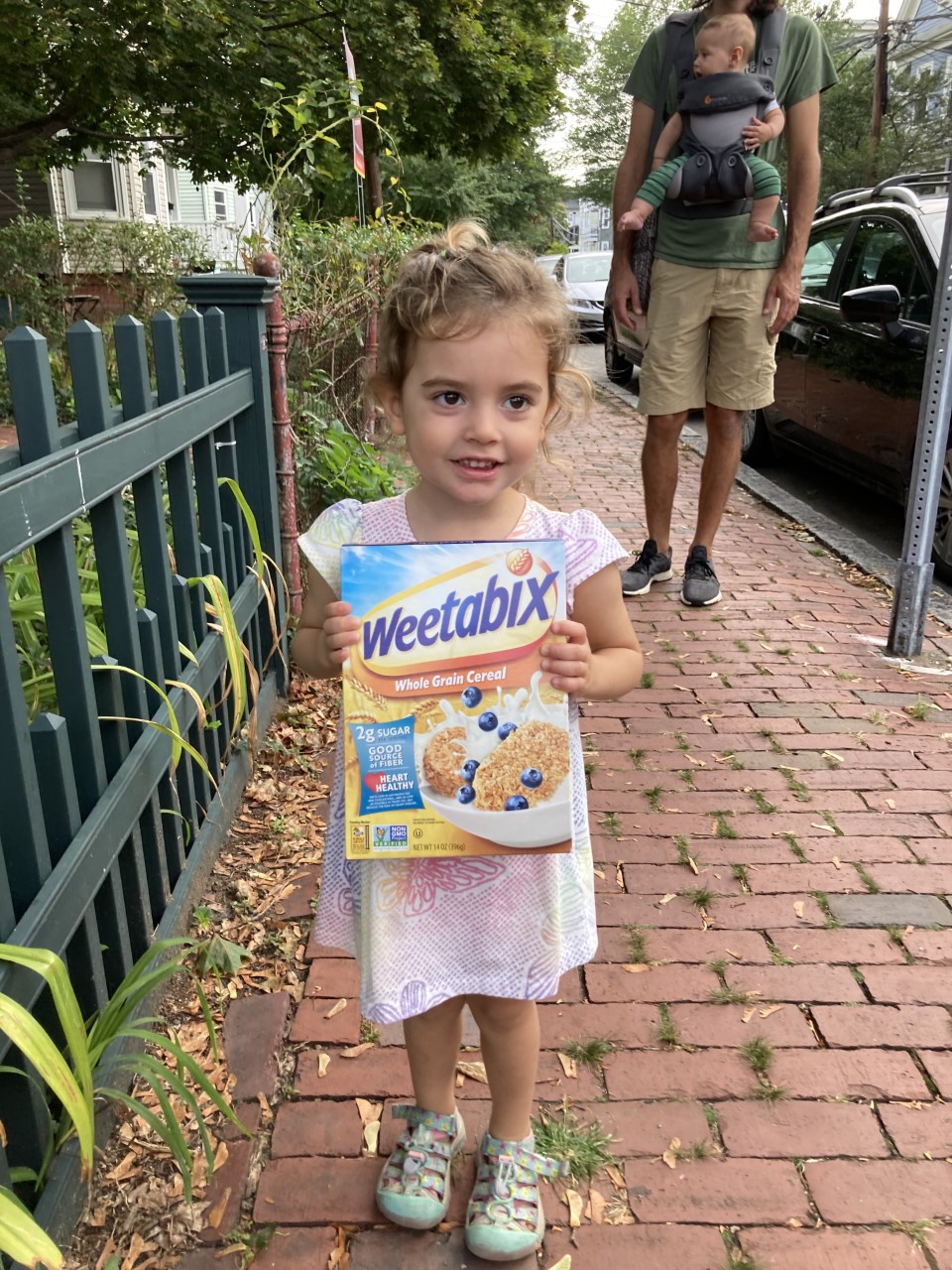 44 thoughts on “Food in the Boston area”