One of the big hot-button issues at the intersection of science and politics is the degree to which human behavioral traits, particularly IQ, are based on genes. To be more specific, the one question that can meaningfully answered about genes and IQ is this one: “What proportion of the variation among individuals in a population for any human trait (not just IQ, but also propensity to smoke, risk-taking, neuroticism, etc.) is based on variation among those individual’s genes?“  The figure showing that degree of genetic determination of variation in a population is called the heritability of the trait, symbolized by  h², and ranges from 0% (or 0.0), meaning that none of the variation you see in the trait is based on variation in genes (it’s due to environmental factors) up to 100%, or 1, meaning that all the variation we see in the trait is due to variation among individuals in their genomes.

I don’t want to go back again and explain heritability, what it means, and the difficulties with measuring and interpreting it, because I did that in a recent post, and if you want to know more, you might want to read that one first.

That earlier post also summarizes a new practice of finding an individual’s “polygenic score” (PGS) for a trait by correlating the variation in many DNA markers in an individual with that individual’s trait of interest, usually as an adult. This gives you a way to suss out suggestive information about an individual’s future behavior when it’s just born, for you can sequence the DNA of a newborn and. combining that with previous data on the PGS correlation with, say, educational attainment (degree of school completed) to get an idea of how far that individual will go in school. This is of course not absolutely predictive, of course, and has only one possible useful consequence that I can think of—more about that later—but it’s also a way to locate genes that influence variation in a trait. (We now know of 1271 regions in the genome that are correlated with educational attainment; each of these, of course, can have only a tiny influence on variation in a population.) Right now, the correlation between the “polygenic score” of an individual and his/her educational attainment is about 14% (it varies between 12% and 18% in the study below).

The use of PGS values in studying human behavior was the subject of the New Yorker’s recent profile of behavioral geneticist Kathryn Harden, which is a very good piece.

These PGS correlations are much lower than the traditional heritabilities that measure the contribution of the genome as a whole—via correlation between the performance of relatives with known relatedness)—with heritabilities of human traits, which, as I noted in the previous post, often range between 25% and 70%. The heritability of IQ in the American white population, which (for reasons that are debated) increases with age, ranges from 40% to 75% for adults, but I’ll use a conservative general estimate of 50% or 0.5. That means that about half of the variation in IQ in the white population is due to variation among individuals in their genes. While everyone is interested in IQ because, in good American fashion, it’s substantially correlated with conventional measures of “success”, remember that there are lots of interesting traits whose genetic variation we’d like to know about—my previous post listed about 30.

Today’s paper, which you might be able to access by clicking on the screenshot below (or get the pdf here), is a new study of the heritability of IQ that uses adoption instead of the “twin studies” described in my previous post. Twin studies have small samples because they estimate heritability of IQ using either identical or fraternal twins reared apart or together, and the “apart” number is quite small. I’ll describe the adoption method below: 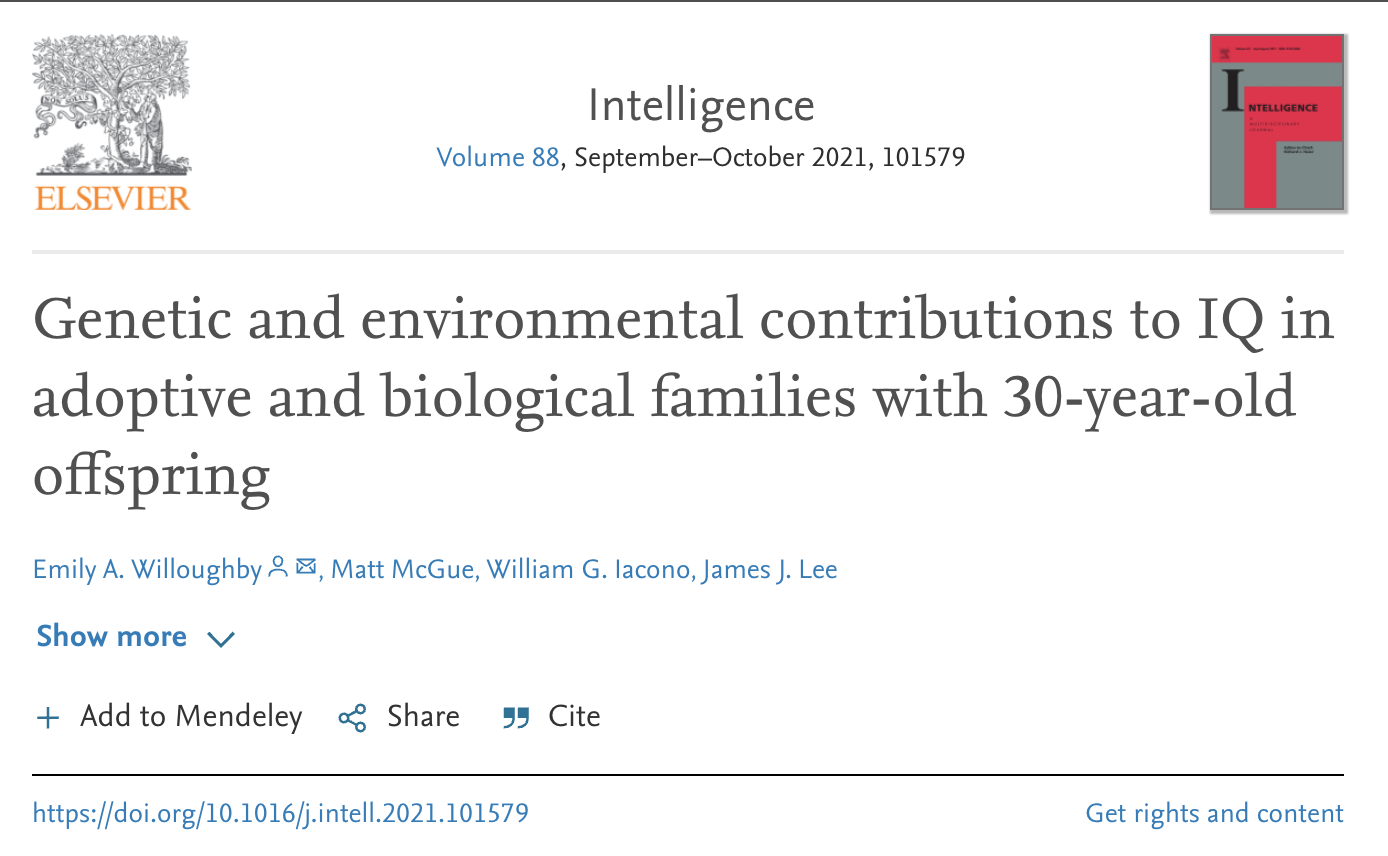 The principle is that if genes play a big role in variation of IQ, then if you take a child from its parent and have it brought up by an unrelated family, the IQ of the child, when it grows up, should correlate very closely with its biological parents and not very much with that of its adoptive parents. If, on the other hand, the correlation with the adoptive parents is quite high and with the biological parents low, we can guess that variation in the environment plays a much bigger role than variation in genes in IQ: in other words, the heritability is low. (This assumes that environmental factors that affect IQ are uncorrelated between biological and adoptive families, an assumption that was validated in this study.)

And these adoption studies exist. This one, in fact, was quite large. The researchers had access to 486 families who had given up a child for adoption or taken in one. 95% of the parents were of non-Hispanic white Caucasian ancestry, but 21% of the adopted kids were white, 66% Asian (probably inter-country adoptions), and 13% were of other ethnicities. This somewhat weakens the measurement of IQ as a statistic within a population, but it turns out that there was no difference in heritability whether you used the white or the Asian children.

The mean age of the adopted children was 4.7 months (oldest was 2 years old), assuring that there’s not much cultural influence on their intelligence before they’re adopted out. When older, these children, along with as many adoptive and biological parents who would assent, were given IQ tests. The adopted children were IQ tested at both 15 and around 32 years of age. The children’s IQ’s were then matched (when data from both parents existed) with the “midparent value” (average of mom and dad’s IQs, separated by “biological” or “adoptive” families), or with only one parent if that was all that was available.

The upshot is what you’d expect with a high heritability of IQ: the IQs of children at either 15 or in their 30s was much more highly correlated with the IQs of their biological parents than with their adoptive parents. Below are the charts showing the correlations with biological parents (left) and adoptive parents (right). Actually, they use “g” as the term for IQ, and they also have these data for a number of different sub-tests, which you can find in the paper.  The red lines are the regressions of offspring on parents at age 15, the blue lines for the 30-ish followup IQ tests. (Each dot is presumably one family.) The correlation of adults with their biological families (not the regression slope) is 0.42, a highly significant value, while with the adoptive parents it’s 0.10—close to zero but probably still significant (they don’t say), meaning there may be a slight rearing effect: the IQ of your adoptive parents could slightly affect the adoptive child.

Now the figures given are the correlations, not the slopes of the midparent-offspring regression lines, which are the heritabilities—what we want to know. The authors have calculated that heritability, but in a slightly more complicated way, and I give it below for adult data, along with its equivalent for environmental effects: the proportion of variation in IQ due to variation in an adopted child’s rearing environment. Here are the figures (“CI” is the confidence interval).

Proportion of variance in IQ attributable to environmentally mediated effects of parental IQs was estimated at .01 [95% CI 0.00, 0.02]

The heritability is close to the 50% figure I’ve taken to be a conservative value for IQ, and it’s still substantial: 42% of the variation in the population (although there are really more than one populations conflated here), is due to variation in genes.  The 95% confidence interval for IQ heritability is 21% to 64%, so the chances are 95% that the true value of heritability lies within that range. Ergo, IQ is pretty damn heritable.

In contrast, the proportion of variation due to parental environment (adoptive parents) is estimated atjust 1%, with a 95% confidence interval of 0% to 2%.  There seems to be a very small effect of rearing environment on IQ compared to genes.

Why do we want to know this? I’m running out of gas, as this paper was complicated, so I’ll devote a very short post to that either today or tomorrow.

26 thoughts on “The heritability of IQ from an adoption study”