We haven’t had a duck report in a long while, and I apologize. Things have been busy upstairs, but calm at the pond, and the last week’s weather was a delight for both ducks and their staff.

We have a stable population of 10-12 ducks now, all hens except for one obstreperous drake who tries to get everyone’s food. It may be Shmuley, but we’re not sure, and we’re all mad at him because he’s greedy. Otherwise, there is Honey, who has come and gone sporadically, but is now here until she finishes molting (she can’t fly until she grows her feathers in), and also a molting Coco, who reared her small brood of three up to flight. They’re mostly gone now, as are all the other babies we’ve had this year.

There are also about four molting ducks, who we’re feeding until their flight feathers are full sized. We don’t feed the other itinerant, undocumented ducks so they’ll be prompted them to leave, presumably to the “staging areas” where ducks gather before their Big Fall Migration. The University is planning to dredge and redo the pond soon, but they don’t give us information about it.

Here’s Honey on August 13 in full molt; you can see that, compared to the second photo, her primary (flight) feathers have not yet grown in. But it’s been three weeks since this photo was taken, and she’s able to fly now. 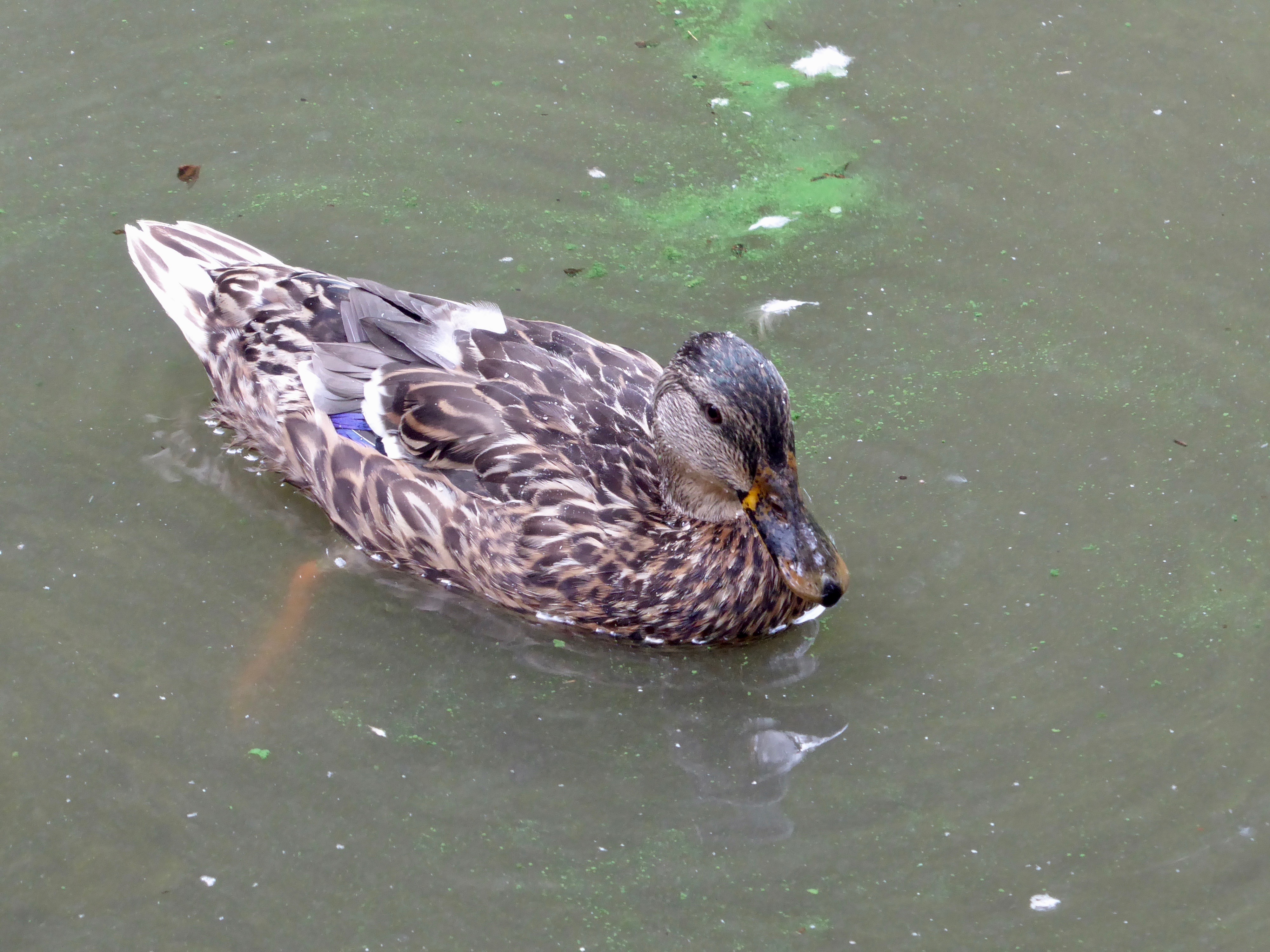 Here she is from August of last year, and you can see those big primary feathers crossing over her tail: 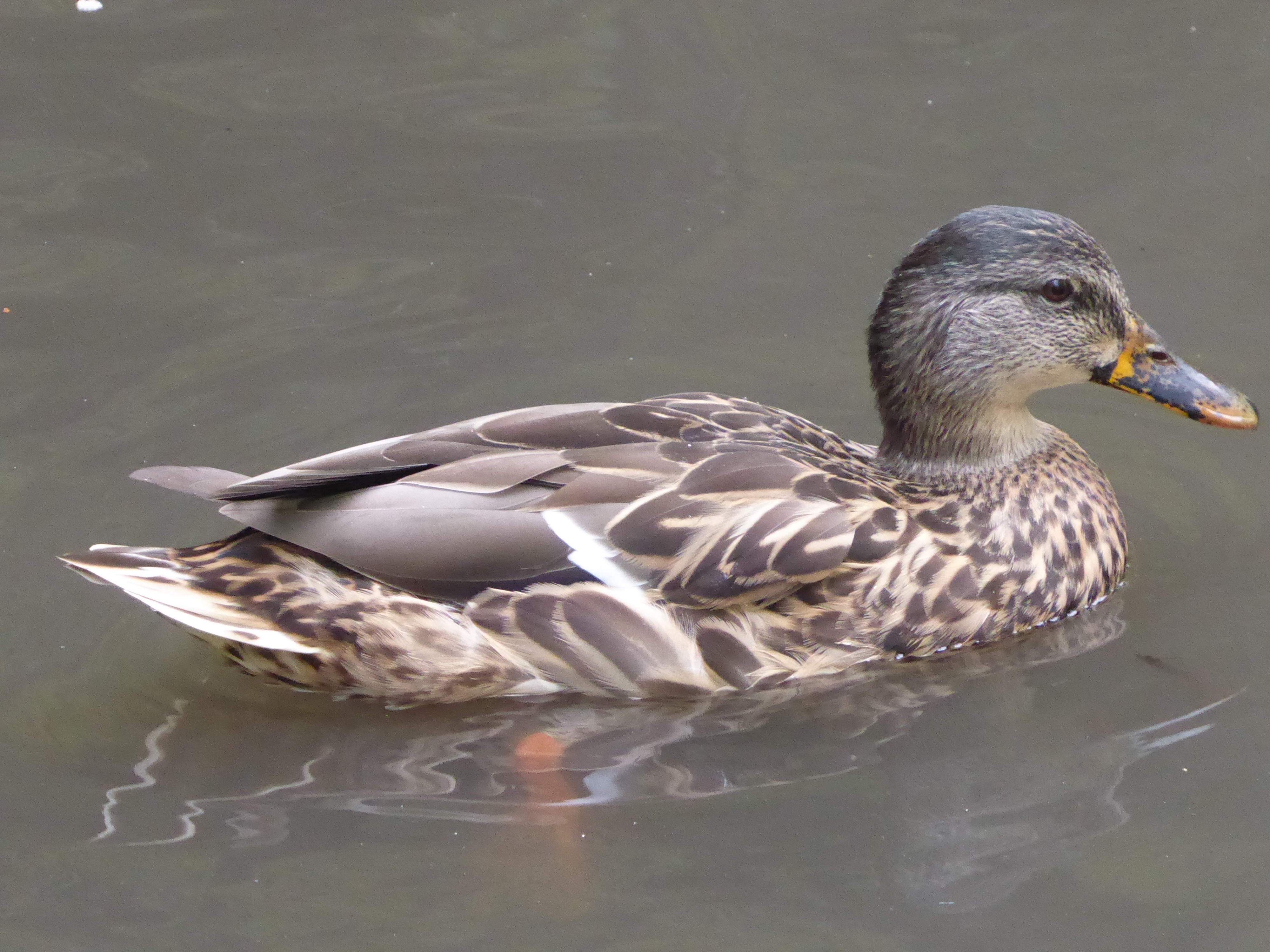 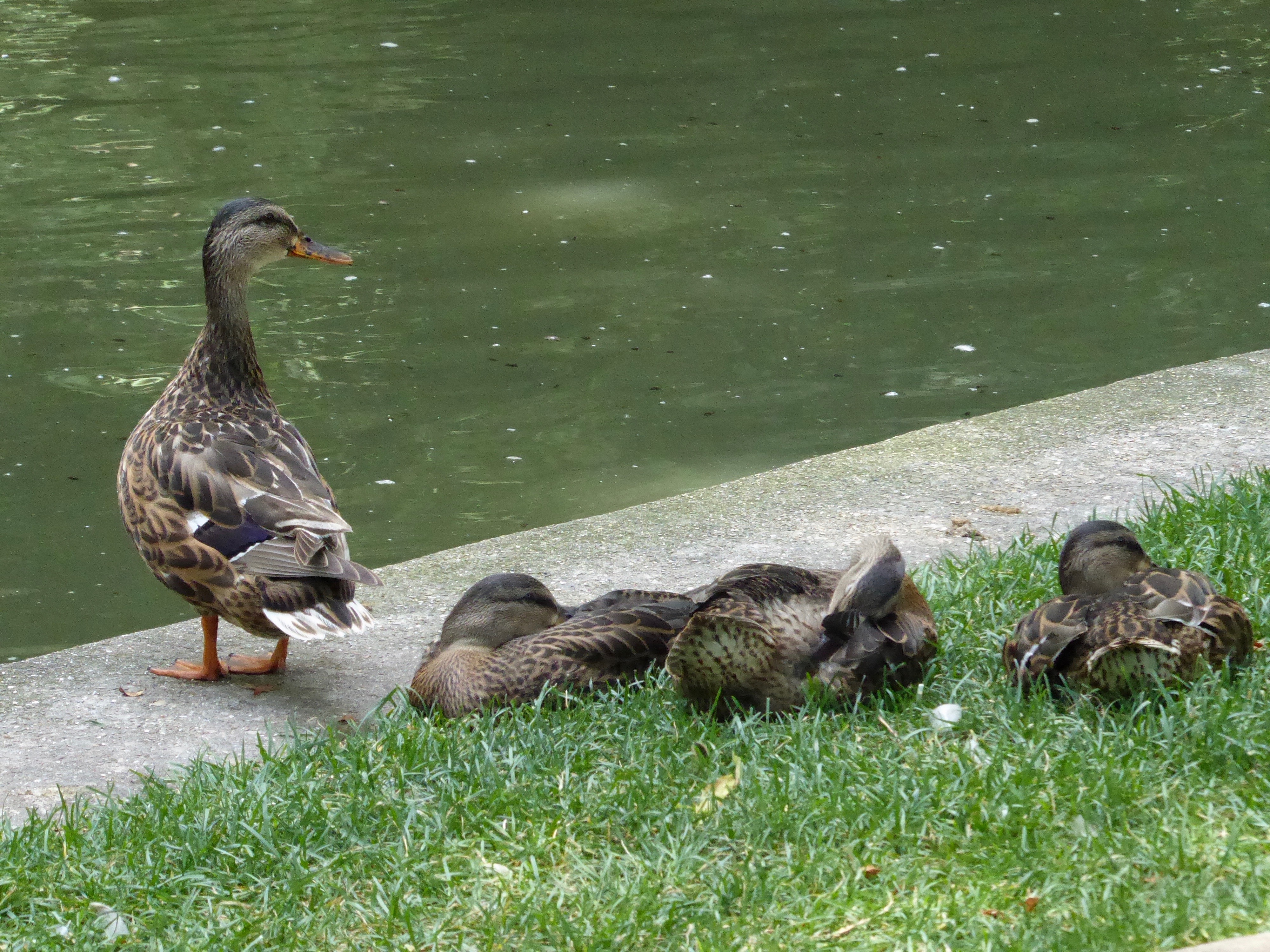 And to show you have big they’ve grown, here they were on June 27. It’s about six to seven weeks from birth till flying. 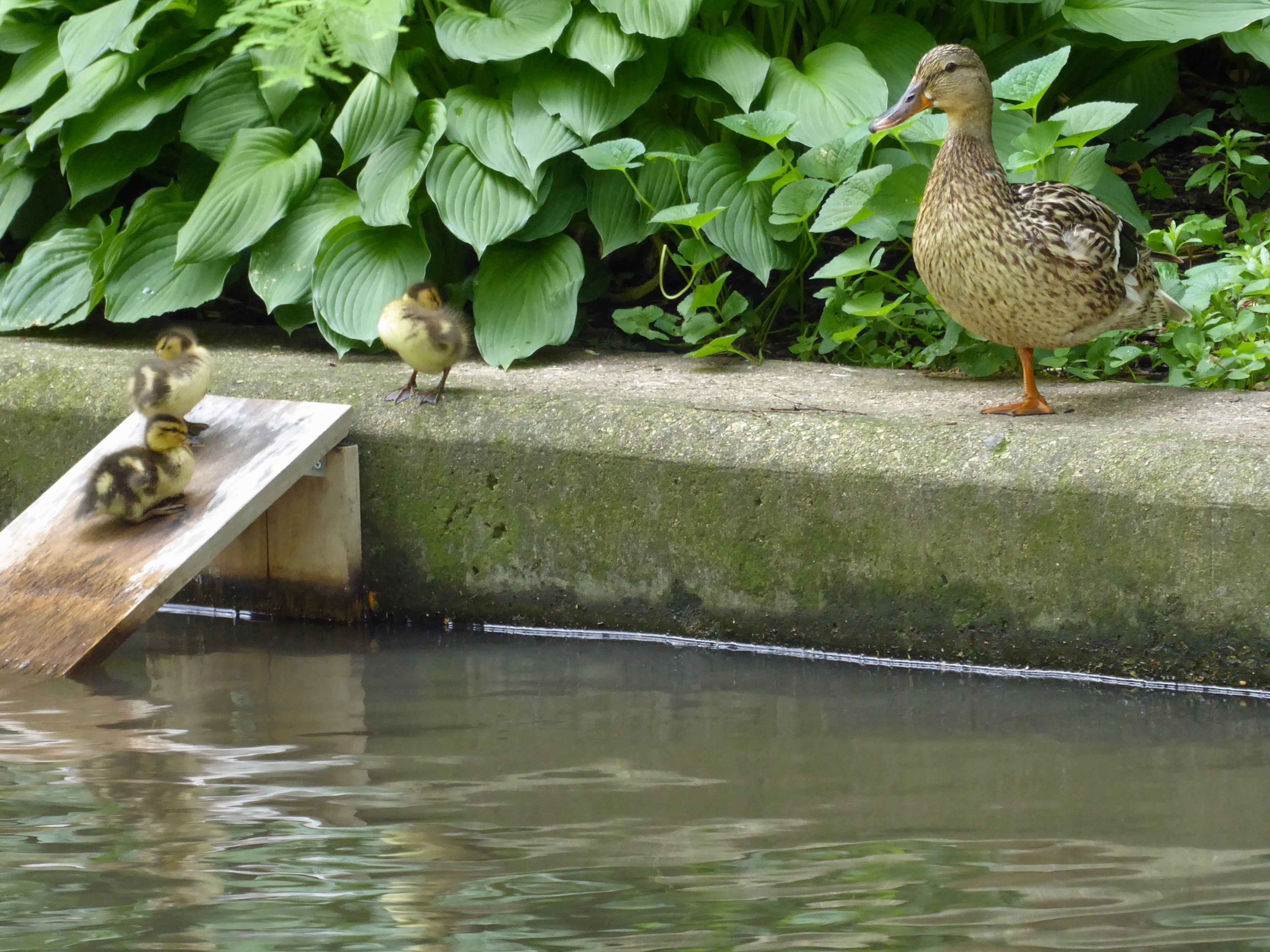 Resting next to mom a long time ago. It makes me proud to think that I might have helped those little yellow balls of fluff develop into mighty ducks able to fly south for the winter. 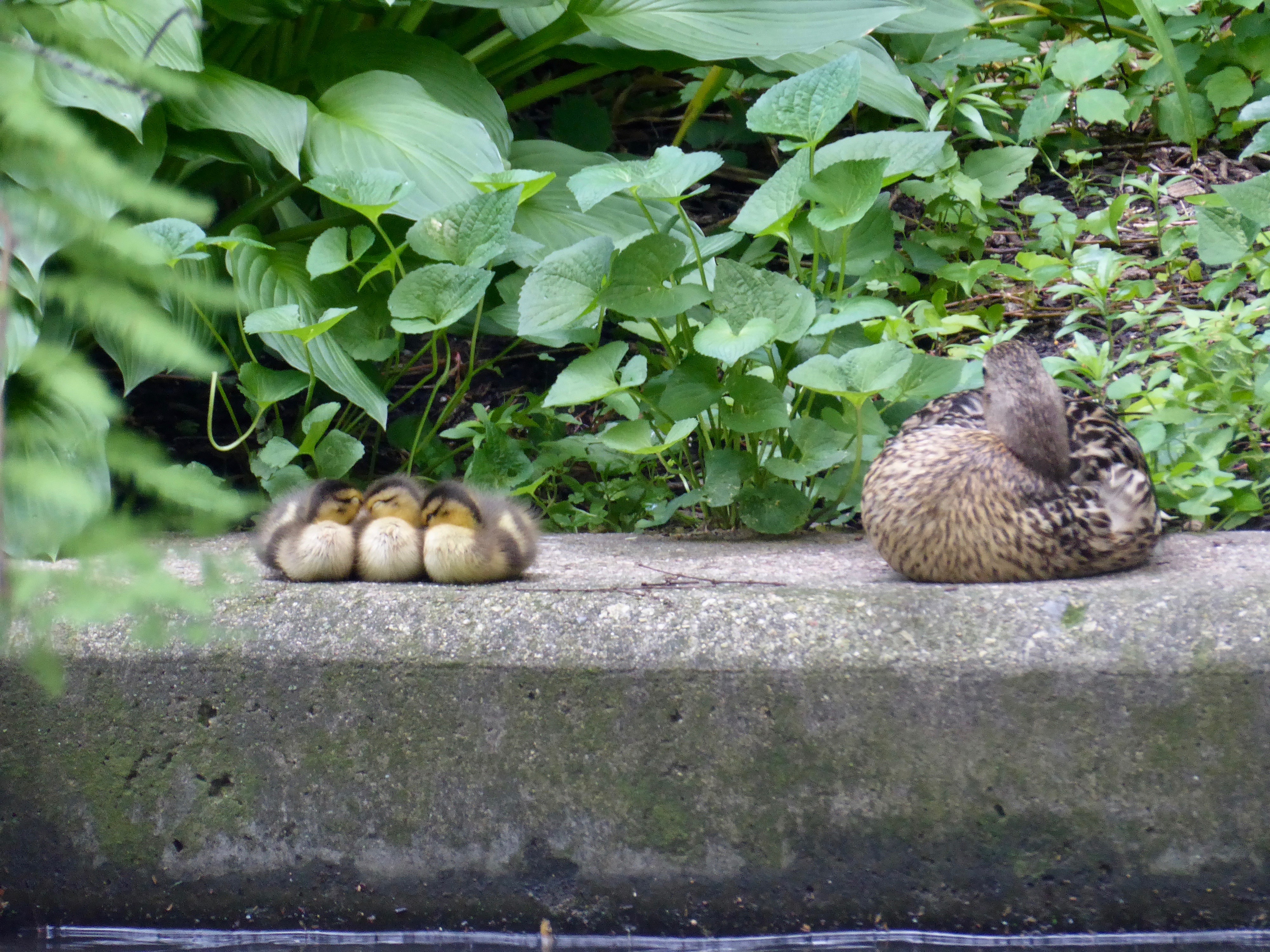 As always, the ducks get frisky after lunch, and, if it’s not too hot, engage in vigorous bouts of “zoomies,” which involves splashing, flapping wings, diving, and some flying. Here’s a video showing their frolics on August 24.

If you hang around and watch ducks, you’ll see that they’re fastidious creatures, spending hours grooming themselves, oiling their feathers to keep themselves waterproof, and generally making themselves immaculate. Here’s a pair tending to their feather raiment:

Every year we get a “trick duck”: one who can do some kind of performance. Last year it was Ginger, who we trained to hop up on the metal fence to get food. This year it’s Cindy, who from the outset was a sweet and gentle hen, and approached us a lot. It didn’t take long for us to figure out that we could feed her from our open hand. The result: she’s the best-fed duck on the pond. We all love her.  Here’s a video of Cindy eating from a hand; notice how gently she takes the pellets.

One of the six members of Team Duck, Marie Schilling, feeding Cindy. Cindy and Marie are BFFs. (Cindy has also learned to fly onto the bridge to get fed.) 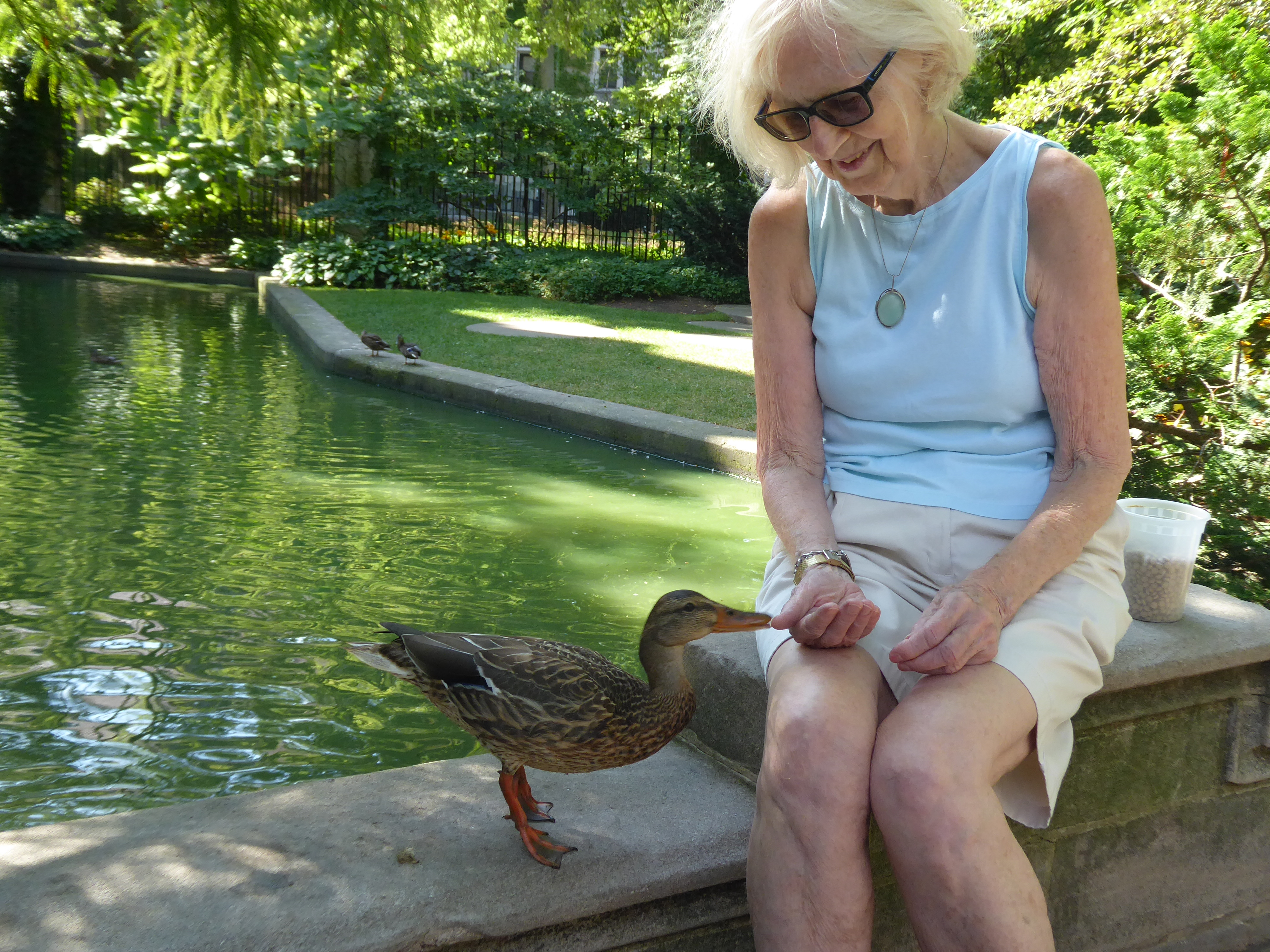 A formal portrait of Cindy: 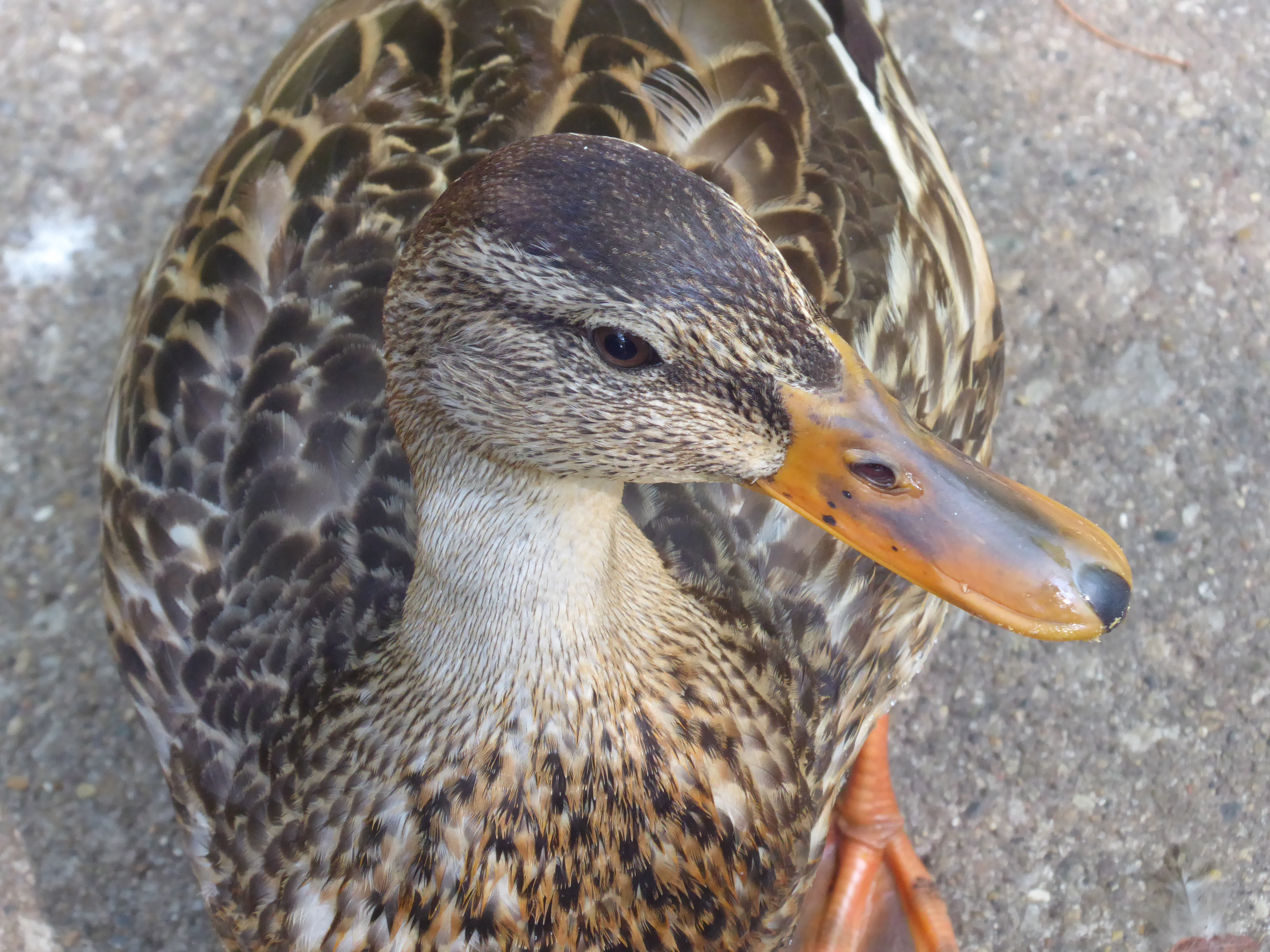 Another duck named Gretchen has also learned Cindy’s trick, and will eat from a hand, but using hard and rapid repeating pecks. They can hurt! We don’t like Gretchen as much as we do Cindy, but we do indulge her from time to time out of masochism.

Sadly, Frisky the male wood duck left about three weeks ago; we had him on and off for about two weeks. He was a lovely thing, but we never got to see him go through his full molt and develop that big green crest on his head. I’m sure this is the same male who was here last year, as he knew what a duck pellet was from the outset (he didn’t last year), and also behaved the same way (see below). 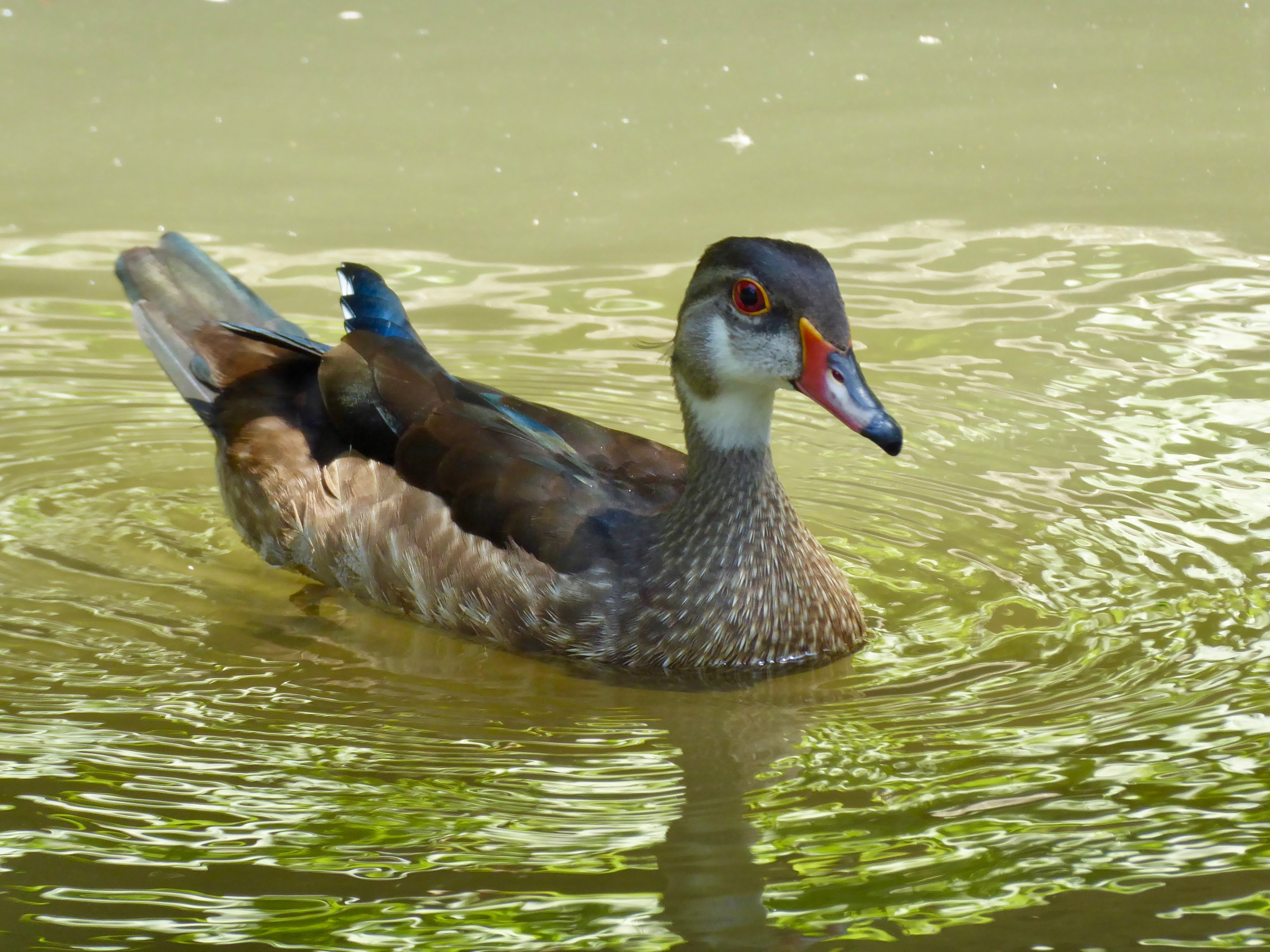 Just like he did last year, after meals Frisky would go straight to the South Duck Island and perch on a cedar knee, surveying the pond. It’s this identical behavior that convinced us that the same woodie had returned this year. 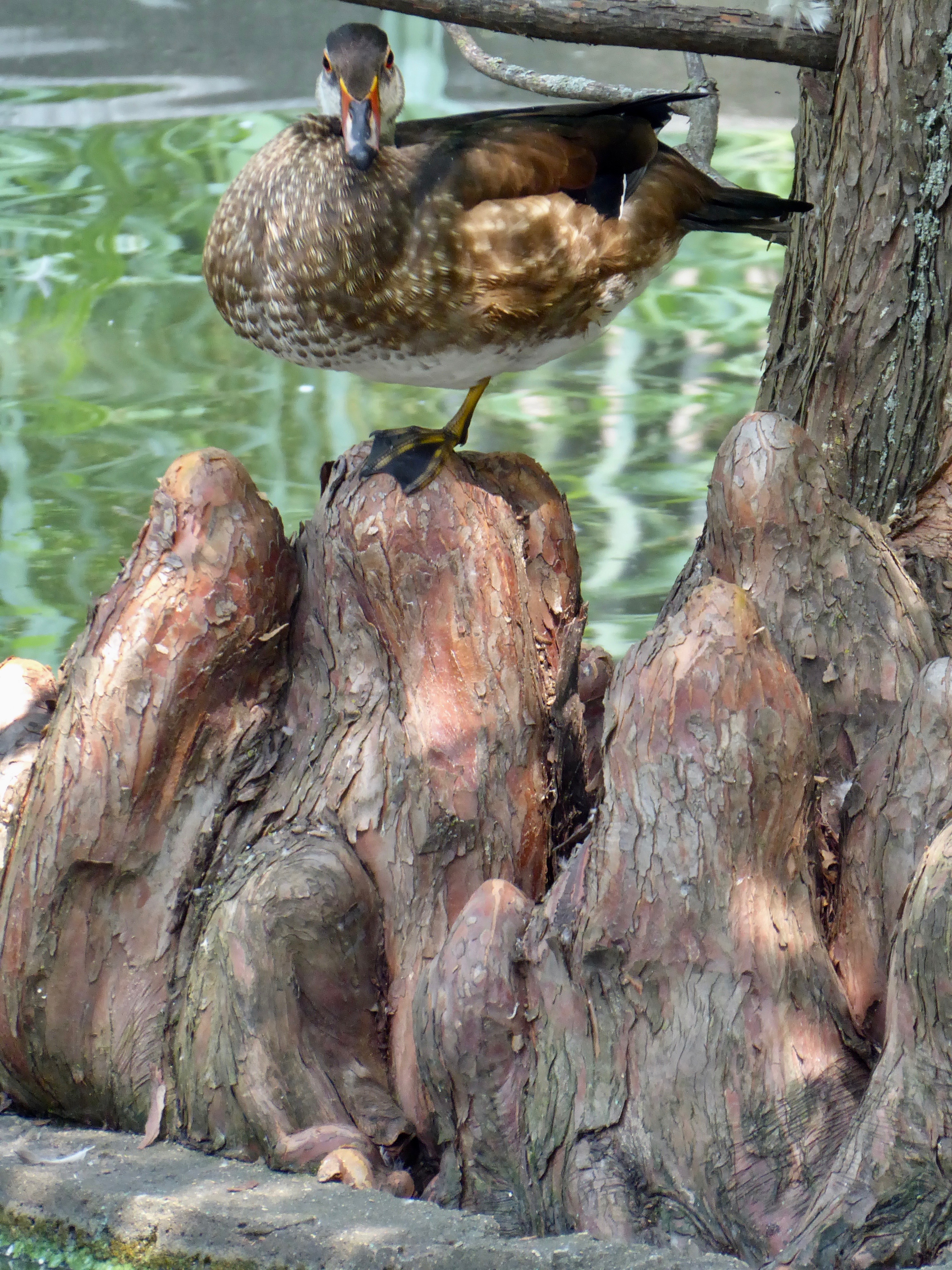 We mustn’t forget the turtles. As I reported before, two of them dug nests and deposited eggs by the pond edge, carefully scraping soil over the nests so they were invisible. Greg got very excited when he heard this, as red-eared sliders hardly ever breed this far north: it’s too cold. Greg made a trip down from Wisconsin to photograph the nests and gently uncover them until we could be sure there were eggs there. We measured them accurately and then Greg covered them up again.

I’ll be watching the nest sites over the year; it’s possible the eggs may hatch before fall, but neither Greg nor I are hopeful that there will be any hatching. If there is, we’ll write a note for some fifth-rate herpetology journal that documents this kind of thing. (Certainly all the turtles we have in the pond were put there by people who wanted to get rid of them; there has been no sign that they’ve produced babies as we never see tiny turtles.) 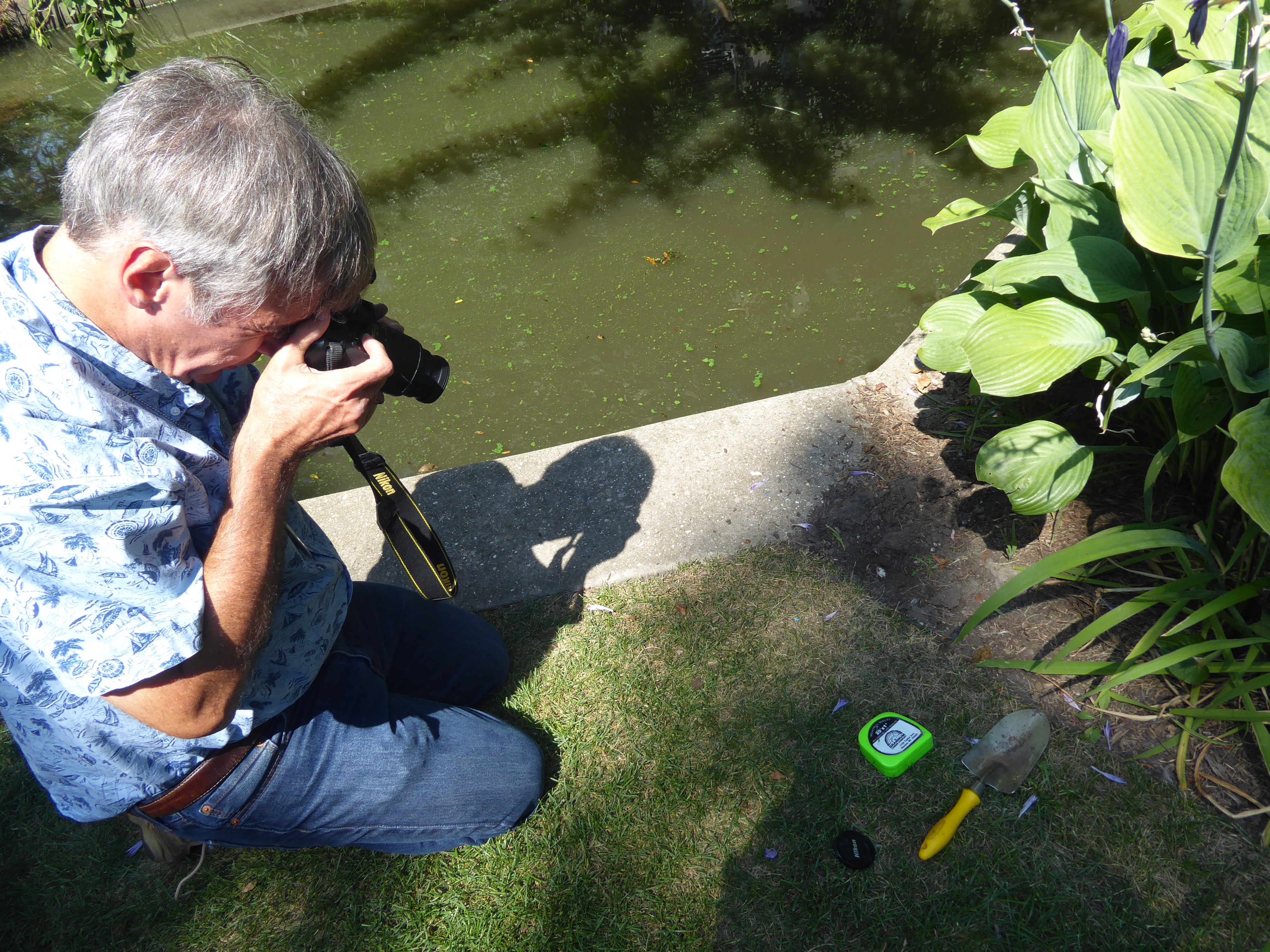 A turtle egg. As soon as we ascertained that there were eggs there, we stopped digging and covered the nest up. We suspect there will be about half a dozen eggs in each of the two nests. 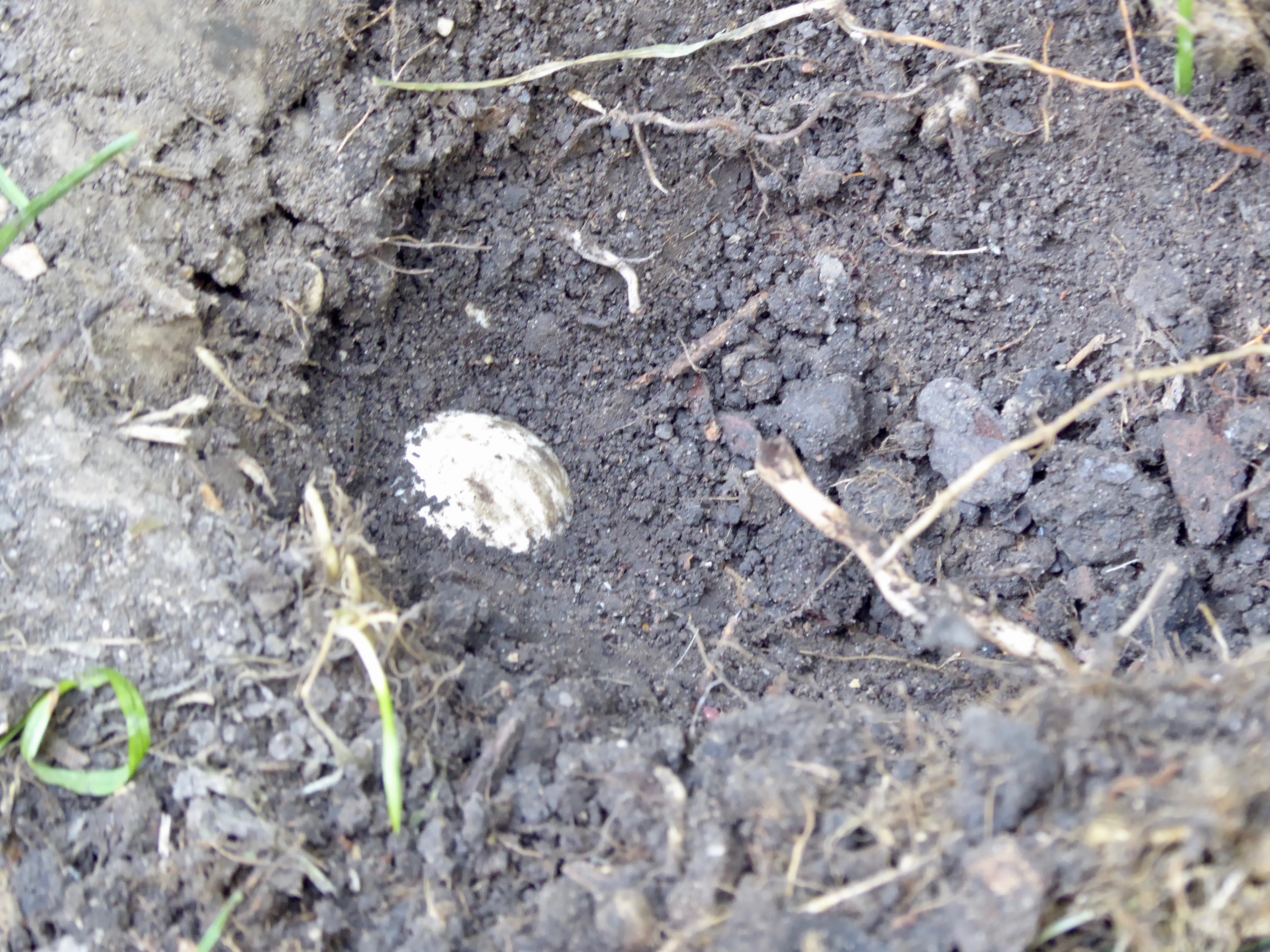 A rare perching on our “duck fence”, designed to give the babies an undisturbed place to rest and dry out. (Thanks to Facilities for putting it up, and for making the sign!).

Love the ducks, but don’t disturb them! 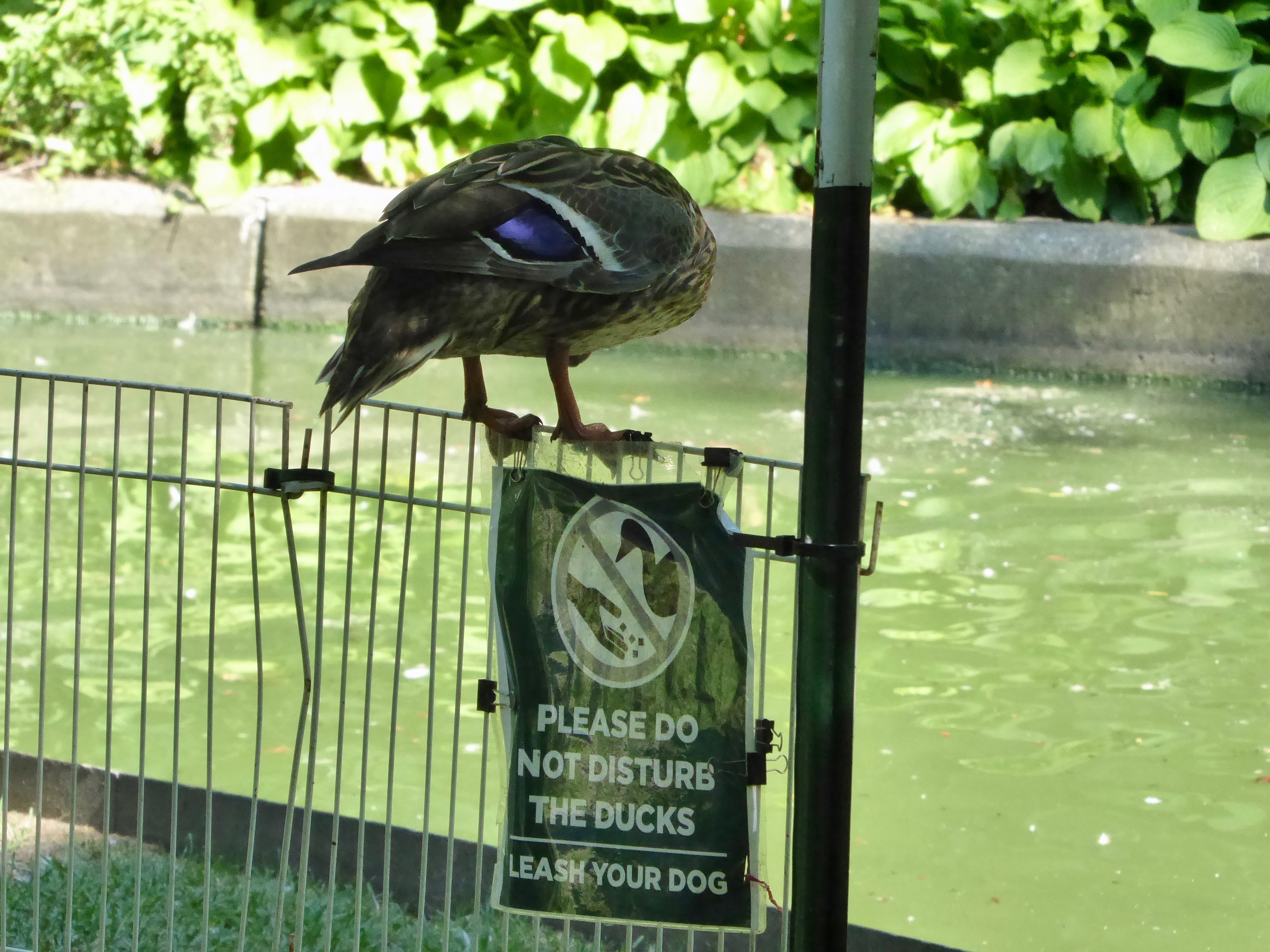