I think John McWhorter should write one column per week in the NYT instead of his contracted two, as the two-column gig just takes up too much time, and something’s gotta give. After his barnburner critique of performative anti-racism on Tuesday, McWhorter’s plumb worn himself out. Or so it appears from his much shorter piece today, which is on how spoken American has gotten more polite.

You can’t get this at the NYT yet, or by clicking on the screenshot, as it hasn’t yet appeared in the op-ed section, and you have to subscribe to see it anyway. Perhaps a judicious inquiry will yield the piece. 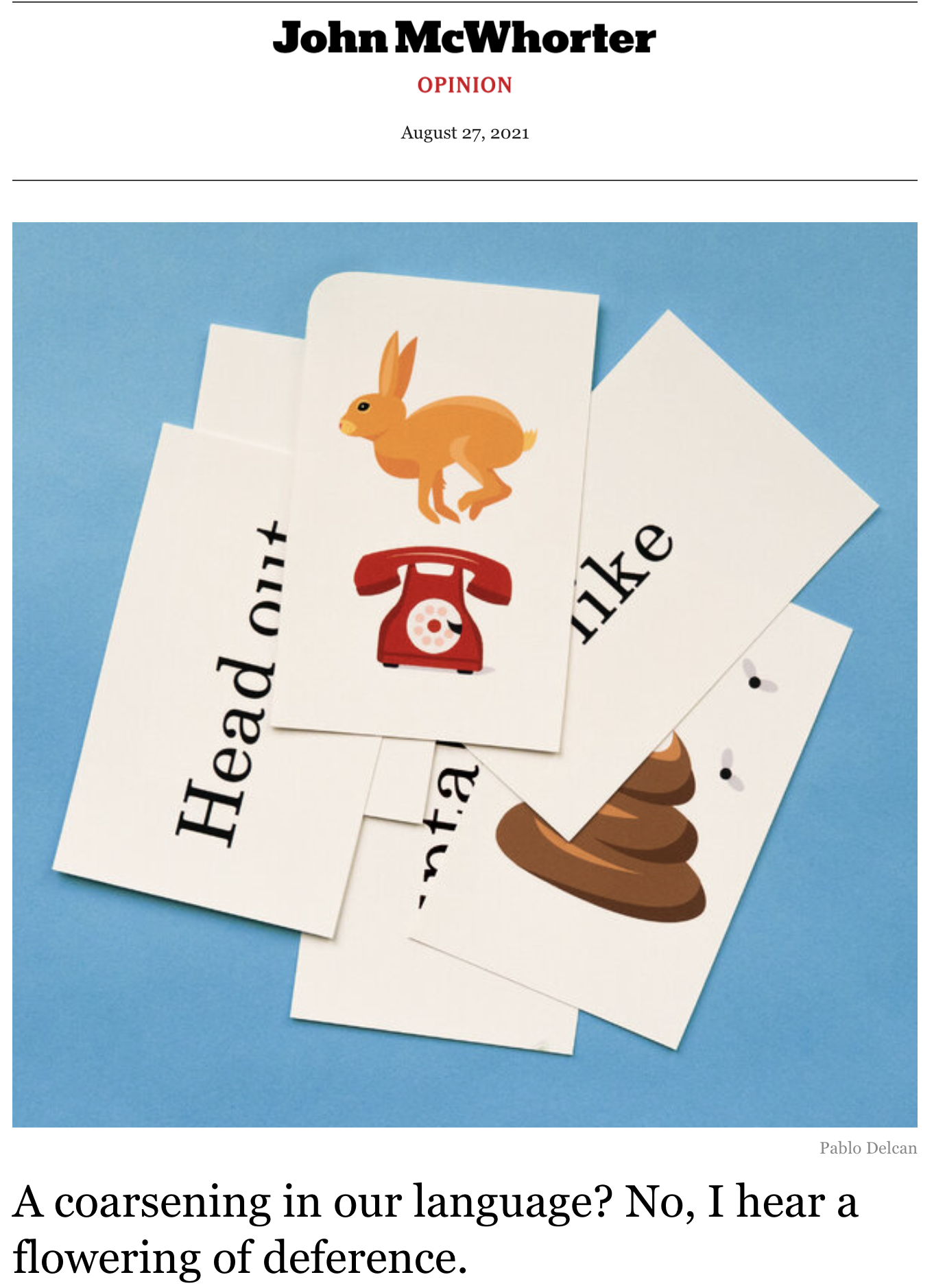 Of course McWhorter is a linguist, and this stuff is his bread and butter, but somehow I can’t get as juiced about contrarian linguistics as I can about McWhorter’s contrarian (for a black man) take on antiwokeness.. Ergo, I’ll be short.

McWhorter says that, contrary to our impressions, American language has not gotten rougher, with more frequent use of profanity, but in fact is becoming more polite. And politesse is, he says, one of the functions of language. When you take leave of a friend you don’t say “I am leaving now”, which is rude, but rather the gentler, “I’ll be heading out.”

To defend his thesis, McWhorter has to make some stretches. “Uptalking”, the irritating habit of ending a sentence with a rise in pitch, like a question, now becomes a form of checking to see if the other person is following you, “acknowledging the other person’s presence and marking their engagement and interest.” I wonder how we accomplished that before some people—no, not even most of them—adopted this annoying intonation. We did it by politely engaging in conversation.

And as for the reprehensible and nonstop insertion of “like” into every sentence, McWhorter also, like, likes that, too. He says, like, the word actually conveys different meanings depending on, like, how it’s used:

The infamous usage of “like” is a similar story. It’s easy to hear nothing but hedging in it — “That was, like, not a great thing to do.” But a linguist can break (and has broken) the new “like” down into assorted usages beyond hedging. For example, if a guy says, “We looked in, and it was so crowded. And not just a few kids. There were, like, grandparents and cousins in there. We had to go somewhere else,” he isn’t hedging; he’s stressing his point. The function of “like” there is to imply, “You might think it was just some kids, but actually ….” He is thinking about the state of mind of his interlocutors as he speaks.

Well, “but also” would have conveyed the same meaning. Yes, language changes, and we’re not going to get rid of “like”, much beloved of the younger folks (although notice that you don’t hear it on the evening news). But how many of us have heard a conversation between two young people in which almost every other word is “like”? And no, not every use of that word has a different meaning, or even a meaning.

As for curse words, which you hear increasingly in the movies or in prose (and I don’t mind that), those too show McWhorter that English is getting ever more polite.  Here’s how he justifies that:

A possible objection here is those four-letter words flying all over the place. I certainly use them more than my parents did, and most would consider me a reserved sort — and yet in this, I am not unusual for people my age. How much sweetness and light can we really see in an American English that allows into polite society people who use a certain F-word dozens of times a day?

But we need to change the lens here. It’s less that people use profanity more than that profanity is no longer as profane as it used to be. What people treated as truly bad words 100 years ago are now more realistically classified as salty. By my parents’ time, this was true of “damn” and “hell”; to dismiss something, they’d say “Oh, to hell with that,” even in front of kids. Today, though, my equivalent — and yes, sometimes in front of kids! — would involve that word that begins with “f.”

But I’m not sure what he means by saying that they’re used more often because “they’re not as profane as they used to be.” Perhaps they became less profane because they were used more often! After people like Lenny Bruce and George Carlin broke the taboo by speaking the taboo words onstage, people realized that you could get away with using in public words previously reserved for private conversation.

I won’t go on; the piece is light, larded with claims about how phrases like “hop on the phone” and a waiter saying “I’m going to go ahead and take your plate” are harbingers of a new and kinder English, a “delightfully considerate language if you know where to listen for it—in informal language.”

Well perhaps McWhorter is right. After all, he’s a linguist and I’m not. But I’ll never get used to fifteen “likes” in a sentence, and I still think that uptalking is also a sign of insecurity. McWhorter most engages me when he’s in a hot passion about the follies of wokeness, not when highlighting the nuances of English. It’s his column, of course, and he’s perfectly entitled to write about his profession. But I bet he wasn’t hired by the NYT to talk about linguistics, at least linguistics unrelated to politics. And dare I say that he’s better when writing about politics and ideology than about language?

29 thoughts on “McWhorter returns to the mundane”