Today we have photos of owl-banding from Robert Placier. And not just any owl, but the second smallest owl in America: the Northern Saw-Whet Owl, Aegolius acadicus. (The smallest and lightest owl in America, as well as the world, is the elf owl).  Robert’s commentary is indented, and you can enlarge his photos by clicking on them.

These impossibly cute and feisty little birds are a joy to work with. I started in 2003, working with partners, and have handled hundreds. So I can get carried away easily. I’ll try to send enough pictures to give an idea what I/we do, and hold text to a minimum.

First, Northern Saw-whet Owls are the smallest in eastern North America. But they don’t nest anywhere near my southeastern Ohio home. They start showing up here about the middle of October, and generally few “new” (unbanded) birds are captured by the first week of December. Some do overwinter in my area, others are apparently just passing through. 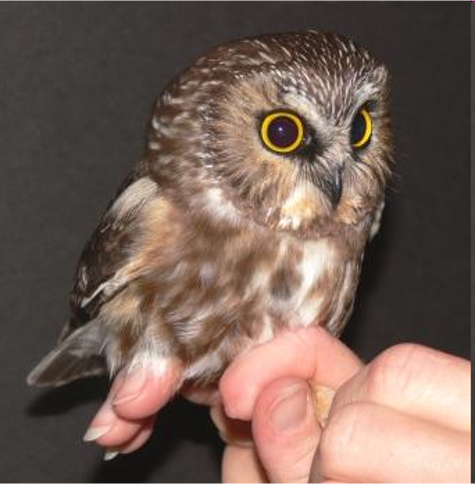 They are, like most owls, nocturnal. So Saw-whet banders open nets at dusk. Some folks operate all night, I generally shut down by midnight. Here’s me removing an owl from a net. Photo by my brother-in-law. I don’t have a photo of the apparatus, but we use a battery powered audio-lure to bring in the owls. We play the male display call, going continuously from beginning to end of the session. 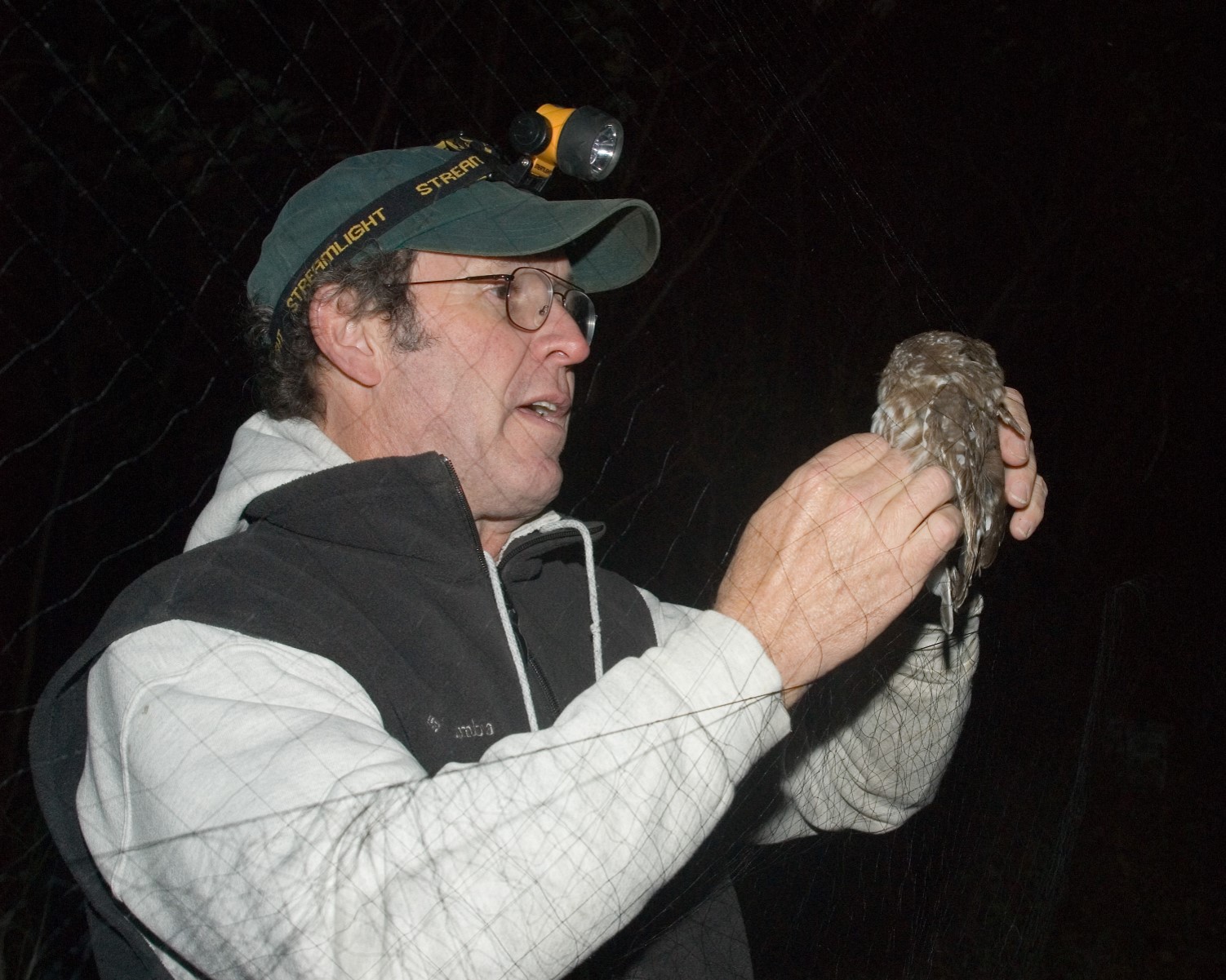 Some banders do all the work of capture, data collection, and release outside. But most have some place to take the birds inside for the banding and data gathering. Before releasing the owls, I place them in a holding bag hung up in a safe and dark spot for at least 15 minutes to allow their eyes to readjust. 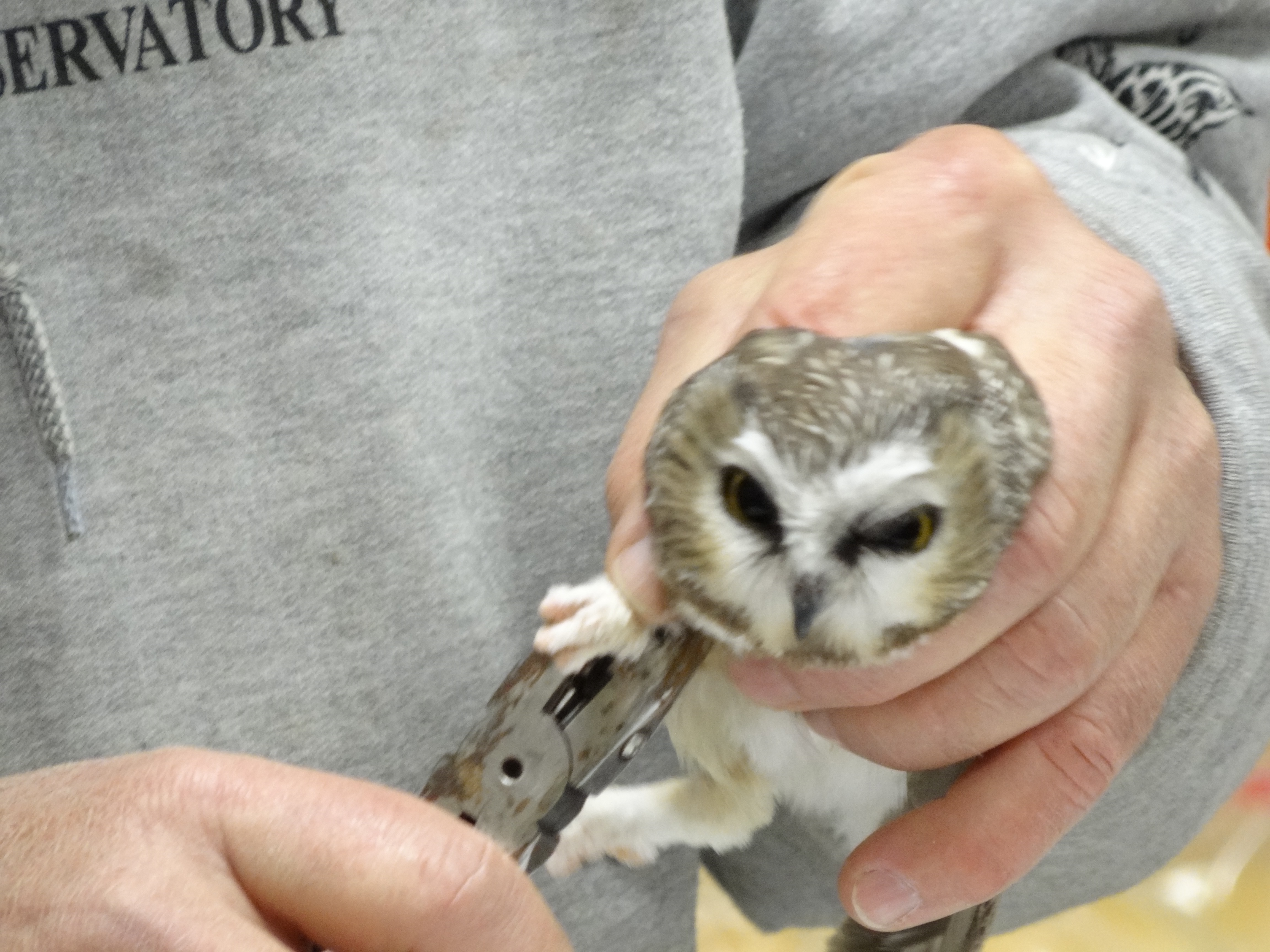 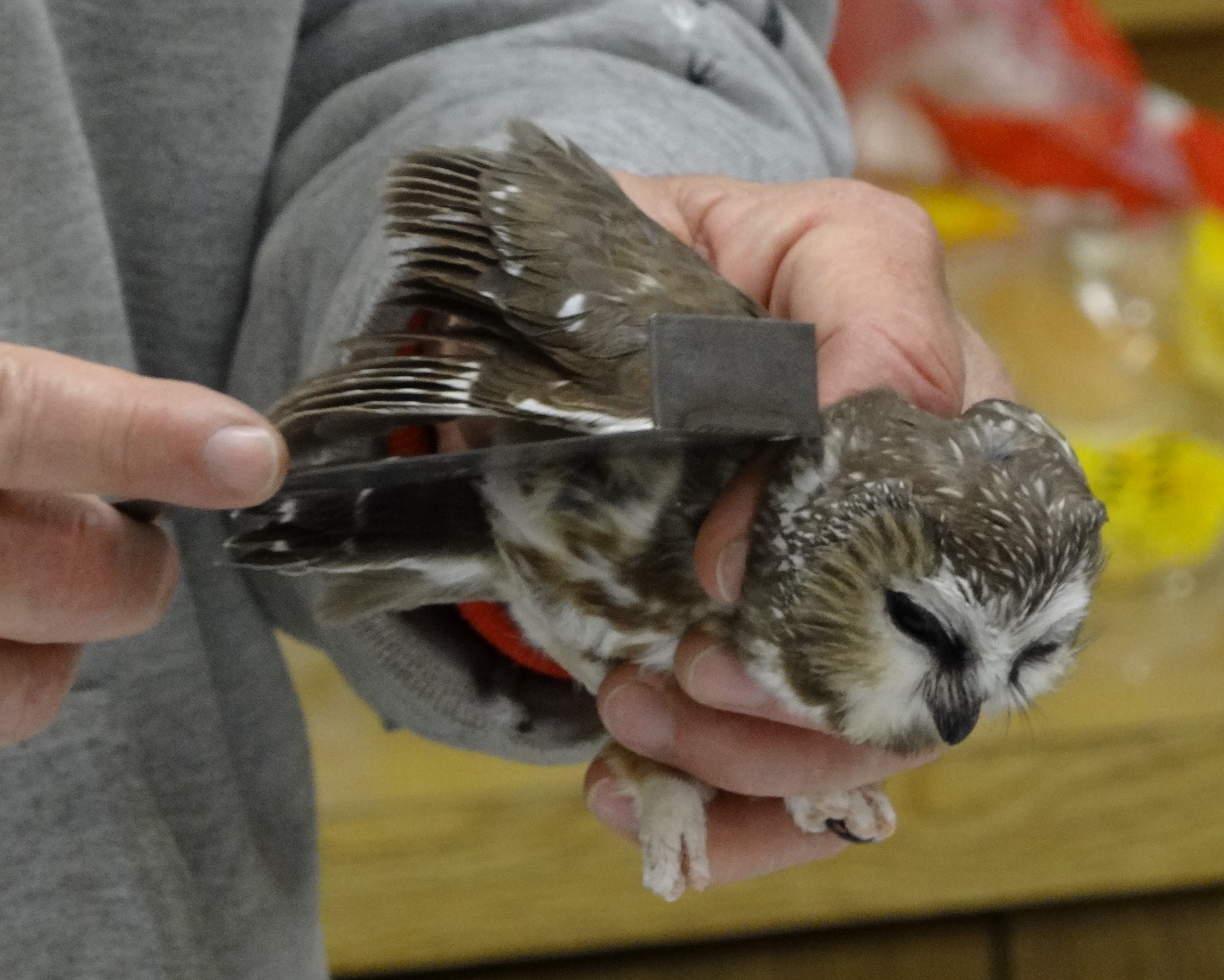 We use a discriminant function to determine sex of Saw-whets. This combines the mass of a bird and its wing chord. About 70% of Saw-whets can be sexed this way at the 95% confidence level, at least in my area. I have never had a Saw-whet that weighed as much as 120g. They must be heavier out west; I don’t know the provenance of the data in this scattergram. As in all owls, females are on average larger. Banders at my latitude catch very few males, who apparently try to stay farther north. 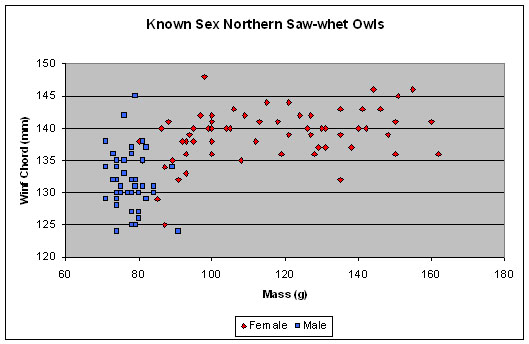 The next part is pretty cool! All owls (and some other birds, such as parrots) incorporate a bile pigment, porphyrin, in their newly grown feathers. In owls, at least, the porphyrins generate shades of brown. And, interestingly for our purposes, the freshly deposited porphyrins glow bright pink under a black light. They also break down over time and exposure to sunlight, and older feathers contain less. Combined with the fact that Saw-whets replace only part of their flight (wing) feathers each Fall, it is possible to age Saw-whets, within limits.

This is the wing of a “hatch year” (born this year) Saw-whet captured in the Fall. No flight feathers are replaced in young of the year, so they glow uniformly pink. 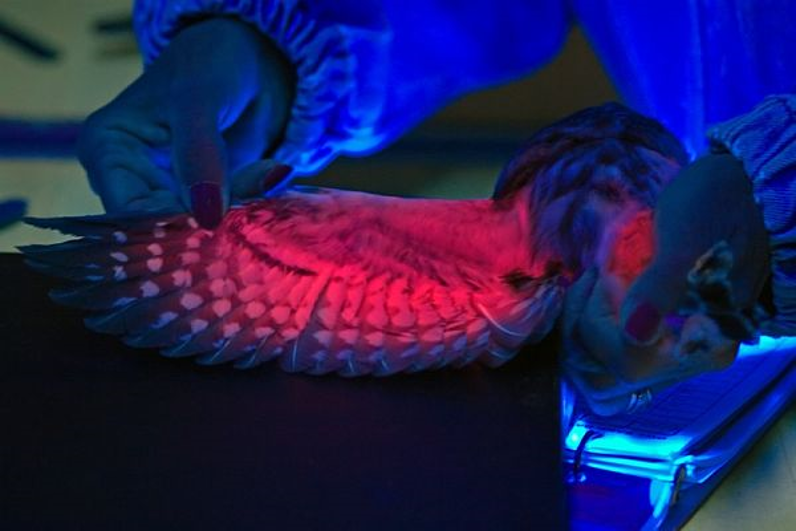 Explaining the feather replacement pattern would take too much text, but this owl would be aged as “after second year” in the Fall, in its third year of life. There are three, at least, ages of feathers visible. 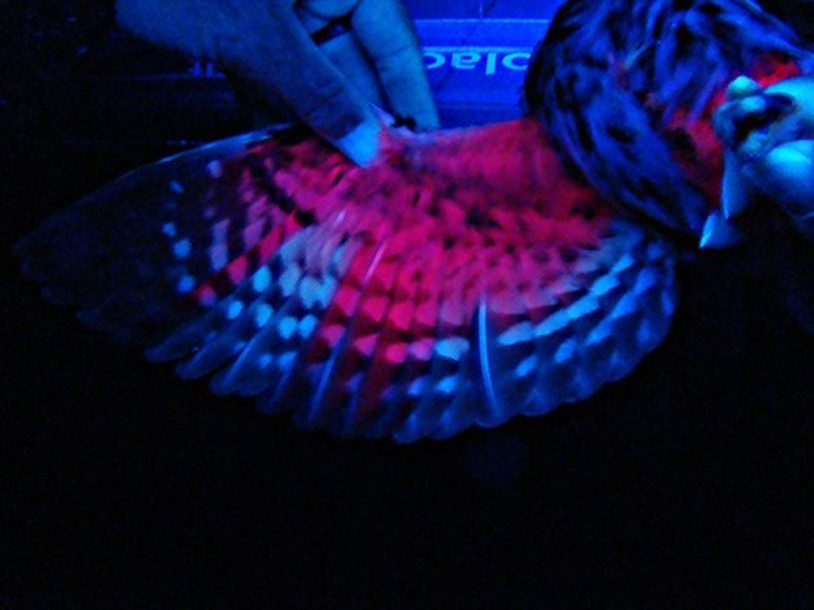 I will close by noting that these owls are predominantly residents of the boreal forest region during their nesting season. And, like some other residents of that region, they exhibit a marked population cycle, generally of 4-5 years. This is tied to the cyclic abundance of small mammals, their predominant food source. Last year (2020) was a peak year of the cycle, I captured 95 Saw-whets at my place that Fall. The previous year, with the same effort, I captured 16.