Since today is the anniversary of the bombing of Nagasaki, reader Joe Routon sent us some photos from the area. His captions are indented and you can enlarge his photos by clicking on them.

My Trip to Nagasaki

My father, a Marine lieutenant during WWII, was one of the first Americans to enter Nagasaki after the bombing of the city. He and other Marines, who were stationed there to help maintain order, lived in the Mitsubishi factory for several weeks, unknowingly absorbing harmful radiation. Fortunately, he lived to the age of 83, unlike many of his fellow soldiers who succumbed to cancer, caused by exposure.

It had long been a goal of mine to visit Nagasaki, so my wife and I planned a trip of several weeks to Japan.

On our train ride to Nagasaki, we passed through Hiroshima, site of the first atomic blast, on August 6, 1945. Gazing through the window at the buildings and the people walking the streets, I tried to imagine that day.

Our visit to Japan so far had included Tokyo, Nikko, Takayama, Kyoto, Nara, Himeji, and Kurashiki. We found the Japanese people to be unfailingly polite, helpful (one lady went out of her way for four blocks to guide us to our hotel), considerate of others, and welcoming to us American tourists.

Our day in Nagasaki began with a streetcar ride to Peace Park, at the epicenter of the atomic bombʼs explosion. We lingered for a few minutes at the wing-shaped fountain that was dedicated to the fatally wounded who begged for water.

Heading farther into the Park, we stopped to see statues and sculptures from all over the world that were donated to Nagasaki to memorialize the atomic bombing. We passed by the ruins of the concrete walls of a prison where 134 inmates had died instantly.

At the end of the Park is the Peace Statue: a seated man, 30 feet tall, with one hand pointing up in the direction from where the bomb had come and the other extending outward in a gesture of peace. 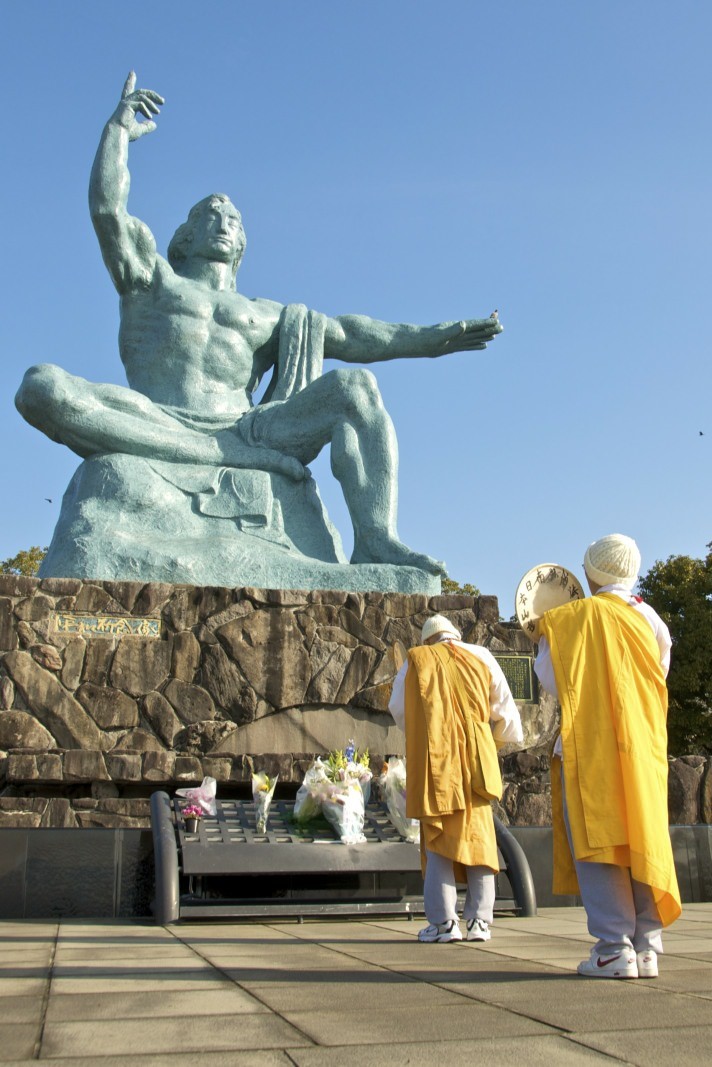 The statue, “Maiden of Peace,” was given to the Japanese people by China. 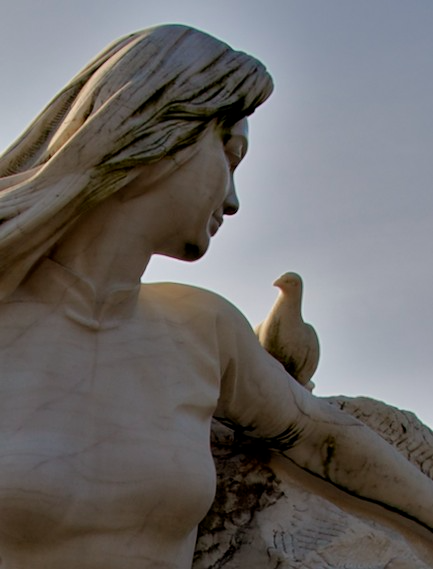 A few hundred yards away, the exact epicenter (the bomb exploded 1500 feet above) is marked with a black pillar placed in the center of concentric circles on the ground that signify the spreading waves of death. A black coffin in front of the pillar contains the nearly 150,000 names of all of the known victims of the fiery blast. 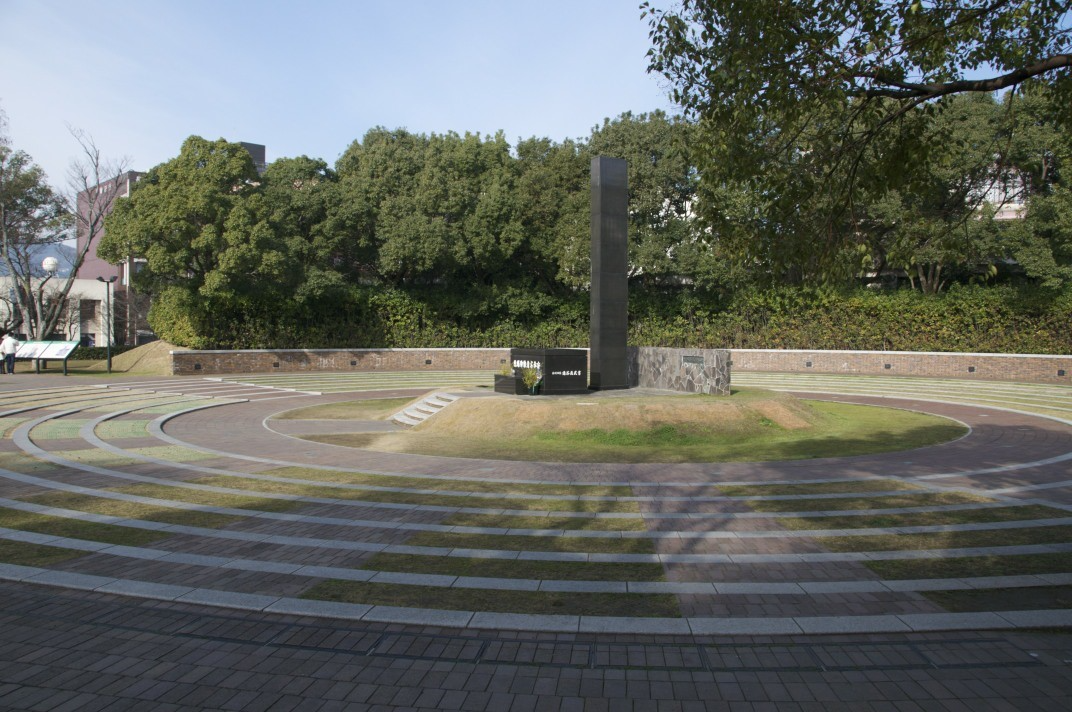 The Nagasaki Atomic Bomb Museum pulls no punches. Its photographs and videos of the city before and after the explosion are mind-numbing. Inside, the lighting grows dim and a clock can be heard ticking away the seconds until 11:02, when it abruptly stops. 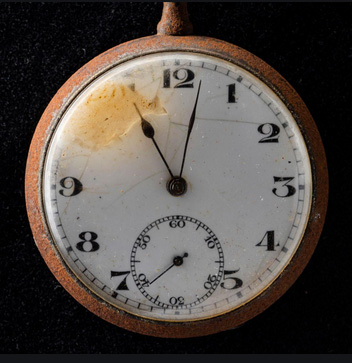 Displays show hand bones melded in the searing heat (7000 degrees F.) into a clump of melted glass, remnants of a personʼs skull inside a helmet, clothing exposed in the bombing, photographs of dead and dying victims, and video accounts by survivors.

Other exhibitions show damage caused by heat rays, by the force of the explosions, by fires, and by radiation. Viewing them is not a pleasant experience, but, like Auschwitz, it is something that should be seen by everyone.

Whether or not the bombing was justified, countless innocent lives, young and old, military and civilian, were lost; animal and plant life were destroyed. Visiting this museum is the closest you can come to comprehending the horrific magnitude of the death and destruction of atomic warfare. 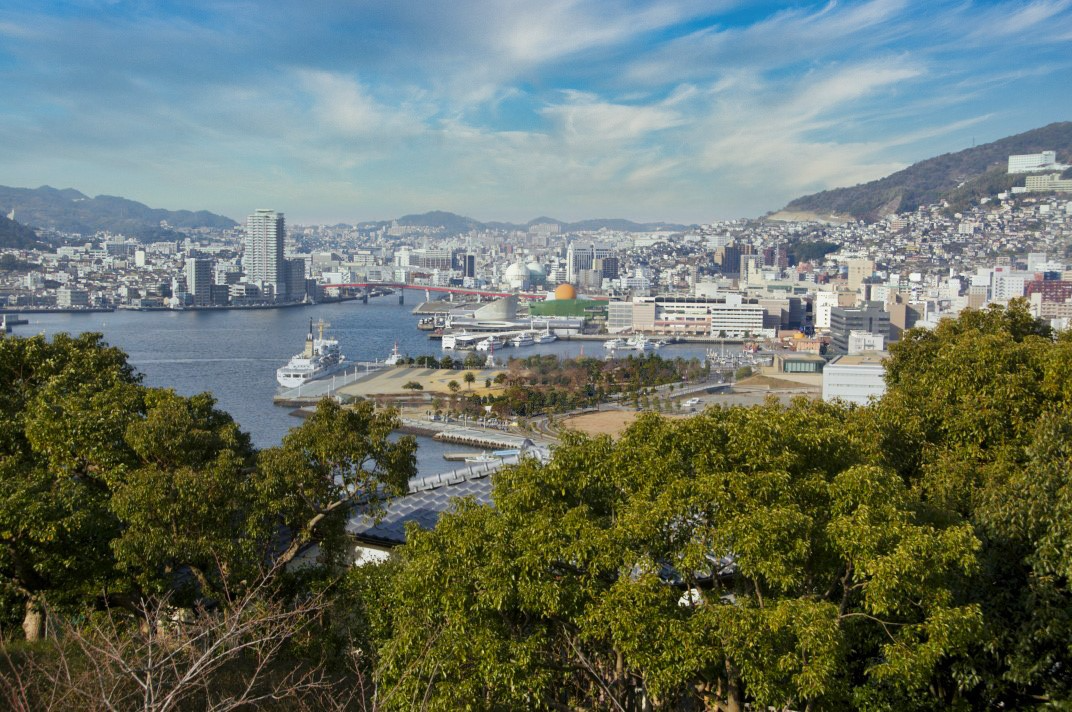 I came to Nagasaki and got a glimpse of what my father experienced 63 years ago. By connecting with history, I connected with him.