Here’s a pretty blatant violation of the First Amendment by Stanford University as reported by Slate. But to know how it’s a violation, you have to know two pieces of law. Click on the screenshot to read:

In short, a third-year student at Stanford Law School, Nicholas Wallace, decided to make fun of the conservative Federalist Society, some of whose members agreed with the January assault on the U.S. Capitol, by publishing some satire on a listserv:

The flyer promoted a fake event, “The Originalist Case for Inciting Insurrection,” ostensibly sponsored by the Stanford Federalist Society. It advertised the participation of two politicians who tried to overturn the 2020 election, Missouri Sen. Joshua Hawley and Texas Attorney General Ken Paxton. “Violent insurrection, also known as doing a coup, is a classical system of installing a government,” the flyer read, adding that insurrection “can be an effective approach to upholding the principle of limited government.”

Reader Paul found a screenshot of the flyer: 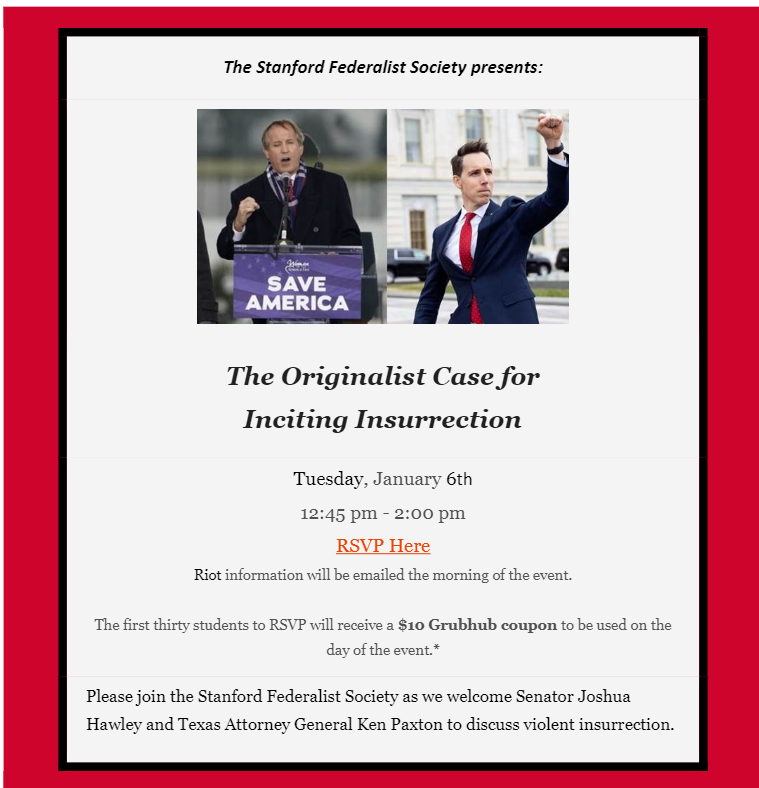 The Federalist society urged Stanford to formally investigate Wallace. When the school did, Stanford put a hold on Wallace’s degree and forbade him from graduating, asserting that Wallace may have violated the University’s code of conduct.  But Stanford, and especially its law school, should have realized two things, which apparently were caught by the estimable Foundation for Individual Rights in Education (FIRE), whose own statement is here.

On Tuesday, the Foundation for Individual Rights in Education sent a letter to Stanford urging the school to “immediately abandon its investigation and commit to procedural reforms to protect the expressive rights Stanford promises to its students.” FIRE pointed out that California’s Leonard Law requires private universities to comply with the First Amendment, and there is no real question that Wallace’s email is shielded by the First Amendment. The Supreme Court has held that satire, including offensive and hurtful expression, constitutes protected speech, and Wallace’s email is obviously satirical. “No reasonable person familiar with the email’s context would understand it to be sincere,” FIRE wrote, noting that it advertises an event that occurred 19 days earlier and is “laden with figurative language intended to impugn national political figures.”

(FIRE’s own statement is here.)

If you knew about the Leonard Law, and that satire is considered free expression, you’d realize that Stanford shouldn’t have even begun an investigation of permitted speech. Indeed, the Federalist Society itself promotes free speech on campus, so why is it doing this? Wallace suspects, correctly, I think, that this is pure retaliation.

But, as the NBC News ends every evening, “There’s good news tonight!”  Yesterday evening Slate updated the article with this:

Update, 9: 30 p.m.:  Stanford has concluded that Nicholas Wallace engaged in protected speech, dropped its investigation, and lifted the hold on his diploma. Wallace has confirmed that he will be allowed to graduate.

What’s especially ironic is that a left-wing school went after a student for making fun of a right-wing organization, all the while violating the freedom of speech that Stanford is required to adhere to.

20 thoughts on “Stanford University tries to block student from graduating for publishing a satirical post, fails on First Amendment grounds”