Well known author Blake Bailey‘s new biography of Philip Roth, which has received great reviews, has been pulled from sale by publisher W. W. Norton, though I notice it’s still on Amazon. If you still want to read it after you read this post, best to get it now, as the publisher, W. W. Norton, has decided to stop selling it.  The story can be read in the New York Times or, in shorter form, at the Washington Post Book Club page (click on the screenshots below): 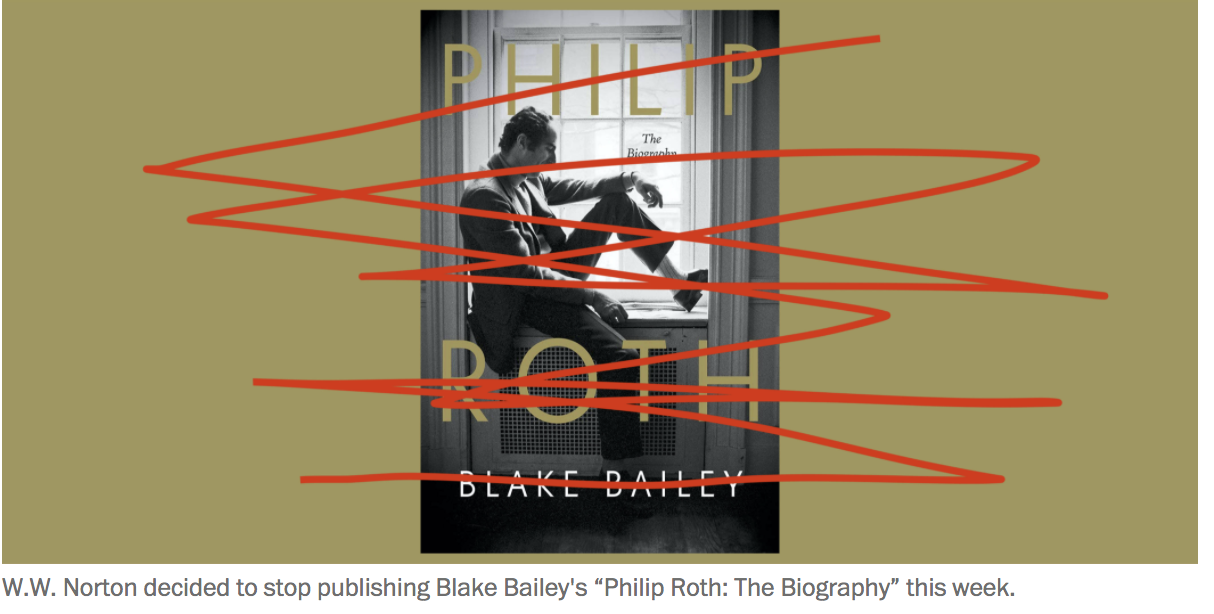 The explanation from the NYT:

Now, allegations against Mr. Bailey, 57, have emerged, including claims that he sexually assaulted two women, one as recently as 2015, and that he behaved inappropriately toward middle school students when he was a teacher in the 1990s.

His publisher, W.W. Norton, took swift and unusual action: It said on Wednesday that it had stopped shipments and promotion of his book. “These allegations are serious,” it said in a statement. “In light of them, we have decided to pause the shipping and promotion of ‘Philip Roth: The Biography’ pending any further information that may emerge.”

Norton, which initially printed 50,000 copies of the title, has stopped a 10,000-copy second printing that was scheduled to arrive in early May. It has also halted advertising and media outreach, and events that Norton arranged to promote the book are being canceled. The pullback from the publisher came just days after Mr. Bailey’s literary agency, The Story Factory, said it had dropped him as a client.

Bailey denies the allegations, calling them “categorically false and libelous”. One of them is a flat-out rape accusation, the others involve him “grooming” or behaving inappropriately towards middle school students.

Now normally I would say that accusations alone are not sufficient to warrant this step: there must be either a conviction or convincing evidence. The presumption of innocence still applies. And, after all, publishers all have a “morals clause” in their contract that allow them to extricate themselves if an author is guilty of gross transgressions, even if not criminally convicted.  But absent a conviction, I’d normally say, “it’s not time to pulp the book yet.”

There does seem to be something more here than a mere accusation. One involves an email that Bailey sent to Eve Peyton, the woman who accused him of rape when she was a graduate student at another school. And this doesn’t look good for Bailey:

In an email reviewed by The Times, Mr. Bailey apologized to Ms. Peyton for his behavior days after the encounter, and asked her not to speak to others about it. She last heard from him in the summer of 2020, when Mr. Bailey wrote her again, in a message also reviewed by The Times, in which he alluded to “the awfulness on that night 17 years ago” and said he was suffering from mental illness at the time.

If I saw that email, and I take the Times‘s word for its authenticity, that would be enough for me, for it’s a tacit admission of guilt. A conviction isn’t needed if there’s an admission.

In the end, then, I don’t see this as censorship based on a mere accusation, but a fairly credible accusation, and I think Norton did the right thing. (They’ve also said they’ve paused selling the book, leaving open the door that if he were exculpated, sales would resume.)

Others may disagree with me and argue that even the worst criminal’s book should be published if it contains something in it worth reading. There is, after all Mein Kampf, by one of the worst mass murderers in history (granted, Hitler doesn’t get royalties, but the book also provides an insight into a historical figure). Likewise, Bailey’s book is supposed to be a good account of Roth’s life and work. Should it be removed from sale because of the author’s criminality?  Surely the author should not be allowed to profit from his work if he did indeed do what he’s accused of, just as O. J. Simpson cannot profit from his creepy book If I Did It, for the proceeds go by law to the Goldman family.

Upshot: I would do what W. W. Norton did, but there should be some way to make Bailey’s work available to scholars and the public if he’s found to be guilty or is credibly guilty. I can’t envision scholarship being “disappeared” completely.