I know virtually nothing about Tablet, but they’ve done what looks to me like some good reporting over the past few years, including the revelations about anti-Semitism among the leaders of the original Women’s March. I don’t know anything about its political stand, if it has one—only that they usually (but not always) write about things of specific interest to Jewish people. Bari Weiss used to write for them.

I just looked up the short Wikipedia article on Tablet, and while it says nothing about its politics, it did reveal two other pieces of reporting that had substantial effects:

In 2012, questions by Michael C. Moynihan, writing for Tablet, led to Jonah Lehrer’s resignation from The New Yorker: Lehrer had invented and cobbled together quotes attributed to Bob Dylan for his book, Imagine: How Creativity Works.

In 2017, Tablet hired Gretchen Rachel Hammond, a Chicago journalist fired from her job at Windy City Times after breaking the news of Jewish activists being expelled from the Chicago Dyke March.

I’ve written about both of those issues; the Lehrer exposé pretty much discredited him for good, as his plagiarism and propensity for fabrication were widespread beyond the Dylan thing.

Here’s another Tablet article that looks pretty substantial, and it’s about what I call the “diversity racket”—the lucrative business of selling “diversity and inclusion training” to public schools and colleges. That business is not only lucrative, but, sadly, ineffectual, as author Sean Cooper reveals. And it’s also invidious in how it goes about “training” people.

Cooper also profiles two programs, “Roses in Concrete”(an ethnic studies program) and “Pollyanna” (a diversity training company), but I’ll leave the details for your own perusal. Do realize that diversity training is connected to ethnic studies, as implementing the latter is almost an inevitable result of implementing the former. And often the same people, both teachers and administrators, promote both. I’ll mostly discuss the training, but have a few words on curriculum: 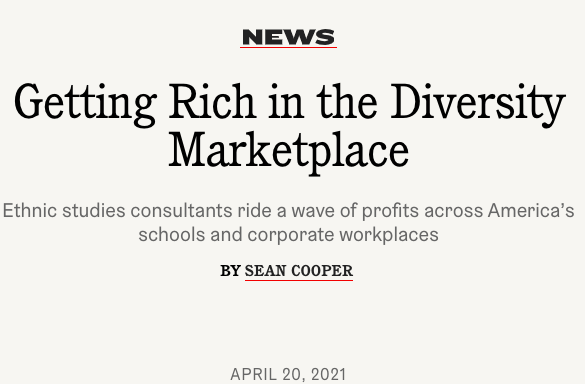 I’ll just give their (and my) take on a few of the questions involved. Quotes from the article are indented.

a.) Do we need such training? If there are problems in schools or the workplace caused by racism, then something needs to be done about it. The problem is that what is being done about it is what you might expect: selling a narrative of oppressors vs. the oppressed, unconscious racism, the identification of one’s persona with one’s race and pigmentation, and the pervasiveness of systemic racism: in other words, the essence of Critical Race Theory. And, as the article emphasizes, it not only fails to work, but makes the problem worse. It’s above my pay grade to answer this first question myself, but if there were non-divisive ways to quash bigotry, it would be worth investigating them. Do teachers and students need that kind of training? That’s a different question.

b.) What does it cost? As you might expect based on the ginormous fees charged by people like Ibram Kendi and Robin DiAngelo for a single talk, diversity training is expensive. Remember, it’s done by private consultants who make a living from it.  Here are details from one program:

Soon, according to pricing documents obtained by Tablet, Pollyanna was charging upwards of $1,750 per hour to schools that contractually committed to “incorporate racial literacy content in the classroom,” $6,000 for a half-day presentation on how to bring administrators up to speed on the basics of anti-racism, and $21,000 plus travel expenses for a three-day Internal Curriculum Review and Development for schools exploring the possibility of implementing a full-scale DEI overhaul of their entire administrative and classroom playbooks.

Here’s a program run by an ethnic-studies professor at San Francisco State:

Professor Tintiangco-Cubales herself co-runs a consultancy called Community Responsive Education Corp., which billed $11,000 for teacher training at Poway Unified School District, $65,000 for a keynote address and a professional development workshop series for the leadership team of Chula Vista Elementary, and $40,000 “to facilitate the development of Ethnic Studies units and lessons” at the Jefferson Elementary School District, south of San Francisco. Tintiangco-Cubales, who did not respond to Tablet’s request to discuss her consultancy, works outside California as well, notably as a lead trainer for a Boston consortium of educators in a project funded, in part, by Peter Buffett’s NoVo Foundation.

c.) How does it work? The report from Tablet describes one curriculum for students that’s especially invidious, but I suspect most of them use boilerplate CRT stuff. This report, however, angered me:

The Racial Literacy Curriculum begins in kindergarten with 5- and 6-year-olds using Pantone Color Charts to match their skin tone so that they might start to see themselves and one another by skin color. “Recognizing and categorizing color is a foundational skill for early grades, and will be used as a platform for upcoming lessons that discuss skin color.”

This curriculum includes a unique view of nearly every educational discipline, such as in sixth grade history where children discover that the essence of Nazism was not the destruction of European Jewry but the rise of “whiteness.” Pollyanna’s main coverage of the Jewish experience is reduced to an odd and passing reference to the “Eastern European Hebrew” race.

By eighth grade, the curriculum’s goal is to create “social justice” action plans that address how “systemic racism provided social, economic, political, and legal advantages to White Americans.” Students devise plans and launch campaigns that seek to overturn white privilege in the “community or city of the student body, or may reach broader, such as to the national level and beyond.”

Color charts to see how much of a “person of color” you are?  Right off the bat–in kindergarten–students learn to self-classify BY PIGMENT. And if you look up California’s proposed Ethnic Studies curriculum, it’s largely along these lines as well, though there don’t seem to be pigment charts.

The Tablet article goes into some detail about both of these, and the answer is the same for both: NOPE. While some promoters of the programs claim they work, examination by both Tablet and outside academic reviewers say otherwise.  Here’s for workplace training:

Workplace DEI practices, on the other hand, have been studied by a variety of researchers, who have found, perhaps unsurprisingly, that employees who spend their mornings in a conference room calling each other racist and oppressive often struggle to return to work as colleagues.

Indeed, rather than reducing bias, improving morale, increasing opportunity for minority groups, or boosting productivity and workplace satisfaction, DEI training initiatives are frequently ineffective and, despite intentions, counterproductive. A growing body of quantitative research has shown that DEI training can make workplaces more biased, atomized, discriminatory, and hostile, even or especially for the very minority groups it’s intended to help.

One group of researchers from Arizona State University and Columbia University investigated the efficacy of bias-reduction training and found that after workplace hiring managers were taught to combat various stereotypes, they were more likely to apply those stereotypes in hiring practices. Another recent study determined that “white privilege” training increased hostility towards a variety of groups, including a significant decrease in sympathy for the plight of “poor white people,” as they had failed to properly leverage their inherent privilege. A 2018 experiment concluded that exposure to DEI practices strengthened stereotypical views, concluding that “well-intentioned efforts to portray the value of differences may reinforce the belief that fixed, biological characteristics underpin them.”

DEI may also be enflaming gender tensions. Another review of corporate workplaces found that female employees “were less supportive of sexism litigation when the company offered diversity training,” because the training itself increased the false belief that the workplace had become less biased.

Ethnic studies programs seem to be equally ineffective in improving student performance, though one could argue that improvement in performance is not their goal. (I would claim that they should boost performance by improving morale and academic climate.) Regardless, there are several programs that have been ditched by school systems because they’re either ineffective or detrimental in helping students do better academically. Here’s one:

Incubated at San Francisco State’s Ethnic Studies Lab, the Roses in Concrete project began piloting a new K-8 ethnic studies curriculum implemented by the Oakland School Board in its district in 2015. But in 2019, when Duncan-Andrade’s top deputies appeared before the school board on the matter of a charter renewal for Roses in Concrete, the district staff explained to the board that Roses in Concrete should not receive a three-year contract renewal because of the continued occurrence of “significant negative outcomes.” In the final year of the curriculum, in fact, 88% of students failed to demonstrate proficiency on California English exams, a number eclipsed by the 98% of students who failed to pass the proficiency threshold for math. The new program had also sent families fleeing, with more than 100 students leaving before the 2018 academic year.

e.) If the programs are expensive and don’t work, why are they proliferating? You know the answer as well as I. Given the Zeitgeist and the pervasiveness of Wokeism in schools, schools have to look like they’re doing something, that they’re tackling the problem.  Hiring companies to train your students is an investment you can point to: “We’re spending money getting reputable companies to help us become diverse and inclusive.”

And, as Kurt Vonnegut said, “So it goes.”

19 thoughts on “The diversity training racket”