As I wrote yesterday, the American Humanist Association (AHA), interpreting some of Richard Dawkins’s tweets as “transphobic”, revoked his Humanist of the Year Award from 1996, saying that he “demeaned marginalized individuals,” both transsexual and black (the AHA’s statement is here).  And as I said, I think this “cancellation” was a mistake. Though the AHA has a right to do what they want, I disagree that Dawkins’s statements have been either transphobic or racist.

Apparently Rebecca Goldstein and Steve Pinker do, too. In a tweet from Steve yesterday, the pair, who had separately received Humanist of the Year Awards, objected strongly to what the AHA did. I’ll reproduce their letter as screenshots: 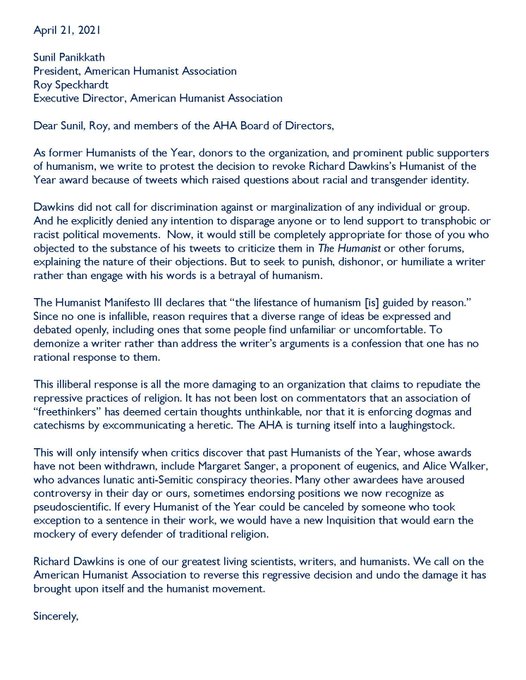 It’s hard to take issue with what Rebecca and Steve say. The penultimate paragraph of their letter, “This will only intensify. . . “, is especially good.

And crikey, while I knew that the anti-Semite Alice Walker had gotten the same award, I didn’t know that Margaret Sanger had as well. She’s been accused of racism and eugenics by the group she founded, Planned Parenthood, which is in the process of cancelling her. (See this response from a biographer of Sanger.)

You can see the list of Humanist of the Year Awards here, and I already spotted several that would, by Woke standards, now be seen as “problematic.”

I won’t adjudicate the Sanger debate, but it’s clear that Walker was anti-Semitic and has made clear statements to that effect. If a case for bigotry is to be made against award recipients, that against Walker is far clear than any case against Dawkins. The AHA, if it’s to be consistent, should take away Walker’s award immediately. Or, better yet, stop this Pecksniffery.

I doubt that the AHA will restore the award, but if they read what Dawkins actually said, and abided by their own dictates, they should give it back. They have indeed turned themselves into a laughingstock.