The New York Times has a long interview with astrophysicist Neil deGrasse Tyson about many things, but the main topic is how to revive what’s seen as waning public interest in science as well as distrust of science. Click on the screenshot to read it:

Perhaps unsurprisingly, given that this is the NYT, a lot of the interview is about two claims of sexual misconduct made against Tyson a few years ago. As the article notes, these claims were investigated by three bodies: the American Museum of Natural History, where Tyson works, and National Geographic and Fox News (the latter two air his shows); and there was no finding of misconduct. Yet the NYT brings it up in the first paragraph, and then later on asks him several questions that have nothing to do with science, questions that Tyson deftly deflects. Before we get to the science, here are the questions (note that the link doesn’t seem to work)

Tyson answers them (or rather circumvents them), but what do they have to do with the topic of the interview? Given that he was exculpated, it’s time to leave the guy alone about this stuff.

There are other questions about the search for extraterrestrial life, the connection between relativity and quantum mechanics, and the way to popularize science—the main point of the interview.

So is the public really mistrustful of science or scientists? A Pew Poll from last year says “no, not really”, for public confidence in the ability of scientists to act in the public interest rose in the four years between 2016 and 2019 and it’s high. In fact, the only group that inspires more confidence are K-12 school principals (politicians are especially low!): 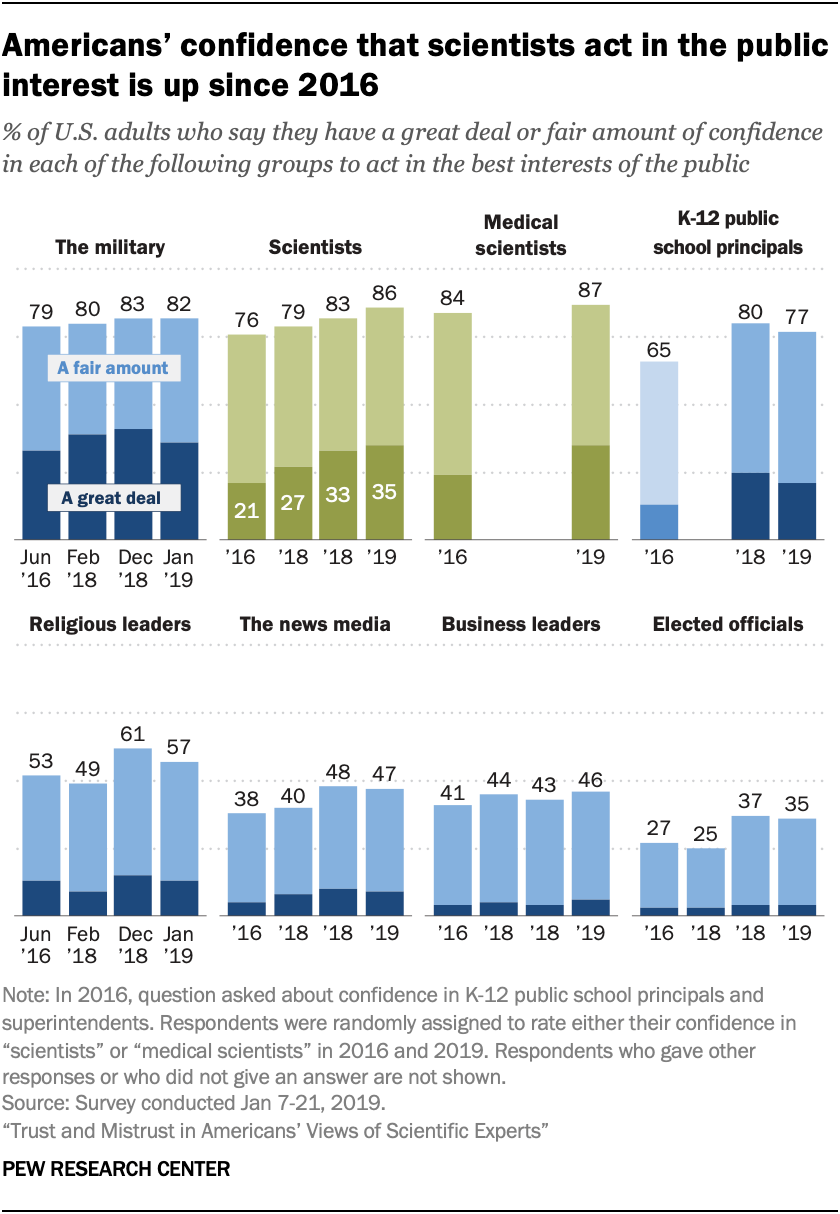 Now this was before the pandemic hit, so the data may differ now. And we’re surely aware that the public is suspicious of vaccines, which I suppose reflects a lack of confidence not in medical scientists, but in public health officials. Further, most people are taking their shots, which shows a pretty remarkable confidence in science given that the vaccines were developed over a couple of weeks before they were tested.

I don’t perceive a public distrust of science so much as a public lack of interest in science. No matter how many Tysons, Sagans, and Dawkinses you throw at the public, some people will just never get turned on. And there’s no way to force them to be. People’s interests differ. Nevertheless, the three names I’ve just mentioned show that although we can’t get everyone on board with science, there is a latent interest out there that can be switched on.

How should we do that? There are a number of ways (my view is that each scientists should do outreach the best way they know how), but Tyson has a more definitive answer, which he imparts in this exchange (interviewers statement is in bold, Tyson’s response in regular type):

. . . Once you’ve come up knowing the science and how and why it works and understanding what the bleeding edge of science does, you’re in a position to pass judgment on science-related news. Now, on top of that, if there’s anything we would call a scientific authority, it is the National Academy of Sciences. Most people don’t even know that the frickin’ thing exists. Why is that? We need better marketing.

What would be the mechanism for that? I’ll go pie in the sky: a mission to Mars with humans. That would do it. Why do I know that? Because in the 1960s, while we’re going to the moon, you didn’t need special programs to get people interested in science and engineering. It was writ large in the daily headlines because every mission was more ambitious than the previous mission. This went higher, this orbited longer, now we’re docking, now we’re going to launch the craft that’s going to the moon, now we go to the moon. And you knew it was fluency in science and technology that was empowering that journey. So a mission to Mars with humans, I could script this: We’re going to do this in the year 2035. It’s 14 years from now, and we want the crew to be in their upper 20s in age, which means that right now that crew is in middle school. Let us do another Mercury 7 except we’re going to find the middle-schoolers who we are going to track, and Teen Beat is going to say, “How were your grades? Are you doing all the right things? Are you studying?” They become models for society without having to take out an ad. They go to Mars! By the way, for this you also need biologists, medical doctors, engineers, astrophysicists, chemists, geologists. You tickle all the STEM fields, and everybody is going to want to be a part of that, and science would reign supreme once again.

Yes, that is pie in the sky! First of all, a mission to Mars with humans, though it will undoubtedly pique public interest, will be not only expensive, but also dangerous.  And it will take seven months each way. The possibility of a disaster seems to me quite high. What we see here is what would get Tyson turned on, but not necessarily people like me.

But will a Mars mission really inspire interest in science—even over the long 14 years that Tyson says it would take to launch the mission? I don’t think so. Moreover, will it inspire the kind of interest in science that I would like to see: interest in the wonders of life and of evolution? (We each have our own fiefdom.) I don’t see how, even if Tyson says “you need biologists, chemists, and so on” to be part of a mission to Mars.

The fact that interest in evolution has been dialed up so high by Richard Dawkins, for instance, shows that you don’t need missions to Mars to get people excited about science. You just need a communicator with the knowledge, the eloquence, and the charisma to show people what excites us scientists without being condescending towards the public. In the past, those people have been largely physicists: people like Tyson, Sagan, or Feynman. But they needn’t be. The only prescription I’ll issue for exciting public interest in science is for scientists to stop considering outreach as an inferior activity. After all, it’s the public who funds our research, and why shouldn’t those of us who can help pay them back by telling them where their bucks went, and why?

Your turn. What turned you on to science? Are there things we should be doing to awaken interest in the field, but are not doing? Weigh in below.