I’m not sure whether Sullivan’s content is free, but I subscribe, and I’m going to subscribe to John McWhorter’s site as well, which you can still sample for free. Here is your Saturday reading, with excerpts (click on screenshots): 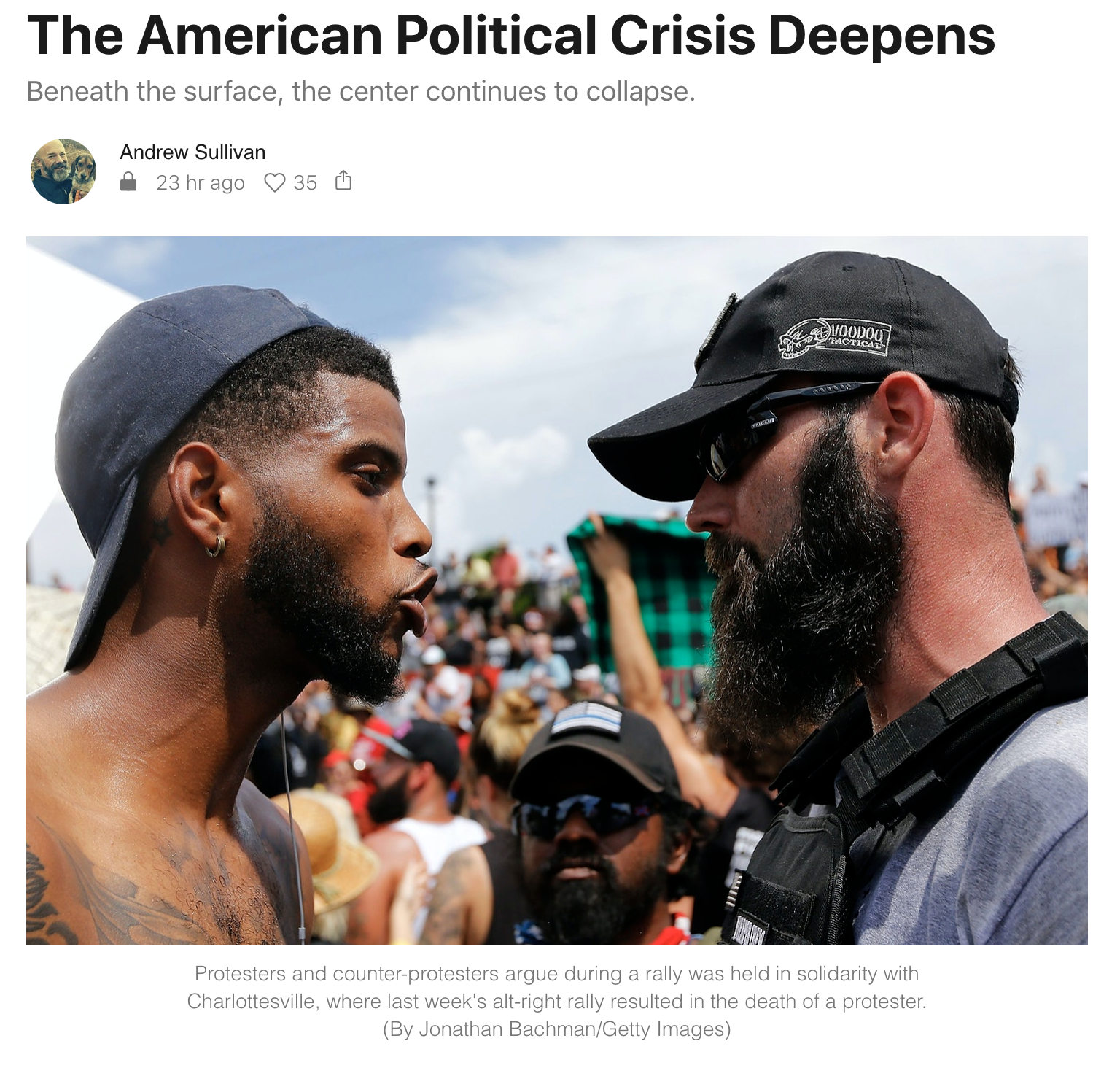 His message is, as the subtitle notes, “the center continues to collapse”.

Jokers to the Right of me:

. . . . the sole focus of the GOP since last November has been voter fraud. State after state has been tightening restrictions to trim the electorate. Not all of this is malign — as you can see in the Georgia case, which is more complex and less outrageous than the MSM/Democrats want you to believe. But it would be terribly naive not to see this as a clear attempt to minimize the clout of minority voters, whom the GOP (despite the trend of 2020) assumes will always vote Democrat. Meanwhile, the cult of Trump remains — and no one rivals him.

Worse, there are plenty of signs that the GOP is also laying the foundations for a much more serious anti-democratic maneuver next time. Check out this typically sharp piece by Jonathan Last. What he shows is that the bulk of the post-election GOP autopsy has not been about policy changes to adapt to a changing electorate, or how to capitalize and enhance Trump’s gains among minority voters, or even how to strategize to maximize Republican advantage in the Electoral College. Part of the strategy has been about how to replicate Trump’s attempt to reverse the legitimate results of 2020 by transparently anti-democratic means.

Check out this HB 2720 bill in Arizona. Money quote: “The Legislature retains its legislative authority regarding the office of presidential elector and by majority vote at any time before the presidential inauguration may revoke the Secretary of State’s issuance or certification of a presidential elector’s certificate of election.” It’s a sign that GOP-controlled state legislatures have an option to invalidate election results in the future if a Democrat is elected president, likely prompting a constitutional crisis.

Clowns to my Left:

A similar procedural dynamic has taken hold among Democrats. Yesterday, some legislators unveiled their plan to add four seats to the court so they can immediately control it. It’s the most ambitious court-packing scheme since FDR, and comes at a time when the Dems also narrowly control both Houses of Congress and the presidency. It’s not Pelosi’s desire or interest at this point, but it shows where we’re headed. The Dems say, of course, that they’re just responding to McConnell’s breach of decorum and decency when he refused to allow a hearing for Obama’s last nominee, Merrick Garland, and for his rushing through the Kavanaugh and Coney-Barrett nominations. And yes, they are. And the Dems are right. But can’t we see how this escalating tit-for-tat can destroy liberal democratic norms and procedures by ratchet effect?

Many Dems also want to abolish the filibuster to push through big legislation quickly in the Senate, via Vice President Harris’s tie-breaking vote. They have decided not to try for any serious bipartisanship on the stimulus, and to pursue some big policy changes through reconciliation. Not just that, they also want to add states to the Union, thereby guaranteeing a durable Democratic majority in the Electoral College and Senate for the foreseeable future. I understand the frustration at how our system provides a structural advantage for low-density states — but I see that as a feature of American constitutional balance, rather than an anti-democratic bug. But put aside short-term justifications for any one of these measures, and take all these maneuvers together, and you can see how any temporarily losing ruling party in an eroding democracy tries to shift constitutional norms to entrench power as permanently as possible — and not simply by winning elections in the existing system.

And he concludes, as usual, that there’s not much hope for ameliorating tribalism.

And Dr. McWhorter, who says things only a black man could get away with. Here he draws a parallel between accepting Darwinism and accepting evidence that murders by cops aren’t racially biased, though he notes that cops are “nastier” to black people than to whites (evidence shows clearly that blacks get stopped by cops on a per capita basis more often than are whites, and are subject to nonlethal force more often than whites). But that apparently doesn’t go for lethal force. Read the following (it’s free and advertised on McWhorter’s Twitter feed. I’m not sure how apposite it is to compare acceptance of evolution with acceptance of data on cops’ use of lethal force, but McWhorter’s making the point that one can’t argue with facts:

An except, with a link to the data:

Whenever the national media reports on a black person killed by cops, we must ask ourselves “Would a white cop not have done that if the person were white?”

Because: we are taught that white (and even non-white) cops ice black people (usually men) out of racism. It’s possibly subconscious, but in the heat of the moment, they revert animalistically to their white supremacist assumption of black animality and pull that trigger.

This is why so many can only bristle at the idea that George Floyd did not die because he was black.

It’s why now, when the cop who killed Daunte Wright not only says she mistook her gun for a taser, and is even recorded as having done so, legions of people still insist on parsing it as evidence of “racism.” The idea is, I suppose, that she wouldn’t have made that mistake, would have been more prudent, if Daunte Wright was instead a white guy named Donald White.

. . . Here is why we need that mental exercise. Tony Timpa was quite white and was killed quite in the way that Floyd was, including it being recorded.

AND white people have been killed when cops mistook their guns for tasers. I wonder why no one ever heard about this one beyond one day in Philadelphia? (Wait – there will be objection that the shot didn’t actually kill this guy. But that’s random – it could have, easily.) There are many others — there has been media coverage this week of cases where cops made the mistake that Officer Potter did towards Daunte Wright (where the person shot died). You can be quite sure that if their authors had found that the mistake only happened when the victims were black, we’d know by now.

This is a dog that didn’t bark and for a reason – that this week’s headlines have not been about how cops only mistake their guns for tasers when they are dealing with a black man is because … wait for it … they don’t! I suggest you take a little time and do a quick search on the cases listed by media articles like this. When the victim is black, it’s noted – big surprise – and quite often, the victim simply is not. By that I mean that often the victim was white. The journalists seeking to show that cops only mistake guns for tasers when they are confronted with a black person couldn’t find it and thus just write that officers have sometimes been “confused” while studiously leaving race out of it. Their head editors have made sure they did.

The problem is the sheer volume of the white cases. We just don’t hear about them. As I write, what about Hannah Williams? Or this hideous case? No, I’m not laboriously smoking these cases out when they are just weird exceptions to a general rule. They are the norm. It’s just that they don’t make national news. It really is that simple, and that sad, and that destructive to our national conversation about race.

Funny thing – nothing makes this clearer than the Washington Post database of cop murders. Just pour a cup of coffee and look at what it shows, month after month, year after year. As South Park’s Cartman would put it, “Just, like, just, just look at it. Just look at it.”

Yet, the enlightened take on the issue serenely sails along as if that database proves that cops ice black men regularly while white men only end up their line of fire now and then by accident. Wesley Lowery ended his iconic piece in the Washington Post on cops killing black men with going off to vomit after hearing of the latest example, as if the database showed mostly this, and it was roughly 1880 in Mississippi. But that, I hate to say, was fake. The data justify no such vomiting – at least if the vomiting is about racism. The database reveals a serious problem with cops and murder, period, quite race-neutrally.

McWhorter is right: this kind of jumping the gun (pardon the metaphor) is destructive to our national conversation about race and destructive of racial amity.  This week we saw a Chicago cop kill Adam Toledo, a 13-year-old carrying a gun (which Toledo had fired a few times just before) whom the cop chased down an alley. The shooting was very quick; the cop told the kid to drop his weapon and show his hands, and when the kid apparently threw the weapon behind a fence and then turned to face the cop with his hands up, the cop fired. The whole thing took less than a second, and it’s hard to put myself into the cop’s place. There will of course be an investigation.

But one thing it’s impossible to tell is the race of the Toledo, for it was dark and he was running away. While it’s hard to tell whether the police shooting was justified as it happened so fast, it’s impossible to credibly assert that Toledo, a Latino, was killed because of his race. Yet our own Provost issued this statement:

Today brought the public release of a video showing the tragic shooting death of 13-year-old Adam Toledo by a Chicago Police Department officer. This comes as our nation is confronting too many painful incidents of bias and violence. We share the distress of people in the University community and across our city and nation concerning these issues.

The University extends its support as our community faces the aftermath of this tragedy, as well as other national developments such as the recent killing of Daunte Wright of Minnesota and the upcoming verdict in the trial of Derek Chauvin for the death of George Floyd.

While the Provost didn’t outright say that Toledo’s death is the result of “bias,” she clearly lumps it with the accusations of other bias murders. But in none of these cases, especially Toledo’s, has there been a definitive determination that racial bias helped foment the killing—the exact topic of McWhorter’s piece.  All these statements do is throw oil on the fire, implying to our Hispanic students, faculty, and staff, that bias is behind all these murders. This is divisive, unwarranted, and unseemly, especially in a University devoted to the pursuit of truth.

73 thoughts on “Two Saturday Substacks to read: McWhorter and Sullivan”