Below are two videos (there are more) about a 76 year old retired bricklayer from Brazil and the penguin who regularly visits him. The bird is a Magellanic penguin (Spheniscus magellanicus) named Din Din, and the bricklayer is João Pereira de Souza, who lives on a small island near Rio.  Ten years ago de Souza saved Din Din’s life when he found the struggling bird covered with oil on the rocks. Now the bird apparently visits Joāo every year, though it’s not clear where Din Din goes in the interim.

The story is told in full at ADAPT, which includes this:

“He stayed with me for 11 months and then, just after he changed his coat with new feathers, he disappeared,” Joao recalls.

The little guy wasn’t gone long though and just a few months later, he was back at the same beach. He spotted Joao fishing and followed him home, staying with him for the rest of the year.

Amazingly, this cycle has continued over the past five years [this was written in 2016]; each year Din Din spends approximately eight months with Joao and is believed to spend the rest of the time breeding on the Patagonia coasts of Argentina and Chile.

Well, this may be misreporting, as I find it unlikely that the bird takes the route below, traveling to Patagonia to breed; another scientist also thinks the bird stays off the coast of Brazil. Don’t believe stories (which are everywhere) that we know that Din Din travels so far every year to see his pal. 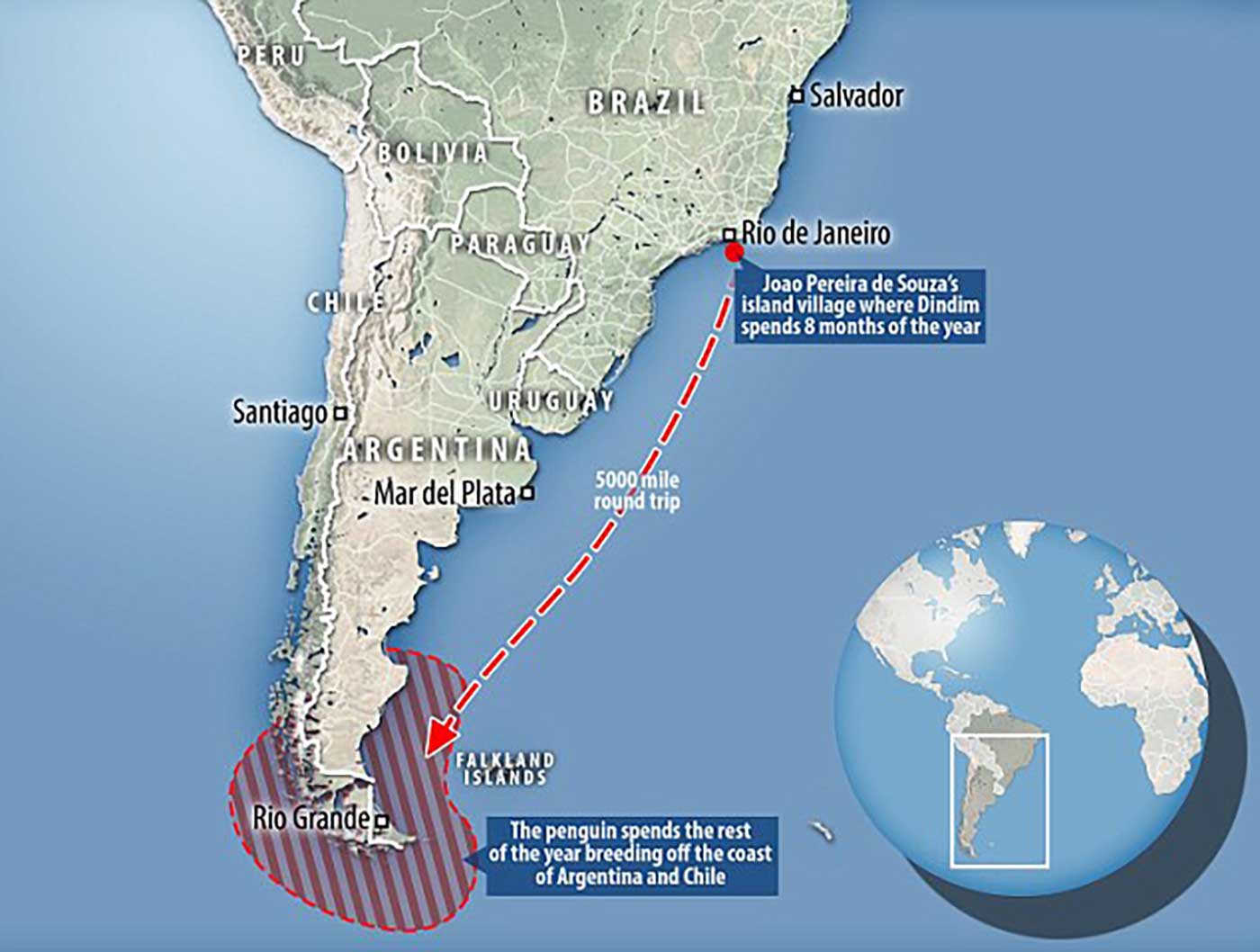 “I love the penguin like it’s my own child and I believe the penguin loves me,” Joao told Globo TV. “No one else is allowed to touch him. He pecks them if they do. He lays on my lap, lets me give him showers, allows me to feed him sardines and to pick him up.

“Everyone said he wouldn’t return but he has been coming back to visit me for the past five years. He arrives in June and leaves to go home in February and every year he becomes more affectionate as he appears even happier to see me.”

Professor Krajewski, a biologist who interviewed the fisherman for Globo TV, told The Independent: “I have never seen anything like this before. I think the penguin believes Joao is part of his family and probably a penguin as well. When he sees him he wags his tail like a dog and honks with delight.”

Here are the videos:

I can’t find much about Din Din after 2016, so I’m not sure if this grand reunion is still going on. Wikipedia notes that Magellanic penguins can live up to 25 years in the wild, though.