Bari Weiss has a guest writer on her Substack site Common Sense this week: high-school math and philosophy teacher Paul Rossi from Grace Church School in Manhattan, a coeducational private college-prep school that serves students from kindergarten through 12th grade. His topic is the antiracist training he’s required to take, but abhors as harmful, divisive, and above all stifling to students’ ability to think freely and explore ideas. Rossi, still employed at the school, recognizes that by writing this he’s “risking not only my current job but my career as an educator, since most schools, both public and private, are now captive to this backward ideology.” He’s the Jodi Shaw of Grace Church School, and I worry that he’ll suffer the same fate as Shaw: a resignation that’s more or less forced, or, alternatively, outright expulsion if he refuses to sign the school’s agreement that they cooked up for him. 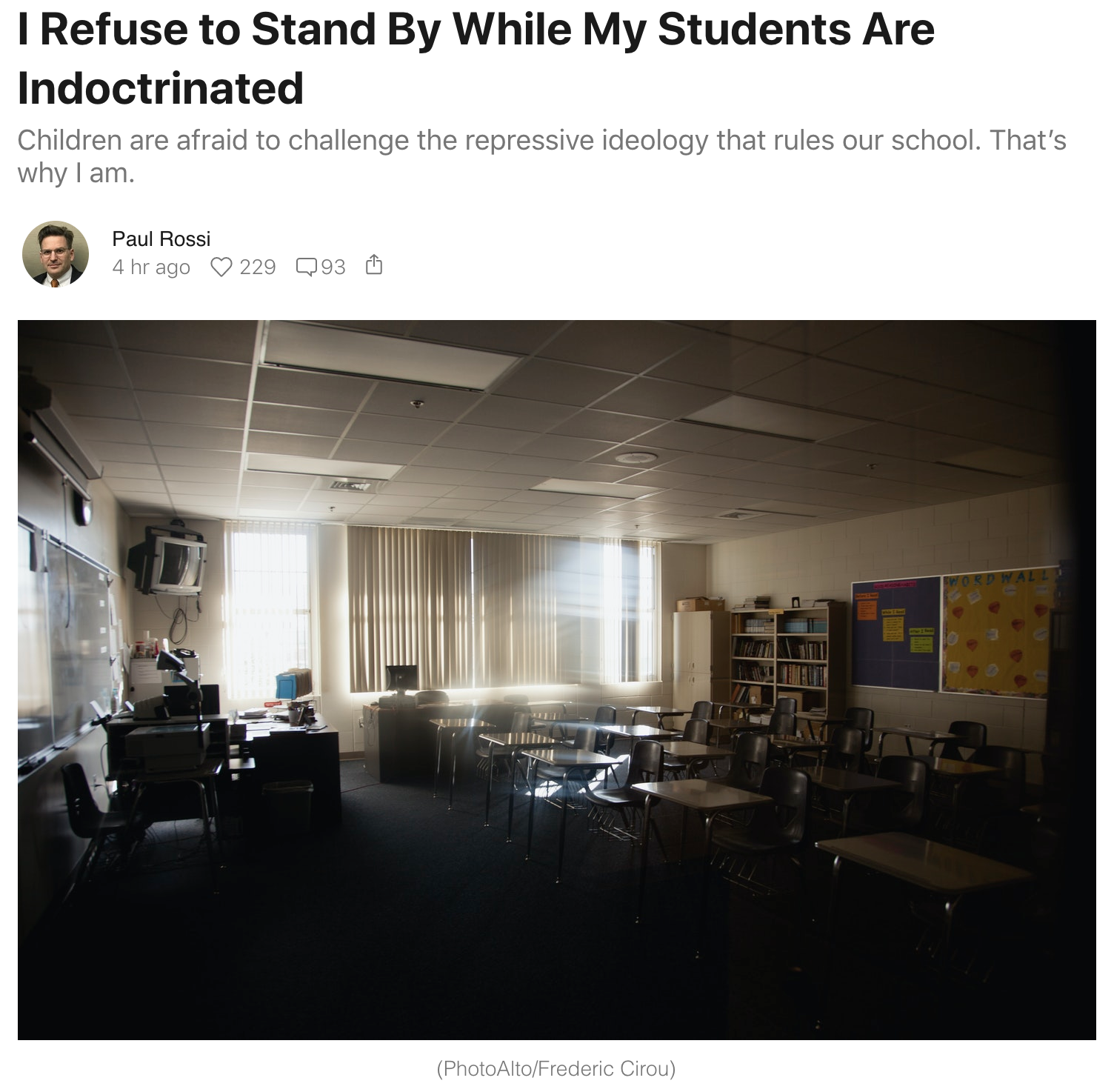 Rossi says he’s more or less forced to “treat students differently on the basis of race” and to discuss their dissents not with other faculty, but with a special “Office of Community Engagement,” which always bats away his objections.  A longish excerpt (read more at Bari’s site) serves to show the problem:

Recently, I raised questions about this ideology at a mandatory, whites-only student and faculty Zoom meeting. (Such racially segregated sessions are now commonplace at my school.) It was a bait-and-switch “self-care” seminar that labelled “objectivity,” “individualism,” “fear of open conflict,” and even “a right to comfort” as characteristics of white supremacy. I doubted that these human attributes — many of them virtues reframed as vices — should be racialized in this way. In the Zoom chat, I also questioned whether one must define oneself in terms of a racial identity at all. My goal was to model for students that they should feel safe to question ideological assertions if they felt moved to do so.

It seemed like my questions broke the ice. Students and even a few teachers offered a broad range of questions and observations. Many students said it was a more productive and substantive discussion than they expected.

However, when my questions were shared outside this forum, violating the school norm of confidentiality, I was informed by the head of the high school that my philosophical challenges had caused “harm” to students, given that these topics were “life and death matters, about people’s flesh and blood and bone.” I was reprimanded for “acting like an independent agent of a set of principles or ideas or beliefs.” And I was told that by doing so, I failed to serve the “greater good and the higher truth.”

He further informed me that I had created “dissonance for vulnerable and unformed thinkers” and “neurological disturbance in students’ beings and systems.” The school’s director of studies added that my remarks could even constitute harassment.

A few days later, the head of school ordered all high school advisors to read a public reprimand of my conduct out loud to every student in the school. It was a surreal experience, walking the halls alone and hearing the words emitting from each classroom: “Events from last week compel us to underscore some aspects of our mission and share some thoughts about our community,” the statement began. “At independent schools, with their history of predominantly white populations, racism colludes with other forms of bias (sexism, classism, ableism and so much more) to undermine our stated ideals, and we must work hard to undo this history.”

Students from low-income families experience culture shock at our school. Racist incidents happen. And bias can influence relationships. All true. But addressing such problems with a call to “undo history” lacks any kind of limiting principle and pairs any allegation of bigotry with a priori guilt. My own contract for next year requires me to “participate in restorative practices designed by the Office of Community Engagement” in order to “heal my relationship with the students of color and other students in my classes.” The details of these practices remain unspecified until I agree to sign.

Can you believe that oath he has to swear to? What is this—the Cultural Revolution? Well, yes, a form of it. Rossi also notes that many students have told him that they’re frustrated at the school’s “indoctrination” but are afraid to speak up against it. They’re never allowed to challenge the tenets of Critical Race Theory in class.

What this does, of course, is to stifle discussion and also to force—nay, brainwash—students into a narrow ideological mindset from which departure is heretical. As a private school in Manhattan, Grace is undoubtedly very expensive and has a lot of smart students. Yet their inquisitiveness and their dissent is being squashed flat.

I’ll add one more excerpt which shows how a “Cultural Revolution” is overtaking this school, as it is with many others:

Every student at the school must also sign a “Student Life Agreement,” which requires them to aver that “the world as we understand it can be hard and extremely biased,” that they commit to “recognize and acknowledge their biases when we come to school, and interrupt those biases,” and accept that they will be “held accountable should they fall short of the agreement.” A recent faculty email chain received enthusiastic support for recommending that we “‘officially’ flag students” who appear “resistant” to the “culture we are trying to establish.”

I expect that soon students will be waving copies of “White Fragility” as they denounce their teachers, who will be forced to wear paper dunce hats and signs around they’re necks—if they’re not fired. Rossi describes his suggestion that Glenn Loury be included among his students’ reading assignments, but that the administration nixed it on the grounds that “the moment were are in institutionally and culturally, does not lend itself to dispassionate discussion and debate.” Apparently, discussing Loury would “confuse and enflame students.”

Can you believe that? The students are denied the chance to learn that black thinkers don’t all agree with each other. But again, that’s the Cultural Revolution, Jake.

You’ll be familiar with Rossi’s description of what is happening, as it’s what’s happening in Smith College, the Dalton School in NYC, and almost every other school where mandatory “diversity training” is instituted.  Pushing back can cost you your job, as Jodi Smith and others have learned. But it’s heartening that people are willing to risk this because they’re committed to a kind of liberalism that unites rather than divides.

Oh hell, I want to reproduce Rossi’s ending as well:

One current student paid me a visit a few weeks ago. He tapped faintly on my office door, anxiously looking both ways before entering. He said he had come to offer me words of support for speaking up at the meeting.

I thanked him for his comments, but asked him why he seemed so nervous. He told me he was worried that a particular teacher might notice this visit and “it would mean that I would get in trouble.” He reported to me that this teacher once gave him a lengthy “talking to” for voicing a conservative opinion in class. He then remembered with a sigh of relief that this teacher was absent that day. I looked him in the eyes. I told him he was a brave young man for coming to see me, and that he should be proud of that.

Then I sent him on his way. And I resolved to write this piece.

At the end of this post, Bari gives an email address where you can write to Rossi expressing support, advice, or commiserating with him if you’re in a similar situation: teachingfortruth@gmail.com