It seems to be a dirty little secret in biology that most animals, including humans, have two and only two biological sexes. Gender (one’s assumed identity) may fall along a spectrum, but not sex. There are two. Only two. In animals, males make little wriggly little gametes—the sperm. Females make the large immobile gametes—the eggs. It is the capacity to produce one type of gamete or the other that is the biological definition of sex.

But this is a “dirty little secret” because is seems to contravene the view that if gender can take many forms, so can biological sex. In other words, denying the reality of what’s real is seen as politically expedient. And so we see scientific journals, science writers, and scientists themselves deny that there are just two sexes in humans—denying that sex is bimodal. (Yes, there are developmental aberrations and intermediate conditions, but they are vanishingly rare and are not “sexes” in the biological sense: they are the developmental derailing of the two sexes that have been favored by evolution.)

The denial of discrete sexes in humans is an ideological rather than a scientific position. It’s an embarrassment that the Society for the Study of Evolution took this position in an official statement, an embarrassment I highlighted in 2018. Conflating gender and sex, their statement said this:

We, the Council of the Society for the Study of Evolution, strongly oppose attempts by the Department of Health and Human Services (HHS) to claim that there is a biological basis to defining gender as a strictly binary trait (male/female) determined by genitalia at birth. Variation in biological sex and in gendered expression has been well documented in many species, including humans, through hundreds of scientific articles. Such variation is observed at both the genetic level and at the individual level (including hormone levels, secondary sexual characteristics, as well as genital morphology). Moreover, models predict that variation should exist within the categories that HHS proposes as “male” and “female”, indicating that sex should be more accurately viewed as a continuum. Indeed, experiments in other organisms have confirmed that variation in traits associated with sex is more extensive than for many other traits. Beyond the false claim that science backs up a simple binary definition of sex or gender, the lived experience of people clearly demonstrates that the genitalia one is born with do not define one’s identity. Diversity is a hallmark of biological species, including humans.  As a Society, we welcome this diversity and commit to serving and protecting members regardless of their biological sex, gender identity or expression, or sexual orientation.

Notice the conflation of “sex” with “gendered expression of sex”, the claim that “sex should be more accurately viewed as a continuum”, and the “false claim that science backs up a simple binary definition of sex”. To a sentient biologist, that statement is “not even wrong” except in a very few species of animal.  The ideological motivation for the statement becomes clear in the last sentence above.

Another scientist, Sarah Hearne, writing in the British magazine The Skeptic (motto: “reason with compassion”), makes the same conflation, and also for ideological rather than scientific reasons. You can read her piece by clicking on the screnshot below.  Fortunately, Hearne’s errors about sex have been corrected by a piece at The Quackometer (see further down). 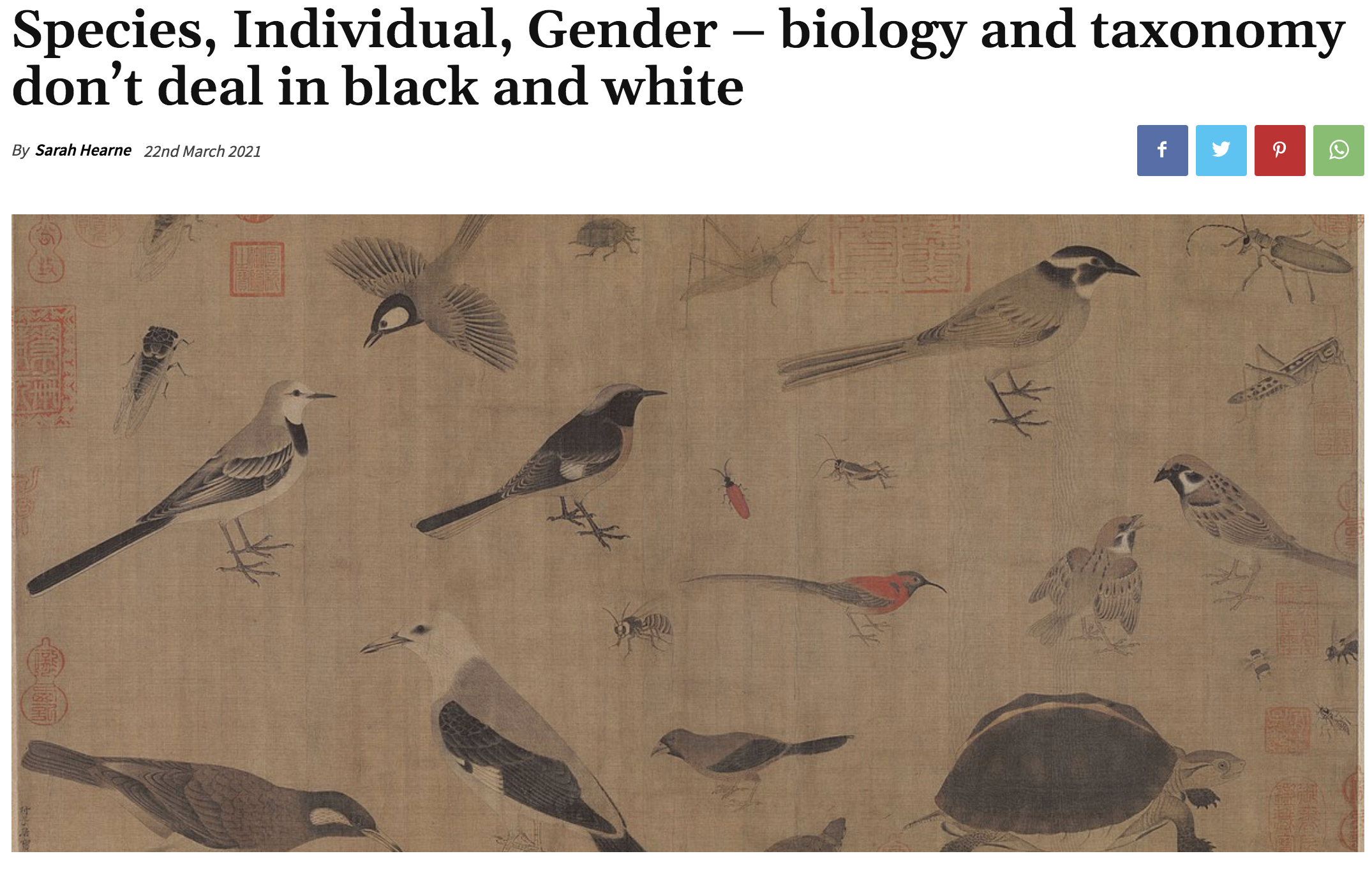 Hearne, a graduate student in marine ecology, writes popular science well, and she gets off to a good start by showing that the concept of “species” is a bit slippery. There are intermediate cases, cases where we can’t determine whether two populations are species, and asexual groups in which determining “species” is pretty much subjective. (Allen Orr and I discuss this in our technical book Speciation.)

Hearne then goes on to show that the concept of an “individual” also breaks down in some groups, though is pretty easily definable in humans (of course there are rare exceptions, like conjoined twins). But these two episodes are just the prelude for her big point: that biological sex, like species, is an indefinable concept. Her main point is although we can define sex by gamete type, recognizing sex by other characteristics, like presence of breasts, hairiness, and on so, is much more difficult.  Ergo “nature abhors the clean division” of two sexes.

That her argument is political becomes clear at the end of her piece: one’s sex is a social construct, ergo can be declared at will by anyone. And women are oppressed:

But we should also bear in mind that women aren’t discriminated against because they have vaginas, or breasts, or even because they have babies. Having babies makes it easier to discriminate against us, but the pay gap still exists for childfree women. It goes back to gender – the “socially constructed roles, behaviours, expressions and identities” that have led women to be less valued than men in society.

Those social constructions may have had biological roots long ago, but that’s no reason to continue perpetuating them unquestioningly. If someone says they are a woman and are seen by society as a woman then they experience the same socially constructed barriers and stigmas that all women experience to varying degrees.

Yes, but biological males declaring themselves as women become “trans” in the gender sense but not in the biological sense. (I always wonder, if sexes are not discrete, why there are “trans males” and “trans females.”  What is being transited?) A transgender woman is a “gender woman” but not a “biological woman”. This is clarified by Andy Lewis in the Quackometer piece below, which pinpoints Hearne’s fundamental error (the title gives a clue). Click on the screenshot to read it: 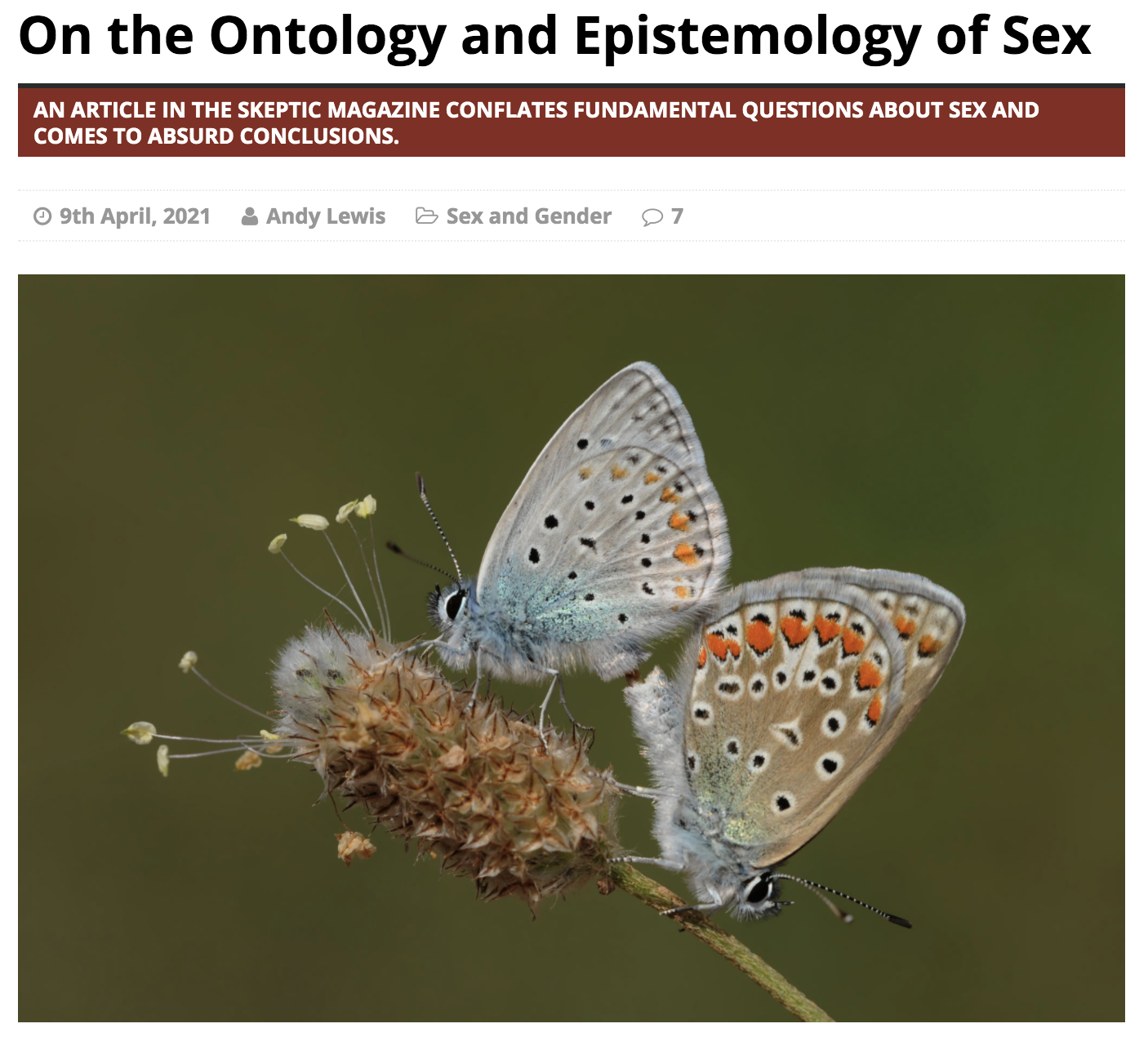 But Hearne is making a fundamental error here: she is conflating the ontology and epistemology of sex. That is, she is confusing two different sets of questions…

Hearne starts off well by explaining the universally accepted biological definition of a female as the sex that produces ova. This is where she could have stopped. There is no disagreement here in the peer reviewed biology. But that would have meant her article failed, as unlike the terms “species” and “individual” in biology, the definition of what a sex is is clear cut and defined by reproductive role associated with a gamete type. The sexes are not like species where evolution has produced a myriad of variants over millions of years. The sexes of male and female appear to be a well conserved and stable reproductive strategy that has existed unchanged for between about 500 million and 1.3 billion years. Sex is a stable biological phenomenon, across vast evolutionary time, that we can easily define.

So, to give the impression that “female” is not clear-cut, Hearne switches from ontology to epistemology. We are not supposed to notice this switch. And to be fair, I doubt she realises she is doing it.

Hearne is trying to convince us that although biologists might have a definition of each sex, our knowledge of an individual’s sex may well be unknown because we cannot use the biologists definition in any practicable way in ordinary circumstance. Therefore – tada – “woman” is an unreliable concept.

That’s really all you need to say to refute her claim (remember, we’re dealing with biological sex, not gender). But Lewis has a few more points to make as well. First, what about the “intermediate” conditions that supposedly efface the binary nature of biological sex in humans? Lewis:

A common objection that crops up here are congenital development conditions. The existence of so-called intersex conditions is often seen as an ontological threat to our understanding of sex rather than an epistemological problem. That is, there is a claim that such congenital conditions lead to a need to redefine what a sex is and its characterisation (often expressed as “sex is a spectrum”). Instead it is a medical/biological problem of knowing what sex someone (or a butterfly) is when the usual secondary sex characteristics may be ambiguously formed. No peer reviewed biology paper has ever attempted to characterise sex as some sort of spectrum of possibilities despite absolute convictions about the matter from ideological positions.

The purpose of such arguments presented here in The Skeptic magazine is for us to be convinced that sex is arbitrary and not objectively knowable and to abandon objective attempts to define terms like male, female, man and woman. It is a textbook example of postmodernist denialism of science, reason and objectivity, using sleight of hand to undermine understanding. Such arguments are now so common and fashionable, even among those educated in medicine and biology, that recently the Endocrine Society in the US felt it needed to publish a position statement on the fact that sex is real, binary and immutable, and that recording sex accurately was vital in healthcare and research as we should not conflate sex and gender.

The rest of the argument presented in the Skeptic article then goes off on the predictable route of defending gender ideology that the only meaningful expression of sex (or gender) is through self-declaration – that you can be a man or woman only meaningfully though “identifying” as either. We are supposed to ignore the inherent incoherence and circularity here as otherwise we would would not be “kind” or, even worse, horrible bigots. We just have to accept that one can be a woman when the word “woman” has been denied any sort of objective meaning.

The denial of binary sex in humans (and many other animals, like my beloved Drosophila), is as irksome to me as it would be for a chemist to hear that the chemical elements are not discrete but form a continuum from hydrogen up to heavy elements: a continuum between copper, silver, and gold so that you can’t identify an atom as one or the other. That’s nonsense, of course, but no more nonsensical than denying the discreteness of biological males and females. The only difference is that there are no ideological implications of recognizing discrete chemical elements.

105 thoughts on “The Skeptic magazine is skeptical about two sexes in humans; a clear thinker sets them straight”