The answer to Ross Douthat’s title question below is, of course, “no”: the meritocracy, which I suppose one can define as either the rich or the educated, are increasingly giving up religion. And, if history be any guide, they’re unlikely to go back to it. Click on the screenshot below to read Douthat’s elegy for the loss of religion among America’s elite, his reasons why it’s happening, and his straw-grasping about how the meritocracy might come back to God. (Douthat is, of course, a staunch Catholic.) 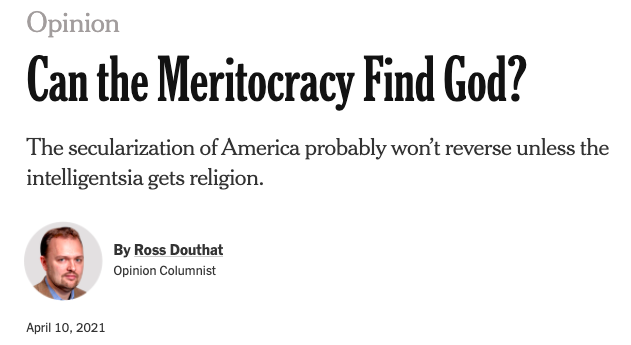 Last year, by even Douthat’s admission, only 47% of Americans belonged to a church, mosque, or synagogue.  Two years ago, in an article called “In U.S., decline of Christianity continues at rapid pace,” the Pew Research Center presented the following graphs. As American Christianity has declined quickly, the proportion of “nones”—those who see themselves as agnostics, atheists, or holding “no religion in particular”—is growing apace. (remember, this is over only a dozen years).

The fall in religiosity has been faster among the younger than the older, among Democrats than among Republicans, and among those with more education rather than less.

A key piece of this weakness is religion’s extreme marginalization with the American intelligentsia — meaning not just would-be intellectuals but the wider elite-university-educated population, the meritocrats or “knowledge workers,” the “professional-managerial class.”

Most of these people — my people, by tribe and education — would be unlikely models of holiness in any dispensation, given their ambitions and their worldliness. But Jesus endorsed the wisdom of serpents as well as the innocence of doves, and religious communities no less than secular ones rely on talent and ambition. So the deep secularization of the meritocracy means that people who would once have become priests and ministers and rabbis become psychologists or social workers or professors, people who might once have run missions go to work for NGOs instead, and guilt-ridden moguls who might once have funded religious charities salve their consciences by starting secular foundations.

But this all sounds good to me! Isn’t it better to have more psychologists, social workers, and professors instead of more clerics? At least the secular workers are trained to do their job, and don’t have a brief to proselytize or inculcate children with fairy tales.

But no, not to Douthat. Implicit in his column is the worry that without religion, America would be less moral. (He doesn’t state this outright, but absent that belief his column makes no sense. Unless, that is, he’s interested in saving souls for Jesus.)

As a Christian inhabitant of this world, I often try to imagine what it would take for the meritocracy to get religion. There are certain ways in which its conversion doesn’t seem unimaginable. A lot of progressive ideas about social justice still make more sense as part of a biblical framework, which among other things might temper the movement’s prosecutorial style with forgiveness and with hope. Meanwhile on the meritocracy’s rightward wing — meaning not-so-woke liberals and Silicon Valley libertarians — you can see people who might have been new atheists 15 years ago taking a somewhat more sympathetic look at the older religions, out of fear of the vacuum their decline has left.

You can also see the concern with morality as Douthat proffers two reasons why, he thinks, the elite are prevented from hurrying back to Jesus, Moses, or Muhammad:

One problem is that whatever its internal divisions, the American educated class is deeply committed to a moral vision that regards emancipated, self-directed choice as essential to human freedom and the good life. The tension between this worldview and the thou-shalt-not, death-of-self commandments of biblical religion can be bridged only with difficulty — especially because the American emphasis on authenticity makes it hard for people to simply live with certain hypocrisies and self-contradictions, or embrace a church that judges their self-affirming choices on any level, however distant or abstract.

Again, I’m baffled about why Douthat sees religiously-based morality, particularly of the Catholic variety, as superior to humanistic morality. After all, only religious “morality” prescribes how and with whom you can have sex, the supposed “role” of women as breeders and subservient partners, the demonization of gays, the criminality of abortion, the desirability of the death penalty, and the immorality of assisted dying.  What kind of morality do you expect to get by following the dictates of a bunch of superstitious people from two millennia ago, people who had to posit an angry god to explain what they didn’t understand about the cosmos? You get the brand of religion that Douthat wants us all to have! For he sees religiously deontological morality as better than think-for-yourself morality: the “the thou-shalt-not, death-of-self commandments of biblical religion.”

And it’s clear, as Douthat continues his risible lament for the loss of faith, that he sees no contradiction between rationality and superstition, though the conflict between them, and the increasing hegemony of science in explaining stuff previously within God’s bailiwick, is what is driving the educated to give up their faith:

A second obstacle [to the elite regaining faith] is the meritocracy’s anti-supernaturalism: The average Ivy League professor, management consultant or Google engineer is not necessarily a strict materialist, but they have all been trained in a kind of scientism, which regards strong religious belief as fundamentally anti-rational, miracles as superstition, the idea of a personal God as so much wishful thinking.

Thus when spiritual ideas creep back into elite culture, it’s often in the form of “wellness” or self-help disciplines, or in enthusiasms like astrology, where there’s always a certain deniability about whether you’re really invoking a spiritual reality, really committing to metaphysical belief.

There are two misconceptions in two paragraphs. The first is that professors indoctrinate students with the belief that there is no God—we are training them in atheism, materialism, and scientism. But we don’t do that: the students give up God because, as they learn more, they also grasp that, as Laplace supposedly replied to Napoleon, we “have no need of that hypothesis.” If there were actual evidence for miracles and a theistic god, people wouldn’t abandon their faith.

Further, although some of the “nones” are spiritual in the sense of embracing stuff like astrology or crystal therapy, I see no evidence of a rise in embracing of woo as profound as the decline in religiosity.  The example of Scandinavia, which converted from religiosity to atheism in about 250 years, shows not only that religion isn’t needed to create a moral, caring society (indeed, it shows that religion is inimical to this), but also that religion needn’t be replaced by other forms of woo. As far as I know, the Danes and Swedes aren’t fondling their crystals with alacrity.

Nothing will shake Douthat’s faith in God, nor his faith in faith as an essential part of society—in this he resembles his co-religionist Andrew Sullivan—but he does adhere to a form of intelligent design held by those sentient people who are still religious:

Yes, science has undercut some religious ideas once held with certainty. But our supposedly “disenchanted” world remains the kind of world that inspired religious belief in the first place: a miraculously ordered and lawbound system that generates conscious beings who can mysteriously unlock its secrets, who display godlike powers in miniature and also a strong demonic streak, and whose lives are constantly buffeted by hard-to-explain encounters and intimations of transcendence. To be dropped into such a world and not be persistently open to religious possibilities seems much more like prejudice than rationality.

I don’t seem to have had those hard-to-explain encounters or intimations of transcendence. I must be missing my sensus divinitatis! What Douthat takes as evidence for God, like the tendency of humans to be clever but sometimes nasty, can be understood by a combination of our evolutionary heritage and our cultural overlay. The same holds for “a system that generates conscious beings.” It’s evolution, Jake!

In the end, Douthat is as baffled by we secularists’ rejection of God as I am by his credulous acceptance of the supernatural as the only plausible explanation for the Universe:

And my anthropological understanding of my secular neighbors particularly fails when it comes to the indifference with which some of them respond to religious possibilities, or for that matter to mystical experiences they themselves have had.

Like Pascal contemplating his wager, it always seems to me that if you concede that religious questions are plausible you should concede that they are urgent, or that if you feel the supernatural brush you, your spiritual curiosity should be radically enhanced.

Well, as a scientist one must always give a degree of plausibility to any hypothesis, but when that degree is close to zero on the confidence scale, we need consider it no further. Based on the evidence, the notion of a god is as implausible as notions of fairies, leprechauns, or other such creatures.  And if the plausibility is close to zero, then so is the urgency.  And even if the questions are urgent, which I don’t believe since the world’s well being doesn’t depend on them, they are also unanswerable, making them even less urgent. Would Douthat care to tell me why he thinks the Catholic god is the right one rather than the pantheon of Hindu gods, including the elephant-headed Ganesha? Isn’t it urgent to decide which set of beliefs is right?

But maybe it’s because I never felt the supernatural brush me.