From Pupperish we have a compendium that seems to crop up regularly. Click on the screenshot to see the oddly sleeping moggies.

This cat apparently has three beds but prefers to sleep in a loaf pan. (from reddit) 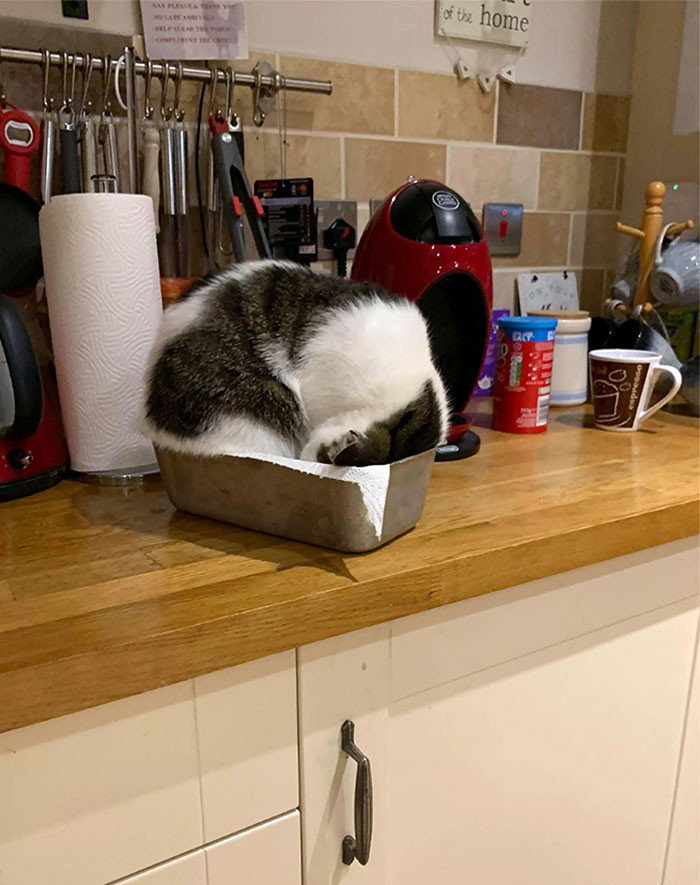 This cat prefers a wok: 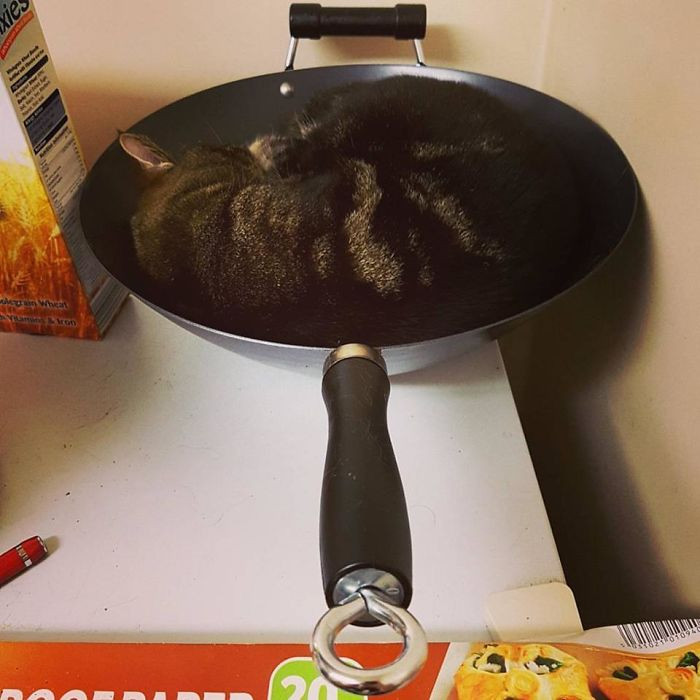 There are many photos of cats neglecting fancy and expensive commercial cat beds for mundane locations. Here are three. 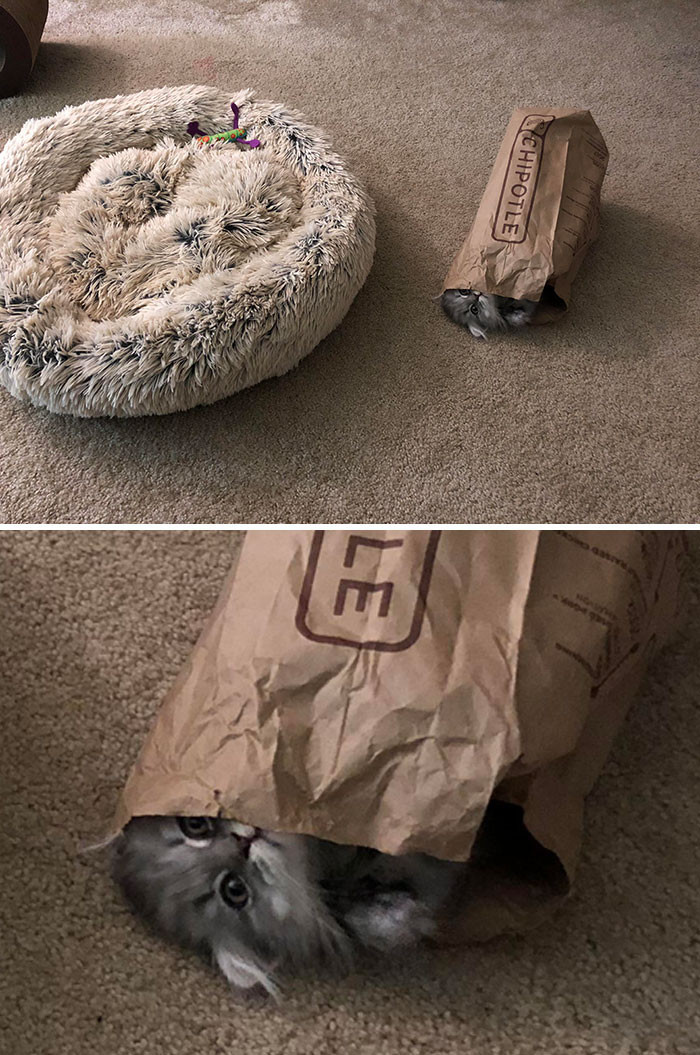 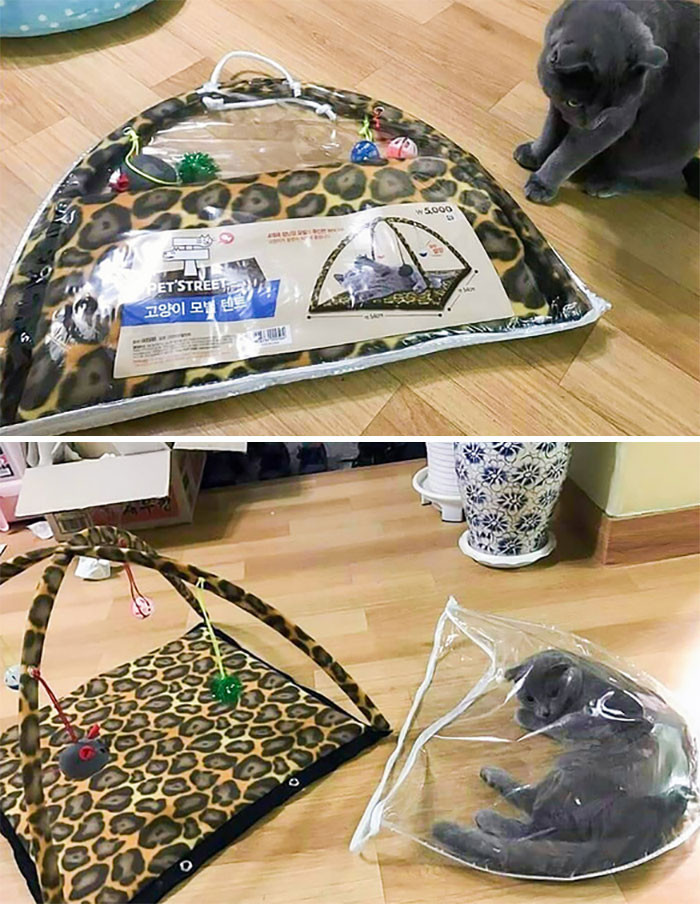 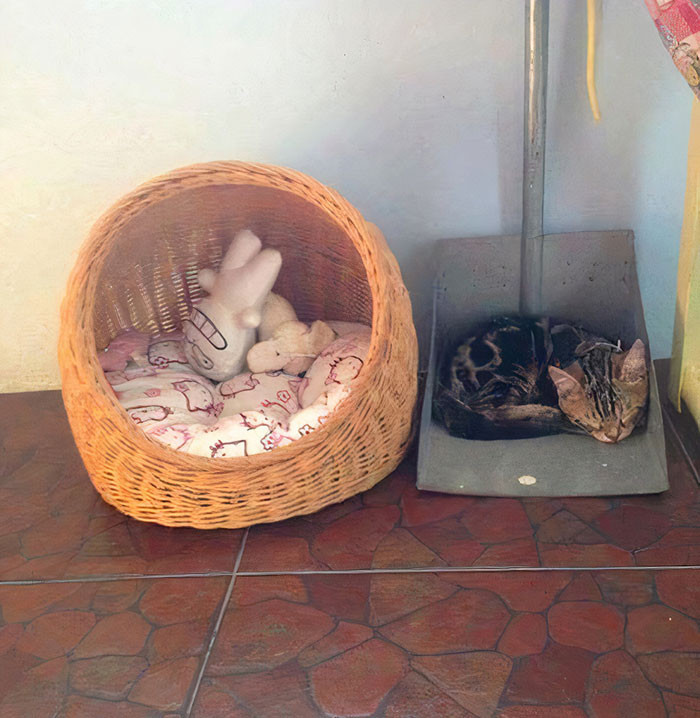 One more, but go look at the other 44! (There are several examples of cats who will sleep in their cat beds, but only if you put a cardboard box into it.) 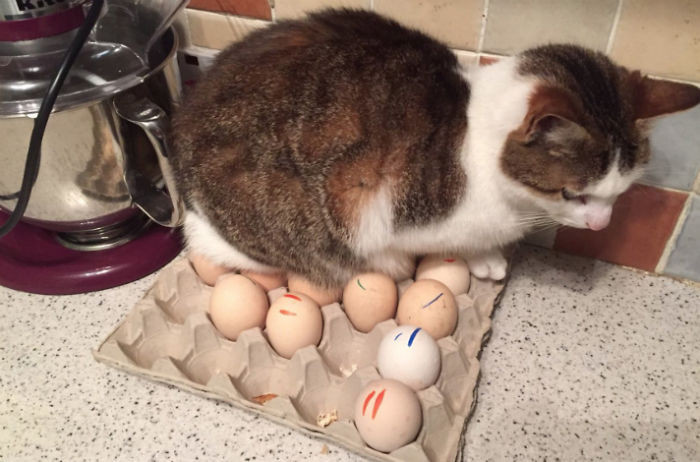 From the Guardian we learn of a cat café in Dubai that doubles as an adoption center—as all good cat cafés should. This is the first such establishment in the Middle East, though I would have thought there would be one in Turkey. Click on screenshot to read the tale

25 cats live in the cafe, and the article is all pictures. The first one shows the owner: 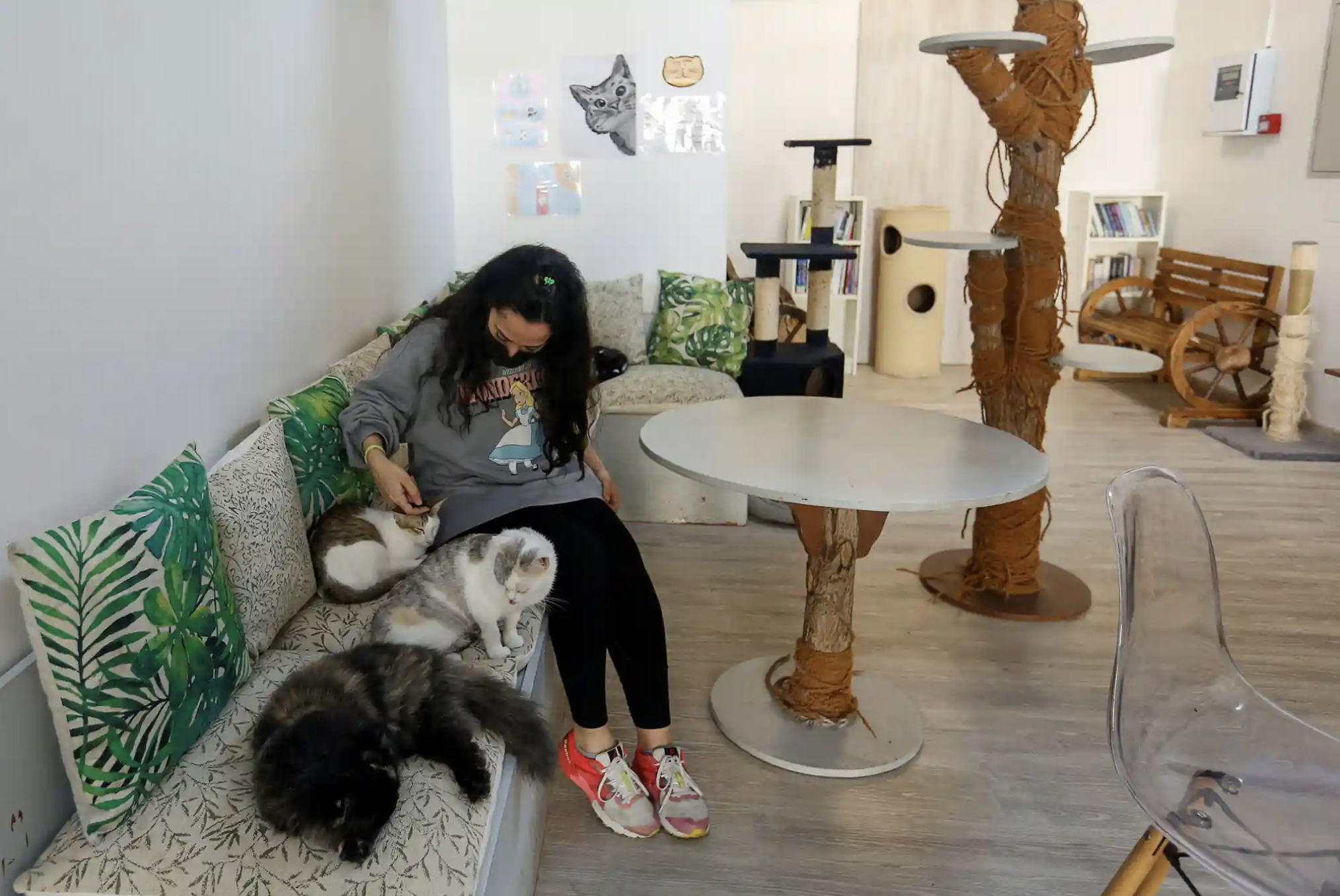 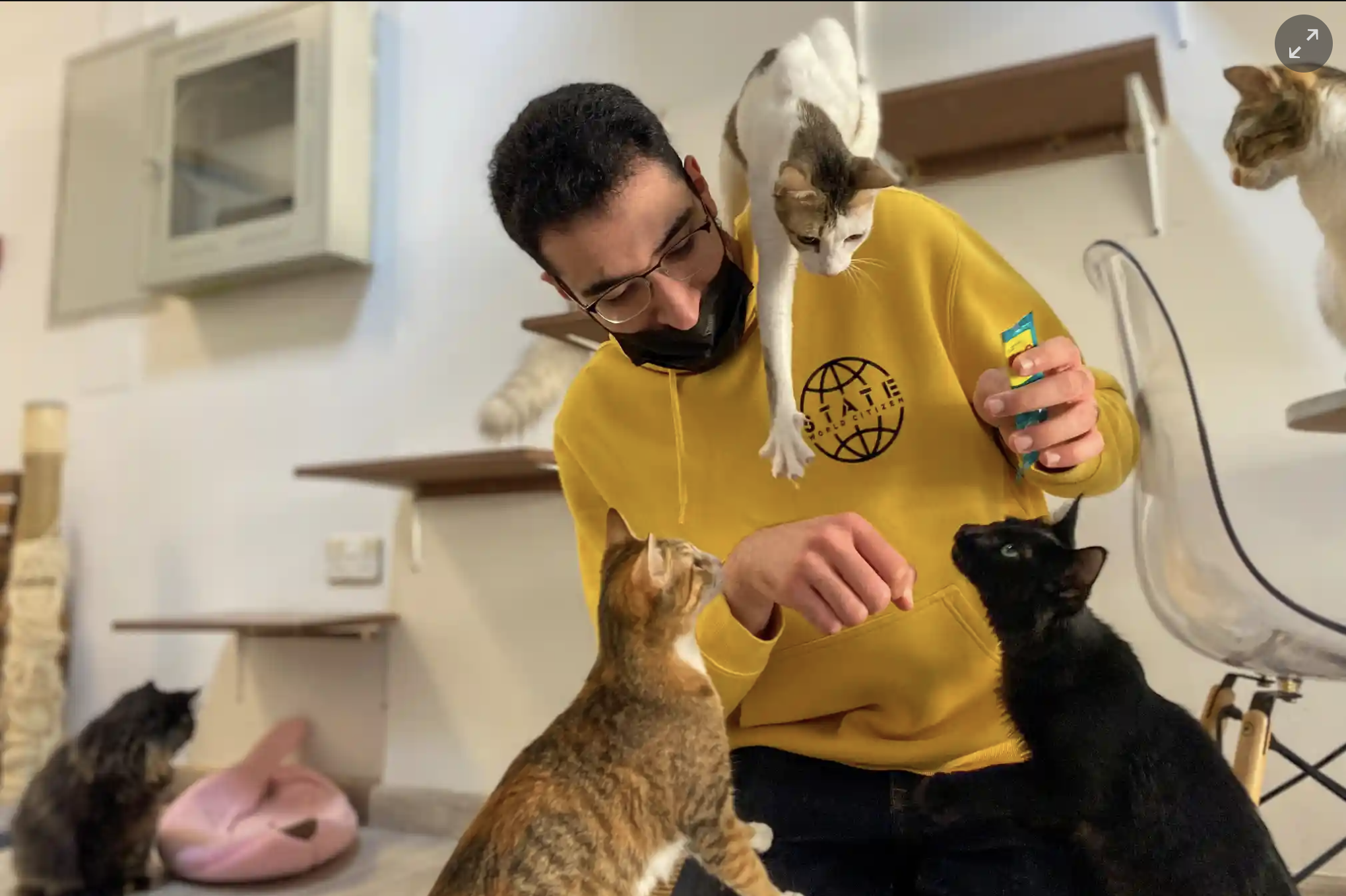 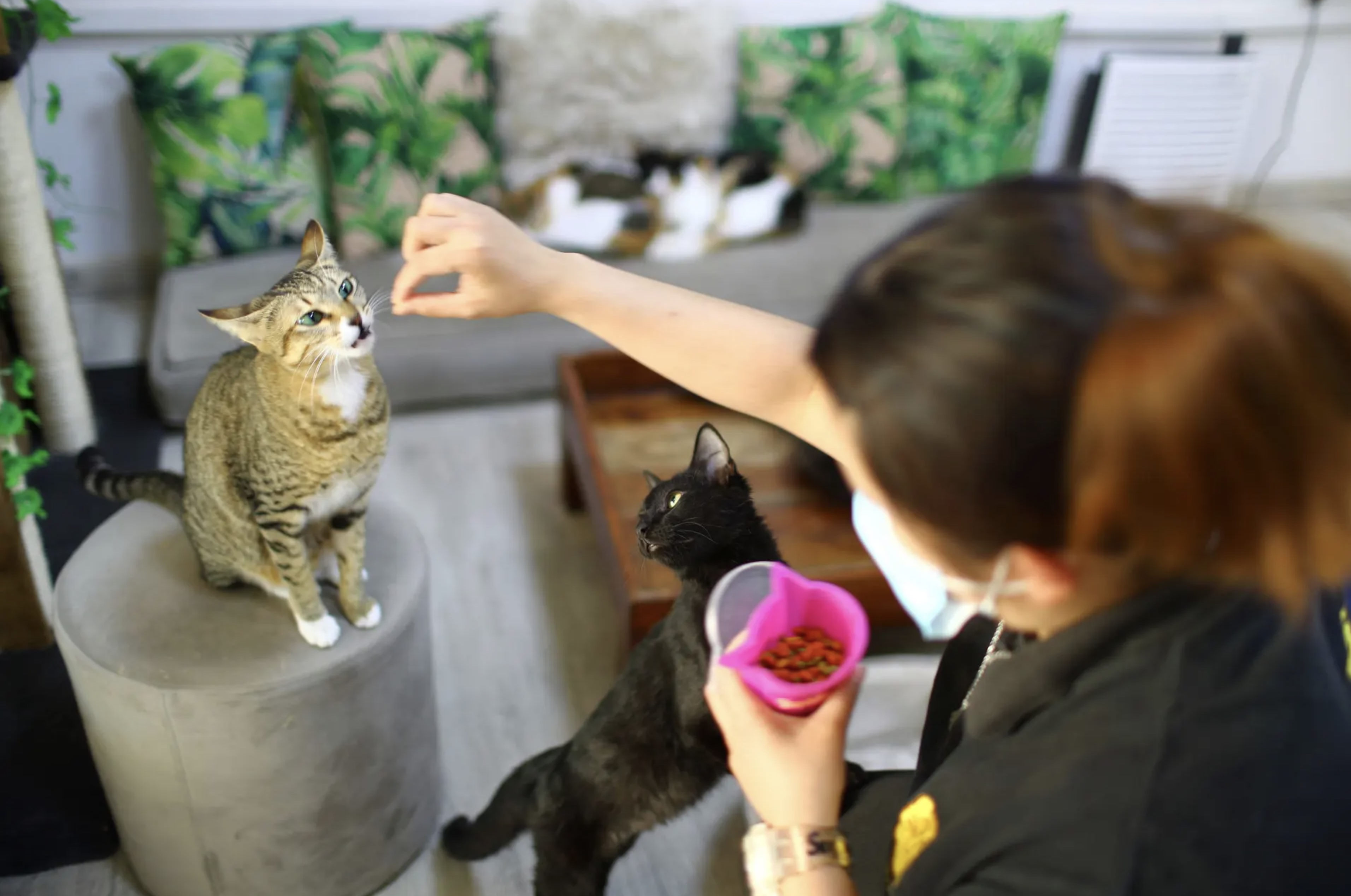 This is a lovely cat: 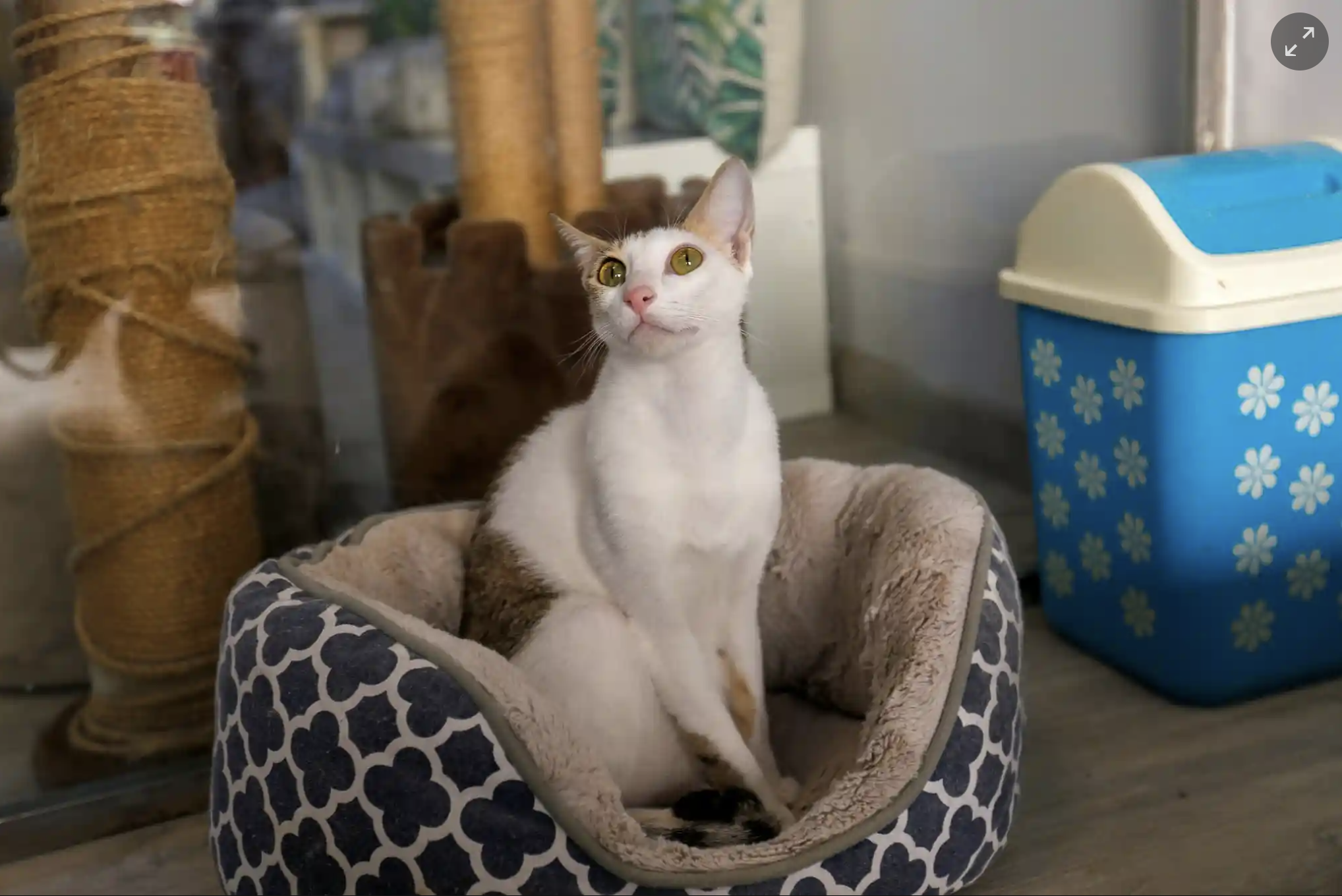 From The Sun (of course) we have a “demon cat” who some people think needs an exorcism. Click on the screenshot:

It’s a nice cat (a Cornish Rex)! Text is indented:

A CAT with “creepy” facial expressions has been dubbed a demon according to an exorcist who has urged the pet’s owner to “cage him and pray.”

Alyson Kalhagen, of Green Bay, Wisconsin, intended to showcase the “beauty and refinement” of her cat Pixel through posting photos of her beloved cats online, but received quite a different response.

But Pixel can look a bit, well, deranged: 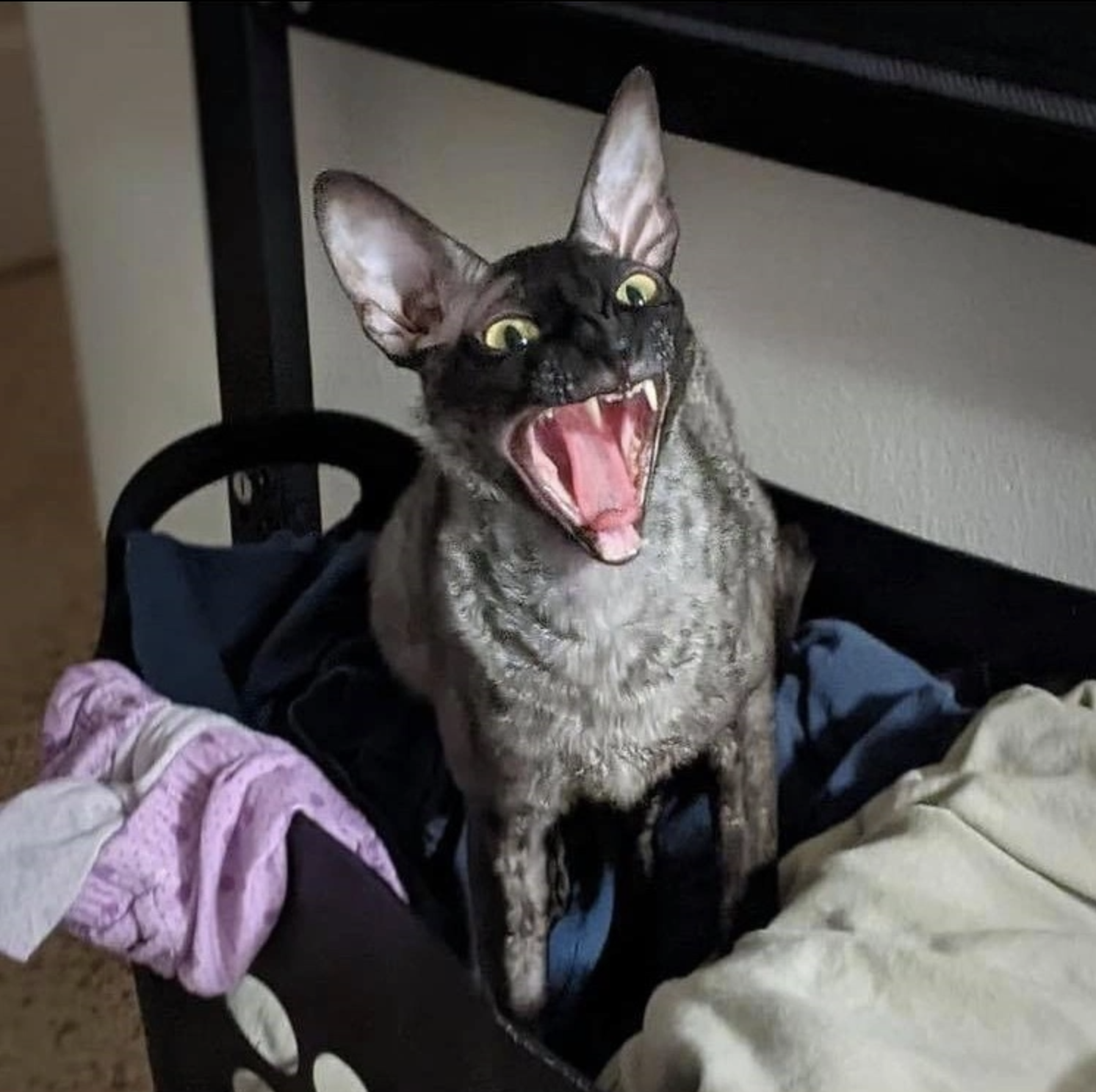 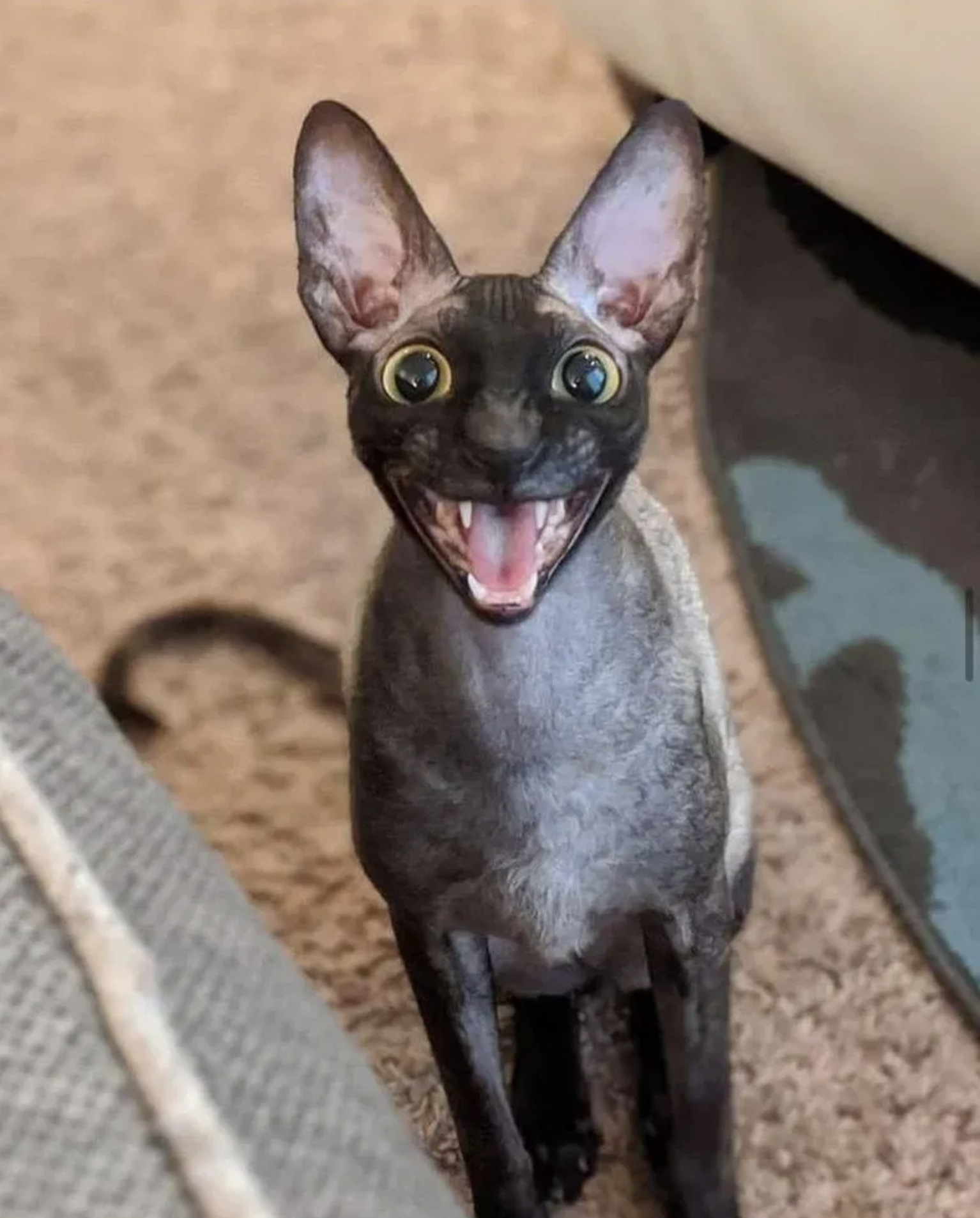 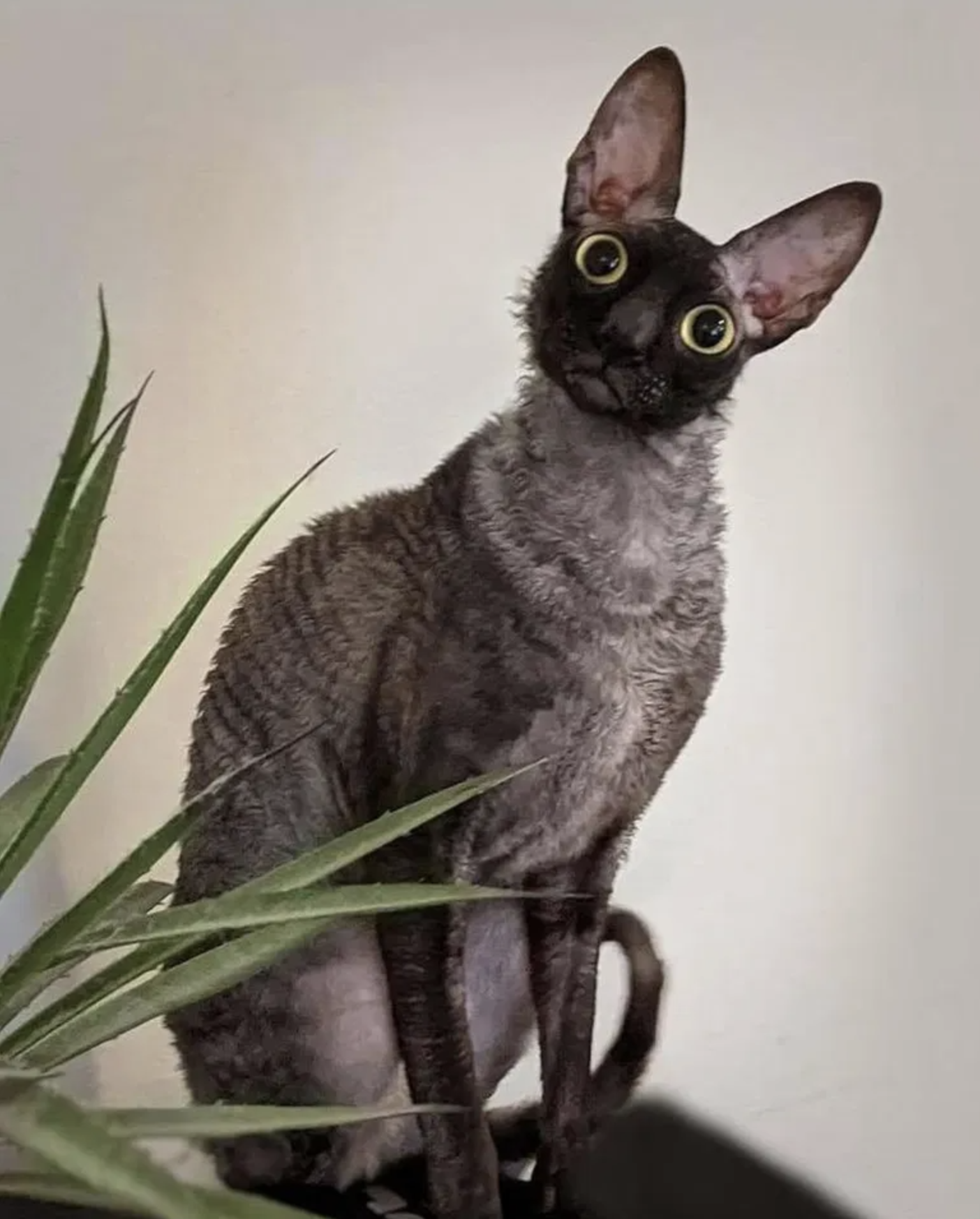 The “creepy” cat images of Kalhagen’s Cornish Rex prompted people to repeatedly claim he must be possessed by a demon.

The 39-year-old cat mom revealed she’s constantly contacted by those afraid of her little kitty – who’s been likened to a “sleep paralysis demon” and labeled as the “creepiest cat ever.”

The mother-of-one said her two-year-old cat’s “unique looks” have sparked curiosity among onlookers – with some comments, coming from a “place of real fear and hesitation.”

An exorcist contacted Kalhagen earlier this month to warn her that a demon was using her pet as a “puppet,” telling her she must keep Pixel caged and pray “over and over” in front of him for the demon to leave. 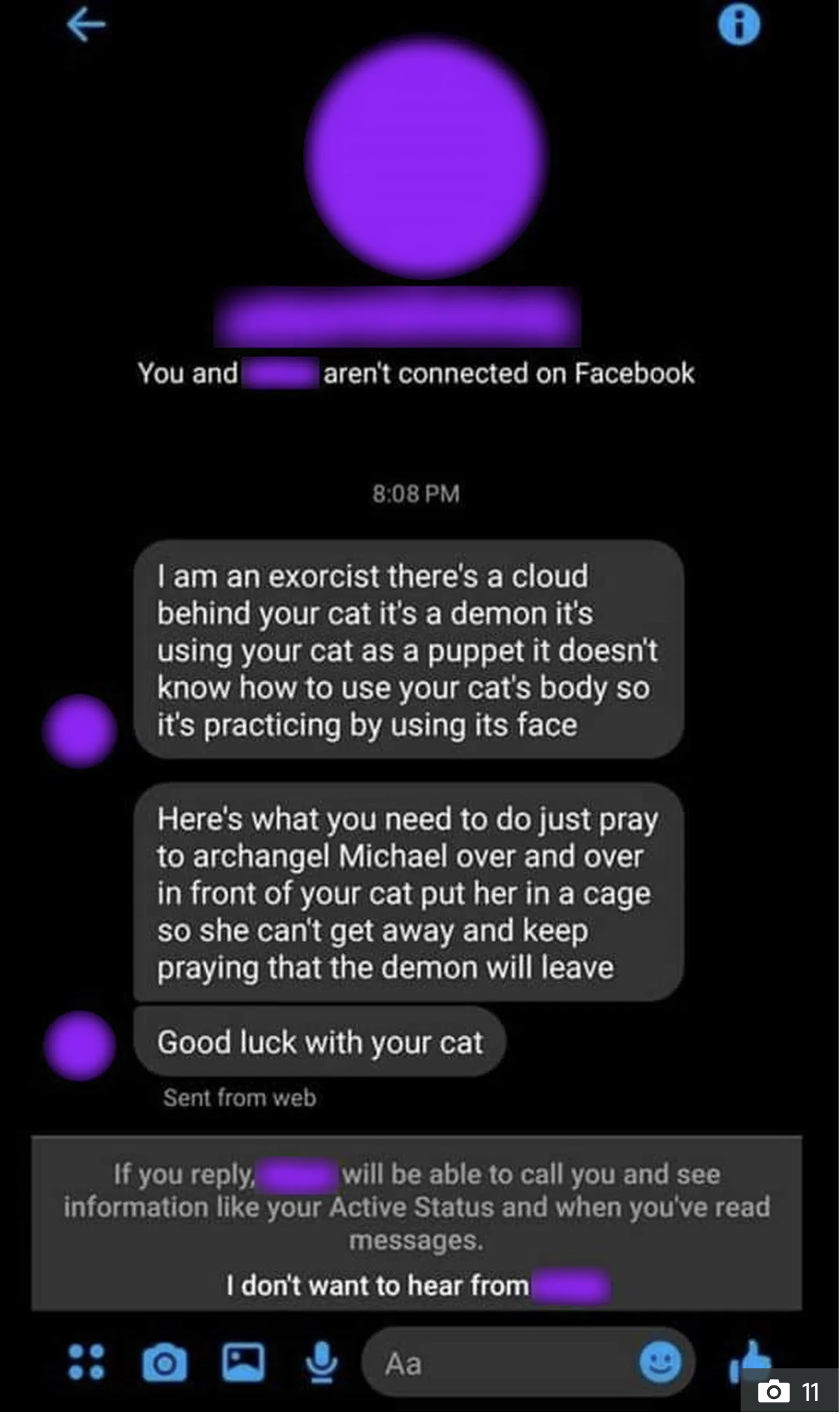 Kalhagen has admitted that Pixel – equipped with disproportionately large eyes, ears and small head – has left her “startled” at times.

She said she refrained from uploading images of Pixel with expressions “too wild for public consumption.”

Despite the feline’s demonic looks, Kalhagen has claimed he’s actually a “very loving cat” – one with more than 12,000 followers on social media.

I think Pixel is a lovely cat. Don’t you agree? 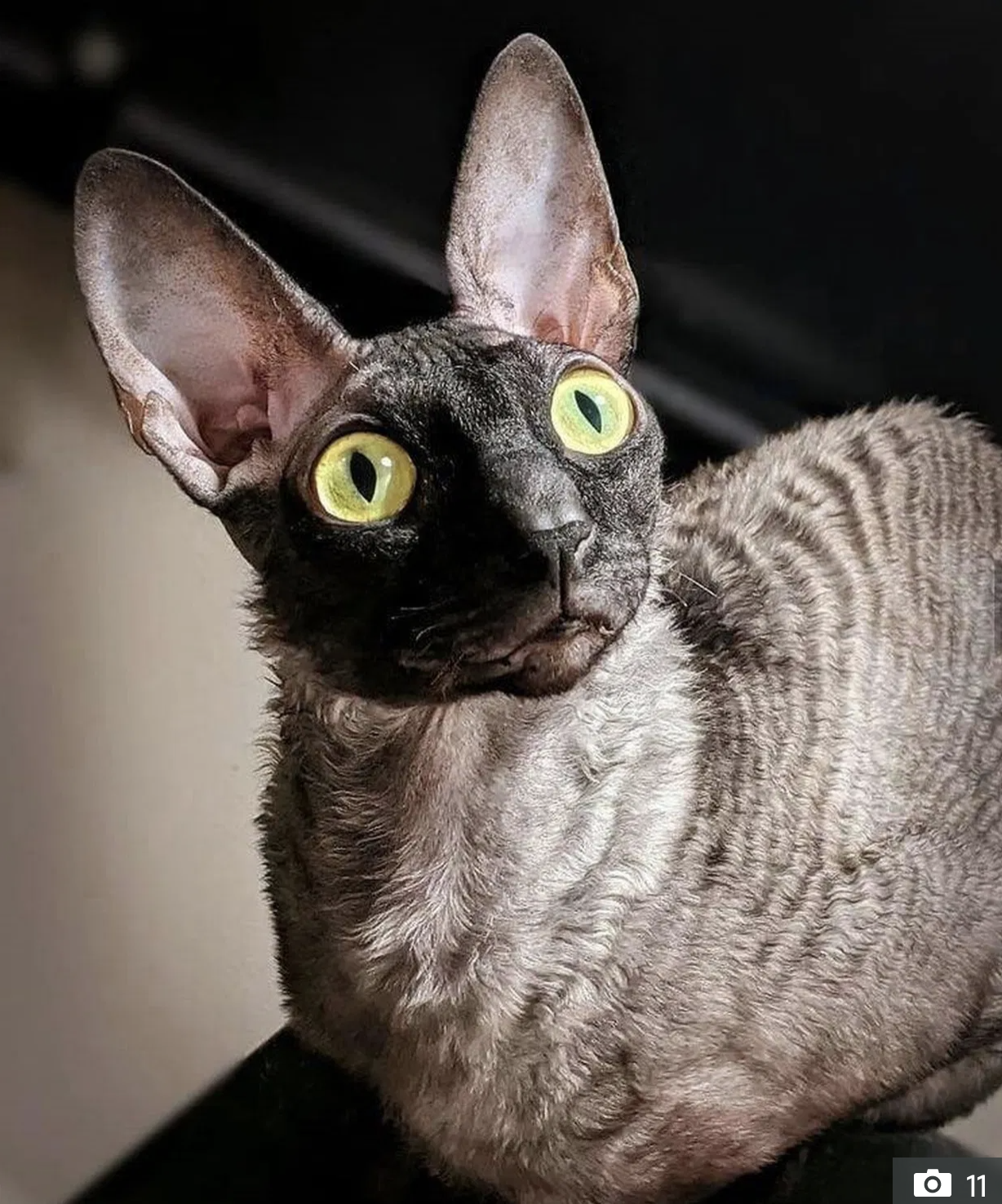 Pixel with her staff: 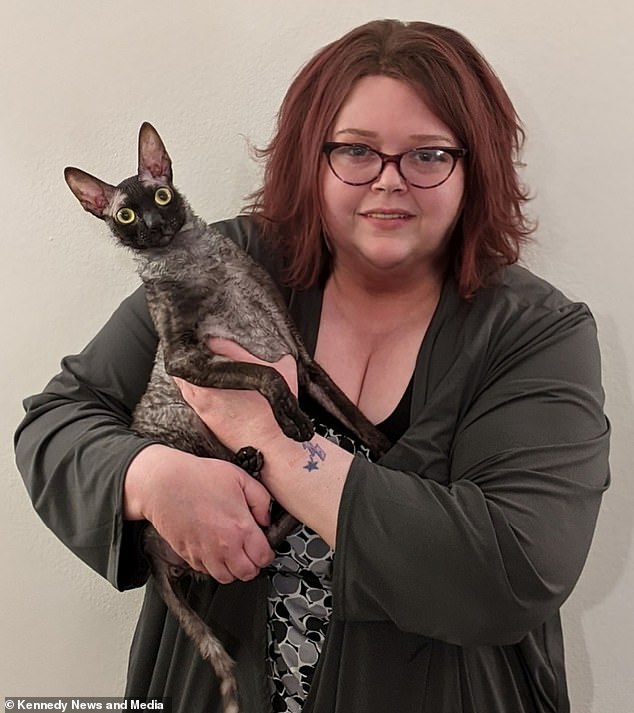 Lagniappe:  From DNYUZ we have a cat-related case of a digital product selling for a lot of money in cryptocurrency. In this case the digital image is of Nyan Cat, a character

In the 10 years since Chris Torres created Nyan Cat, an animated flying cat with a Pop-Tart body leaving a rainbow trail, the meme has been viewed and shared across the web hundreds of millions of times.

On Thursday, he put a one-of-a-kind version of it up for sale on Foundation, a website for buying and selling digital goods. In the final hour of the auction, there was a bidding war. Nyan Cat was sold to a user identified only by a cryptocurrency wallet number. The price? Roughly $580,000.

Mr. Torres was left breathless. “I feel like I’ve opened the floodgates,” he said in an interview on Friday.

The sale was a new high point in a fast-growing market for ownership rights to digital art, ephemera and media called NFTs, or “nonfungible tokens.” The buyers are usually not acquiring copyrights, trademarks or even the sole ownership of whatever it is they purchase. They’re buying bragging rights and the knowledge that their copy is the “authentic” one.\

Blockchain technology, which is most often associated with Bitcoin, is changing that. NFTs rely on the technology to designate an official copy of a piece of digital media, allowing artists, musicians, influencers and sports franchises to make money selling digital goods that would otherwise be cheap or free.

In an NFT sale, all the computers hooked into a cryptocurrency network record the transaction on a shared ledger, a blockchain, making it part of a permanent public record and serving as a sort of certification of authenticity that cannot be altered or erased.

The nascent market for these items reflects a notable, technologically savvy move by creators of digital content to connect financially with their audience and eliminate middlemen.

Some NFT buyers are collectors and fans who show off what they have bought on social media or screens around their homes. Others are trying to make a quick buck as cryptocurrency prices surge. Many see it as a form of entertainment that mixes gambling, sports card collecting, investing and day trading. 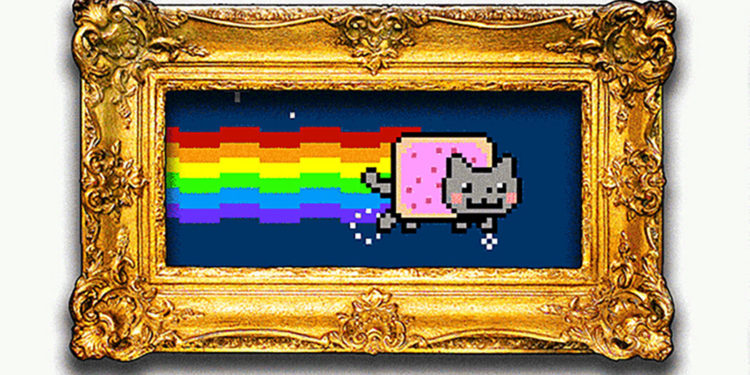