I had forgotten that yesterday was Holocaust Remembrance Day (in transliterated Hebrew: Yom Hazikaron laShoah ve-laG’vurah, or in the original יום הזיכרון לשואה ולגבורה), marked around the world but especially in Israel. The date varies from year to year as it’s fixed in the Hebrew calendar, which isn’t synchronized with ours.  The time will come soon when those who survived the Holocaust, including those who spent time in concentration camps, will no longer be among the living.

As I didn’t post anything yesterday, here’s a bit of news that shows that this genocide is remembered by many and denigrated by others.

As a Jewish website notes, the picture below was taken in 2015 at the entrance to Auschwitz by Miriam Ciss, daughter of Julius Ciss, the executive director of Jews for Judaism, Canada. It shows Miriam holding the Israeli flag at the entrance through which so many doomed Jews (and gays, Romas, and so on) passed. The photo could be seen as a statement that the state of Israel was a result of what happened during the Holocaust. 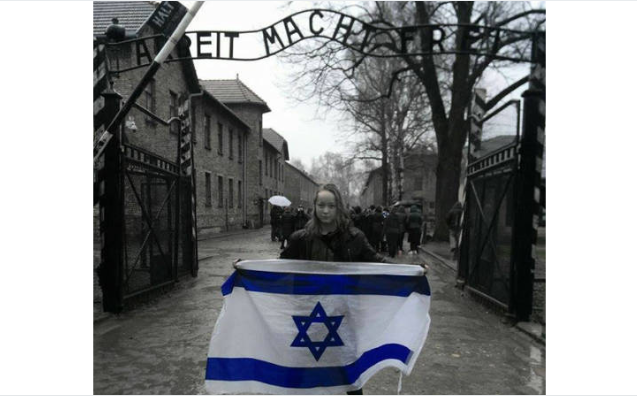 If you find that offensive, there’s probably something wrong with you. But Facebook did! As the site notes:

Ciss has given us permission to repost what he wrote on Facebook, presenting Facebook’s response to the picture:

Last week I posted the following regarding how Facebook had tagged the attached photo as “insensitive”:

“It seems that someone complained to Facebook about this previously posted photo of my daughter at Auschwitz Concentration Camp. When I posted it, I stated:

“My daughter, Miriam Ciss, was in Auschwitz Concentration Camp today. My mother Helena and Aunt Dolly survived Auschwitz Birkenau. This is just one of the amazing photos she took. Shabbat Shalom and Happy Passover.

“What I didn’t say was that aside from my parents and aunt, the Nazis murdered both my father’s and mother’s entire families.

“Well, today I received the following notice from Facebook: ‘Your photo wasn’t removed because it doesn’t violate our community standards, but it has been marked as insensitive because it could offend or upset people.’

I don’t know what that means, except that someone must have complained, and some functionary of Facebook in some country must have agreed with the assessment.  Fortunately, people complained about the “insensitive” label and Facebook apologized this way:

“It has come to our attention that a piece of your content was mistakenly flagged by one of our reps. This was a mistake and we’ve reversed the action taken. We apologize for our error.” – Eleanor, Community Operations, Facebook

The article ends with a touching incident that Miriam experienced in her 2015 visit to the death camps in Poland, but I’ll let you read that for yourself.

Primo Levi, who survived Auschwitz, and wrote the moving book If This is a Man about his experience, said of the Holocaust:  “It happened, therefore it can happen again. . . It can happen, and it can happen everywhere.”  I am not as pessimistic as he (his death was likely a suicide), but neither am I as certain as I used to be that we’ve moved beyond the possibility, at least in the West, that such a genocide could recur.

36 thoughts on “Facebook puts a damper on Holocaust Remembrance Day”