Good morning on a humpish day: Wednesday, April 7, 2021. It’s National Beer Day, and this made me realize again that I haven’t had a drop of alcohol since I came to Texas. No Pearl, no Shiner—nada. This is because my large meals are at lunch, and I don’t like to drink before dinner.

THE BIG NEWS: Honey laid her first egg! She’s nesting on the third floor above Botany Pond, and we’ve covered the window with cardboard so she won’t be disturbed. When she was on the pond yesterday, Jean Greenberg of Team Duck peeked at the ledge and saw Honey’s nest (still a bit messy) and the first egg (circled in Jean’s photo below). After she lays the rest of her clutch at a rate of one egg per day, she’ll start sitting on them and then, 28-29 days later, we will have ducklings.

The egg, pastel green as usual, is circled: 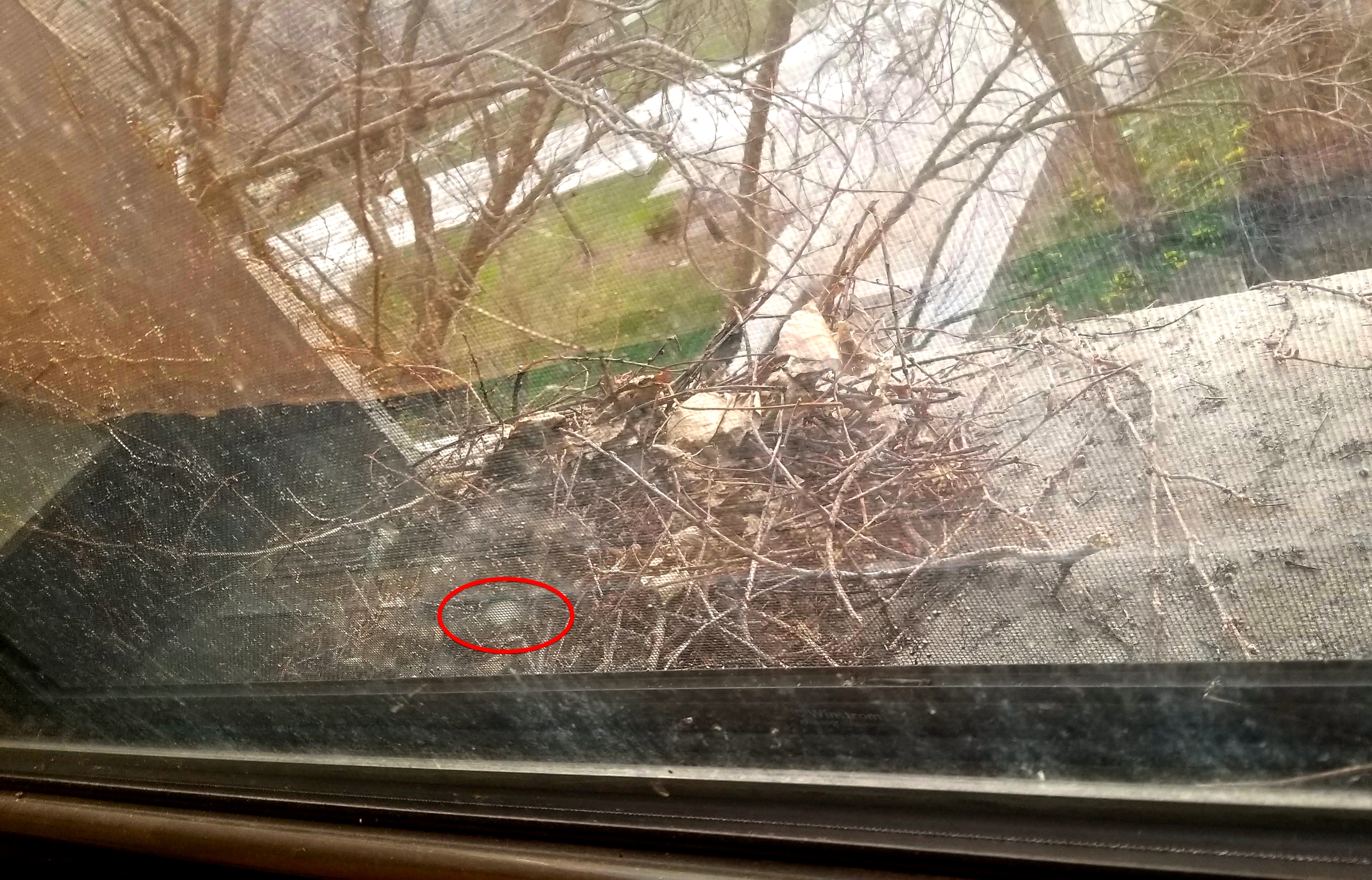 If you live in Iowa, you’d best be careful from now on. According to the Des Moines Register, the governor, Kim Reynolds (a Republican, of course) just signed a bill that gives citizens of the state the right to buy and carry handguns without a permit. It’s bad enough to allow handguns, but allowing that without a permit? That eliminates background checks, previously required to get a permit in the state, as well as any proficiency training. It’s sheer madness.

Speaking of madness among the benighted, recall that back in March I reported about a bill that had been introduced to the Arkansas legislature which would allow creationism to be taught in public schools from kindergarten through grade 12 (the end of high school). You can see the short bill here. According to reader Guy, the legislature’s website, and the Arkansas Times, that bill has now left the House Education Committee will be voted on by the Arkansas House of Representatives. Given that the House comprises 78 Republicans and only 22 Democrats, that the state Senate comprises 27 Republicans and just 7 Democrats, and that the Republican governor, Asa Hutchinson, is a loon who signed a near total abortion ban designed to test Roe v. Wade, I’m not happy about the fate of the creationism bill.

Station KOIN in Portland (of course it’s Portland) reports that a school in the city, Ida B. Wells-Barnett High School, was in the process of ditching its mascot, a Trojan (what’s going on with that?) and replacing it with something that nobody could object to. They chose an evergreen tree, a symbol of Oregon. One rationale:

“Evergreens are characterized by the life-giving force of their foliage, the strength of their massive trunk, and the depth of their roots—in an individual tree and as a forest of trees,” Ellen Whatmore, a teacher and mascot committee member at Wells-Barnett High School said, reading from a resolution. “They provide shelter and sustenance. They have histories that preclude us and will continue in perpetuity after we are no more.”

But the Offended can always find offense. Ida B. Wells was a black activist from Chicago. Can you guess why an evergreen tree might be offensive? Here’s why:

But just before the Portland Public Schools Board of Education’s vote to approve the new mascot Tuesday, March 30, Director Michelle DePass shared community concerns of an unwanted correlation between Ida B. Wells—the historic Black activist, and Pulitzer Prize-winning journalist who documented and crusaded against lynching—and a tree which could conjure up reminders of hanging people with ropes from branches.

The tree mascot is now on hold. Maybe a cloud mascot or something? That couldn’t offend anyone, could it?

The New York Times has an article about the ins and outs of “vaccine passports” for travel or employment. The short take: proof of vaccination can be legal for school or work attendance, and maybe for travel, but we’re not close to having a digital way to prove you’ve been vaccinated. Hold onto your vaccination card! (I had mine laminated.)

Meanwhile in Dobrzyn, Hili is listening to the sounds of dinner (Photo by Paulina):

Paulina: What are you doing?
Hili: I’m listening to the birds’ song 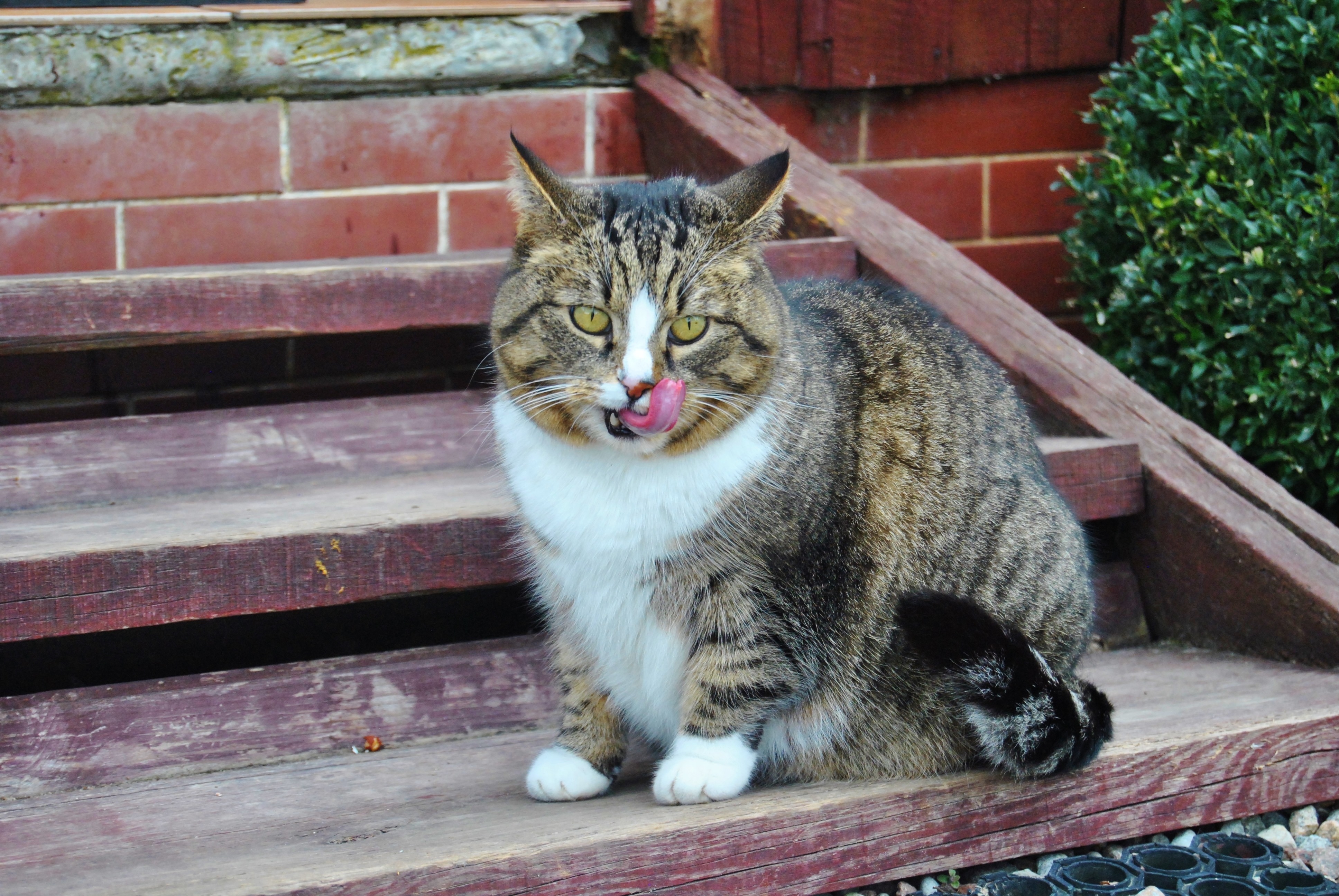 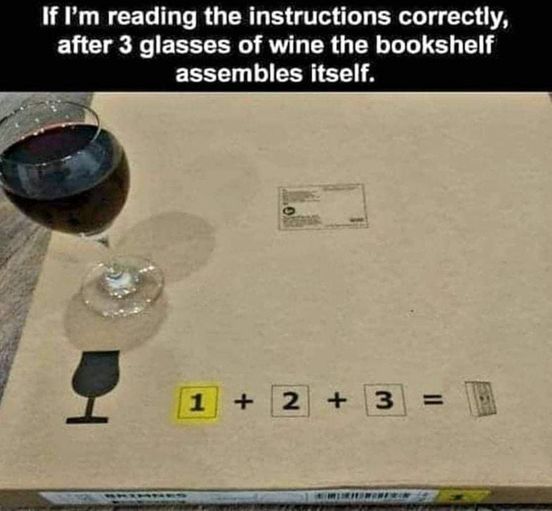 If you’re not watching Ken Burns’s new series on Ernest Hemingway, you should be.  It’s an excellent show, and if you know about Hem you’ll know about his issues, all of which the show discusses frankly. Here’s a relevant meme from Nicole: 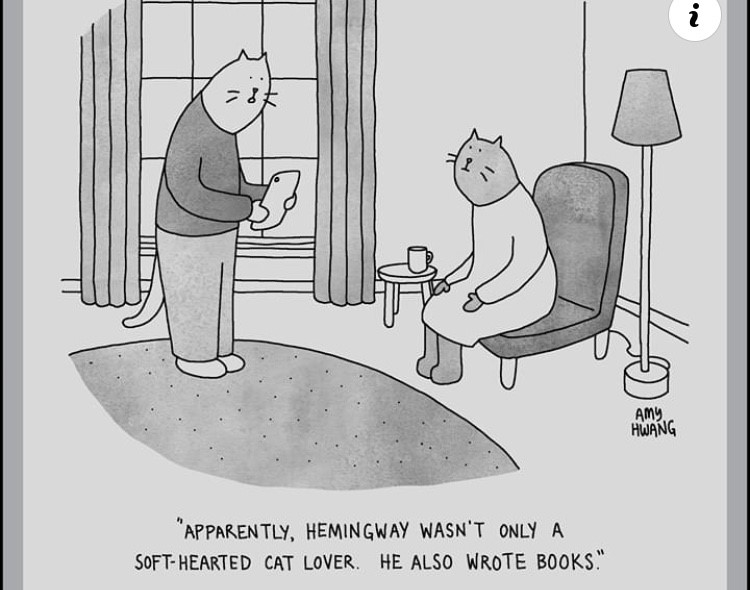 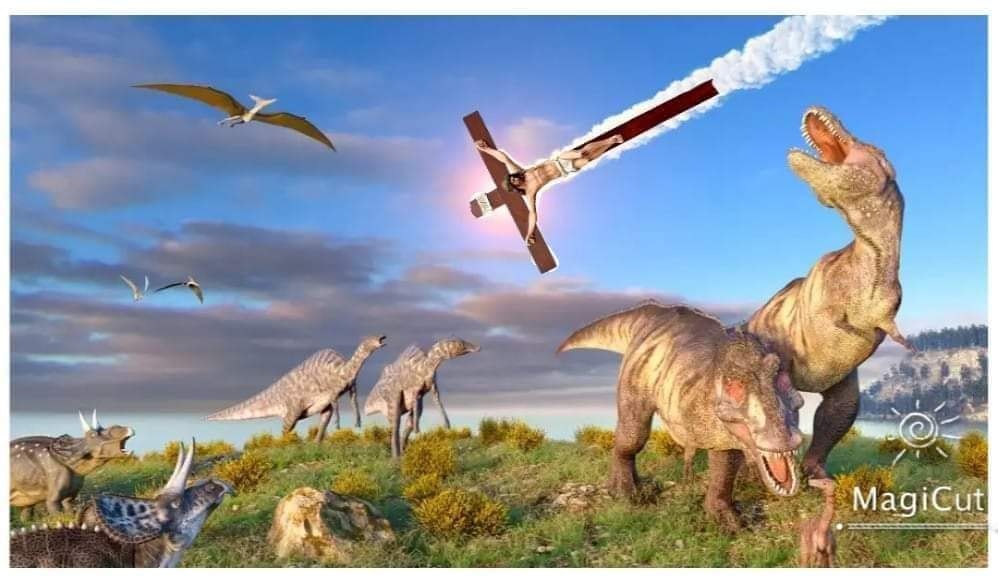 From Gethyn—the cat must touch the fish:

This baby was photographed in colour during the Great War in 1915. The photographer is unknown and the autochrome currents rests with the George Eastman House Collection. If currently alive, the infant would now be 106 years old. A reminder of the transience of being. pic.twitter.com/mIM3gYqotl

but it’s ok a few minutes later as they combine to form a hydra-cat pic.twitter.com/wbeiBlWQbg

Biological facts you need to know:

Combining two remote sensing techniques (#drones and satellites) let us do this on Heron Island reef. And this was a huge underestimate of poop because we didn't include the reef lagoon! @HeronIsle pic.twitter.com/KCNxmCiFf4

I have no idea why manta rays do this. Do you?

Cyclone feeding has only been recorded in reef manta rays (Mobula alfredi). A line of chain feeding mantas begin to loop around until the lead of the feeding chain joins the trailing mantas to form a large circle of feeding animals. pic.twitter.com/MdBIUr9MB4

And a good one:

People who can't differentiate between entomology and etymology bug me in ways I cannot put into words.