Today we have a contribution from Tony Eales of Queensland. His notes are indented, and you can enlarge his photos by clicking on them.

My wife and I did a road trip back up to tropical North Queensland to stay at Port Douglas and visit various places of natural beauty including the 40-million-year-old World Heritage Daintree Rainforest and the remnant isolated rainforest in the Clarke Range with its high degree of species endemism.

While bugs and spiders are my thing, I must say, though, that the vertebrates took a front seat on this trip with some truly fantastic sightings of mammals, birds and reptiles unique to these places, alongside some very interesting arthropods.

We were very lucky to come across two cassowaries (Casuarius casuarius) on our first day in north Queensland. We saw a third on our last day as well. These are wonderful birds to see, particularly because we were in the car rather than on foot. I’m not sure I’d like to come face to face with a cassowary without some barrier between it and me. They’re known as the most dangerous bird in the world and have killed at least two people that I am aware of. There are numerous videos of cassowary attacks on YouTube, this one is particularly alarming. 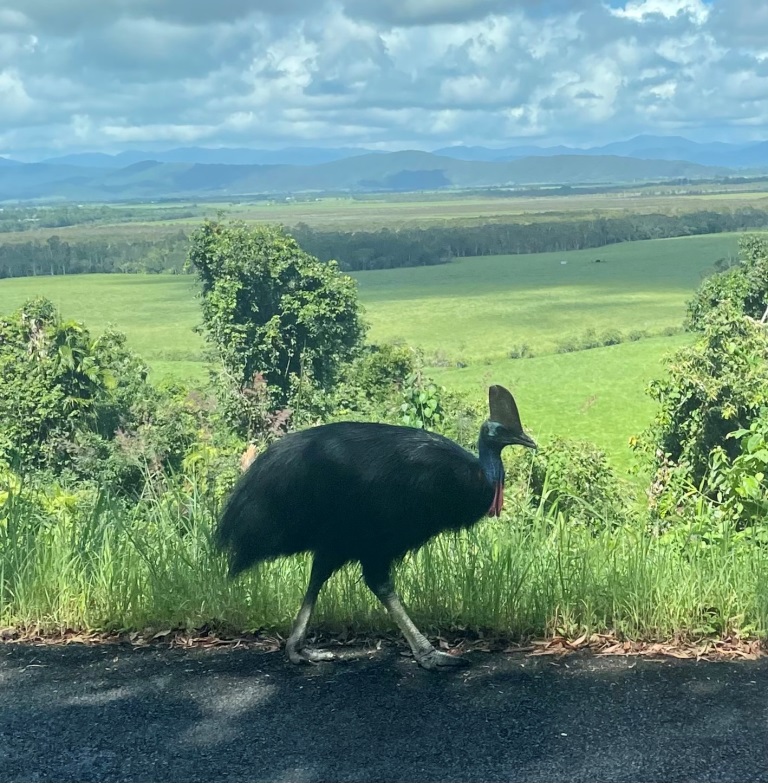 The absolute highlight of the trip and one of my best experiences with wildlife was finding this small family of Bennett’s Tree-kangaroos (Dendrolagus bennettianus) while on a night walk in the Daintree. These are a very rare animal: their ranges is only 70 km north-south and 50 km east-west. They are very quiet and stay high in the canopy. My wife noticed the red eyeshine but they were so far up in the dark it was difficult to determine at first what we were looking at. It was a long frustrating struggle to coax my camera that was set up for insects to focus on and capture an image of these animals. I am informed that this is the first photographic evidence of them living in small family groups. An unforgettable experience. 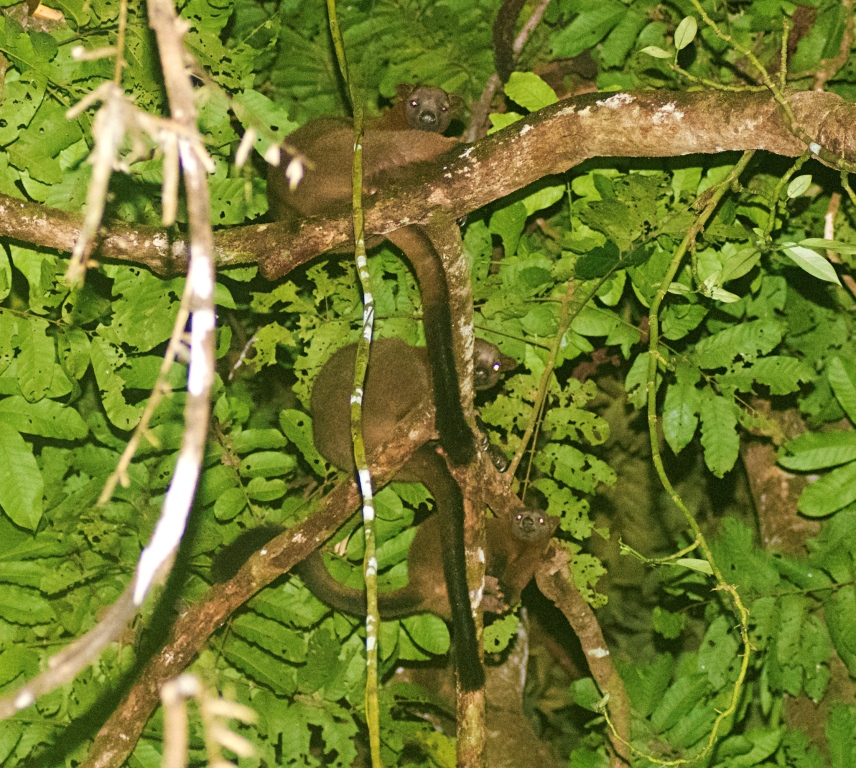 It was a good night for arthropods as well. I found this predatory katydid, the Pink-jawed Katydid (Emeraldagraecia munggarifrons), formally described only in 2012. It was just chilling out on a handrail waiting for something tasty to wander along. 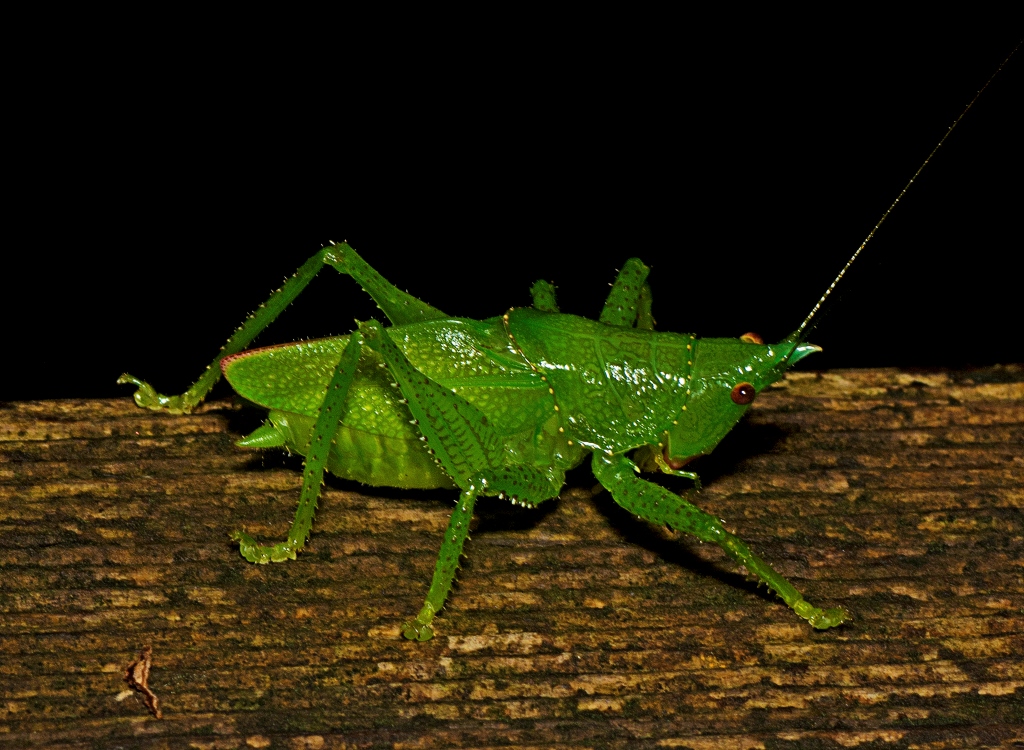 Daytime was amazing too in the Daintree. We went to the Daintree Discovery Centre which had walking trails with lots of informative signage and displays. The best was a tower that took you up into the canopy. Right beside the tower was a huge Black Bean tree (Castanospermum australe) and while looking at the leaves I noticed this giant colourful bug, a Yellow-horned Giant Stinkbug (Oncomeris flavicornis). The bug was the size of a matchbox but only has a tiny head which is apparently typical of this family. 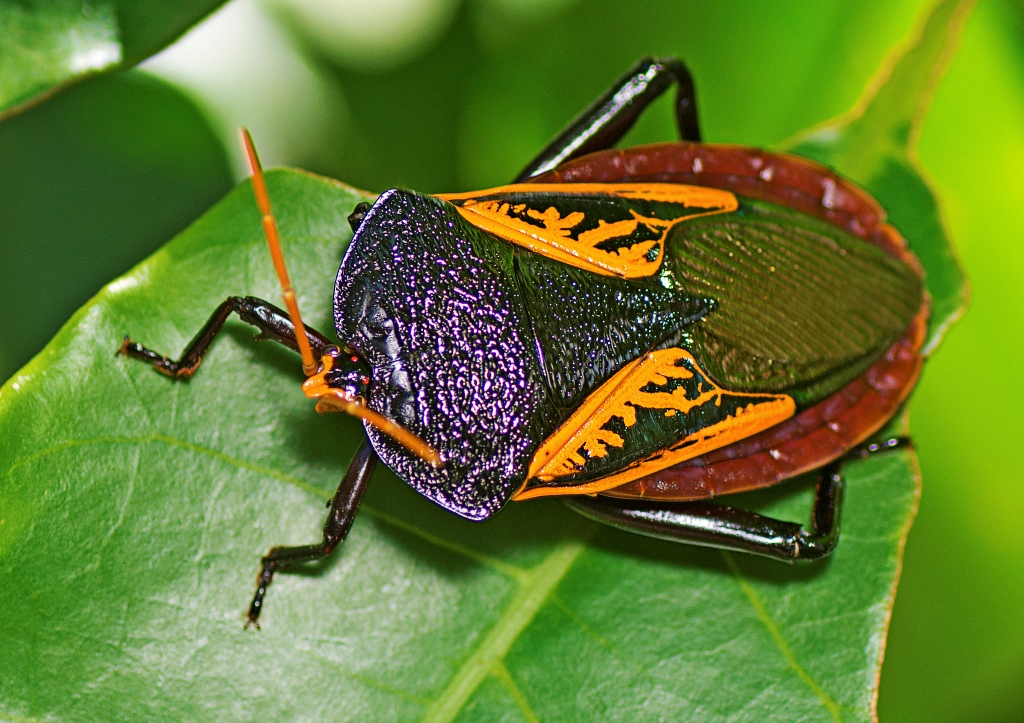 While leaning out over the edge of the railing to try and photograph the bug I noticed this large beautiful longicorn beetle Rosenbergia drouini. As soon as I put the picture up on Facebook, I was inundated with friend requests from beetle collectors asking if I had collected the specimen. This was apparently a very rare find and is not in many collections. 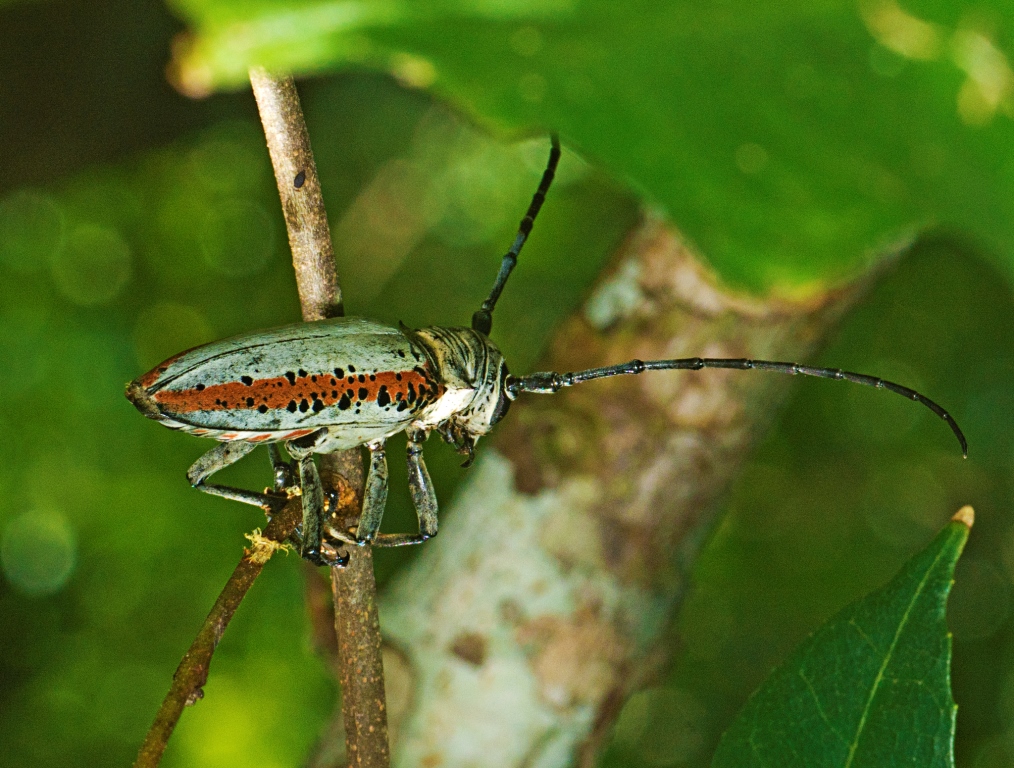 After our time up in the north we took our time coming home and spent a bit of time at Eungella National Park up in the Clarke Range. This rainforest is large but isolated and is recognised as a centre of endemism. I was able to find two of the key endemics while there. The Eungella Spiny Katydid (Phricta zwicka) and the Eungella Leaf-tailed Gecko (Phyllurus nepthys).

JAC: Look at that camouflage! 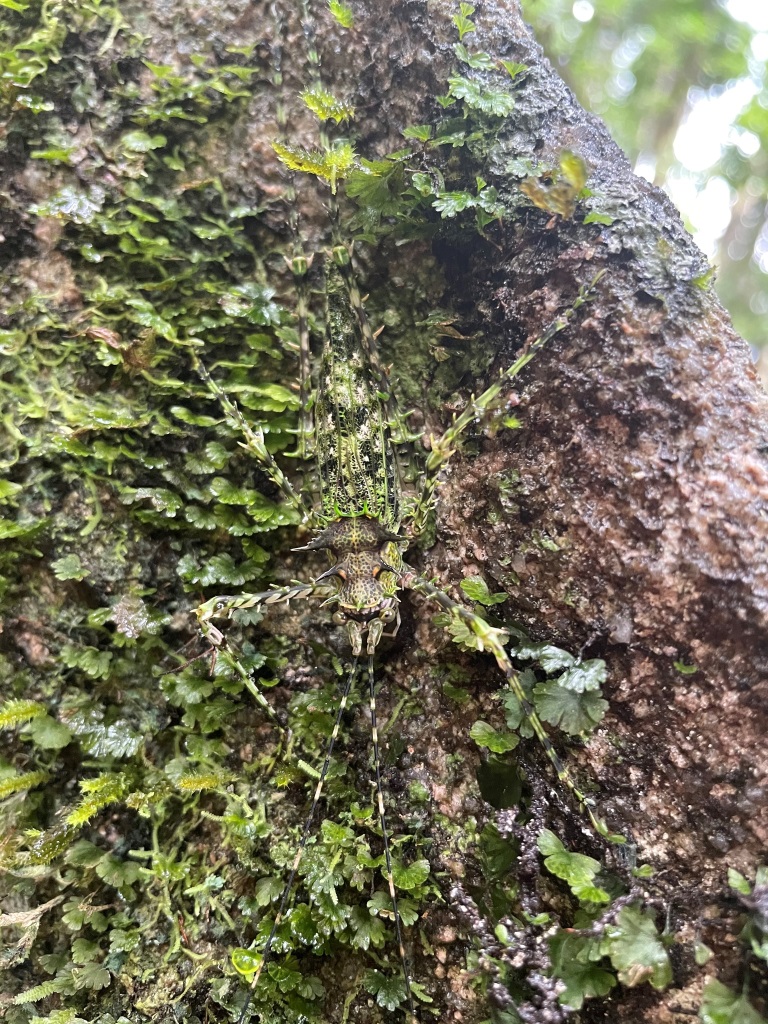 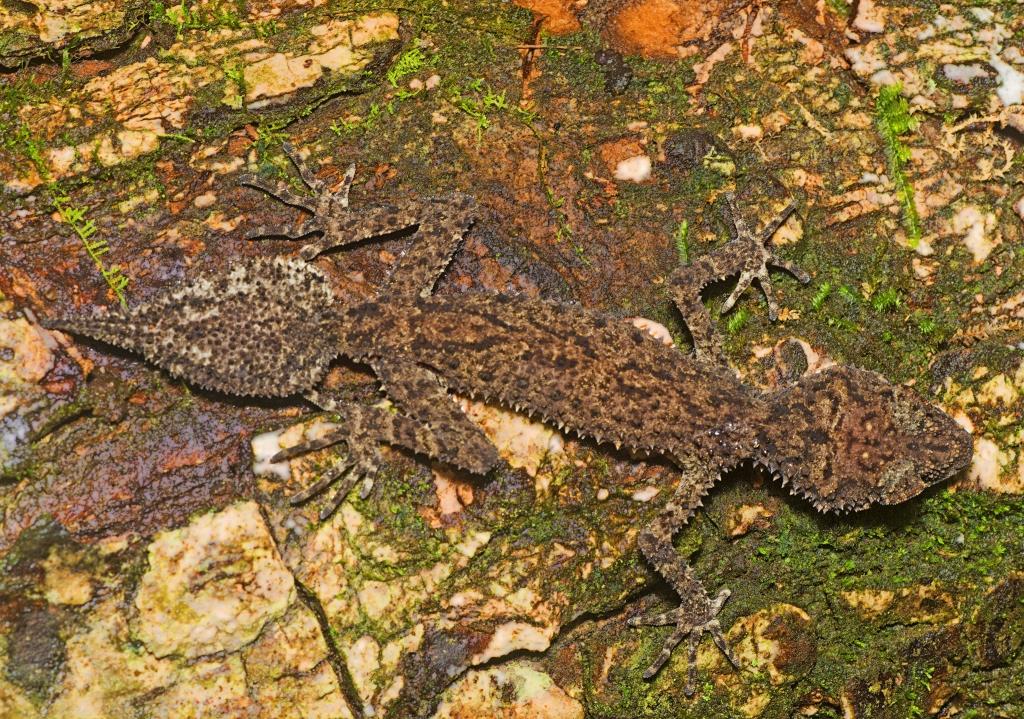 Also, on a night walk in the rainforest I snapped a photo of a pretty moth Ecnomophlebia argyrospila. It turns out that this is the only known live photo that the Australian moth experts I talked to have seen and it’s only known from a single specimen collected in 1927. 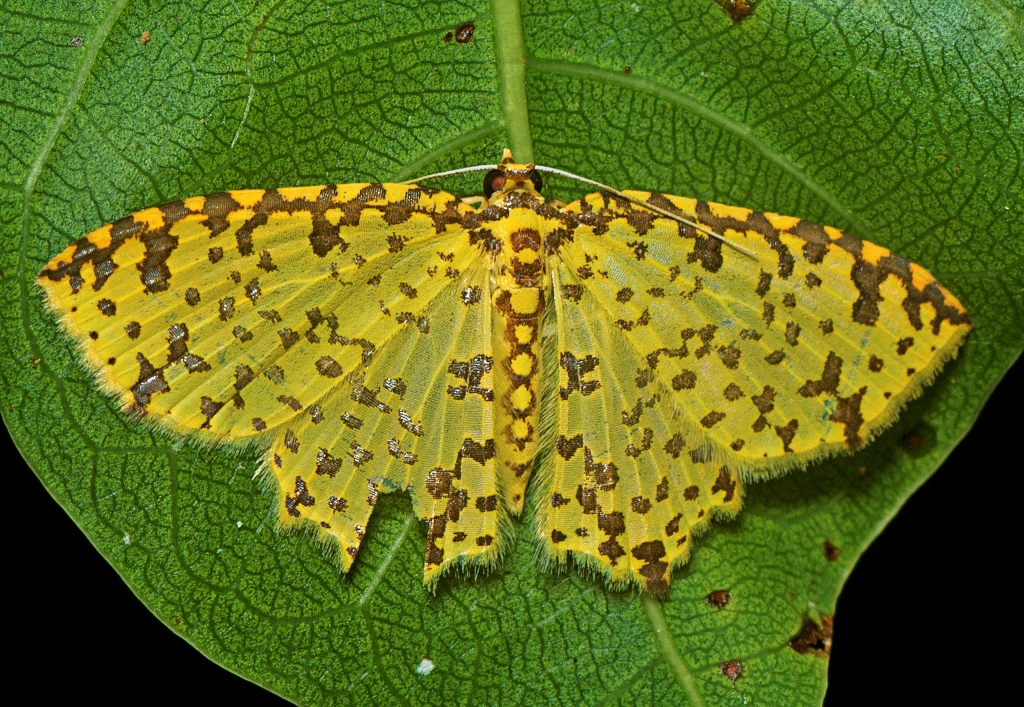 Two other notable endemics I photographed on the trip home were a land snail Pedinogyra cania that is restricted to a single locality called Cania Gorge and the cute Mareeba Rock-Wallaby (Petrogale mareeba) that lives only in the granite hills around the north Queensland town of Mareeba. 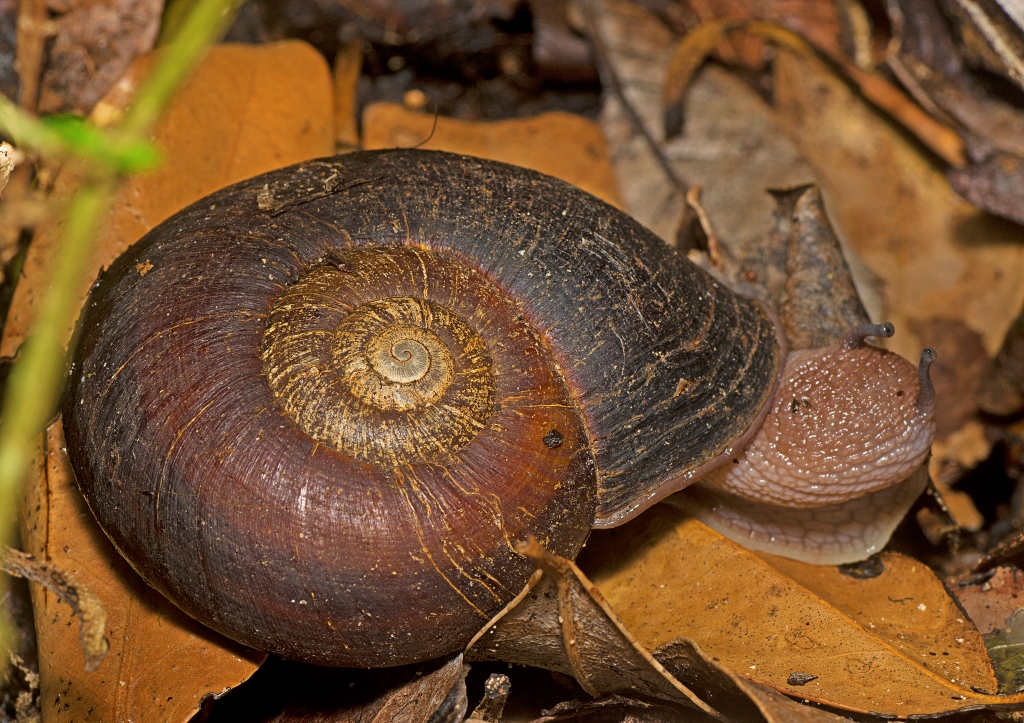 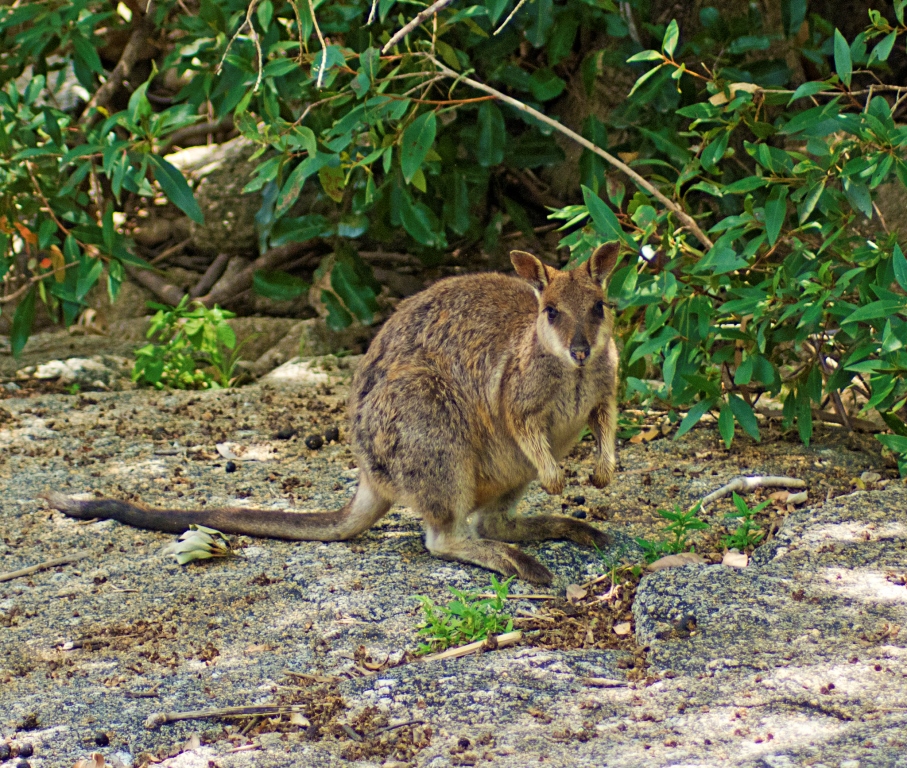