This is not the first time I’ve been asked “how to get rid of fruit flies,” but this time it’s by a reporter for Chicago Magazine in the article below.

The first thing I had to ask when they queried me, was “what kind of ‘fruit flies’ are you talking about?” For the true fruit flies, the tephritids that endanger California’s fruit industry (that’s why you get inspected at the state border), aren’t a problem to homeowners.

What the reporter was asking me about was what geneticists call “fruit flies” but are better known to entomologists as “vinegar flies”. These are in the sister family Drosophilidae, and are the familiar Drosophila used in the lab. When you see little yellow flies buzzing around your fruit bowl, they are drosophilids, most likely Drosophila melanogaster or D. simulans.

And Drosophila are harmless, except to winemakers, and only because they’re attracted to the smell of alcohol and fly into the wine vats to die a happy death. (Flies love the smell of alcohol, as it denotes their real love, rotting fruit, in which they lay eggs.) Winemakers use pyrethrins, a fairly harmless pesticide derived from chrysanthemums, to control them.

If you see Drosophila buzzing around your fruit bowl or a glass of beer, don’t kill them, just shoo them away. They shouldn’t be breeding in your house unless you have a bunch of rotting fruit that’s sitting around for 12 days or so—and who has that?

(When I lived in Davis, I was called by a bar in Sacramento that really did have a Drosophila problem. A quick investigation showed that there was a huge bin of leftover, rotting lemons and limes from the bartender behind the building, and that was the source of the flies. For solving that problem, I got free drinks!)

But a reporter from Chicago Magazine was interested in how to get rid of them, along with three other “problems”: hiccups, alley rats, and hangovers. Somehow I was picked to be the fruit fly expert, and here’s my answer (click on the screenshots below to see the others, each with a different expert: 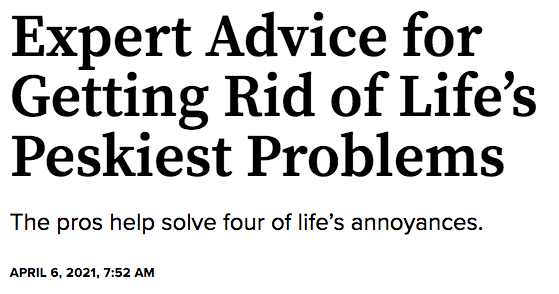 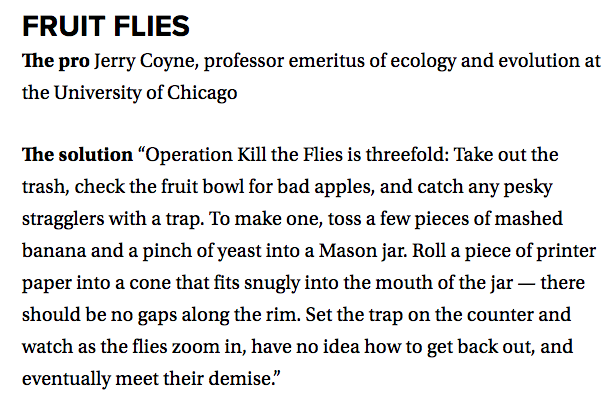 Well, this is advice for those with dipteraphobia. If you see fruit flies, just gently shoo them outside!