We’ll have a series of short takes today, as I’m unable to brain. Bear with me. Several of the items may be about race (I haven’t yet decided what to post), but of course that topic is now foremost in America’s consciousness.

The headline from the Times of London below is deeply misleading, implying that a white translator doesn’t want to translate the poetry of Amanda Gorman. Gorman, of course became famous after reciting her poem “The Hill We Climb” at Biden and Harris’s inaugural. Truth be told, I found her poem superficial and trite (as I’ve said, this kind of verse doesn’t strike me as real poetry), but she’s only 22 or 23.

Regardless, the headline is just wrong. What the title really means is that a well known Dutch writer had already been commissioned to translate Gorman’s Inaugural poem, and had done so, but then they (note below) withdrew from the project after criticism that a white translator shouldn’t deal with the poems of a black woman.

The translator is Dutch author Marieke Lucas Rijneveld, who won the International Booker Prize at 29 for their novel (Rijneveld uses plural pronouns) The Discomfort of Evening. Because the Times is paywalled, I’ve put the details below, but if you have access you can see the article in this screenshot. 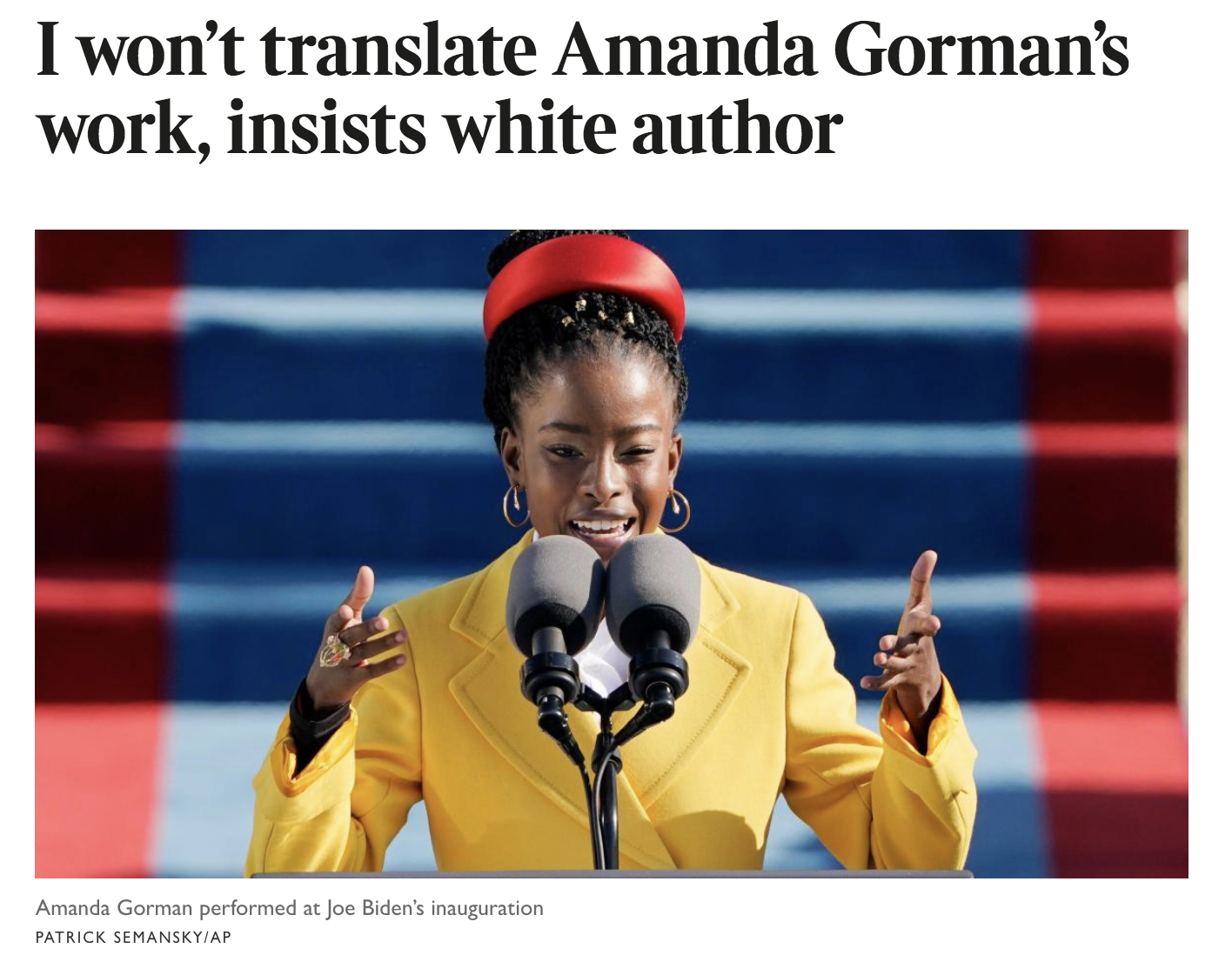 “We will not be turned around or interrupted by intimidation,” the 22-year-old American poet Amanda Gorman proclaimed in her celebrated performance at President Biden’s inauguration last month.

Yet this appears to be precisely what has happened to the author chosen to render Gorman’s poem into Dutch. Marieke Lucas Rijneveld, 29, the youngest person to have won the international Booker prize, has pulled out of the project after critics suggested that it was inappropriate for a white person to translate an African-American poet’s works. Rijneveld’s translation of The Hill We Climb was due to be published on March 20 by Meulenhoff, a publisher in the Netherlands.

Janice Deul, a Dutch cultural activist, said an opportunity had been missed by handing the contract to Rijneveld. “She . . . has no experience in this realm but is still, according to Meulenhoff, the ‘dream translator’,” Deul wrote in the newspaper Volkskrant.

Yesterday Rijneveld renounced the deal, saying: “I understand people who feel hurt by Meulenhoff’s choice to ask me.” The publisher said it “hoped to learn from the experience”.

De Telegraaf, a conservative newspaper, said that Rijneveld had “kowtowed to woke activists”.

Well, first note the publisher’s contrition, as if it had done something wrong. Or maybe it just learned to commission only translators of the same gender and ethnicity of the author they’re translating, and if you don’t do that you’ll get into trouble.

But you don’t have to be a critic of Wokeism to question what kind of mentality finds a white person unfit to translate the poems of a black person, or vice versa. Is Gorman’s poem (see link above), somehow so deeply infused with the black experience that only a black translator could do it justice? I don’t think so; read the text and see for yourself. (My German is good enough to translate it into that language, but I wouldn’t risk it.) Moreover, the prose is simple and would seem to be well within the ability of any writer fluent in both Dutch and English and who writes very well (nearly all Dutch people are fluent in English!).

Tell me if my view is off base, because of course Gorman’s poem deals with racism. But I think Deul’s objection is wrongheaded, representing a view that members of a given race are simply the only people who can translate works written by members of that race. This implies, of course, that there is a homogeneity of experience and thought, including artistic thought, within races that makes such a move necessary. Would a black translator, according to these lights, be unfit to translate the poems of Sylvia Plath? Yet reading Ibram Kendi’s How to be an Antiracist (I’m almost done), I see that this view is diametrically opposed to Kendi’s own claim that there is no such thing as “black culture.” (It’s actually hard for me to guess what Kendi would say about this translation, as he sometimes takes contradictory stands in his book.)

At any rate, this event really nothing new, as we know from the use of “sensitivity readers” for young adult literature. Still, I find it sad to think that people of one background can’t empathize with those of another sufficiently to translate a poem. But that seems to be the way the world is going.