Well, this is from HuffPost, but we’ll ignore the source. It’s an article called “60 of the Funnest Tweets About Cats and Dogs this Year“, the year being 2020. I’ll show only the cat tweets, of course, and only a half dozen.

What kind of surgery would require shaving the distal front legs? I hope it’s not DECLAWING!

please look at this picture of my friend’s cat who had to get shaved for surgery pic.twitter.com/RZNPUyXJZX

My husband set up a motion sensor sign that lights up when my cat poops….please hire him, he has too much time on his hands pic.twitter.com/gS9VH0Nz6T

When you work from home and your manager wants a word with you pic.twitter.com/XyapLRa5S7

This BBC story is about a woman who started letting in and feeding a British shorthair who actually belonged to someone else (click on the screenshot). 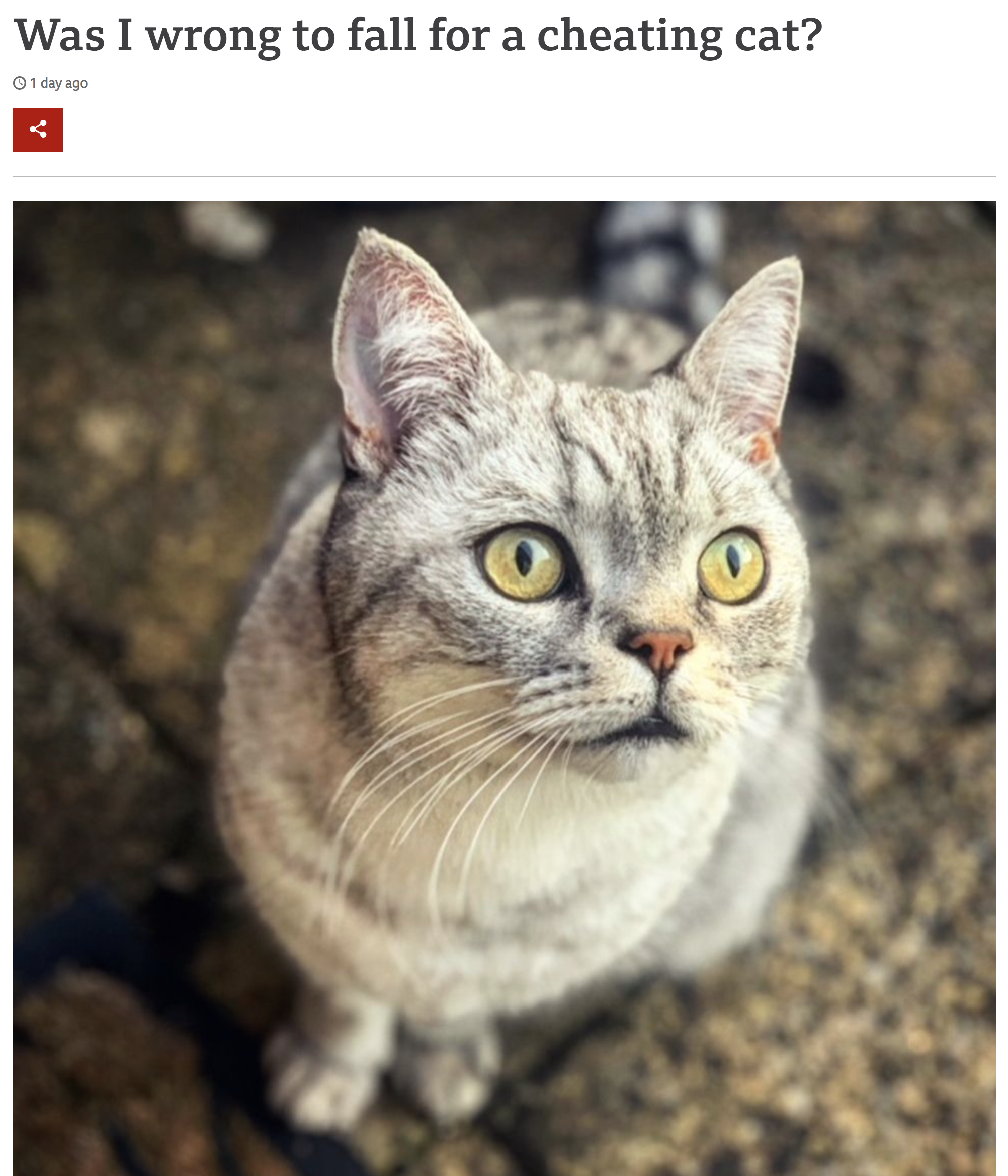 The cat was a cheater, and the author, Anisa Subedar, even mentions one of my favorite children’s books about another cheating cat. You should get it for your kids (I own a copy).

Much later, I discovered there is a book about this.

Originally published in 1990, Six Dinner Sid is a children’s book that tells the story of a cat called Sid, who lives at number one Aristotle Street. But Sid also lives at all the other houses on the street and eats at all the homes, whose owners all believe Sid belongs to them.

Unlike the real cats described by Celia Haddon, Sid knows very well what he is doing. But his manipulative plans unravel when he gets sick and the neighbours discover they’re all being played.

Author Inga Moore tells me it was based on a black cat she knew when she lived in north London.

“I heard someone call him by a name which sounded like Sid,” she says. (In fact his name was Ziggy.) “Sid used to come in through the cat flap and make himself at home at number four where I was living. I think his home was number six. Sid in the book was very much Sid in real life and he was the inspiration for the story, which is of course made up.

The cheating cat eventually moved away, and Anisa was heartbroken when the real owner, David, told her this and advised her to get her own cat. So she did the only thing she could:

As the days got shorter and this year started drawing to a close, David’s words about getting a cat resonated hard. I hadn’t realised how much I needed the comfort of something purry and furry on my lap to soothe me during a time of such uncertainty.

So, in anticipation of a winter of discontent, a few weeks ago I picked up a 12-week-old British Shorthair. He’s the colour of a latte and goes by the name of Horace.

I really don’t plan to share Horace with anyone but as I’ve learned, that might not be entirely my decision so if you see him around, you know what to do.

This is a sweet (and true) story, and you can follow Horace, as he has his own Instagram page. Here he is; isn’t he a beaut?

From the Torygraph via yahoo! news, we have the story of ailurophilic Muscovites who rescue cats beleaguered by the Russian winter (click on screenshot):

Ramil, who asked his last name to be withdrawn for security reasons, is not a builder but a volunteer making rounds to rescue cats trapped in the basements of Soviet-era blocks of flats which often serve as the only shelter for stray cats in winter’s cold.

Russia is a world beater when it comes to cat ownership. A GfK poll in 2016 showed that 57 per cent of households have at least one cat, the world’s highest.

Russians have only recently been waking up to the reality of stray cats, estimated at hundreds of thousands in Moscow alone, who badly need shelter as temperatures in the capital typically stay below zero for the most part of winter.

In a major victory for cat lovers, Moscow’s parliament this autumn secured a decree by a deputy mayor, ordering all apartment buildings to provide an unfettered access to basement vents for “small pets” and threatening with sanctions for non-compliance.

But not every suburb has this provision, ergo the activists:

On a recent afternoon The Sunday Telegraph joined Ramil on a secret visit to the satellite town of Zheleznodorozhy where utilities companies persist in putting bars on the vents, robbing strays of the only reliable winter shelter.

Guided by local women who appear to know every stray cat in town by name, the activists went around several addresses in the sleepy, snowcovered neighbourhood to inspect the vents.

As pincers failed to snap the bars on one window, Ramil, lying on the concrete walkway around the basement, took out his circular saw and went at it, sparkles flying around.

The activists quickly retreated, anxious to avoid unwanted attention from the police.

There’s a lot more, to read, but here’s are two photos (both by Alexander Zemlianichenko Jr for The Telegraph): 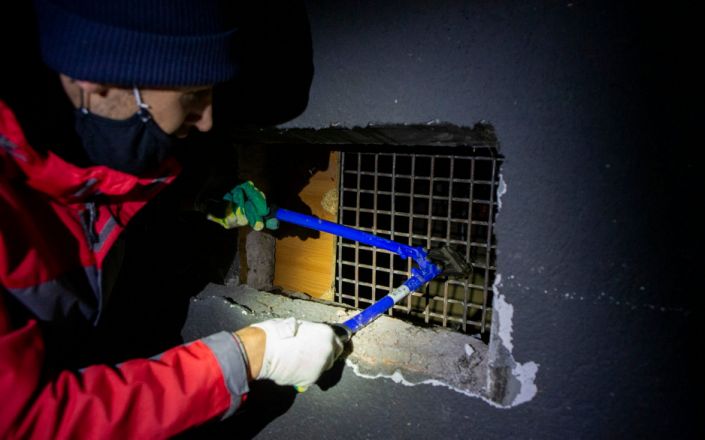 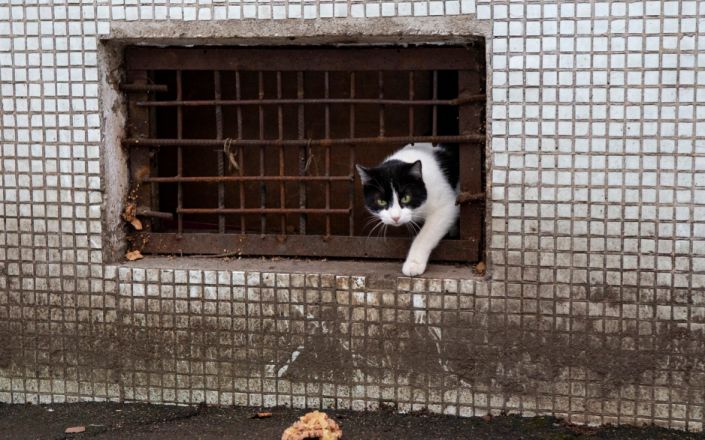