A lot of people don’t like Quillette because they consider it an “alt-right” site.  That’s not true: it’s a “contrarian” site that publishes stuff that’s often critical of the extreme or authoritarian Left. And I have to give kudos to editor Claire Lehmann for building up the site from nothing to a go-to site for those who are generally liberal but can’t stand wokeness, censorship, or authoritarianism. While there’s some plonk on the site, there are also a lot of good reads.

The site isn’t full of Nazis or white supremacists, so I was baffled to get a mass email from Claire declaring that Quillette has been banned from Facebook. An excerpt:

As you may have heard, Facebook has blocked Australian users from viewing or sharing news content on their platform. The mass-blocking is in response to new media laws proposed by the Australian Government which would mean that digital giants such as Facebook are required to pay for news content.

I have been critical of the proposed media code. We did not expect to benefit from it at Quillette, and we generally take a neutral position on battles between legacy media corporations and multinational digital giants.

But in resistance to the proposed laws, Facebook has now blocked Australian news sites, and Quillette has been included in the wide net that has been cast. Our Facebook page has been wiped and our links are blocked on the platform. If you would like to share a Quillette article on Facebook you will be unable to, even if you live outside of Australia.

Currently, Facebook is our third source of traffic referral, with the platform having sent over six million readers our way since our inception. Losing this stream of traffic is a significant and unexpected blow, and it will impact our revenue.
Other Facebook pages have also been caught in the dragnet. Australian Government Health Department pages, local Fire and Rescue services, weather services such as the Bureau of Meteorology and academic forums such as The Conversation have all been blocked. This is clearly a ham-fisted response. The proposed code has not been passed into law, yet Facebook is attempting to manoeuvre the Australian Government into submission.

The article referred to in Claire’s tweet is from Bloomberg Technology, and refers to a proposed law requiring sites like Facebook and Twitter to pay news sources when displaying their articles. That would mean, for instance, that if somone shared a news article on Facebook (including the news source itself, many of which share articles on Twitter), Facebook would have to pay that news source. That, of course, is insane, because it’s free publicity from the social-media site and if the news site charges for access, like the New York Times, readers would still have to pay to read an article.

Apparently Google and Facebook objected, and succeeded in securing an “arbitration panel” that would decide how much compensation should be given to the news sources.

But I’m still puzzled as to why Quillette, which isn’t really a “news source”, and doesn’t share direct links to news sources (save as hyperlinks in the text), was blocked—along with first responder and weather pages. Who’s running the railroad Down Under?  At any rate, some folks won’t be able to share Quillette links on Facebook (I’ll try doing it myself) until this blows over. In the meantime, Claire has asked for donations to the organization, and you can follow her personal Facebook page.

I just did an experiment trying to share a Quillette link on Facebook, and it worked (see below). I guess only Australian users can’t put up posts like this: 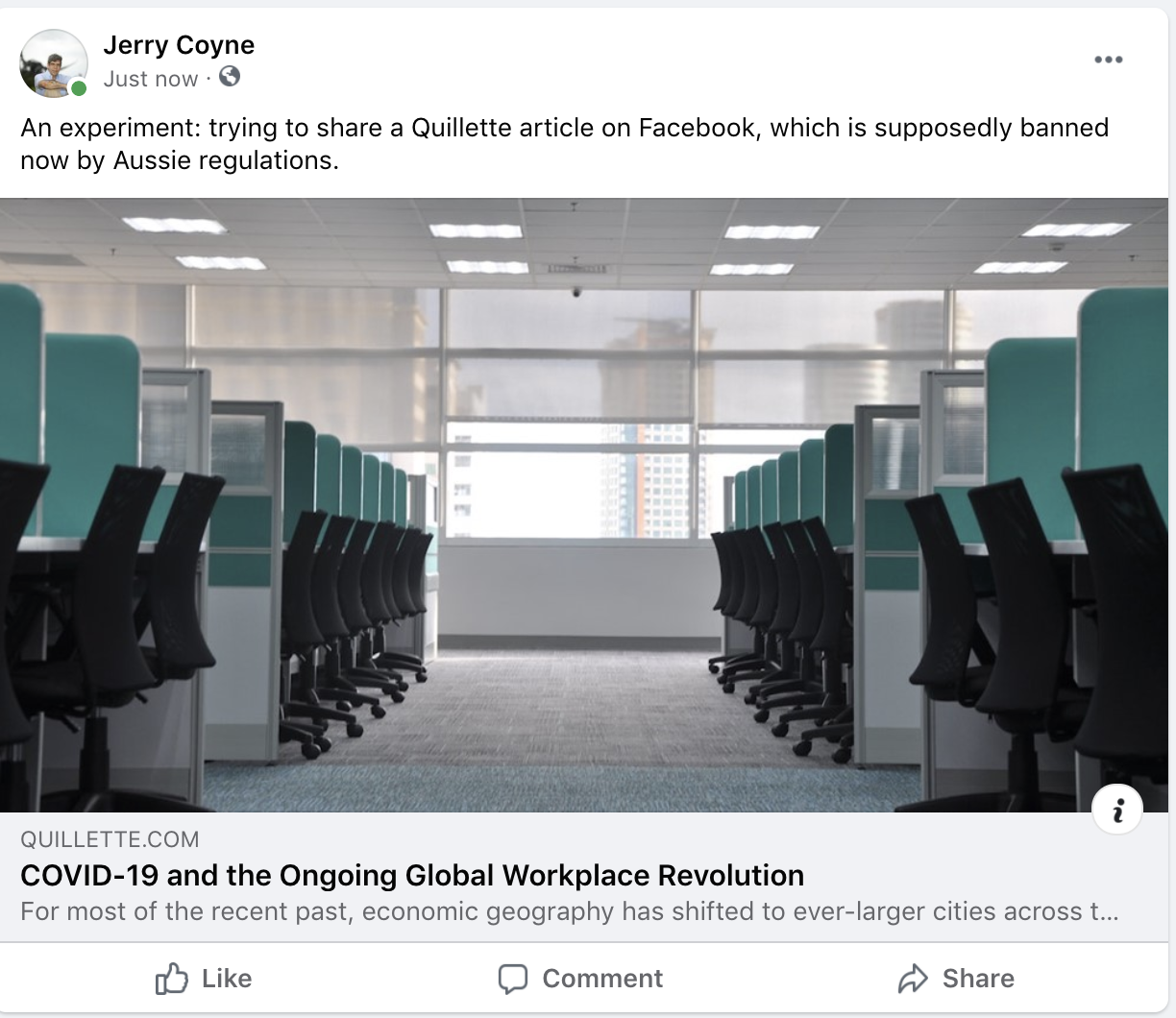