There are three species of wombat, and all of them produce cubic poop. No other mammal can do this.  Voilà: 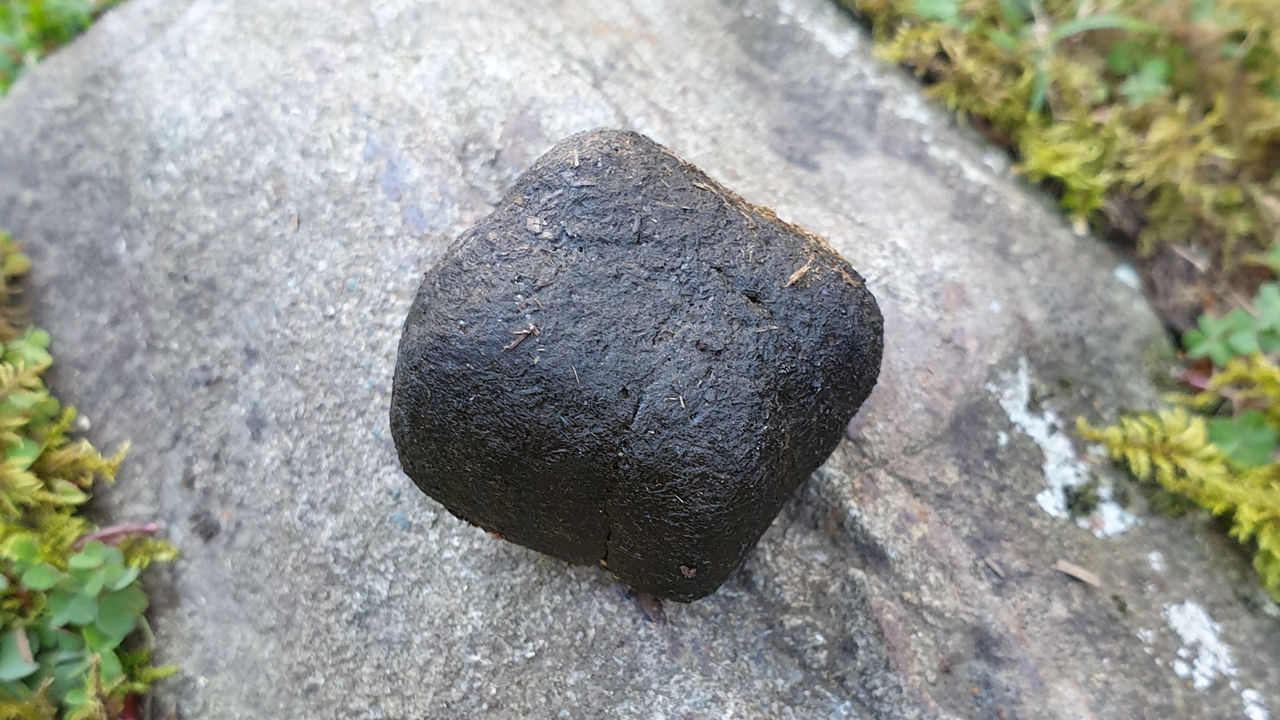 Now when you ask yourself “Why do wombats poop cubes?”, there are two ways of getting an answer. The first is the proximal explanation: what physiological and mechanical aspects of wombat digestion and excretion turn the ingested vegetation (they’re herbivores) into cubes? That’s the question the new paper below addresses (click on screenshot). The authors, a consortium of American and Aussie scientists, don’t really answer that question definitively, but at least suggest some approaches.

But the second way of answering it, which I find more interesting, is the ultimate explanation—the evolutionary one. Given that these species are the world’s only mammals with cubic poop, what is the evolutionary advantage of doing that? Of course, cubic turds may not be a directly adaptive trait; it could be an epiphenomenon or a byproduct of some other trait. Maybe wombats have square buttholes! The authors do in fact address that question (see below). But let’s see if there’s anything about having cubic scats that might be useful to a wombat. More on that in a short while.

The paper is at the first screenshot below, the pdf is here, and the full reference is at the bottom of the post.

If you have the mentality of a teenager, you’ll find the journal where this was published amusing: 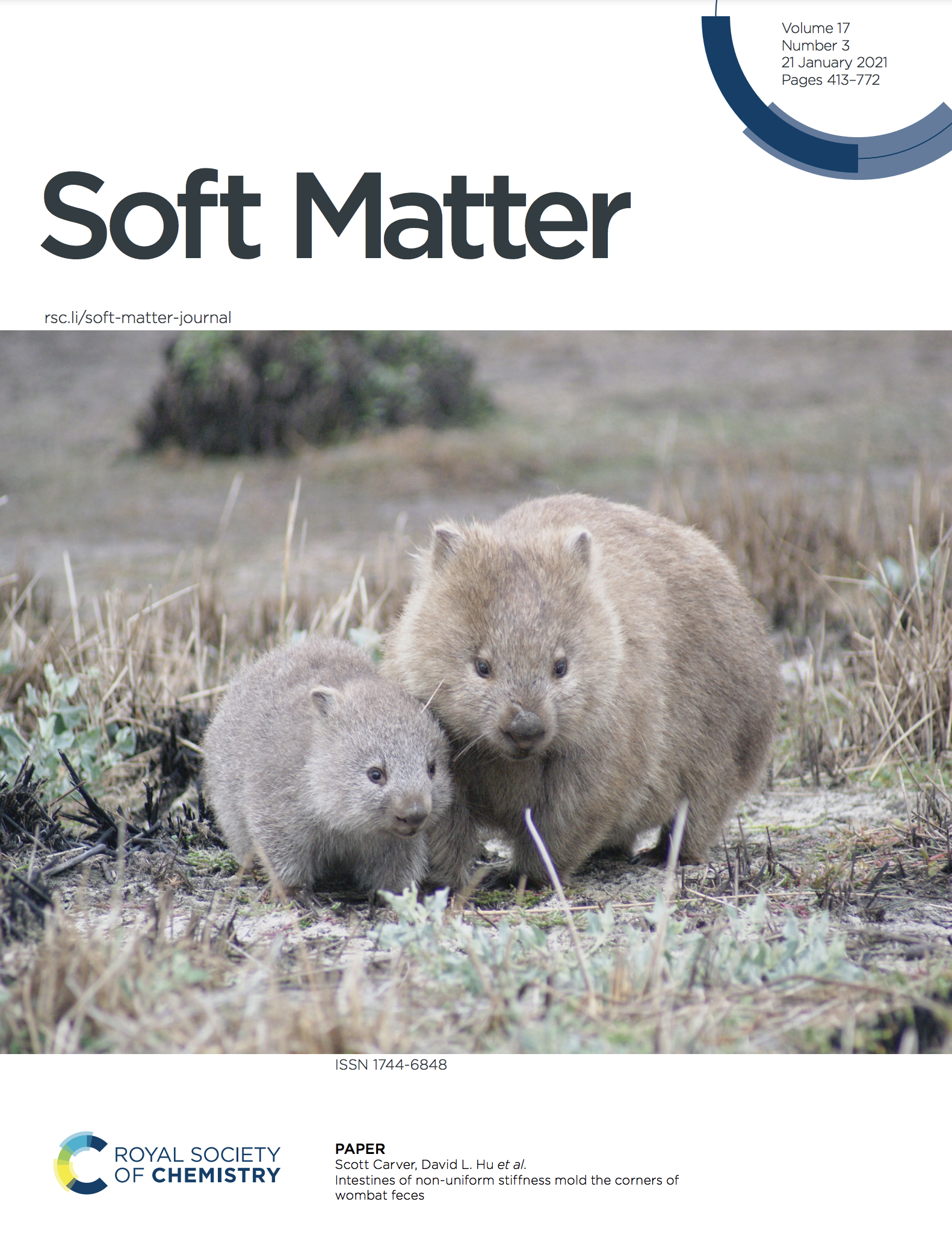 Before we look at the model, we can dispose of one hypothesis: wombats have cubic poop because they have square buttholes. This is the “pasta theory”, which is that the soft, pliable feces would assume the shape of the extrusion opening. The authors reject this hypothesis in one of the more amusing parts of the paper:

Note that there are videos!

But I don’t understand why the authors couldn’t just lift the creature’s tail to see if it has a square anus. I guess that would be unsophisticated.

Here’s a picture of the species they studied, the bare-nosed  or common wombat (Vombatus ursinus). It produces about 100 cubic turds per day, many of them deposited on “latrines”: logs, rocks or rises that harbor the scats of five or more individuals, giving a clue to why the feces may be cubic (more later). A) shows the adorable creatures, and b) a latrine. Photos c) and d) show the production of the separated cubic turds in the long intestine, with the anal (distal) end to the lower right in d). Look at all the poop lined up, like planes queueing to land at O’Hare!

At any rate, let’s proceed to the intestinal dynamics.

The authors dissected three euthanized wombats that had been badly injured by cars, and found that the herbivores have long intestines that alternate between stiff sections and softer sections of muscle.  They then made a model in which poop would traverse areas of soft versus hard intestine, and be squeezed more in the latter bits. They also made a number of assumptions about the elastic properties of wombat turds, including “Reynolds numbers”, strength of contractions, and so on, producing a series of Fecal Equations. They also had to construct an index of “turd squareness” to see how the various squeezings of the feces, which would also extract water, making them hard, would result in cubes.

The upshot is that they could get approximately square shapes with just 10 rounds of intestinal squeezing, but didn’t try to model the estimated 100,000 bouts of squeezing that each turd actually experiences in the gut. But the result depend critically on the assumptions, like the “Reynold’s number” (a flow parameter) of the feces. Not knowing these parameters, all they can say is that in some simulations under some assumptions, they can get squarish turds, but not necessarily ones as square as the wombats actually produce.

But the more interesting issue is “why do wombats want to produce cubic turds?”, remembering that I’m using “want” here as shorthand for “what is the adaptive advantage (if any) to a wombat that poops cubes instead of the normally-shaped turds of its relatives (and ancestors)?”  The authors mention two hypotheses, which aren’t mutually exclusive:

1.) Cubic turds don’t roll off of the latrines. Latrines presumably are either territorial markers or ways of informing groups of “who’s in the group?” If you poop on a latrine, you want your poop to stay put, and cubes will do that better than spheres or log-shaped turds. The authors even did experiments with dough balls, showing that if dropped on an incline, cubical doughballs roll significantly shorter distances than do spherical ones. I like this hypothesis. Once wombats evolve the habit of putting their poop in given spots as a territorial or olfactory marker, then selection might act to favor those individuals whose turds tend to stay put when deposited.

It is possible that the feces’ cubic shape increases the surface area so that it can facilitate olfactory communication. Elevated scent-marking is a common behavior in many mammals and is hypothesized to increase scent dispersal and visibility. The purpose of scent-marking is typically territorial, however there is evidence that feces are also used in social communication or communicating reproductive status.

And it is true that cubes do have a higher surface area to volume ratio than do spheres (for a unit volume, a cube has the surface area of 6 compared to 4.83 for a sphere. (Tetrahedrons are even better, but presumably would be hard to form!).  But you’d have an even higher ratio if you pooped out a ton of very small turds, like a rabbit, or laid down a ribbon of feces, with a large surface area and small volume. On the other hand, a greater surface area means that you dry out faster, and with it the olfactory cues diminish. The authors don’t discuss the possibility of such a tradeoff.

I don’t think that this second explanation is on the mark, as I can’t imagine the marginal advantage of having more squarish turds can give you that much of an “olfactory advantage.” (But of course evolution works on very small margins, so I may be wrong.)

At any rate, the evolutionary hypothesis seems easier to investigate than the one that requires dissection and modeling. You could, for example, change the shape of wombat poop after it’s produced and see what, if any, changes occur in social interaction, odor profile and strength, and so on.

As the papers say, “There is much work to be done,” though I don’t think I want to be the one to do it!

32 thoughts on “Why do wombats poop cubes?”