I’m suffering vaccine side effects today, so posting will be light. But I should be right as rain by tomorrow. I am at work, but not firing on all cylinders. Bear with me.

The University of Chicago is famous for its principles of free expression, which include the Report of the Committee on Free Expression pledging “commitment to free and open inquiry.”  The Chicago Principles, as they’re called, have been adopted by about eighty American universities, and are a point of pride for our school. (They simply mirror the courts’ construal of the First Amendment on our private campus, which needn’t adhere to that Amendment.) The Foundation for Individual Rights in Education (FIRE) ranked our University #1 in the 2020 Free Speech Rankings.

But lots of students aren’t too keen on the Chicago Principles. The one below, who wrote an op-ed in the student newspaper, the Chicago Maroon, would have us abandon those principles. It’s the usual argument: “free speech” enables “hate speech” and racism.  But the problem with the anti-free-speech stand, so prevalent these days, is glaringly obvious in her piece. Click to read it: 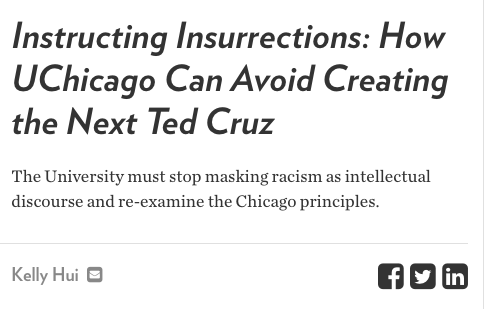 Ms. Hui is in fact a rising student leader, even as a first-year student. She interned for Elizabeth Warren, worked for Planned Parenthood, and is part of an organization on campus that connects students to politicians. In other words, she’s likely to be influential after she graduates. She’s clearly on the Left, which makes it even more worrisome that she is so adamantly opposed to free speech, which is traditionally a position of the Left.

And yet Hui’s also fallen victim to the anti-First-Amendment virus, seeing students as malleable automatons subject to being swayed by “hate speech” and bigotry. Her solution: make herself (or someone like her) the arbiter of acceptable speech, ban those who purvey “hate speech”, for students should not be allowed to hear that stuff, and scrap the Chicago Principles—and probably the First Amendment as well.

Like most liberal arts schools, the University of Chicago is liberal, with, I’d guess, 90% of the faculty falling on the Left end of the spectrum.  But, observing that both Josh Hawley and Ted Cruz went to Ivy League schools (Stanford and Yale Law for Hawley, Princeton and Harvard Law for Cruz), Hui concludes, for reasons that baffle me, that these two quasi-insurgents were the product of a liberal education deliberately designed to turn young people into Nazis and Klan members. Do I exaggerate? Read this (my emphasis):

It is not that [Hawley and Cruz’s] education failed them—their education did exactly what it was meant to do. It prepared two budding conservative minds to go forth into the corridors of power—to disguise bigotry as love of country, hate speech as meaningful debate. You see, despite constant claims to the contrary, elite institutions are not liberal bastions that engender “woke” minds; rather, they propagate white supremacy by justifying racism as intellectual discourse. The University of Chicago is no stranger to this phenomenon—in fact, with its “Chicago principles,” our school has become a leader in framing hateful rhetoric as par for the course in the pursuit of free speech. These principles bolster and enable the next Ted Cruzes and Josh Hawleys and harm marginalized students, who are told that their rights—their very humanity—are up for debate.

If Chicago is turning out people like Ted Cruz and Josh Hawley, it’s escaped my notice. Yes, we have a beleaguered titer of conservative students (they’ve founded their own newspaper, the Chicago Thinker), but they’re not white supremacists. I haven’t seen any “hateful rhetoric” on campus so long as I’ve been here—that is, unless you construe speech about abortion or the Israeli/Palestine situation as “hate speech.”  If Hui is simply objecting that our school produces conservative students, well, my advice to her is to live with it. Not everybody is going to turn out like Hui, which is why we have politics in the first place.

And here, avers Hui, is the result of the Chicago Principles, which itself mirrors the First Amendment. Note her low opinion of our malleable students and the view that people like Steve Bannon simply shouldn’t be given a platform because they might influence students.

By following the Chicago principles, the University effectively legitimizes and encourages students who may share similar bigoted ideologies. When a Booth professor invited noted white supremacist Steve Bannon to participate in a debate on campus, President Robert Zimmer stood by the invitation, withstanding pressure from student protests outside Booth and a widely circulated letter signed by 122 UChicago faculty members urging him to rescind it. Thankfully, Bannon never stepped foot on campus, though the University certainly made their stance on hate speech clear. Acknowledging that the antisemitic, homophobic, alt-right nonsense Bannon has espoused throughout his life has some academic worth or intellectual merit is categorically absurd. For a young person with hate in their heart to see a man like Bannon espousing his intolerant views behind a podium with the UChicago coat of arms is dangerous and potentially radicalizing. For an immigrant, for a person of color, for a member of the LGBTQ+ community to see that, it is devastating, an assertion that their personhood is not natural, but something to be “debated.” When elite institutions treat people like Bannon as academics—with something to teach, with something valuable to say—it not only validates and potentially propagates such bigoted thoughts, but also signals that the University’s commitment to academic inquiry is more important than the safety of marginalized students an

Yeah, President Zimmer should have banned Bannon, for Bannon purveys “hate speech”. That should keep our students from being molded into little Nazis! (In fact, suppressing conservative speech doesn’t make it go away, it just drives it underground.) Zimmer did exactly what he should have: adhered to the Chicago Principles and refused to ban a speaker who was not violating the First Amendment (n.b., Bannon never came). See my 2018 op-ed in the Chicago Tribune, defending Bannon’s right to speak, though I despise the man: “Hate speech is no reason to ban Bannon”.  Truly, Hui seems to have no idea that students can think for themselves—that they can hear a man like Bannon, or a woman like Christina Hoff Sommers—and come to their own judgments. She wants to force them to think her way by banning speakers she doesn’t like.

The problem, of course, is that one person’s “hate speech” is another person’s free speech—speech worthy of debating. Even if you think Bannon is odious, exactly why should we censor him? And who else should we censor? And who should be the censor? It’s clear: someone who has Hui’s values. In the end, her views boil down to the old saw, “Free speech for me, but not for thee.”

Finally, Hui conflates speech that directly and predictably incites violence (Trump’s speech before the Capitol siege falls into this class)—speech not falling under First Amendment protections—with “hate speech” that doesn’t incite such violence. The conflation arises because Hui, like many on the far Left, sees speech as violence:

My peers at the Thinker may think me hypocritical, then, for wanting to reimagine free speech on campus. It is, after all, these very principles that affirm my ability to openly criticize the administration, or, say, call for the abolition of the University. But my words—radical as they may be, disagreeable as they certainly are to some—do not do any harm. They do not inspire hate or fear. In short, they have no capacity for violence. And now, more than ever, we are seeing how the latent violence wrought in language can speak (or tweet) violence and death into the world.

And so we see that Hui’s definition of “hate speech” is “speech that inspires hate or fear”, in other words, speech that some find odious and offensive. (Note that she sees words as a form of “latent violence.”)

Hui ends her piece with the “yes, free speech is good, but. . . ” trope.  Safety before speech! But I’m not aware of a single student at my University who has been physically hurt or objectively rendered unsafe by somebody else’s speech:

We’ve seen the consequences of elevating hateful rhetoric—we have seen it now in the highest echelons of power. It begins in our classrooms, where the Trumps and Cruzes and Hawleys are given the tools they need to acquire and keep power, even if it means promoting fascism and white nationalism. The next Ted Cruz could be walking through the quad right now. The future Josh Hawley might be playing devil’s advocate in your Sosc class. We can prevent such radicalization by reexamining the Chicago principles and prioritizing safety over absolute free speech.

When you hear the word “safe,” run for the hills, because censorhip is following close behind.

What I find ineffably sad about Hui’s piece is that I admire her Leftist activism, and because she’s clearly smart and committed to causes I favor. But along the way she’s come to think that the First Amendment, and the foundational principles of her own University, are not only harmful and violent, but designed to create bigots.  If our University instituted an orientation seminar on free speech and the meaning of the Chicago Principles, perhaps Ms. Hui wouldn’t have such a negative take on the foundational tenets of her own University.

I end with a question for Ms. Hui:

“Who would you have decide which people are allowed to speak at the University of Chicago, and which should be banned?”

Leave a Reply to A C Harper Cancel reply